One of the lowest-key updates in the iPhone 5C is its battery. Its 1,507mAh unit is slightly larger than the iPhone 5’s 1,440mAh battery – and the slight disparity between this and the 1,570 mAh battery could be explained by the extra tech the more expensive phone packs-in.

A larger battery does not revolutionise the iPhone’s stamina, but we were happy with the results. It’s able to survive a full day of heavy use, including around an hour of streaming video over 4G, lengthy stretches of web browsing and all notifications unrestricted.

However, you certainly won’t get two full days’ use out of the iPhone 5C unless you put in some serious battery-saving tactics. We also noticed some fairly inconsistent periods of battery drain, which we’ll put down to bugs and currently under-optimised parts of iOS that will likely be fixed in future updates.

The most basic elements of a phone are these days the least talked-about. Call quality these days is limited mostly by the ropey quality of traditional phone calls, but the iPhone 5C makes the most of it. The earpiece speaker is loud and clear, and we experienced no dropped calls during our testing.

Apple fixed the connectivity issues that a metal-bodied phone can cause, but the new plastic iPhone 5C shouldn’t really be susceptible to them at all. The phone is also fairly future-proofed in terms of its mobile internet skills. It’s a 4G-capable phone that covers 13 different 4G bands – enough to ensure compatibility with all the 4G networks coming to the UK.

There’s one serious omission we had hoped to see: NFC. After a series of rumours suggesting the iPhone series would adopt NFC, it has once again been left out.

In its place, Apple has introduced AirDrop. This doesn’t offer any of the wireless payments potential of NFC, but it does let you easily transfer information between new Apple devices using a custom implentation of Wi-Fi Direct. AirDrop only came to iPhones with iOS 7, but has been around in MacBooks for a little while.

iOS 7 also sees Apple give its music player a spruce-up. However, it’s really just a stylistic re-working that ultimately doesn’t change how the app works – it’s just a touch version of the classic iPod nav interface.

The internal speaker appears to be a similar, if not the same, model used in the iPhone 5. Five little holes on the bottom of the iPhone 5C act as the speaker grille.

It’s not a fantastic speaker, and tends to sound harsh and strained at top volume – albeit a mite less so than the iPhone 5, potentially because of its different internal structure and use of a plastic outer instead of aluminium. However, top volume is decent and at lower volumes detail is reasonable for a micro-speaker. 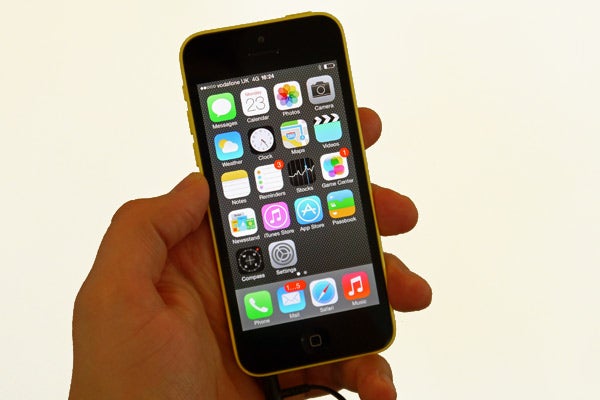 Should I buy the iPhone 5C?

The iPhone 5C is an interesting phone, but mostly because of the way it alters Apple’s product strategy rather than because of anything the phone itself does.

Aside from an improved front camera and the new plastic design, the iPhone 5C is similar to the iPhone 5. Very similar.

That’s no bad thing when considered from the perspective of what the phone is actually like to use. However, it does make the £470 price a bitter pill.

It’s a price that means the iPhone 5C has to compete directly with Android behemoths the HTC One and Samsung Galaxy S4 on the SIM-free stage, though. Both phones are available for well under £500 these days.

Of course, these are not direct comparisons. Should you buy the iPhone 5S instead of this? Despite looking a lot more serious and stuffy, the iPhone 5S is the far more interesting phone tech-wise and has a marginally – but noticeably – better camera.

It’s a good upgrade for any iPhone 4 owner who doesn’t care about the extra 5S features, but if you’re 4S owner who decided not to get an iPhone 5 it doesn’t make much sense to get a 5C.

If the difference in cost is minor, we recommend stretching for the top model.

The iPhone 5C is a replacement for the iPhone 5, designed to be cheaper to produce than that older model. There are some small improvements, such as the new front-facing camera, but it’s not a worthwhile upgrade from that phone unless you fall in love with the new colourful bodies. It’s not particularly interesting tech-wise, but the tech underneath this phone’s shell hasn’t aged enough in the last year to make this anything but a very good phone.

Find out when the iPhone 6 could be released.