The iPhone 5C and iPhone 5S are the first two new phones to ship with iOS 7, the biggest update to the iPhone operating system in its history. It’s a clear attempt to address criticisms that iOS has fallen behind rival systems like Android and Windows Phone in some respects.

iOS 7 is a largely successful update. It is a significant stylistic re-working of the iPhone software that doesn’t ruin the simplicity of the system, which is perhaps the key to its staggering mainstream success (something that’s hard to fully appreciate six years in.) 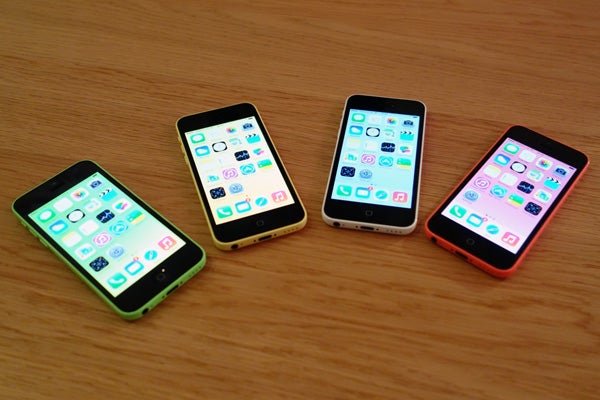 If you’re used an iPhone before, you’ll initially be struck by quite how differently it moves, compared to previous versions. The iPhone 5C’s software is all swooshy transitions, and the sense of inertia and the physics of movement play a far greater part than before.

It’s something we largely attribute to the largely positive reception of Windows Phone 7 and Windows Phone 8, which took this approach to the feel of a mobile phone operating system more seriously than ever before. And Apple’s nicked it, basically.

There are new bits clearly indebted to Android, too.

The iPhone 5C’s iOS 7 has something called Control Center that mimics some of the functions found in many Android phones. It lets you control brightness, switch functions like Wi-Fi on and off, and control music playback. You access Control Center by swiping upwards from the bottom of the screen.

It’s neat, but we still think that the updated look and feel of the iOS 7 is its biggest feature. Jonathan Ive is the man who was in charge of iOS 7. 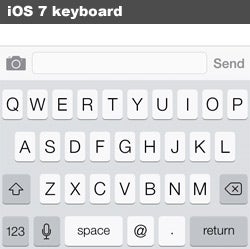 And as the bloke who also had a significant hand in the design of almost every iconic Apple product of the last 20 years, it’s no surprise that he’s a bit obsessed with questions of aesthetics.

Don’t think you like the iOS 7 look? We’ve heard many people complain about the new software, but it’s fundamentally something that’ll sink in very quickly. And if you skip back to iOS 6 after using the new software for a week, the older version does feel very dated indeed.

iOS 7 – a successful update even if many of its best bits are borrowed. For more on th iPhone 5C software, read our iOS 7 tips and tricks guide.

Take a step back, though, and you can only conclude that the iPhone ecosystem’s fortes are what they have been for years – apps and games.

There are more than a 900,000 apps live in iTunes’s App Store. And while that’s believed to be slightly less than found on Android’s Google Play, the selection of apps and games on iTunes is much better.

While there are (at the time of writing at least) some minor compatibility issues with some apps thanks to iOS 7, the iPhone 5C will be able to use just about all of them. It’s because – whisper it – this phone is almost identical to the iPhone 5.

Spec-heads may find this disappointing, but it’s good news really. Developers have been optimising games for this setup for a year now, and it’s capable of cranking out some great visuals.

However, it does mean that there’s very little reason to upgrade from an iPhone 5 to an iPhone 5C. Their level-pegging specs mean they’ll be supported by both Apple and the app scene’s developers for exactly the same length of time. 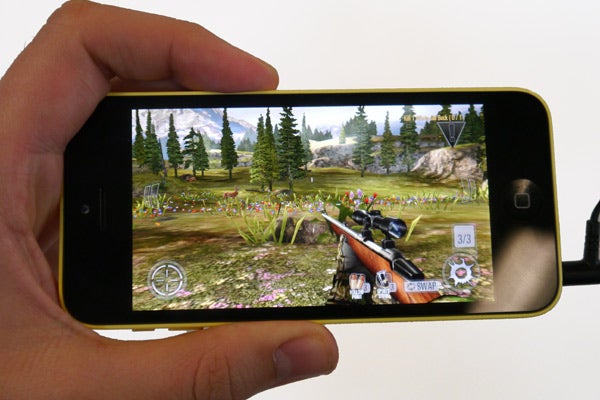 But is the iPhone 5S’s extra grunt worth investing in? The iPhone 5S costs £80 more than the 5C, and as well as the Touch ID sensor, improved camera and metal body, that gets you a new Apple A7 processor.

It’s the first 64-bit mobile phone processor, and has an improved PowerVR series 6 GPU. The Geekbench 3 benchmark shows that – while dual-core – it’s an alarmingly fast chip that flattens both the iPhone 5 and Galaxy S4.

But what does it mean in real terms? It’ll get you slightly better-looking graphics in a fistful of games and the assurance that your phone will be supported by Apple (i.e. software updates) for longer.

The question of better looking games is arguably becoming less of an issue than it used to be, as many of the biggest developers are starting to focus on free-to-play titles that rarely feature cutting-edge graphics. Few developers produce top-end 3D mobile games, as it’s an expensive endeavour that’s arguably at odds with the mobile gaming market.

However, the other issue – of long-term support – is a biggie. If 64-bit architecture is the future of iOS, the 32-bit iPhone 5C could start to miss out on new software features. We strongly doubt this will happen in the next 12 months, but if you want a phone to hold onto for 2-3 years the iPhone 5S is a better bet.