Reviewing a Musou game is always tricky. Long-serving fans who purchase each new entry will likely curse its lack of innovation and bemoan its pungent stagnation. For casuals and newcomers, on the other hand, the utterly bonkers combat – particularly when Koei Tecmo wrap it around a beloved franchise – only serves to warm our hearts for the brief time spent hacking and slashing. I find myself in the latter camp, and while there’s certainly a chunk of mud that can be flung at Hyrule Warriors: Definitive Edition, it’s hard to deny that it’s immense fun to play.

One of the highlights on Nintendo 3DS and Wii U is that Nintendo has brought together all previously released DLC and bundled it into a neat Nintendo Switch package. However, unlike other Wii U repackages to come to the company’s latest console, this is a very interesting proposition because of depending on whether you game in docked or handheld modem, the experience is entirely different.

When docked, the game runs at 1080p/60fps, while portable mode is downscaled to 720p/30fps. It’s a jarring experience for anyone who enjoys both play-styles that the Switch has to offer, and often flits between the two. Nevertheless, the console handles it admirably, with Hyrule Warriors instantly playable the second you pick it up off the dock. 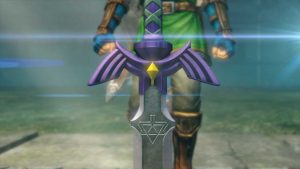 The frame rate in each mode can be inconsistent, too, particularly in congested battles and especially when a boss is involved. This is far more pronounced in portable mode, though, most likely because there are half as many frames the game has to drop, making it more noticeable. But portable mode also carries its own, bespoke issues.

Hyrule Warriors plays exactly like other Musou titles. Players will run around a battlefield as the most badass character in the conflict, swiping down hundreds, if not thousands, of insignificant enemies while completing sub- and main-objectives littered around the map.

These objectives come at you thick and fast, and it’s up to you to keep an eye on both the dialogue at the bottom of the screen and the flashing beacons on the mini-map in the upper right, to know where you and your ally playable characters should be. It’s fast, it’s frantic and it’s fun. There’s also the added bonus of being able to play co-operatively right out of the box, thanks to the Switch’s Joy-Cons.

The only downside is that in portable mode you’ll suffer a significant loss of real estate. Playing on the Switch’s 6.2-inch screen means the map is so small that it can be hard to keep track of these constantly updating events. There were multiple times I lost an objective simply because I didn’t see it. It’s a minor issue, but one extra piece of micro-management that’s added to this “Definitive” experience.

Beyond that, the combat is still very much Musou. You’ll be rushing around taking down enemies of varying degrees of rank, with little to no trouble before the big boys show up for a fight. And by show up, I do mean show up. Enemy pop-in is a common issue in this franchise, and there will be times where a whole gaggle of baddies will magically surround your hero. Since they’re easy to dismiss much of the time, it isn’t annoying, but there are times when you’re desperately chasing a mission on the brink of failure and this will impede your progress just enough to mean the mission is over – at which point it’s tiresome. 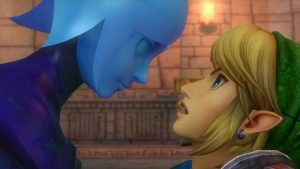 But just because most enemy conflict is easy, that doesn’t mean that the mechanics are simple. Progressing through the campaign and collecting materials across the battlefield allows for more badges to be purchased for each character – of which there are 29 in all, each enjoyably varied and unlocked at a steady pace to keep things feeling fresh – which in turn unlocks more extensive combos as well as improved defence and exploiting of enemy weak points.

You’ll also unlock new weapons along the way that have buffs and can be forged with other weapons to make better equipment. It’s a system that you can either deep-dive into or give only a passing glance, since the effects on the battlefield can be negligible in a system where one attack can wipe out ten enemies.

There’s no arguing, either, that it’s an awful lot of fun to switch off your brain and run around a map dicing up a load of enemies. This is especially true when the enemies and heroes are from an iconic series close to your heart. Koei Tecmo has done an admirable job of tying its gameplay mechanics in with the fundamentals of Zelda. Bringing in many familiar faces and making them all fit in this bonkers system means that nothingfeels out of place, and you can just crack on taking on these foes to your heart’s content.

One piece of advice would be to take advantage of the Switch’s ability to play at your time and pace, and use Hyrule Warriors sparingly. It almost fits to be played as a mobile title and ‘wait’ between missions to avoid Musou fatigue. Playing any more than even two missions at a time can lead to Warriors’ limited formula quickly growing stale, and you may soon grow hungry for something with a little more depth. But in fits and spurts, it’s absurd fun. 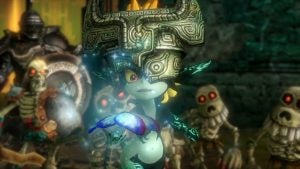 Whether you’re an avid Zelda fan or casual Warriors player, there’s something for you to love here. The Switch is the perfect console for a Musou experience since this game is best enjoyed in short bursts; prolonged spells almost reveal the secret of its magic, leading to a more laborious experience.

For jaded veterans there’s little here to bring you back to the frontlines, but this is most certainly an excellent pairing of two iconic franchises that’s handled very well. And if you missed its first release, you have no excuse to miss it again.