What is the Hyperkin Retron HD?

We all know about the NES Classic Mini, Nintendo’s short-lived, plug-and-play clone of the famous 8-bit home system that revived the fortunes of the video game industry, and turned the Japanese company into a global powerhouse.

However, that particular device had serious limitations (outside of its being impossible to find in stores); it only came with 30 games and didn’t have any support for original NES carts or NES controllers.

The Hyperkin Retron HD aims to fix that. It’s an unofficial clone of the NES which not only has a cartridge slot and two ports for pads, but also outputs in 720p via HDMI which is something other cheap clone systems have lacked in recent years. At just £50, it’s also competitively priced, and comes with a great replica of the original NES pad to boot.

If you didn’t know better you’d assume that the Retron HD was an authentic Nintendo product, such is its uncanny similarity to the iconic NES. Hyperkin has used many of the same visual reference points for its replica console, such as the grille-like texture on the top and almost identical power and reset buttons.

On one corner is the Hyperkin logo, which illuminates nicely when the console is switched on. On the back of the unit there’s an array of inputs, including power, HDMI out and AV out, as well as a switch to change the aspect ratio of the on-screen image. Flip the unit over and you’ll find another switch that allows you to toggle between NTSC and PAL TV standards, this ensures that the machine has compatibility with cartridges from all over the world. 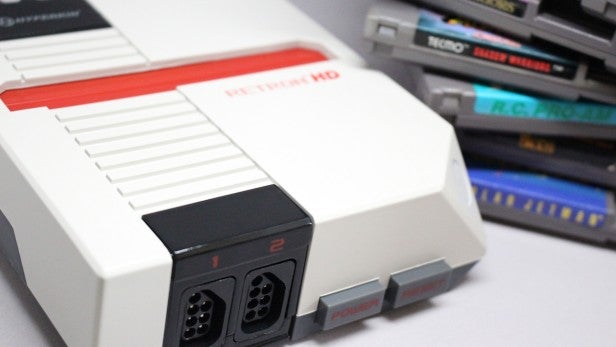 The Retron HD is small and solidly built, but it’s very light. There are only two circuit boards contained inside, one of which houses the “NES on a chip” which replicates the performance of Nintendo’s famous system. The other board takes the information from the main board and turns it into either a HD signal or a composite one. Hyperkin could arguably have made the console even smaller than it already is were it not for the need to include that all-important cartridge slot.

Also included with the Retron HD is Hyperkin’s special “Cadet” controller, which is heavily inspired by Nintendo’s original hardware. Aside from the bevelled edges on the corners, it’s a close match for the real thing in terms of size, weight and overall quality. The buttons and D-pad feel nice and responsive, and the cable is 10 foot long so you don’t have to sit right in front of the TV, as was the case with the NES Classic Mini. Because the controller ports on the front of the Retron HD are exactly the same as those on the original NES, you can use your existing NES pads, too.

Related: Super Nintendo Classic – everything you need to know 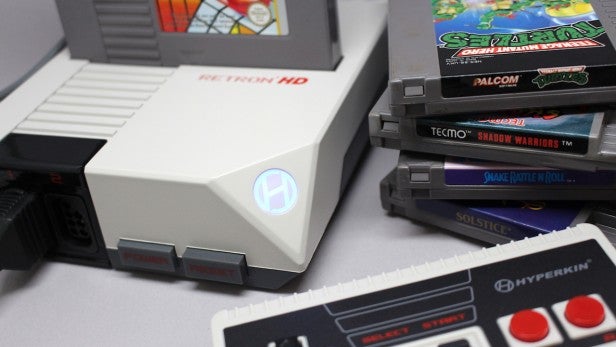 Power is supplied via a 6ft Micro USB cable, which has to be plugged into a USB socket (your TV may have one) or a USB power adapter, like the one you get with your average smartphone. No power adapter is included in the box but most households have plenty of these laying around so it’s not a massive issue.

The most obvious selling point of the Retron HD is that it can play your original NES carts on it – something the NES Classic Mini isn’t capable of. If you have a sizeable collection of existing games then this is a real boon – especially when you consider that these can be played in 720p HD. The original NES can only output in standard definition, which looks utterly terrible on modern LCD tellies. If you want a more old-school experience then you can use the Retron HD’s composite AV connection.

The standard of emulation seen on the NES Classic Mini was very high indeed and unless you analysed it very closely, you wouldn’t be able to tell it apart from the real thing. Sadly, this is one area where the Retron HD stumbles slightly. While the gameplay is smooth enough and there are no noticeable issues with framerate, colours look a bit odd in some games and the audio is noticeably different in others, with percussion effects coming across as slightly muffled. Despite the use of a 720p signal, the visuals are little blurry in places, too – it’s certainly not as clear an image as what the NES Classic Mini is capable of producing, and that’s a real shame. 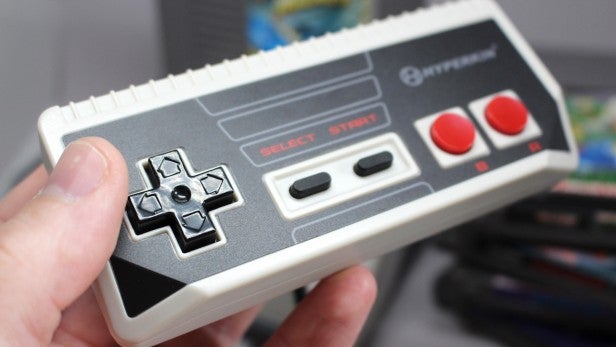 These shortcomings are no doubt a result of Hyperkin using the same “NES on a chip” variant which has been doing the rounds for the past few years, and while they’re not deal-breakers when it comes to actually enjoying these games, purists will nevertheless be dismayed at the glaring inaccuracies.

For a truly perfect replication of the NES’ abilities you have to dig deep – the Cyber Gadget Retro Freak and Hyperkin Retron 5 fare better, but both use software emulation and are therefore susceptible to inconsistent performance. Analogue’s NT Mini is the undisputed king of NES clones, but it costs £350. When you consider that the Retron HD retails for just £50, the negatives are a little easier to stomach.

Should I buy the Hyperkin Retron HD?

While there are undoubtedly better NES clones on the market right now, all of them cost significantly more the Retron HD. It may not offer the most accurate experience but it outputs 720p HD, comes with an excellent controller, accepts your dusty old carts and costs less than the original retail price of a NES Classic Mini – a price which is almost irrelevant as Nintendo’s clone is impossible to find at retail and now sells for many times more on the secondary market. If you have NES carts, want to play them on your HDTV and are looking to get the cheapest possible option, then the Retron HD is well worth a look.

Those of you who have had your interest piqued by the NES Classic and don’t mind heading to eBay to pick up some old games should also check it out, rather than paying through the nose for Nintendo’s clone from an unscrupulous scalper. If you’re a NES veteran who’s a real stickler for accuracy and doesn’t mind spending a massive wad of cash on getting the best possible experience, then you should probably investigate one of the more expensive alternatives.

Thanks to Funstock for supplying the Hyperkin Retron HD used in this review.