The Nintendo Classic Mini should be this Christmas’ must-have gaming console. It’s a perfectly designed miniature box that’s sure to fill us oldies with the warmest nostalgia. It will be accompanied by a selection of games that includes some of the 8-bit era’s greatest hits recreated in their finest form. For me, it’s the ideal console. However, a series of inexplicable design choices sees Nintendo once again standing in its own way of achieving perfection.

What is the NES Classic Mini?

The NES Classic Mini is a miniature version of the 1983 Nintendo Entertainment System. The £50 console includes 30 of the hardware’s greatest games installed on it (you can’t expand this lineup with any more games, unfortunately) and is supplied with one controller. You can buy additional controllers separately.

Here are the games that are included: 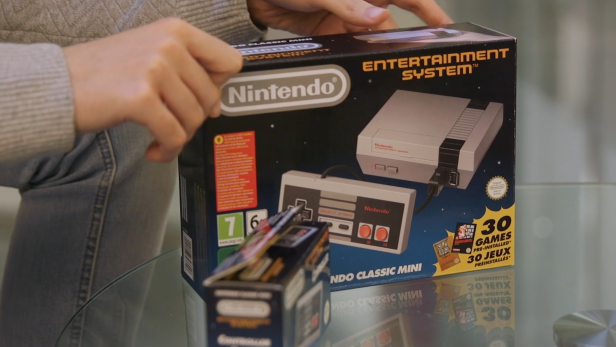 There will be some debate about the games that didn’t make the list (Teenage Mutant Ninja Turtles, DuckTales and Batman, for example), but there can be no debate about the fact that this list is excellent.

NES Classic Mini review – Is it any good?

The announcement of the NES Mini console was my highlight of 2016. To have the console that initially sparked my interest in video games as a child available once again, in minuscule form and with some of my all-time favourite titles, all for a bargain price and just in time for Christmas – how amazing.

Looking at the console, Nintendo has done an amazing job recreating the look and feel of the old hardware. The plastic of the NES itself feels exactly as I remember it. The controller has that slightly grainy matte-black front with the satisfyingly clicky A and B buttons. The console and controller are everything I hoped they’d be in terms of both look and feel.

The game library on offer includes some games that, personally, are the reason I’m writing this review. I started playing video games when I was three years old. The very first game I played was Mario 3, and I’ve been playing it ever since. Mega Man 2 is another firm favourite, which I’ve played for the past 23 years. Seeing them emulated in the best form they’ve ever been is genuinely heartwarming.

The UI of the Mini does some smart things, too. Each of the 30 games allows for four different save points, ideal for players either looking to make these adventures a little less punishing than they were in the 1980s, or for experts looking to perfect speedruns. No longer do you have to worry about deleting your dad’s save because you fancy a game of Contra.

Also, whenever you back out of one game and want to select another, the console will “hold” the save state should you wish to save it, before selecting a new game. If you start a new game without saving the suspended state, then it will be deleted, but it’s a good way of nipping into the main menu to make changes to the display, too. You can also “lock” certain saves to avoid them being overwritten. 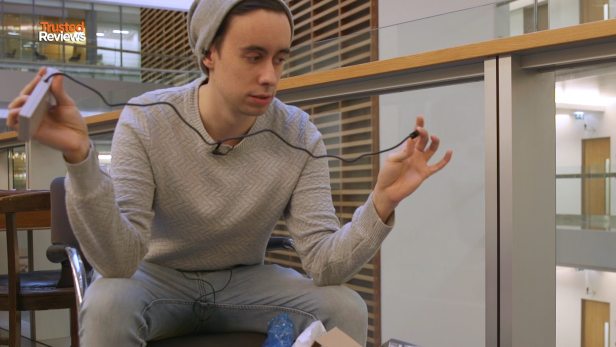 However, the one downside is that to suspend play of one game you have to physically press the reset button on the console. I don’t see why a simple press of the start and select button on the controller wouldn’t suffice.

You can play games in three different display modes: 4:3, “pixel perfect” or the classic CRT mode featuring the beautifully old-school scan lines. Other CRT modes tend to give me eye strain – in the Street Fighter 3: Third Strike re-release, for example – but Nintendo has done a masterful job of creating an old-school display that isn’t only pleasing on the eye, but also a joy to play.

It does an excellent job of mimicking the feel of playing on a old TV – and that’s exactly what I want.

Once the NES Mini is set up and I’m playing one of its games, the console is absolutely perfect. The trouble lies in the setup, and its execution, which is the result of some inexplicably bad design choices.

First up is the controller. While the controller itself is brilliant, it only has a 30-inch (76cm) cable. This means that I literally can’t plug it in and sit back without yanking the console towards me – which is ridiculous. I tried setting up the NES Mini with TVs in multiple spots around my home and it proved impossible. I had to resort to using a PC monitor. The only option for those looking to play on a TV is to use a super-long HDMI cable, with the console on the floor right in front of you.

This is a console that originally launched in the era of 15-inch CRT TVs, but has been redesigned in a generation of wireless technology. The inclusion of wireless controllers should be a given, and it’s shocking that it isn’t an option. It may be true that the exclusion of wireless keeps the price of the console down, but this comes at the cost of usability and practicality.

Despite its continued brilliance, Nintendo manages to be the games industry’s Sir Mix-a-Lot: it loves big buts. It has designed an amazing retro console – but it’s unplayable in most living spaces thanks to painfully short controller cables. It has a selection of 30 amazing games – but that’s all you get from an era that had literally 100s of titles. It’s only £49 – but it doesn’t come with an AC power adapter; Nintendo played a similar trick with the DS XL, which didn’t come with a charger.

These head-scratching decisions are so frustrating because, once I start playing the NES Mini, it’s everything I want from a games console.

I know that when my child is old enough to start gaming (about eight months old, I reckon), this will be the first console I give them. I want my kid to experience the amazing games I first did, and thankfully they’re all in the Mini. 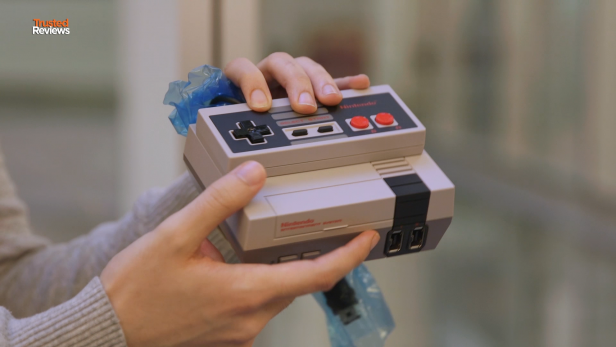 The only issue is that it’s likely to have a negative impact on my kid’s eyes because their nose will have to touch the monitor (not the TV, as I can’t set it up on the TV) to play it.

The NES Mini could so easily have been perfect, and it absolutely should have been. An adorable little box that includes the original Mario trilogy, Mega Man 2, Pac-Man and other greats, all looking absolutely stellar for just £50. The controller, too, feels as superb as the original.

So it’s inexplicable that the console is pretty much impossible to be set up on a TV, as a result of a short controller cable that uses a bespoke plug and a power cable that’s equally short, and which doesn’t come with its own power adapter.

It seems that in making the Classic Mini we also get Classic Nintendo: so close to perfection but a few bizarre design choices leave us pondering what could have been had the company pushed the budget just a touch further. I’d have paid double the asking price if it gave us a little extra length, or even the length of the original NES controller’s cable.

As it stands, it’s bizarre to encourage couch co-op when the Nintendo Classic Mini can’t even reach my sofa.