Coming autumn 2014 for PC and undisclosed consoles
Announced just before the start of E3 2014, Hunt: Horrors of the Gilded Age is a co-operative third-person shooter and the brand new IP of Crytek USA. This freshly formed studio includes staff members that have emerged from the dust of Darksiders developer Vigil, which disbanded after THQ went bust.

It certainly has promise then, thanks to the strong team behind it. But will it live up to the expectations laid out by the developers’ previous creations?

Crytek was showing some pre-alpha footage of the game off in private rooms at E3, showcasing gameplay from the game, which has been in development for over a year. 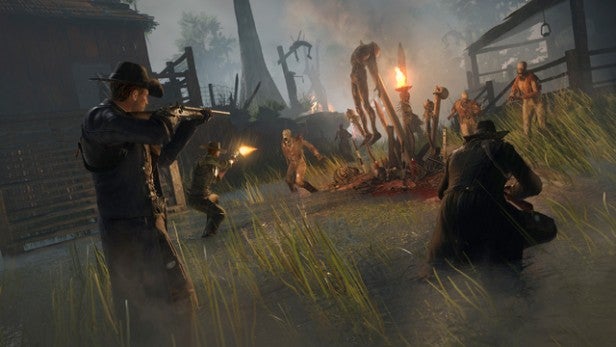 Hunt is a co-operative action RPG for up to four players, with each playable character having its own unique identity. If that sounds like Left 4 Dead, you’d be right. When watching the gameplay footage – Hunt isn’t playable at this stage – our initial thought was that this is a game that has been strongly influenced by Left 4 Dead, but this game is set in the 1800s at the turn of the ‘Gilded Age’.

From what we’ve seen so far, it doesn’t look like you’ll need to heavily rely on teamwork to complete quests though, as often other characters were killed in action with little or no time for other players to respond to their cries. At least with Left 4 Dead you could revive a downed character if you reached them before all their health dwindled away or the enemy went in for that final blow.

Taking another leaf from Left 4 Dead’s book, Hunt places previously deceased characters in precarious positions after the next save point. For example, one character was strung upside down and hung on a hook at the side of a marsh land. From this vantage point, the person in control of that character could survey the upturned world as his friends battled to clear a path to him, much to our amusement. 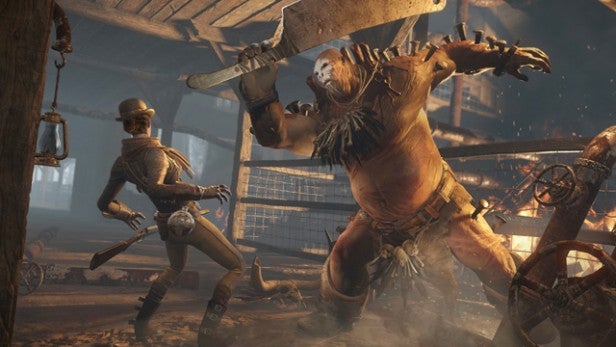 Crytek’s new third-person shooter features a selection of mythical enemies, ranging from speedy undead ghouls through to larger brutes and boss level monsters like the witches. As with Left 4 Dead, the characters will be required to work as a team to battle through each level, which feature distinct mission checkpoints, providing a breather from all the action.

On that note, Crytek has also added a peak mechanism that lets players hide behind cover, such as behind the door of a house, and peer through gaps to survey the action from a safe vantage point. No doubt this will come into play more in the full game, potentially with the campaign featuring stealth missions.

From the looks of it you’ll be able to battle using a wide array of weapons. We saw a small, one-handed axe as well as a double barrelled shotgun shown off during the demo, but there were glimpses of other weapons including a flamethrower to play with as well.

Crytek is to implement some slowed-down cutscenes for the finishing blows dealt to enemies in the final game. These were demonstrated a little, especially with the small axe, but they lacked the brutality of upcoming games like Mortal Kombat X or other more bloodthirsty titles.

Although this may be down to the pre-alpha gameplay footage, the bloodwork of Hunt isn’t get very realistic, with the bodily fluid lying in bizarre brown patches on the crowd. No doubt this will be fixed as we edge closer to the game’s release date, but it was rather jarring against the rest of the gameplay. 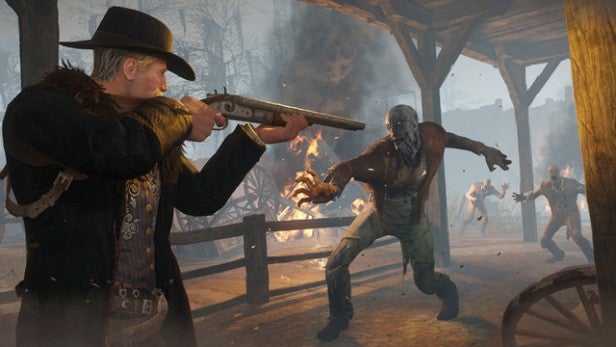 Crytek’s beautiful lighting and water effects are encouraging, though. The level we were shown took place in a camp site with wooden huts and burning camp fires, accessed by the team trudging through watery marshlands.

Despite this being very early stage of development, water effects were on-par with those of Tomb Raider: Definitive Edition and Battlefield 4. The way the light and the smoke from the fires interplayed in the camp site as well was definitely demonstrative of the graphical prowess the game will offer when it is made available later this year.

It’s interesting that Crytek and 2K with Evolve have similar co-operative titles arriving at similar times in autumn 2014. Hopefully they’ll be enough to separate the two, as I have high hopes for Hunt: Horrors of the Gilded Age.

Although what we saw at E3 was pre-alpha footage of the game, Crytek’s new third-person shooter certainly has the potential to be a great co-operative multiplayer shooter to follow the likes of Left 4 Dead. However, whether it’ll offer enough new content to stand out from 4-on-1 shooter Evolve, we’ll have to wait and see.