Available on PS4 (reviewed) and Xbox One
You might think of Tomb Raider: Definitive Edition as a next-gen port of last year’s Lara Croft reboot, but Square Enix considers this Tomb Raider the definitive version: the ultimate edition that shows the game at its very best.

Thanks to sterling work from Crystal Dynamics and two conversion teams – Sleeping Dogs developer United Front on Xbox One and Nixxes on PS4 – Definitive Edition sounds like it deserves the accolade. The only questions are how the adventure holds up nearly one year on, and whether it’s worth buying if you’ve already played through it.

What’s new with the next-gen version? In truth, not a lot. We get a new hidden tomb near the start of the game and some alternative costumes and multiplayer maps bundled in. Otherwise this is fundamentally the same game with the same single-player campaign.

It begins with Lara struggling to survive on an inhospitable Pacific island, and then chronicles her journey from ingénue archaeologist to action heroine as she faces depraved cultists, supernatural forces and fearsome terrain. 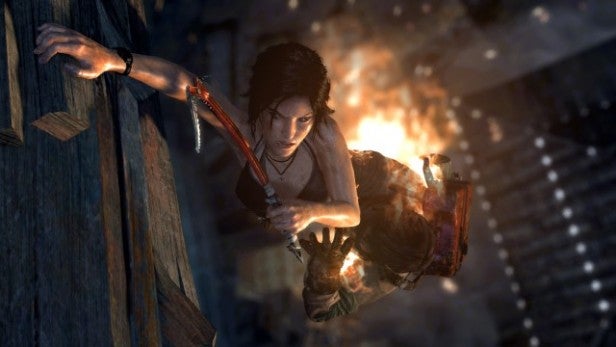 Being the same isn’t necessarily a bad thing: the reboot worked last year and it still works now. We can criticise it for its over-reliance on cinematic quick-time events in the early sections and shooting gallery combat in the later part, but it still packs in the thrills, spills and scares, along with stretches of superb jumping and clambering exploration and a feast of big action set-pieces.

Whether it’s your first or second go, you might also notice how the game mixes linear storytelling with real player choice. While you’re always being dragged from one event to the next, the island opens up as you move through, and there are always options to return to previous areas with new equipment and discover items or areas that were previously blocked off.

While this might break up the flow and make little sense in such a fast-paced narrative, it’s well worth tracking down the collectibles or raiding the optional – and more puzzle-packed – hidden tombs. Meanwhile the main game does its bit to reward new strategies, giving you the chance to play stealthily or go for all-out blasting, with enough exploding barrels and flammable areas to make the environment work for you at times. 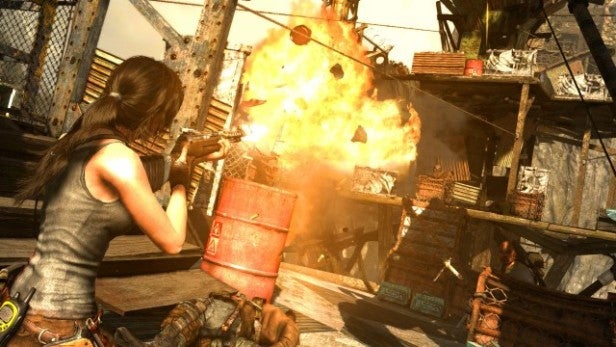 True, some of the ideas are under-exploited, particularly the hunting and survival aspects that are introduced early on, but there’s no shortage of stuff to find, stuff to collect and extra goals to complete. This makes Tomb Raider an enjoyable game to return to, and more exciting than you might expect. If, like us, you loved Tomb Raider before, then there’s little doubt that you’ll still love it now. For every part that’s annoying – later battles – or ridiculous – Lara’s antique-collecting side-quest – there’s an awful lot that’s just sublime.

The question is whether it’s worth replaying on a whole new console – and paying £40 to £45 for the privilege.

You can now pick up the old console versions for under £15, or the PC game for under a tenner. The main advantage of the Definitive Edition is a visual overhaul. Xbox One and PS4 owners effectively get an enhanced take on the already fantastic-looking PC version, with the ‘Tress FX’ hair animations in place and working better, high-resolution textures and 1080p output, all running at 30fps on the Microsoft console and an unlocked 30 to 60fps on the PS4.

At first the differences seem minor. The hair effects still aren’t entirely convincing, though there’s a lot more movement in a breeze, and a shell-shocked Lara with a more realistic dirt and gore-streaked face isn’t a huge advance on the older Xbox 360 and PS3 model. 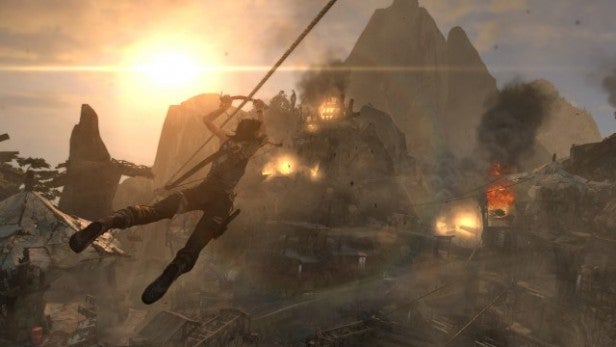 Pay attention, though, and you soon notice a whole lot more. The combination of more – and more animated – vegetation in the outdoor areas helps make the island setting come alive, with swaying grasses and trees everywhere you look. Dynamic lighting and particle effects add atmosphere and tension to creepy torchlit tombs and burning buildings alike. Wind, rain and snow effects are noticeably more dramatic, while the lighting seems richer and more vibrant. The overall level of detail is frequently amazing, and few games offer outside vistas as sweeping and beautiful as this one.

And when the game zooms in on Lara, with her remodelled face and all-important sub-surface scattering effect on her skin, it can produce some breathtaking results. The gap between the extraordinary graphics and the stilted facial animation lends Tomb Raider a touch of the uncanny valley, but it still looks dazzling. At its best, Definitive Edition does a great job of making one of the best-looking HD era games look even better. 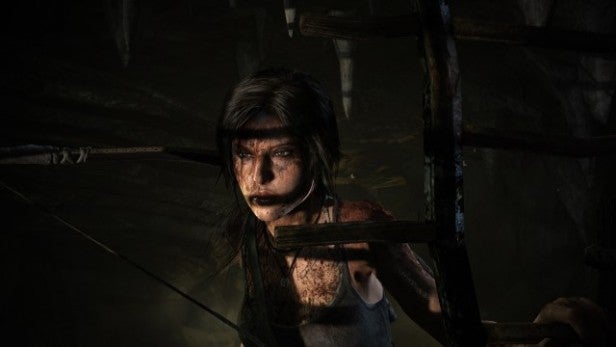 Other next-gen enhancements might not be so welcome. On the PS4 version tested you can use a headset microphone or PS4 camera to use voice commands, but there’s not really much reason to say ‘bow’ or ‘rifle’ instead of pressing the appropriate button, and the game has a nasty tendency to pause or switch weapons when you don’t actually want it to. Tomb Raider also routes some sound effects to the Dual Shock 4’s built-in speaker, but rather than extend the feeling of immersion, we’d say this actively spoils it.

Unplug your camera and turn off that effect, and you have a fantastic version of an excellent game. We’d like to see more puzzles in the next Tomb Raider title, and ones not restricted to the optional tombs, but this is the first modern Tomb Raider game to match Naughty Dog’s work with Uncharted – and in some ways occasionally surpasses it.

But here’s the rub. If you have an Xbox One or PS4 and you’ve yet to play Lara’s latest, now’s your chance. This is one of the best games on the new consoles. If you have played through already, though, then you’d have to be a huge fan to pay 40 odd pounds just to play it again.

It’s not that it’s not worth the money, or that we haven’t enjoyed a second soujourn to the Dragon’s Triangle, but with so little actual new content wouldn’t you rather save your cash for a whole new game?

Check out our round-up of the best Xbox One games