Available on Xbox 360 (tested), PS3, PC
The worst thing you can say about Darksiders II is that it’s not exactly innovative. It was a charge laid at the original, which somehow found an unsuspected middle ground between God of War and Legend of Zelda, and it’s a charge that will be repeated against the sequel, which repeats the same trick then throws in great chunks of Diablo, Prince of Persia and Shadow of the Colossus for good measure. Does it matter? No. If a game is going to copy then we’d rather it copy the best from the best, and it takes real talent and passion to make it work as well as it does here. Unlike so many of last year’s over-hyped, underwhelming games, Darksiders II consistently delivers beyond your expectations and actually gets better the longer it goes on. Call it a Zelda clone if you must, but it’s one of the best Zelda clones we’ve ever played. 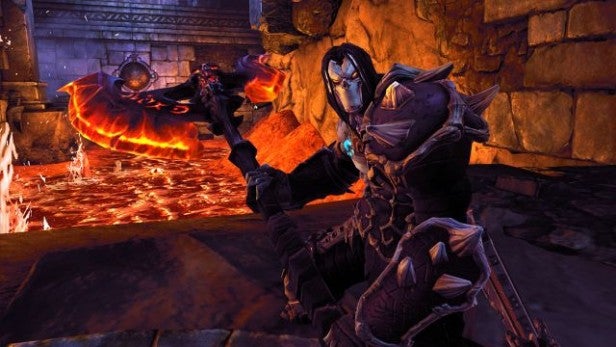 Death Rocks!
Darksiders II works as a kind of side-story to Darksiders, which saw everyone’s favourite horseman of the apocalypse, War, accused of jumping the gun and wiping out mankind. Following mucho adventuring and ass-kicking, it was all revealed to be part of a grand cosmic conspiracy. The sequel features War’s close compadre, Death, on a mission to make repairs for poor War’s supposed crime by returning humanity to the living world. It’s a story that will take Death to the Forge World where the elements of the universe were created, and to other worlds beyond, tackling a series of Zelda-like dungeons connected by a larger, semi-open world map.

The basic elements of Darksiders remain: exploring the dungeons and solving a range of puzzles, as Link might in Zelda, and battering hordes of monsters into submission as Kratos might in God of War. The dungeons start off fairly simple, with a whole lot of rolling blocks onto circular switches, but scale up nicely with the addition of stone automatons, a Hookshot-style grapple and a selection of other goodies. The combat, meanwhile, sticks close to the fast-paced, brutal, combo-heavy style of God of War, with the emphasis on timing, evades and the tactical use of special abilities. While it’s not as technically complex as a Ninja Gaiden or Devil May Cry, we’d recommend that those without a penchant for challenging action games dial the difficulty down: combat in Darksiders II can get seriously tough. 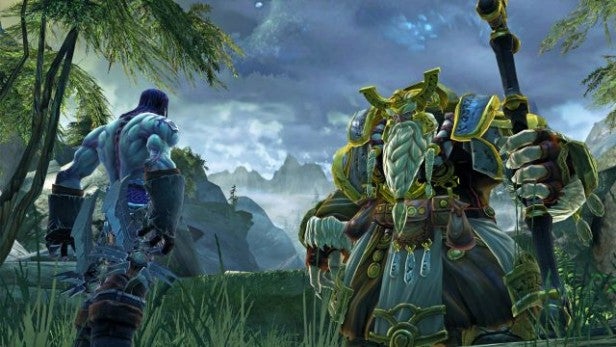 For the sequel, these twin pillars are joined by two more. Firstly, there’s a new focus on platforming. While Death lacks War’s bulk and armour, he’s a faster and more lithe protagonist, specialising in the sort of wall-running, pillar-grabbing, beam-hopping action you’ll be familiar with if you played the Prince of Persia: Sands of Time trilogy. The controls are slick and the environments designed around Death’s moves, and it’s surprising how well the platforming and the more Zelda-like exploration mix.

The Power of Loot
Even more importantly, Darksiders II has gone bonkers for Diablo-style loot. Most games of this ilk stop at a choice of weapons, or maybe a shield or suit of armour, but Darksiders II allows you to customise Death’s armaments and every part of his apparel, picking and choosing from a constant flow of new arms, bracers, greaves, wrappings, trinkets and the like. You can’t even smack a bunch of creepy lizard-beasts without them spewing out a warhammer or some vambraces as they die. There are dozens of variations, and picking between them is practically a game in itself. Death’s main weapon – twin scythes – come in a range of fruity flavours, and can be backed up with a selection of hammers, axes, claws, glaives and maces. Best of all, grab a possessed weapon and you can sacrifice other weapons to it, levelling it up and adding capabilities. In Darksiders II even the armoury has a skill tree. 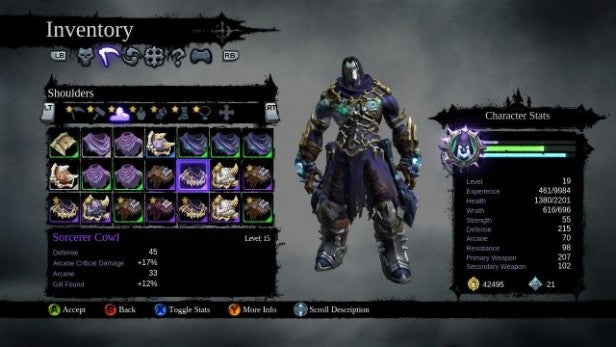 Death, needless to say, has his own, starting with two branching sets of abilities that you can unlock as the grim reaper levels up, adding new attacks, new defensive moves and perks or more terrifying and powerful supernatural allies to call in on your behalf. Levels and skill points arrive fast enough to make you feel your powers are building, but not so fast that you can pick every skill and max them all out in the course of the game. In short, it’s up to you to choose what kind of Death you want to be.

This all adds another layer to what already is a very compelling game. Darksiders II doesn’t have the most distinctive dungeons or the best-designed baddies ever made. Its story is good, but hardly mind-blowing, and its connecting worlds don’t have the character or varied side-quests of a Zelda. Yet it’s a very hard game to put down. One dungeon seems to lead to the next, and then you’re given a new toy to try out, and then you start wondering whether said toy can open up the blocked chamber you spotted earlier on. It’s beautifully paced, moving from puzzle-solving section to fraught mass battle to platforming sequence so that you’re always kept engaged, and there’s always something new around the corner to keep you hooked. The game just flows. 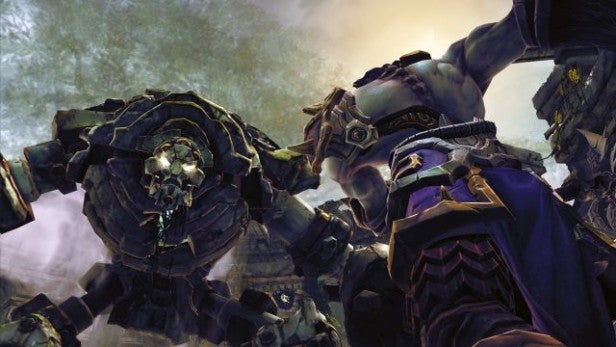 What’s more, Darksiders II has pinched one of God of War’s best tricks – starting big and only getting bigger. The boss battles you’ll encounter early on are nothing compared to the boss battles you’ll be taking part in later, as the game scales up from simple Zelda-like confrontations to the kind of epic scraps you’d find in Shadow of the Colossus or God of War III.

And it’s all carried by an equally epic presentation. Like Darksiders, Darksiders II has a cartoon, comic-book style, but that description doesn’t really do justice to graphics that remind you at one minute of a Frank Frazetta Conan book cover, the next World of Warcraft and the next Jack Kirby’s work for Marvel. The grand structures, forts and temples are piled high with intricate stonework and lavish detail, and all the characters have weirdly exaggerated features in a way that seems to fit their personality. The score is equally dramatic, and the voice-work is consistently good. Darksiders II might not be innovative or original, but it could never be described as generic. 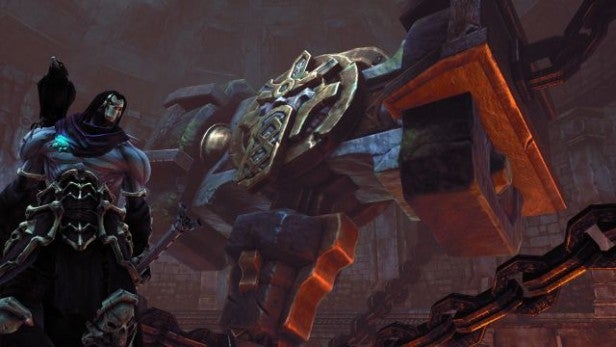 We Love Darksiders II
By now you’ve probably got the picture: we love Darksiders II. We really do. All the same, it does have a couple of flaws we feel professionally bound to point out. For instance, there are times when the camera simply doesn’t quite work. You can always change the angle with the right thumbstick, but you’ll find moments where the view won’t zoom out far enough, when it jumps when you’re trying to, or when you can’t see the vulnerable point you’re trying to hit on a vast boss monster because the camera won’t put it in view. There’s also a tendency to over-egg some running battles, in the weird belief that if surviving one hugely powerful stone sentinel by the skin of your teeth was fun, then fighting two more straight after must be even more so. It isn’t.

But then Darksiders II makes up for a lot through sheer generosity. Not only is it packed with features, loot, options, skills and powers, but it’s a big game too, threatening to finish after seven to eight hours, before revealing that – actually – you ain’t seen nothing yet. There are dozens of hidden chests to open and collectibles to discover, and the Diablo-elements should make it more rewarding than most action games if you’d fancy playing through twice. It’s a game you want to last, and one that does. 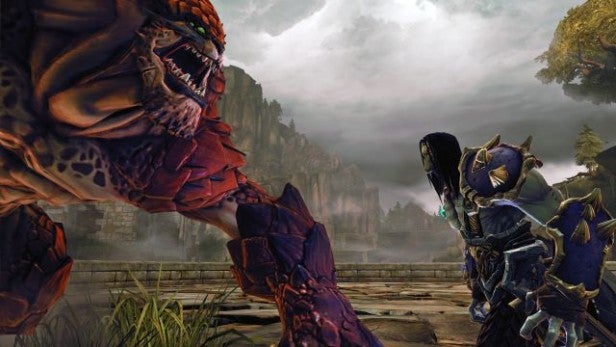 So Darksiders II isn’t innovative, but so what? If you love classic games, love God of War and love Zelda, then it’s a very easy game to recommend. War turned out to be great, and Death is even better. Frankly, Fury and Strife (we’re guessing nobody wanted to play Famine and Pestilence) can’t come soon enough.

Verdict
If Darksiders was God of War meets Zelda the sequel is the same with added Diablo and a dash of Prince of Persia. Still, if it’s hardly original, you have to admire the skill with which this cocktail has been mixed, and the enthusiasm evident in every part of the game. Darksiders II sometimes struggles to match its inspirations, but it’s a huge, impressive and always entertaining adventure, and one of the best experiences we’ve had in games this year.