What is the HTC One Mini?

In the battle of the ‘mini’ smartphones, the Samsung Galaxy S4 Mini vs the HTC One Mini is the key battleground.

As the name suggests, the HTC One Mini is a smaller version of the Android phone great and TrustedReviews favourite the HTC One. The One Mini has a 4.3-inch 720p HD screen and retains the same aluminium chassis with ‘zero gap’ construction. It also packs the same Ultrapixel camera and runs on Android 4.2.2 out of the box.

At £380, it’s more expensive than the Galaxy S4 Mini (£350) but it’s some way off the £500 price tag you’ll need to pay to prise a HTC One off the shelves. Does the HTC One Mini offer enough of the ‘One’ experience, or is it one smartphone to give a miss? Read on to find out if this is the best 4.3-inch Android smartphone to buy.

Available in Glacial Silver and Stealth Black, it’s pleasing to see HTC use the same excellent build and ergonomics that we praised the HTC One for. From the smoothly curved back to the dual stereo speakers, the HTC One Mini is a virtual clone of the One in the looks department.

Compared to the 9.3mm-thick HTC One, the One Mini is marginally slimmer at 9.25mm. It’s not as slender as the Samsung Galaxy S4 Mini (7.9mm) by some distance, though. Weighing in at 122g it’s lighter than the 143g HTC One but is still heavier than the S4 Mini, which weighs 107g. The room made for the Boomsound speakers above and below the screen means the 133mm tall One Mini requires more of a stretch to reach the top of the screen in one hand, but it’s not a real problem. 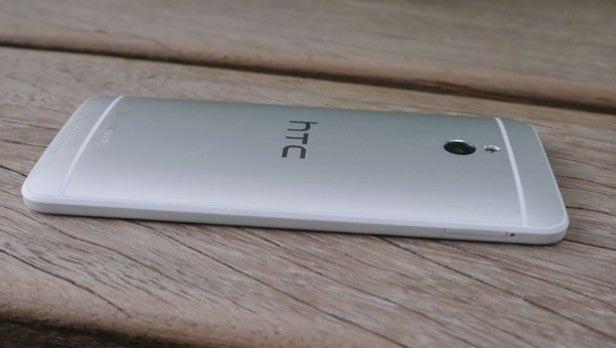 There are some subtle design differences to distinguish between the One and the One Mini besides the screen size. The metal volume rocker still sits on the right edge but it’s now split into two separate buttons. The plastic sandwiched between the back and the screen is also much thicker than it is on the One. It sticks out a little way from the aluminium frame. It’s very noticeable looking at the device straight on, but it does make the One Mini nicer to grip.

The flash on the back sits above the camera sensor, taking the place of the thin white strip on the One. This signals one of the first feature casualties – the One Mini does not have NFC.

Minor differences aside, the HTC One Mini sits comfortably in the palm of the hand and disappears into the pocket with ease. It’s as pleasurable if not nicer to hold as its big brother and despite the smaller screen still feels like a perfectly weighted smartphone. 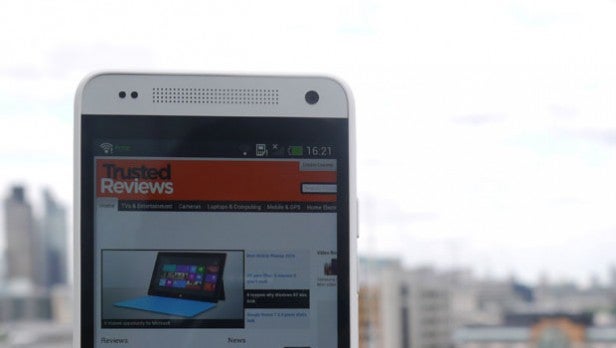 Dropping down from the 4.7-inch Full HD screen on the One, the One Mini hosts a 4.3-inch 720p HD display. That puts it in the same screen estate bracket as the Galaxy S4 Mini and the Nokia Lumia 900. Crucially, it boasts a substantially a more impressive 1,280 x 720 screen resolution.

It doesn’t quite replicate the One’s deep blacks or crisp image quality, but the One Mini screen still does a fantastic job. The 341 PPI wipes the floor with the S4 Mini (256PPi) in terms of clarity levels and surpasses the iPhone 5’s 326 PPI as well.

HD movie trailers on YouTube and web pages look sharp and vibrant. Viewing angles are great and it’s bright enough to use in sunlight outdoors. It’s the best screen we have seen for a ‘mid-range’ smartphone by some distance.

Next
Software, Performance and Camera Review