The price sits in a similar ballpark to the competition while presenting exactly what you’d want from a high-end gaming keyboard. Granted, it has some aesthetic gripes and a few glaring omissions, but the HP Omen Sequencer remains a stellar bit of kit.

What is the HP Omen Sequencer?

The Omen Sequencer is an absolute beast of a keyboard, immediately cementing itself as a welcome member of HP’s family of gaming peripherals. Boasting optical switches with a “speed you can feel”, according to HP, the sequencer feels immediately intuitive to use with its host of cool aesthetic features that compliment the rest of the Omen range.

Other gaming keyboards, such as the Razer Huntsman Elite, also support these new-fangled optical switches while simultaneously giving the Sequencer a run for its money. However, are they enough to help this device stand out from the crowd? After spending a week with it, it’s time for us to find out.

The HP Omen range of gaming products has already impressed with the Omen Reactor, a gaming mouse that boasted a healthy mix of striking visual hallmarks and a decent number of mechanical features. The same praise can be lauded upon the Sequencer.

First up, it’s far heavier than your usual gaming keyboard. So much so, that hurling this into a nearby window would likely do some damage. While offering a sturdy foundation for the keys to rest upon, the base is an unattractive part of an otherwise luscious keyboard. 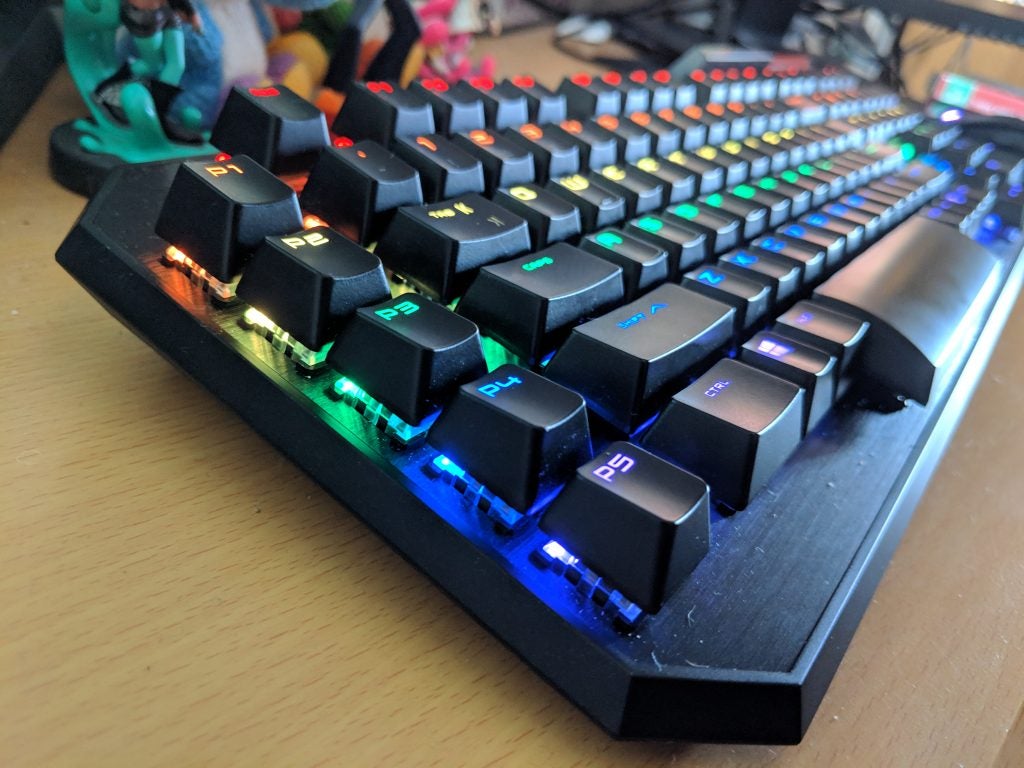 The RGB lighting on display here is excellent, offering plenty of room for different presets

That being said, the HP Omen Sequencer certainly stands alongside other factors to provide the premium feel you’d expect from a £149.99 keyboard. The anodized plate gives way to a slew of optical keys that look gorgeous when enhanced with my personal choice of RGB lighting schemes, but we’ll touch on that more later.

Elsewhere, the two-pronged USB cable is absurdly thick, ensuring that you’ll do no damage when accidentally rolling over it with your chair. As for what purposes each USB connector serves, one is for the keyboard’s data, while the other manages any passthrough you might require.

You can find a solo USB port on the upper left-hand side of the keyboard, although I never found myself using this. However, knowing you have extra space for your growing number of devices is definitely welcome. In theory, you could charge your phone, plug in headphones or even HP’s own Omen Reactor gaming mouse off of the Omen Sequencer.

The Sequencer has a bright-red volume roller, which I found to be quite polarizing. It’s intuitive, making adjusting the volume on your speakers or headphones incredibly easy. Far more trivial than jamming at a volume button or spending several seconds finding the sweet spot with an on-screen cursor. Sadly, it’s a little unattractive when compared with the individually lit keys. 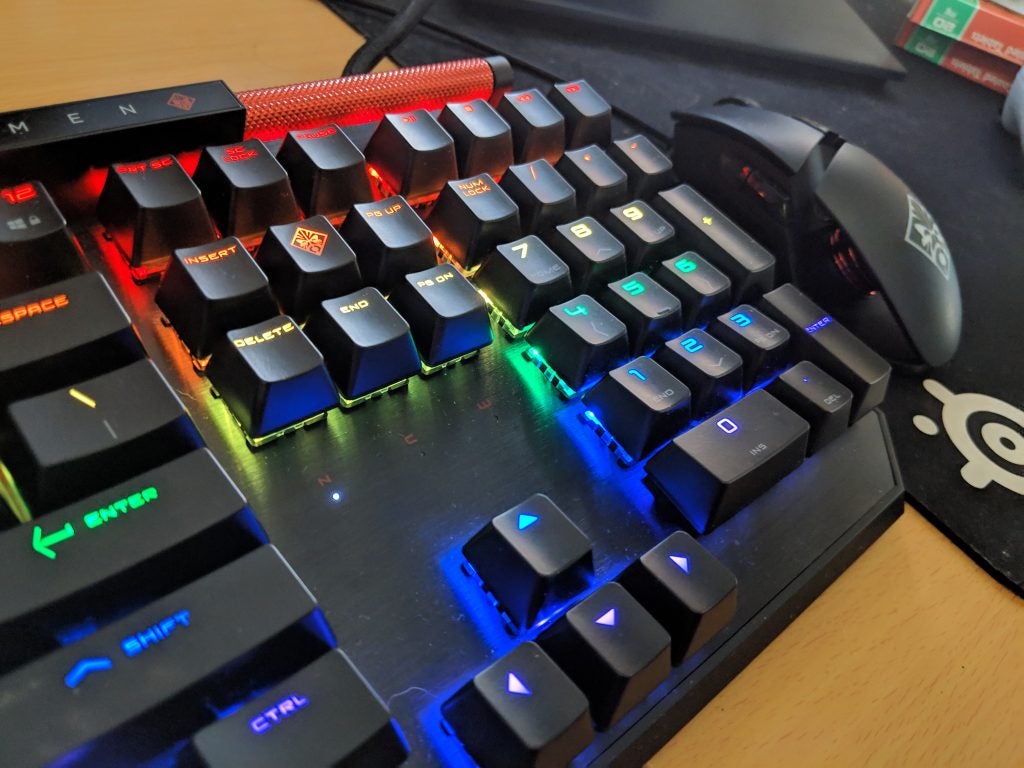 The volume roller feels weirdly placed, but is undeniably convenient in the long run

The keys themselves are excellent, aside from the smaller surface area of crucial commands such as ‘Enter’ and ‘Backspace’ which took me a short while to adjust to. The ‘WASD’ commands are outlined with small grey borders to indicate where all the magic happens.

To test out the HP Omen Sequencer I put it through a bunch of Apex Legends, although I never quite emerged victorious. I think that’s down to me being a bit rubbish, though. In terms of gaming performance, the optical switches allowed for faster, more precise responses as I searched for loot and slid away from enemies into nearby cover.

HP has stated that this keyboard has a 0.2 millisecond response time and zero input lag, and I’ve found it quite difficult to object these specifications. I can’t exactly speak to the 70 million click lifetime, but the Omen Sequencer exhibits a durability you’d expect from a premium device, with each key responding with a brilliantly satisfying click.

There’s an assortment of macro-keys for setting up for your own specific commands, which I found to be useful for summoning my mount and accessing the army of menus in Final Fantasy 14: A Realm Reborn. Aside from the aesthetic subjectivity, I really don’t have a lot to complain about here. 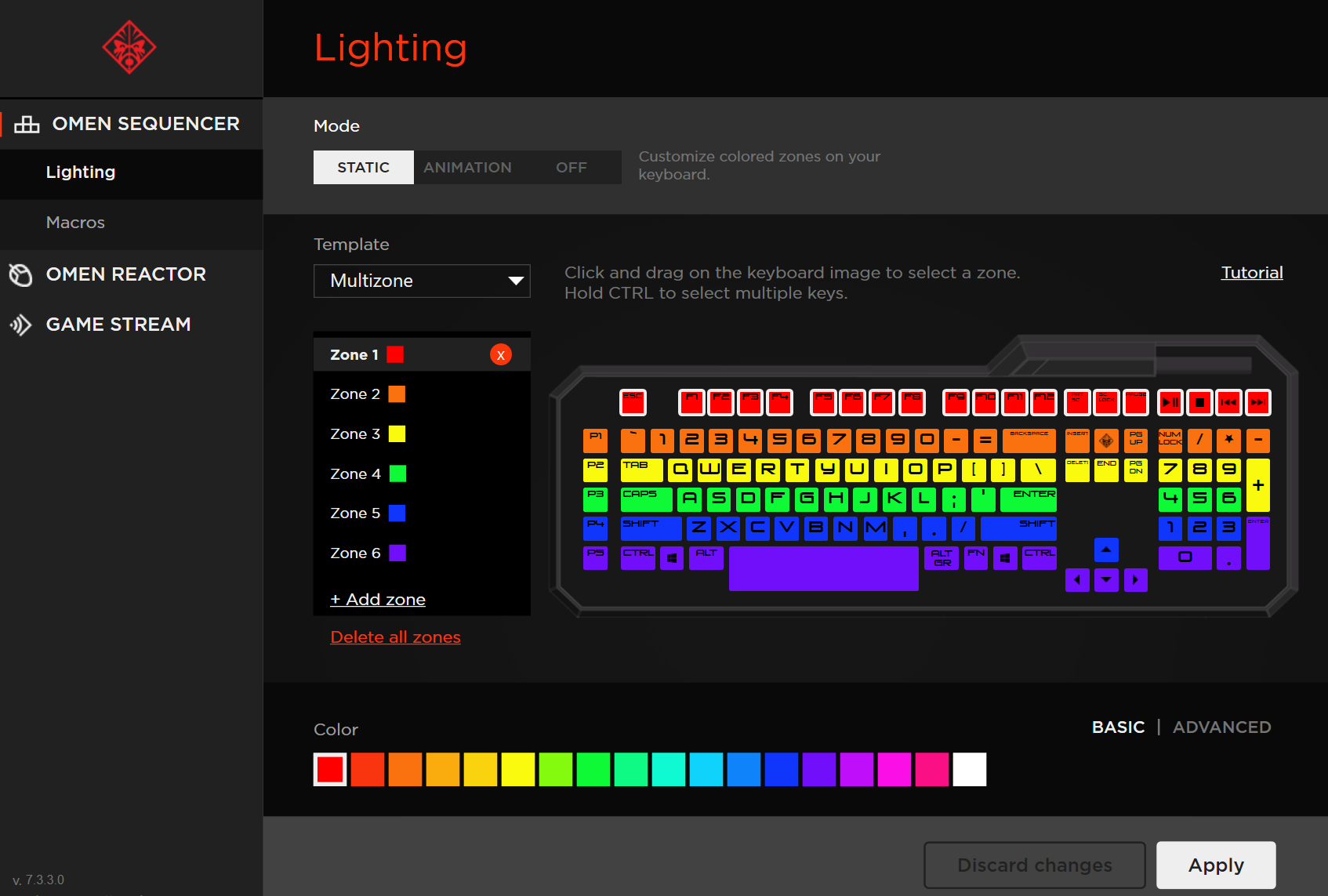 Powered by the Omen Command Centre, The Sequencer spoils you for choice when it comes to customisable RGB lighting. Each key can be allocated an individual zone emblazoned with its own unique colour. HP’s dedication to its fabulous array of lights is commendable, and I had a blast making my keyboard look like a fluorescent pride flag before diving into Apex Legends.

There’s even a button on the keyboard that takes you straight into the Command Centre once it’s installed, making the act of changing your desired setup a breeze. HP has a few presets to choose from, but you’ll likely want to create your own to reflect your own tastes. Being unable to adjust the brightness is an unusual omission, meaning things are often too light or too dark in specific environments.

Should you buy the HP Omen Sequencer

If you happen to have £150 sitting around and are in the market for a gaming keyboard, this one happens to tick all of the right boxes. It works well within the infrastructure HP has created with its line of Omen products thanks to immersive customisation offerings and all-round impressive suite of features to play around with.

The price sits in a similar ballpark to the competition while presenting exactly what you’d want from a high-end gaming keyboard. Granted, it has some aesthetic gripes and a few glaring omissions, but the HP Omen Sequencer remains a stellar bit of kit.

A solid gaming keyboard that ticks all the right boxes.