The HP’s gaming grunt comes from a GTX 1070. It’s the second-best laptop GPU from Nvidia’s latest range, which means it has a huge amount of power: its 2048 stream processors deploy the muscular and efficient Pascal architecture, which is now used inside all of the best gaming laptops.

The GTX 1070 is a potent bit of silicon. Its Tomb Raider frame rate of 93.4fps is comfortably ahead of the Gigabyte P57X V7-CF1, which scored 77.4fps with its standard clocks selected; and the HP averaged a stonking 121fps in Middle-earth: Shadow of Mordor – ten frames beyond the Gigabyte. 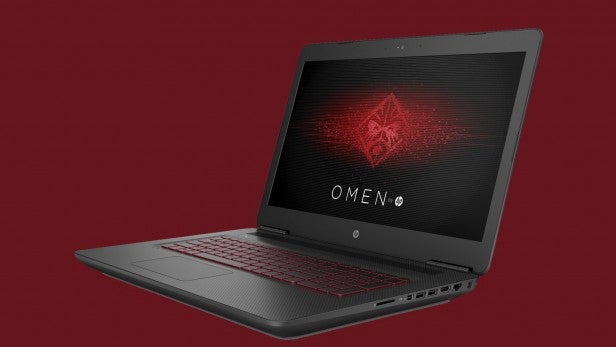 Those are solid speeds, so it’s no surprise that the HP’s 3DMark scores are better than the Gigabyte, too – in the 3DMark: Fire Strike test, the HP scored 13,064; the Gigabyte could manage only 12,890.

As ever, though, there’s more to these machines than simple benchmark scores. The HP may have outpaced the Gigabyte in standard tests, but the P57X has overclocking that the Omen doesn’t – and turning up the Gigabyte’s GPU saw it leapfrog the HP with a revised 3DMark: Fire Strike score of 13,759.

The GTX 1070 is a popular choice, but the rest of the specification is a mixed bag. For starters, the HP is underpinned by a Core i7-6700HQ. It’s a fine quad-core chip with a 2.6GHz stock speed and a 3.5GHz Turbo peak, but it’s a little slower than Kaby Lake, and also misses out on Intel’s improved clock speed manipulation and better chipsets.

Thankfully, HP’s 17-w200na updates the Omen with the familiar Core i7-7700HQ processor. That part doesn’t just benefit from Kaby Lake’s improvements – it’s faster, too, thanks to its 2.8GHz base clock and 3.8GHz Turbo peak. 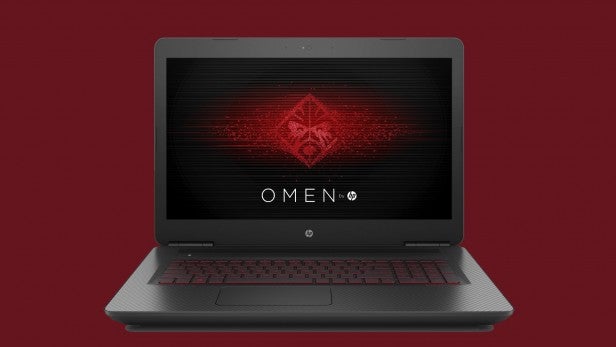 The older Core i7 processor delivered no surprises in benchmarks. Its Geekbench single- and multi-core scores of 4086 and 11,512 are fine, but they’re a little behind the P57X – not a shock considering the older processor. It’s still enough pace to handle almost anything, although the SSD’s middling read and write speeds of 1131MB/sec and 1068MB/sec are slower than the drive inside the Gigabyte laptop.

HP’s machine returned mixed results in thermal tests. When I ran a gaming benchmark over a prolonged period of time, the CPU and GPU peaked at 84oC and 71oC respectively, and the machine didn’t pump out much heat or noise – the keyboard was a little warmer than usual, but that was it.

When I added a CPU stress-test, however, the processor ramped up to a toasty 97oC, which is a little too hot for my taste. The noise became about twice as loud during this test, and warm air was pumped from vents on both sides. It was never dangerous, but it will be uncomfortable if you play with an external mouse.

It’s a conventional specification, but rivals offer far more for a little extra cash. The Gigabyte P57X V7-CF1 has a 1080p variant for £1799/$2343, and that machine comes with 32GB of memory, a faster SSD, a DVD writer and GPU overclocking. But that’s a fair stretch beyond the £1520 you’ll spend on the Omen 17, which arguably has all the basic specs that most gamers would want.

There’s one area where the HP bucked the gaming laptop trend: battery life. This machine’s six-cell power pack lasted for 6hrs 42mins in the standard benchmark, which is around twice as long as most gaming laptops can manage; the Gigabyte didn’t even make it to three hours.

That result translated to a lifespan of 2hrs 10mins in a tougher gaming benchmark, which remains about twice as good as most other gaming notebooks. The HP still won’t handle a genuinely long gaming session, then, but at least it’s better than most.

The HP Omen 17 delivers superb gaming speed, a solid 1080p screen and excellent audio quality – all important considerations when it comes to building a gaming laptop. Its battery life is better than most gaming systems, too. 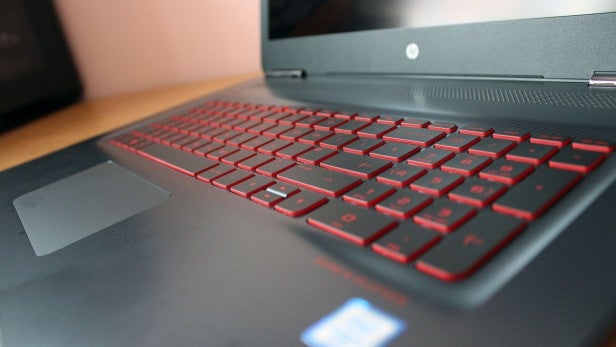 These high points are slightly undermined by several issues, both big and small. The keyboard and touchpad aren’t brilliant, and the absence of tweaking options and software is in stark contrast to most other gaming portables. The memory and SSD are mediocre, and it’s a bit fatter than the competition.

The Gigabyte P57X will be a better option for many: it has ample speed and a decent screen, and its slightly higher price is justified by better components, more software, a svelter design and superior ergonomics.

HP’s Omen brand is supposed to represent the last word in luxury and high-end gaming performance, but I’m a little underwhelmed by this machine. It’s fast, sure, but it doesn’t have the extra touches that I expect from a pricey gaming laptop. With all of that said, if you’re looking for the cheapest GTX 1070 laptop on the market and are happy to put up with the compromises outlined above, this is a fine gaming laptop.

A solid gaming laptop for Full HD gaming and beyond.