The HP Omen 17 is a powerhouse gaming laptop, whose chunky exterior is home some top-tier components. The size of this machine makes it a bit of a throwback – and its price puts it at the centre of a busy market.

However, given that it’s powered by the excellent Nvidia GeForce GTX 1070 and comes in at between £1500 and £1600, it undercuts its key competition by a fair amount. There are compromises, particularly in design and build quality, but if you’re after power and a decent screen, it’s well worth a look.

The Omen 17 is a brooding machine that mixes a dark “shadow mesh” pattern with red accents. The metallic HP Omen logo stands out on the lid, and the keys surrounds are in the same tone. There’s a smart, patterned speaker grille, and the only HP logo on this machine is tiny and unobtrusive.

The laptop looks good, but it’s a bit of a lump. The HP weighs 3.35kg and is 34mm thick, which puts it at the top end of 17.3-inch gaming laptops – the Gigabyte P57X V7-CF1 weighed 3kg and was 29mm from top to bottom. The HP’s heavyweight design will make itself noticed in your bag, taking up more room than most other laptops. 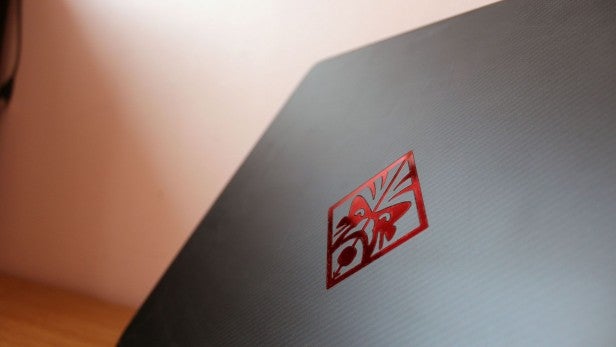 Despite its generous form factor, the HP isn’t rock-solid. Pressing on the rear of the screen results in distortions, and the underside of the laptop is too flexible for my liking. The wrist-rest and the area around the keyboard are far sturdier, at least.

Interior access isn’t too great, either. A tiny panel on the underside of the device pops off to reveal the two occupied memory slots, but that’s it. This is in stark contrast to the Gigabyte, which provides easy access to every component alongside a swappable bay for an extra hard disk or DVD writer.

The red-tinted keyboard is a disappointment. There is a separate number pad, but the rest of its layout is a let-down: the Return key isn’t double-height, and the ‘up’ and ‘down’ cursor keys are crammed into the space of a single button. There aren’t any macro keys, and there isn’t any software to customise the keyboard. 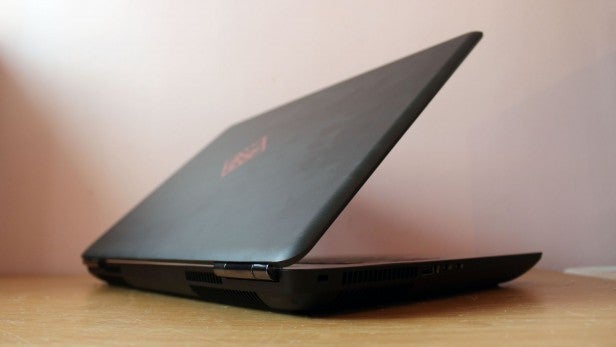 It performs poorly when typing, too. The keys are consistent and reasonably fast, but they display even less travel than the chiclet-style buttons on most other gaming laptops – in fact, the HP’s typing action is more reminiscent of a Dell XPS or a MacBook Pro than the majority of gaming portables. This is fine for hammering out documents, but it means the HP feels indistinct during intense gaming sessions – this isn’t good when a mis-type can mean game over. 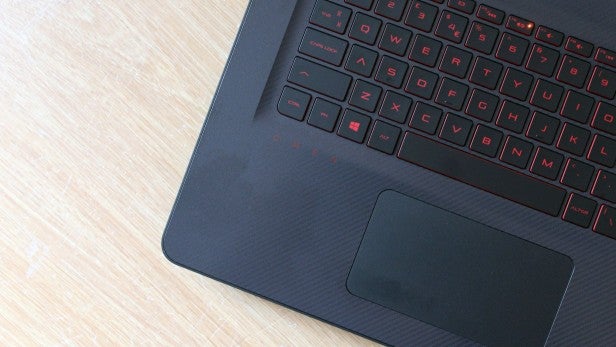 The touchpad is found wanting. The buttons are soft and push down too far, which means they’re a long way removed from the best actions found elsewhere. The pad itself suffers a little too much friction, and the entire unit is far too loud – people will hear you clicking from across the room.

The 1080p screen combines Nvidia G-Sync with a helpful matte finish, and its IPS technology delivers solid performance in every department.

Its brightness level of 332 nits is huge, and the black level of 0.34 nits makes for relatively deep blacks. The contrast ratio of 976:1 is little lower than some gaming notebooks, but on the whole it’s a decent showing. You’ll still get solid vibrancy, good definition between similar shades and appropriately inky black areas while playing games and watching movies.

The average Delta E level (measuring colour accuracy, where closer to zero is better) of 3.21 is perfectly acceptable, and the colour temperature of 6612K is excellent – almost on a par with the 6500K ideal, and far warmer than the washed-out screens of most gaming laptops. The HP can render 87.7% of the sRGB colour gamut, which is another fine figure.

The HP’s screen is good, rather than great, and that form continues to the backlight. The Omen’s IPS panel lost around 10% of its brightness along its top and bottom edges, which isn’t particularly noticable.

The Omen’s screen is solid for gaming, although the panel is another area where there’s a distinct lack of software – many other gaming notebooks have different modes and adjustment options.

HP has included four Bang & Olufsen speakers with this machine, and this is one of the only areas of this laptop that can be manipulated by software. The Omen uses its Music mode by default, and it’s superb: high-end sounds are clear and the mid-range is well balanced, with no sign of the muddy output that’s found on many gaming notebooks. There’s bass, too, although it’s a tad weak.

The Omen’s Music mode doesn’t just work well with Spotify; it has the volume and clarity to make games sound fantastic. There are Movie and Voice modes, too, although both are a little tinny. The Music mode is the best option here, then, and it’s far better than the audio on most other laptops.