The HP Omen has a specification and price that marks it out as a gaming laptop, but it’s a different beast than most of its rivals.

Its body is finished in black, incorporating the kind of smart pattern we’d normally associate with a high-class Ultrabook, and it’s augmented by red LEDs and a cylindrical metal hinge.

The dotted pattern extends across the Omen’s lid and is interrupted only by a smart, raised Hewlett-Packard logo. The underside is finished in a similar texture that looks better than the vents and panels found beneath most gaming laptops. The Omen’s two halves clasp together to form a device with a striking, sharply angled profile.

The metal used to build the Omen is all black, with a hint of colour provided by the red LEDs. The speaker grilles that stretch down each side of the keyboard glow with these LEDs, which pulse in time to music. The two air vents at the rear also have their own set. The power button is illuminated, and the keyboard is backlit. The only item that isn’t red or black is the hinge; it’s chrome, with a blue tinge at either end. 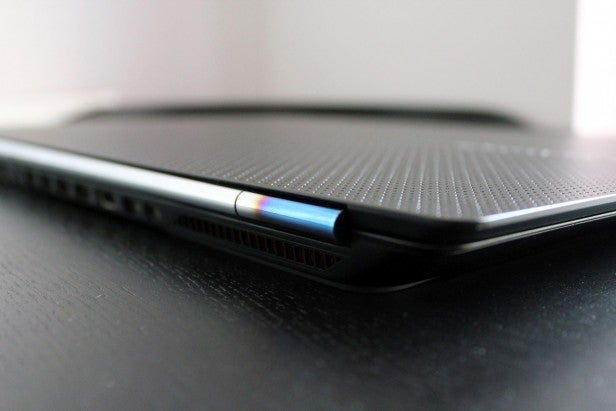 The Omen doesn’t only stand out for its looks. It has a depth of less than 20mm and it weighs 2.1kg, which means it undercuts the 2.4kg MSI GE62 2QD Apache by 7mm. It’s even slimmer than the Alienware 15, which is almost a kilo heavier and more than a centimetre thicker.

Despite the slim design, it’s sturdy – the wrist-rest, screen and underside barely move when put under pressure. The Omen would still benefit from a protective sleeve, but only to ensure its looks aren’t damaged.

It’s all good so far, but the Omen has a few issues. Four USB slots sit round the back of the machine, making access awkward. The same is true of the HDMI port, mini-DisplayPort socket and the single headphone jack. Only the SD card slot is installed elsewhere, and there’s no room for an optical drive either.

Access to the inside is challenging too. The screws to remove the base panel are hidden beneath rubber strips, which can’t be re-attached once they’ve been removed. 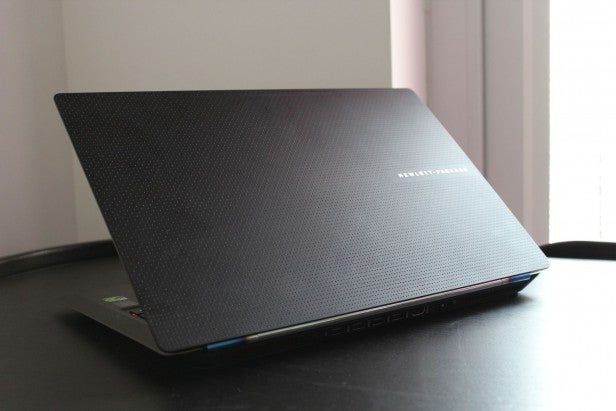 On paper, the Nvidia GeForce GTX 860M graphics core appears to be a last-generation part. However, it’s built from the Maxwell architecture featured inside Nvidia’s latest cards.

The GTX 860M’s GM107 core is also found inside the MSI’s GTX 960M, and there’s little difference between the two. Both have 640 stream processors and four gigabytes of memory, and the GTX 860M’s top clock speed of 1,085MHz is only 11MHz behind the GTX 960M’s minimum clock.

There’s 16GB of memory, which is twice the amount of both rival machines. But there’s no hard disk. Instead, Windows is installed on a 512GB Samsung XP941 SSD, which should deliver better speed than rivals.

Connectivity is surprisingly disappointing. Dual-band 802.11n wireless is included, but there’s no support for the 802.11ac standard or Gigabit Ethernet – unless you use the USB adapter provided.

The keyboard’s six macro keys can be programmed with five different assignments using the HP Omen app. This tool doesn’t only handle macros, however; it can alter the keyboard’s backlight in five different zones and deactivate the speakers pulsing LEDs. It can also turn off the touchscreen and touchpad so they don’t interfere with games, and it can switch off the Windows, Caps Lock and Menu buttons too.

HP’s Omen Control isn’t the only software the company has installed. The Beats Audio app has a graphic equaliser, voice and movie modes, plus a couple of volume toggles. Bloatware is, mercifully, kept to a minimum. There’s a Weather Channel app and an HP cloud service – and that’s it.

The one-year warranty is standard for this level of machine. HP makes only one alternative specification available: the Omen 15-5001na is £100 cheaper than the machine here, and it saves cash by halving the amount of storage and memory.