The 1,920 x 1,080 screen is touch-compatible and has a glossy finish – attributes usually found on consumer laptops rather than gaming machines.

It has the pixels required for games, then, but its quality can’t quite match the competition. Its contrast ratio of 867:1 is a tad behind both rivals, and its 0.39-nit black level is also a little poorer than the competition. The HP’s 338-nit brightness level falls between the Alienware and the MSI, but all three machines have a strong backlight.

Colour accuracy isn’t quite up to scratch, either. The average Delta E of 1.94 is good, but the two rivals are better. Also note that the Omen’s cool colour temperature of 8,326K is wayward, with the MSI and Alienware systems both warmer. Its sRGB coverage level of 91.3% is good, but the Alienware is better. 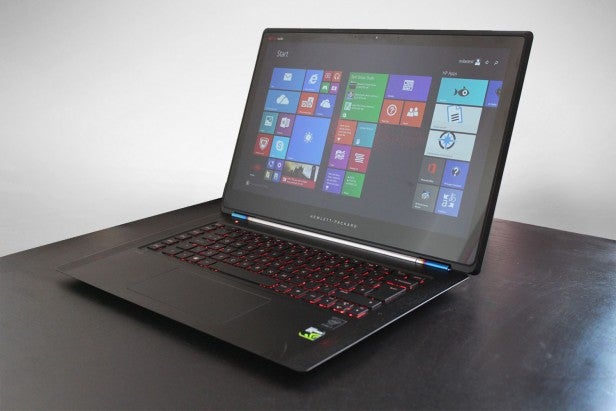 Viewing angles are excellent throughout, and the screen is consistent too; it never lost more than 9% of its brightness, and its colour temperature remained even closer to our measured figure.

The Omen has an impressive screen, with decent contrast, a deep black point and good colour accuracy, and all of those attributes mean it’s more than good enough for games and movies. Its main issue is its rivals: both the MSI and Alienware machines are better still.

It’s a shame that the screen can’t quite compete, because the audio kit is excellent. The Beats-powered speakers have huge volume and a great balance between a crunchy mid-range and the snappy, nuanced high-end. The bass was initially weak, but the Beats Audio app means this can be quickly rectified.

The Scrabble-tile keyboard impresses with its column of macro keys, but the rest of the layout is a mixed bag. There’s no number pad, and the cursor keys are tiny and have to share shortcuts with other functions. The full-sized Return key is welcome, as are the larger Shift and Control buttons. 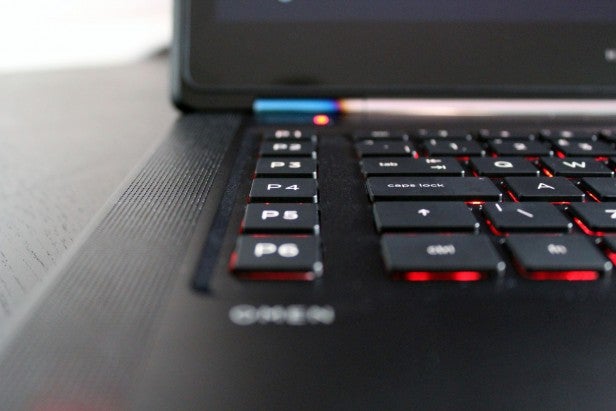 The keys are fast and consistent to respond, and the base feels sturdy enough to withstand the abuse dished our during intense gaming sessions – which means that it’s top-notch for typing on, too. The most prominent issue with the keyboard is poor travel: the MSI’s has a little more, and the Alienware’s traditional keyboard is much closer to the mechanical units that gamers prefer – and is therefore better for gameplay.

The trackpad isn’t without issues, either. It’s wider than most laptop pads, but the extra width doesn’t do much to better the overall experience. No extra features are included to take advantage of the space. It has two built-in buttons that, while light, can’t match the discrete buttons on the MSI and Alienware when it comes to rapid clicking, which is important for gaming.