It’s been a long six-plus years since Hitman: Blood Money; years in which the gaming world has changed, franchises have risen and fallen, and things like stealth and emergent gameplay have fallen in and out of fashion – and recently back in again. These have also been years in which the house of Hitman, IO Interactive, has made some of the riskiest action games out there. Kane & Lynch and its sequel might not have met with much critical or commercial success, but you had to admire their bravado. Heavy on style, dark and experimental, these were action-thrillers that looked to crime movies, indie cinema and documentaries for inspiration, rather than the usual tired sub-Tom Clancy nonsense. Of course, this didn’t necessarily mitigate short running times, poor AI, bad graphics or a dodgy cover system, but you couldn’t say that IO wasn’t trying to deliver something new. 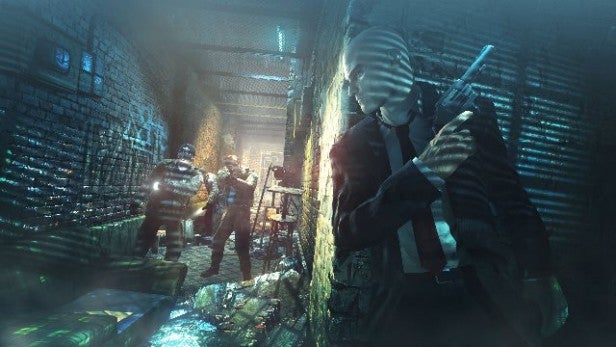 Hitman: Absolution sees the developer back on more familiar ground. We’re back in the shoes of bald, barcode-sporting killer, Agent 47, finding innovative new ways to eliminate our targets. There’s a whole lot of sneaking around, putting on disguises, garrotting, setting up accidents and hiding bodies in dumpsters. There’s still a high degree of freedom in how you go about objectives, and you’re still rewarded for taking a methodical, carnage-free approach. At the end of each level you’re rated for your efforts, and the game has its own optional challenge objectives to encourage you to try different and more inventive styles of play. It’s just about possible to play Hitman: Absolution as a third-person shooter, but you won’t get much of a score and it’s really, really hard work. 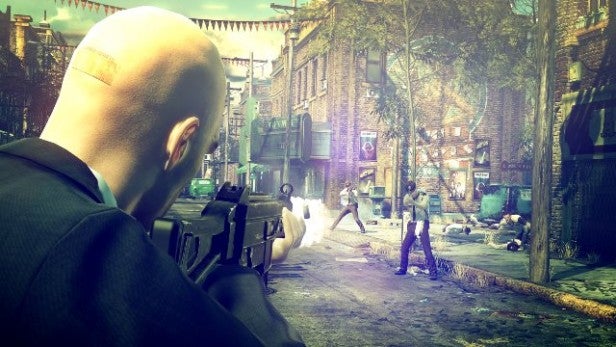 So far, so Hitman, but Hitman: Absolution still shows telltale signs of coming from the same team that brought us Kane & Lynch. Like Kane & Lynch: Dead Men and Dog Days, it’s a game in thrall to cinematic ambitions – sometimes to its cost – and one obsessed with characters at the extremes. And while this is IO’s tightest and most accomplished game since Blood Money, it’s still compromised by stupid, unnecessary flaws that make an often brilliant game feel a bit less brilliant.

At its best it’s a fantastic return/reboot for the series, full of opportunities to help unpleasant people meet even more unpleasant ends, and rich in a bloodthirsty black comedy. Even something as simple as infiltrating a seedy, mobster-packed hotel can host a multitude of approaches. Do you sneak in from the side, garrotting guards as you go and impersonating an electrician, or do you cause a distraction out front, sneak through while everyone’s not looking, and try to march calmly towards the elevator? 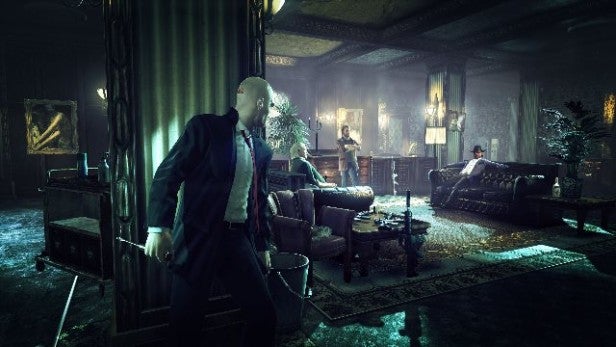 Divide and conquer tactics work well on groups of guards, but it’s impossible – even inadvisable – to kill every one, and where’s the fun in doing things the hard way? Why not poison the food or the coffee, rig up an accident with a faulty electric supply and flooded basement, or set up an explosion with a tragically situated gas canister. There’s always some more inventive way to do things. The more you get into the Hitman vibe of watching, stalking, sneaking and slaying, the more fun the game becomes – like a peculiarly violent strain of hide and seek, where you can never be quite sure who should be hiding, or who will be the worse off when they’re found.

Mechanically, Hitman: Absolution is much sounder than either of the Kane & Lynch games, with smart, context-sensitive controls, effective systems for sneaking, finding cover, swapping weapons and making sneak attacks. A refillable Instinct meter can be used to blend in, spot guards and target positions and predict movements, or even take out several marked enemies in a single burst, but its use is carefully time limited, ensuring you can’t rely on superhuman capabilities.

Enemy AI in Hitman: Absolution is smart enough to be interesting, but not so smart that it’s unpredictable. While in disguise, characters in the same uniform might rumble you, but others will only take an interest if you’re somewhere you shouldn’t be, and if you’re discovered enemies will search hard for you, but not with any ludicrous level of perception. There are clever crowd dynamics so that you can lose yourself in the throng, and at times causing chaos and manufacturing distractions can be as effective as a surgical approach – though you might not be scored quite so highly. Even combat is well-handled, with solid cover, aiming and targeting controls – with a precision aim if you gently squeeze the trigger – and a close combat system that, despite a passing resemblance to a quick-time-event, works very well. 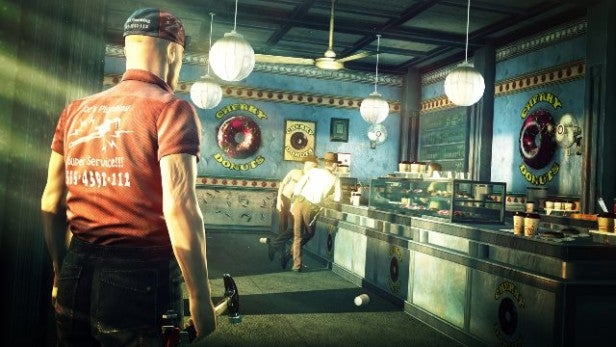 IO caught a lot of flak for the visuals in Kane & Lynch, which were patchy in the first game and deliberately ugly in the second (the team was looking for a digital video/YouTube feel). Hitman: Absolution is no Uncharted 3 or Halo 4, but its characters look believable and its environments are richly detailed, to the extent that you can almost smell the decrepit hotels, seedy strip joints and backwater barrooms. The often ingenious use of lighting also shows that IO hasn’t entirely forgotten the out-there style of its last two action games. Though we can understand the disappointment that composer Jesper Kyd has not returned, the new soundtrack is also very good; quiet and atmospheric when it needs to be, but urgent and striking when all hell breaks loose. 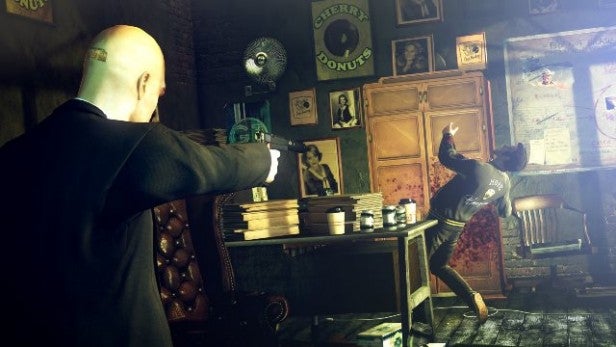 Hitman: Absolution’s story isn’t necessarily that new, that exciting or that skilfully told – it’s a variation on the classic ‘agent goes AWOL and turns against the agency’ routine – but you probably haven’t seen it told quite like this, with some truly bizarre adversaries and some of the weirdest scripted encounters we’ve seen since, well, the last Kane & Lynch. It’s sometimes hard to root for Agent 47, but it’s easy to root against the game’s cast of mad Arms dealers, creepy Agency honchos, cackling killers and degenerate gang leaders. Dialogue throughout the game is fantastic and genuinely funny – not the least the incidental dialogue, whether banter between guards stuck on tedious patrols, or the haranguing thrown at the hapless hotel owner by his harridan wife.

We’re not quite so keen on the vein of misogyny running through the game. It would be easier to take the killer nuns in fetish gear if every second female character wasn’t shown naked, wearing something skimpy or fiddling with a highly visible bra. Sadly, here’s another high-profile game that equates adult themes with “check out these boobies.”

It’s not just this that holds Hitman: Absolution back. Firstly, the push for a less mission-structured, more narrative-lead Hitman means that as well as all the exploratory, target-killing stuff we like, we also get several long escape sequences where your only job is to get from one part of the map to the next, getting past whatever cops, thugs or obstacles stand in your way. These are repetitive, dull and not all that much fun. We’d also argue that objectives like ‘find three fuses for the generator’ have no place in a Hitman game. 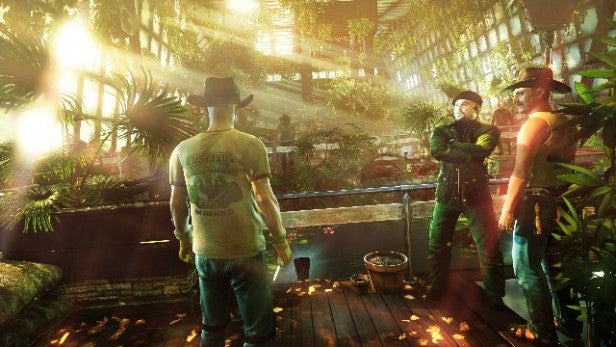 Levels that would once have been one continuous maps have also been sawn into discrete sections, which means some ridiculous moments where guards or cops following you will stop just because you’ve gone through a door or entered an elevator. Most seriously, a game where all the systems encourage risk and experimentation has a manual checkpoint system that actively discourages it. You can only save progress at specific locations, and then only once.

On some maps, these locations seem deliberately hidden or obscure. And while there are some other checkpoints when you enter a new map or when a specific narrative event occurs, you’ll still often find yourself replaying the same section over and over, hearing the same dialogue over and over, until you get it right. It’s always disappointing when you spend ages setting up an elaborate demise just to have it go pear-shaped at the last minute, but when the checkpoint loses you the last fifteen minutes of play, the temptation is not to bother next time and go for a less risky approach. 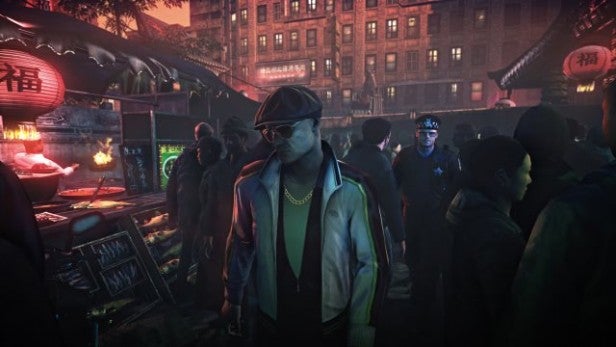 This can leave you angry and frustrated, but rarely so angry and frustrated that you don’t want to go back for another go. Whatever Hitman: Absolution gets wrong, it gets so much right, its best levels give you the tools to pretend you’re the perfect assassin even if you seem hell-bent on playing the perfect klutz. With a bit more care the next Hitman could be a classic, but few would begrudge Agent 47 this return to his deadly work.

Hitman: Absolution has its issues with checkpoints, truncated maps and story-led design, but these mar rather than spoil what’s otherwise an impressive return. This can be a frustrating game, but when things go right it’s a very rewarding one, giving you scope to carve your own way through one of the most gripping thrillers of the year.