Ever since Bungie quit the Halo universe and passed the reins over to 343 Studios and Microsoft, the same question has hung over Halo 4: it might look like Halo, it might feel like Halo, but would it have Halo’s soul? 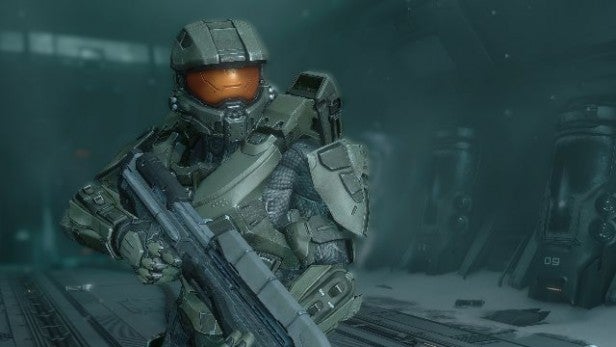 Within a few hours of the single-player game, the question pretty much evaporates. In a lot of ways, Halo 4 feels more like Halo than any Halo since the original. Remember the sense of wonder you felt at the scale of the game and its landscapes? The visual spectacle of the Covenant spacecraft, their armour and their architecture? Remember the thrill of playing a game where your enemies were truly unpredictable, and where encounters never quite played out the same way twice?

Well, Halo 4 does it all, then ramps everything up to a whole new level. While you can’t exactly call it ground-breaking or innovative, it’s a beautifully made sci-fi saga that proves the current console generation still has the power to wow. It’s clear that a whole tonne of money has been thrown at it, but every last cent is up there on the screen. 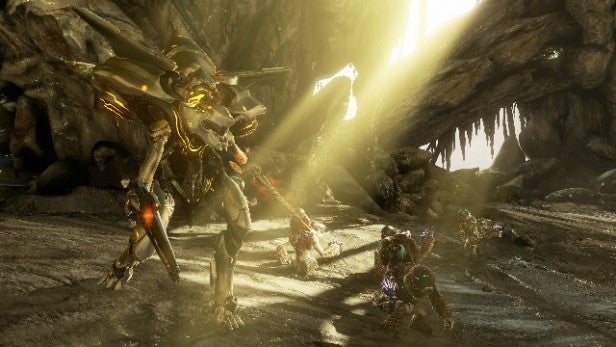 Halo 4 kicks off where Halo 3 ended, with the Master Chief in cryotonic slumber on the broken starship, Forward Unto Dawn, watched over by his AI muse, Cortana, and drifting towards an unknown planet. Needless to say, it doesn’t end there, and it’s not long before our hero finds himself on and beneath the surface of Requiem, battling both against Covenant forces and a new foe, with roots in the ancient Forerunner race that created the original Halo, and with access to their advanced technology. Not only has Master Chief got his hands full, but there’s trouble for Cortana too. She’s nearing the end of her seven year AI lifespan, and at risk of going bonkers if she can’t be treated pretty soon. A nearby UNSC warship offers some vague hope of rescue, but can it be reached, can the Master Chief and Cortana escape, and at what cost? 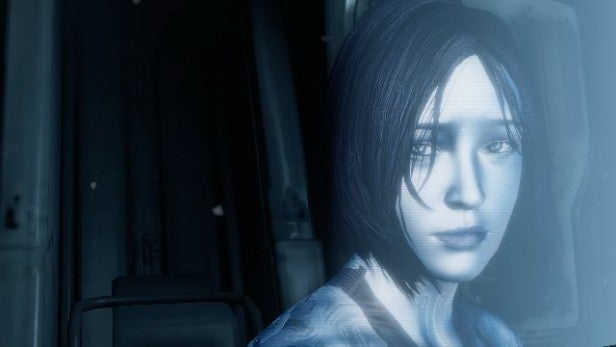 If we’re vague about any further details, it’s intentional. It’s not that Halo 4 is a work of unalloyed literary or cinematic genius, but the writing, the plotting, the voice work and the cut-scenes are a step beyond the vast majority of sci-fi action games, and you really deserve to experience it all for yourself without any spoilers.

What we can talk about is how the game plays. The answer is – like Halo, but with a few interesting tweaks. Firstly, the armour abilities of Halo: Reach have now made the move to the mainstream Halo storyline, with Master Chief gaining access to stealth, shields, visual and other upgrades at various points in the game. Secondly, you have a whole new range of enemies to contend with, with the Forerunner Prometheans appearing in a selection of forms, from fast-moving, jumping dog-like critters to aggressive knights with short-range teleport abilities. 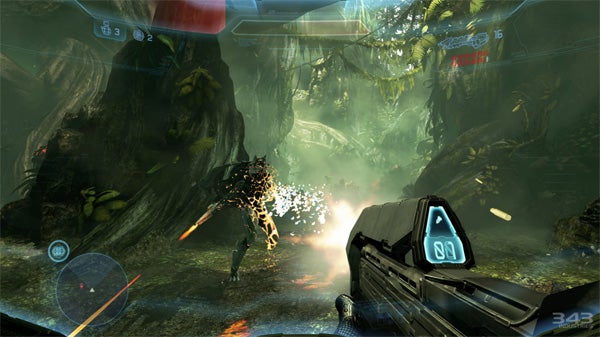 Luckily, these bring with them a new gamut of weapons, and while most of these are variations on the usual assault rifle/magnum/shotgun/carbine classics, there are differences in the way they impact on specific Promethean or even Covenant troop types. Part of the challenge in Halo has always been finding the right balance of weapons to deal with the enemies you might encounter, and Halo 4 makes that challenge feel even more demanding. Throughout ammunition will be scarce, so sometimes you won’t even have a choice, but with both the Covenant and Prometheans to deal with, it’s very hard to cover every situation.

While we were concerned about changes to Covenant personality in our preview, we’ve had no real worries during the single-player game. The grunts might not have so many lines, but they’re as mischievous and snarky as ever – nothing hurts more than a giggling grunt when you’ve just bitten the dust. The Promethens, meanwhile, bring a whole new aura of mystery and menace to the proceedings. 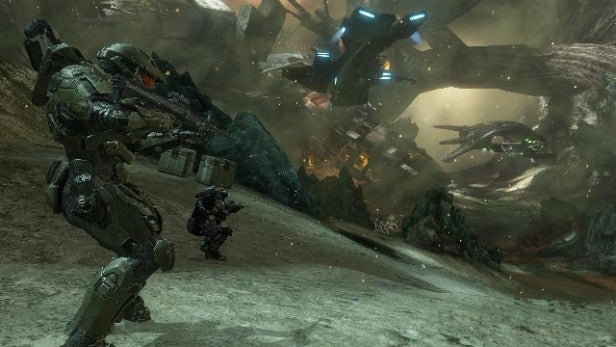 Perhaps more worrying were the concerns that Halo 4 might see a move to more linear, Call of Duty-like levels, but in fact these fears are all but unfounded. Some sections are quite restrictive, but Halo 4 remains full of those large-scale battlefields where you can tackle your enemies on foot or in a vehicle, where you can experiment with different strategies, and where you can try different routes with different weapons. The AI is as smart and responsive as ever – though Covenant pilots occasionally struggle in the space available – and the action has a great rhythm of tension and release.

This isn’t a heavily scripted, CoD-style shooter, but one where the gameplay emerges from the complex interactions between your actions, those of your AI and enemies and the weapons or vehicles you employ. It just flows. The big set-pieces are as huge and brilliant as you could hope for, but those sections of gameplay that string them together are just as entertaining. Forget any worries you might have had that 343 Industries wasn’t up to the job. Halo 4 is consistently exciting. 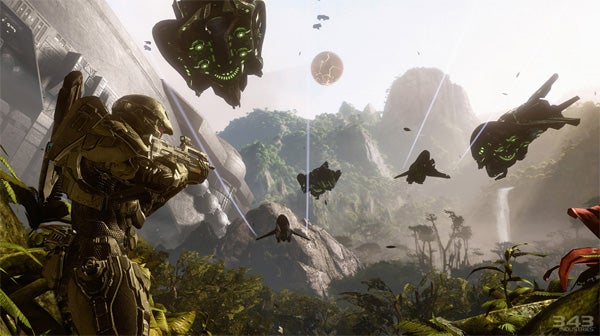 We can also talk about how the game looks. The short verdict is: incredible. It has Halo’s typically impressive design and production values, but with more detail, better lighting and more superb atmospheric effects than ever before. It has the stunning widescreen scenery of Halo: Reach but also the dazzling alien architecture of Halo 2 and 3, plus a whole new flavour from the Forerunner team. And not since Metroid Prime have we played a game that creates such immersive and believable alien worlds, with weird jungles, strange buildings and eerie, smoke-filled canyons. When the big set-pieces happen or the world is collapsing around your ears, the sheer spectacle is simply breath-taking. Being picky we might complain that the vegetation is a little lifeless, but this does for the Xbox 360 what Uncharted 3 did for the PS3: it shows a console at the top of its game.

And while we’re at it, we should also mention the sound. Neil Davidge’s score is phenomenally good, sounding all the right notes of bomb blast, awe and creepy quiet as required. The effects work – as much a part of the universe as the look – is top notch, and it all combines with the visuals brilliantly. This is how a blockbuster game should look and sound. 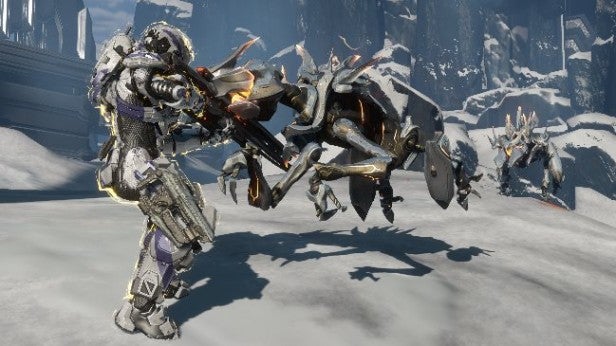 In short, the single-player campaign is astonishingly good. To be honest, we came cynical and ready to be underwhelmed, but have instead been knocked out and taken along for one heck of a ride. If you hate Halo then you’ll still hate Halo 4, but otherwise it’s hard to imagine anyone coming away thinking that this is anything less than an exceptional action game.

Multiplayer has always been a huge part of the Halo experience, and 343 Industries hasn’t messed too much with the successful formula. The competitive portion, War Games, delivers a solid mix of mostly team-based modes, and while none show a huge amount of imagination, a combination of great weapons, excellent maps and careful balancing ensures that Halo 4 is a worthy successor to Halo 3 and Halo: Reach. Persistent characters, experience and weapon unlocks do a little to change the nature of the game – and it’s a challenge as a newbie to scavenge new weapons from the battlefield – but they don’t spoil it. This is still Halo; fast, frantic and more focused on mayhem than on battlefield tactics or realism. Whether you’re playing on a tight, deathmatch-ready map or a more expansive map with Warthogs, Wraiths and Phantoms, It’s every bit as addictive as it has ever been. 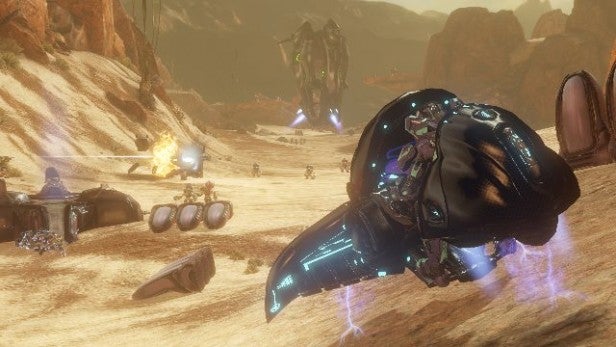 You could accuse War Games of playing it slightly safe, but the co-op Spartan Ops mode gives us a whole new way to play Halo. A series of 10 episodic side-missions, complete with cut-scenes and an over-arching storyline, it’s designed to expand the Halo 4 narrative over the coming months. The first episode, with five chapters, lacks the verve and epic feel of the main campaign, but there’s potential for that to build in the remaining episodes and some interesting foundations are laid in place. We just wish it hadn’t come at the expense of Reach’s enjoyable, Horde-style Firefight mode.

By any yardstick, this is a fantastic return for the Master Chief, and proof that the spirit of Halo didn’t die when Bungie left the building. Halo 4 is a visually dazzling, consistently thrilling sci-fi shooter, and while it doesn’t do anything at all revolutionary, it adds enough new ideas and material to lay down sturdy foundations for the series’ future. Most of all, it raises an enticing proposition: if 343 can do something this good on current hardware, what an Earth can it do with a next-generation Xbox?