There’s
a problem with reviewing games. No matter how hard we try to pretend
that there’s some kind of technical or critical practice involved, as
we pore over and evaluate the graphics, the game mechanics, the
production design and the gameplay, it really all comes down to one
thing: the experience. How does this game make you feel? With some
games, that’s a tricky one. Why do you feel one way or another? Will
other people necessarily feel the same way. With Uncharted 3 it’s
easy. Playing Uncharted 3 is like watching one of your favourite
blockbuster movies, but having direct control of the action. By
necessity it’s a linear experience, but if so it’s one of the most
thrilling and emotionally engaging games we’ve ever played. 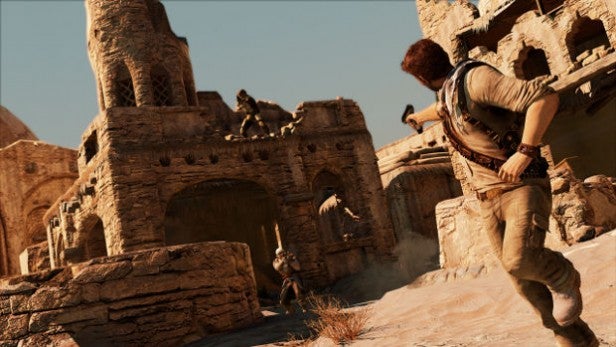 Now,
some of you might not have played Uncharted: Drake’s Fortune and
Uncharted 2: Among Thieves – in which case we’d urge you to
rectify this error immediately, if only because it makes playing
Uncharted 3 even richer and more wondrous than it already is.
Basically, the games chart the life and times of one Nathan Drake –
a treasure-hunting hero in the mould of Lara Croft and a certain Dr.
Jones – as he searches for fortune and glory across South America,
Europe, Asia and the Himalayas. 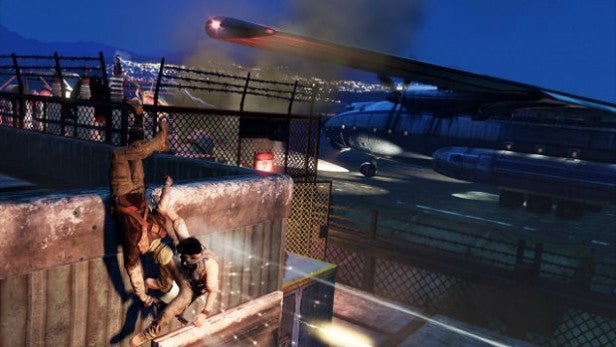 If
you were being critical, you would probably say that the gameplay is
effectively Tomb Raider meets Prince of Persia meets Gears of War,
with a nice mix of platforming, puzzle-solving and cover-based gun
battles, but this doesn’t really do it justice. The trick to
Uncharted is that the mix is so perfect, and that the games are so
cinematic. We don’t just mean this in the usual sense that it’s
packed with movie-like camera angles and motion-captured acting, but
in the sense that the games value the things that used to make
Hollywood movies great: a good story, interesting characters,
engaging dialogue and big narrative hooks. And when the Uncharted
games go for the spectacle, they go really, really big. Uncharted 2
in particular was full of moments where you thought “they’re not
really going to do that, are they? They can’t!” And then they
did. 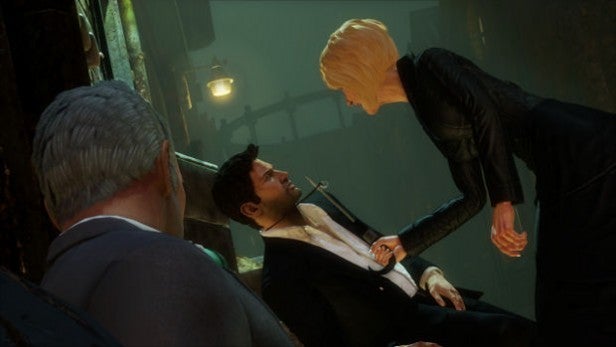 All
this is true of Uncharted 3, which does a brilliant job of taking
Drake, his mentor/father-figure Sully, and the other key Uncharted
characters to new places and new dangers, while exploring a little
deeper into what makes them tick. The action kicks off in London,
before moving to French chateaux, middle-Eastern castles, secret
crypts and pirate shipyards. It starts strong and pretty much never
lets up.


The
team at Naughty Dog has practically perfected its pacing. Where
lesser games give you the same sixty seconds, over and over again
with a few variations, Drake’s Deception moves effortlessly from
high-tension platforming to fraught gun battle to brain-stretching
puzzles to fisticuffs and chase sequences, each element never
standing out as separate, but all part of one gloriously cohesive
whole. Like the Call of Duty-style orchestrated shooter, it’s
effectively a one-track thrill ride, but one that works on a much
broader emotional level than Infinity Ward’s run and gun shooters
ever could.


We
had our doubts about how Naught Dog could top Uncharted 2’s big
high points, but if it hasn’t outdone them it’s certainly matched
them. Once again, set-pieces that would be the climax of another game
become the closing point for a chapter: the big pay-off before it all
starts up again. The gun-battles are great, but the real highlights
of Uncharted 3 are those moments where all hell breaks loose, with
environments that burn, crumble, dive and flood around you, with
Naughty Dog’s excellent animation systems working to make every
interaction with the environment look and feel totally
convincing. 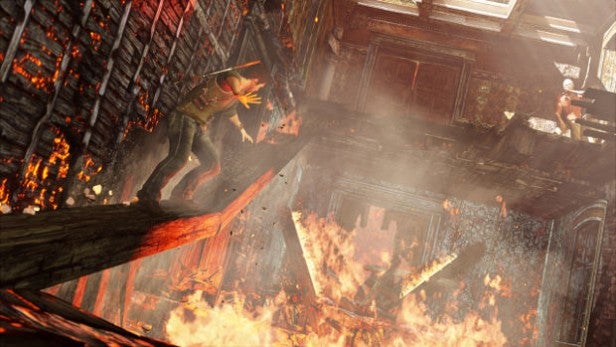 In
some ways, the gameplay remains unchanged from Uncharted 2, but there
are some improvements. Close combat plays a larger part, with a
greater emphasis on counter moves and some excellent (and very
satisfying) context-sensitive animations, making it all the more
enjoyable to grab an enemy, slam them against the nearest hard object
then give them the old one-two until they collapse. Punches, kicks,
throws and headbutts all flow naturally together.

Stealth also works
better than it ever has in an Uncharted game, with some brutally
efficient attacks and more flexible use of cover. We’re not talking
revolutionary enhancements, but they certainly add something to the
overall experience. And if Uncharted 3 is linear, there are pockets
of action where you’re free to express your own play style. Is there
a bunch of goons between you and your next objective? Well, you could
go in all guns blazing, but why not sneak up on them and even out the
numbers? 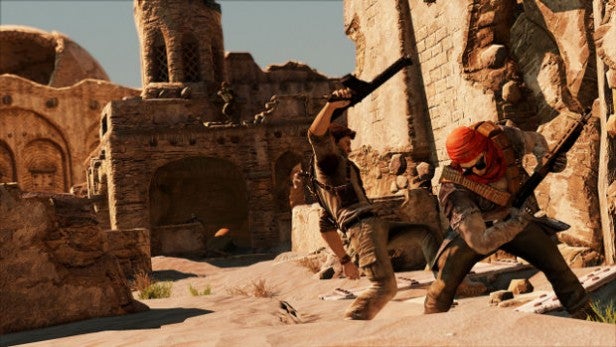 Graphically,
Drake’s Deception looks even better than the already stupendous
Among Thieves. The level of detail and clutter in the scenery is
frequently breathtaking, and the lighting has an amazing photographic
quality, that works as well in secret underground chambers and
moonlit ruins as it does on the sun-bleached streets of the Yemen and
Catagena. The animation is dazzling – just witness the way Drake
pushes and stumbles against the scenery as he runs, or the way
bystanders turn their heads to watch you move. Close-up, Drake’s
deception doesn’t quite go for the photo-realism of Heavy Rain or
LA Noire, yet the characters are, if anything, more believable. The
models, the body movements and the motion-captured animation seem to
blend together into one personality. 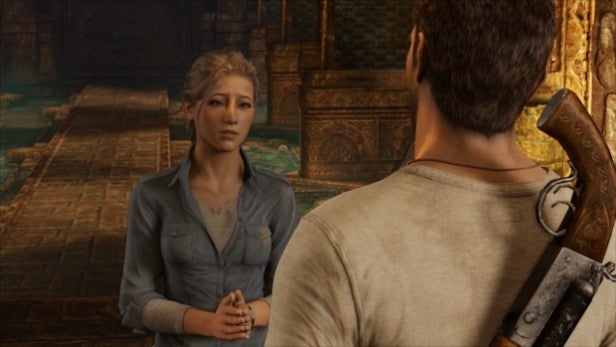 Nor
should we ignore the sound: Drake’s Deception sounds like a
big-budget movie. It’s not that it’s hard to find a game these
days with a sweeping score and good voice acting, but you can tell
that Nolan North and his fellow actors are working in the same room,
and that the cast has had time over all three games to build up some
kind of rapport. There are no phoned-in star performances or ugly
pauses, and the dialogue just flows. Use of sound effects is equally
good, whether it’s the spot effects that add atmosphere deep
underground, or the bangs, shots and blasts of a massive fight
scene.

At
this stage, it’s hard to talk much about the multiplayer options.
While we’ve had a chance to play a few competitive games, we
haven’t experienced the full gamut of modes and maps by any means.
We’ll update this review once the game is
released.

Verdict
Uncharted
3 sits in a long line of linear, cinematic action games, but it sits
right at the pinnacle of the style because it’s cinematic values are
so strong, its spectacle so dazzling and its action so very
satisfying. A magnificent blend of all that’s best about games and
blockbuster movies, and one of the most exhilarating experiences you
can have on a console.