The higher you climb up the price scale, the more your have to pay for each successive performance increase. A £20 pair of headphones can sound miles better than a £10 pair, but it’d be much tougher to judge between £110 and £120 sets, wouldn’t it? The Hisoundaudio Studio-V “audiophile” media player demands a certain appreciation of this principle. It’s a flash MP3 player that will set you back almost £300. But is it worth it over a £100 model?

Hisoundaudio’s Studio-V makes an imposing entrance. It comes delivered in a leather-bound box, complete with the kind of hinge you’d find in the casing of a £5k diamond necklace. We’re off to a classy start. 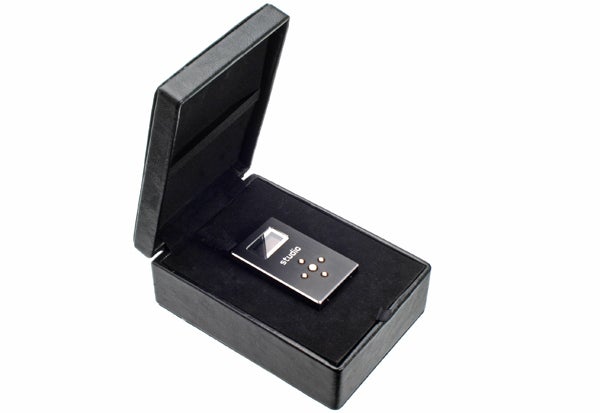 The player itself is only an eighth the size of this box – the rest must be taken up with all that pomp and circumstance. Thankfully, the sense of quality and ceremony doesn’t fall apart when you get hold of the player. The body is made of thick brushed metal. The front buttons are metal too, while the back has a mirrored finish.

The brushed metal finish will likely soon get scratched and tarnished with careless use, especially as it is painted black rather than showing the bare metal. However, it’s one of the sturdiest media players we’ve ever come across. Muscle-bound as we aren’t, we couldn’t get the Studio-V to flex even a fraction of an inch. 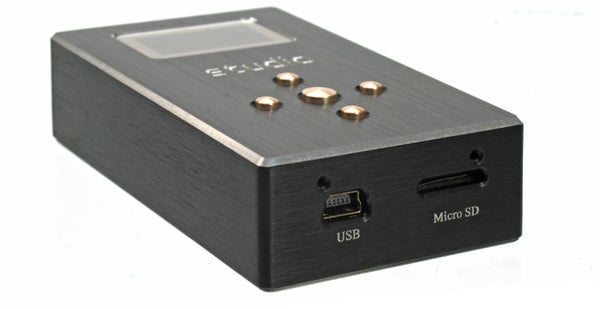 Quality materials aside, the design of this player is extremely simple. It’s a metal matchbox, with edges that are each bevelled rather than curved. They’re not sharp but they are severe. Throw this media player at someone in anger and you can expect an ABH charge.

The Hisoundaudio Studio-V comes with 4GB or 8GB of internal memory built-in, which can be accessed like a standard USB pen drive when plugged into a computer using the miniUSB slot on its bottom. Next to the miniUSB is the microSD slot, letting you boost memory by up to 16GB. 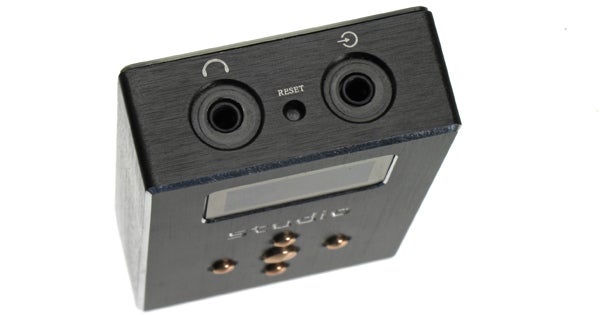 Both sides of this miniature metal fag packet are blank, while the top is home to the 3.5mm headphone jack and 3.5mm audio input. Yes, you read that right folks. The Studio-V doesn’t feature a second audio out, but an audio in. That shows you how much confidence Hisoundaudio has in the built-in DAC and headphone amp. Of course, if you want to output sound to some speakers, you can simply use the headphone jack.

Like most Far East-derived MP3 players more dedicated to their sound chips than software, the Hisoundaudio Studio-V’s interface is ropey. It’s controlled completely using the five buttons on the player’s front, which act as a D-pad and select button.

The basics of the system are familiar enough, letting you browse through your library using ID3 tags, by album name, artist, genre or year. However, navigation is peppered with idiosyncrasies that mark it out as a less-than-stellar system. It’s the same effect we saw in the similarly audio-focused Cowon X7.

Presses on the select button either take you back to a previous menu, select or shut the player off completely, dependent on context and length of press. And it’s all-too easy to get them mixed-up – just one example of the many quirks you’ll have to get used to here. As stuck in the past as the interface can feel at times, reminding in particular of iRiver’s rather excellent 2004 H140 player, the screen is remarkably clear considering its teensy 1.1in size. It’s down to the OLED tech used in the display. 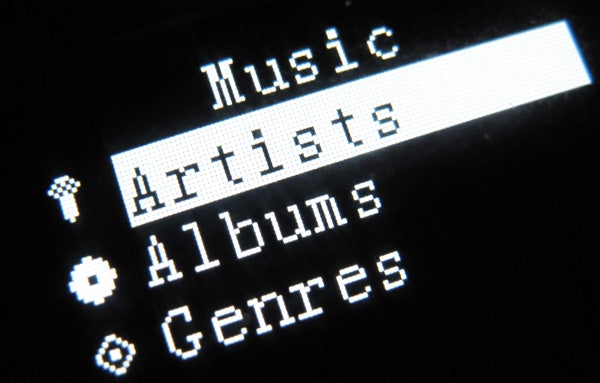 OLED doesn’t use a traditional backlight, instead each pixel is individually illuminated. This gives near-unbeatable contrast and makes the monochrome display here look pin-sharp. That small size is always going to make browsing through a large music library something of a chore though, especially as the interface hasn’t been sufficiently tailored for big collections. Using FLAC, the 4GB edition will be full up after around 20 albums, but that figure will be significantly higher using 320kbps VBR MP3s, or with a microSD equipped. Blind tests suggest that very few can tell the difference between the two formats. Still, ever with the “audiophile” in mind, the Studio-V can play lossless FLAC files, alongside WAV, WMA and MP3. 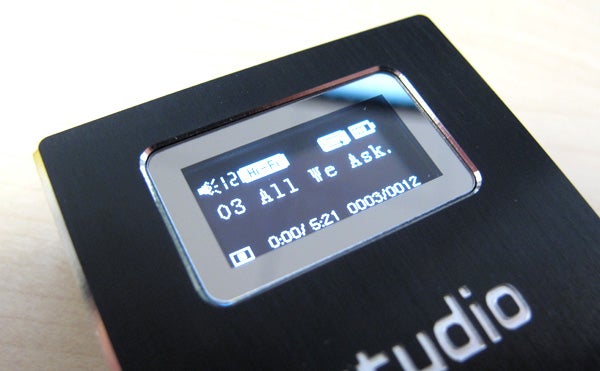 It does little else besides. There’s no radio, no mic for audio recording and – thank god, given the screen size – no attempt to include video playback or games. This really is a device for those who sneer at 256kbps bit-rates and drool over headphone amps. However, this pure, stripped-back approach won’t mean anything if the Hisoundaudio Studio-V can’t come up with the musical goods. So let’s see how it fares.

Our ears aren’t to be trusted. The placebo effect can work just as well with high-end audio equipment as it can with pharmaceuticals, so the only real way to test out a device’s mettle (and metal, in this case) is in direct comparison. Out first contender is the Apple iPod Classic, a DAP often criticised for its middling audio quality.

Does the Hisoundaudio Studio-V blow it out of the water? Not really. This has as much to do with expectation as ability though. The vast majority of popular MP3 players are actually rather good audio performers, so the difference between most players isn’t going to be the grand leap you might expect. It’s subtle compared with the difference between a cheap pair of earphones and a high-end pair like the Phonak PFE 112 or Shure SE535, for example.

We advise you manage your expectations, before you’re stuck with managing your disappointment. 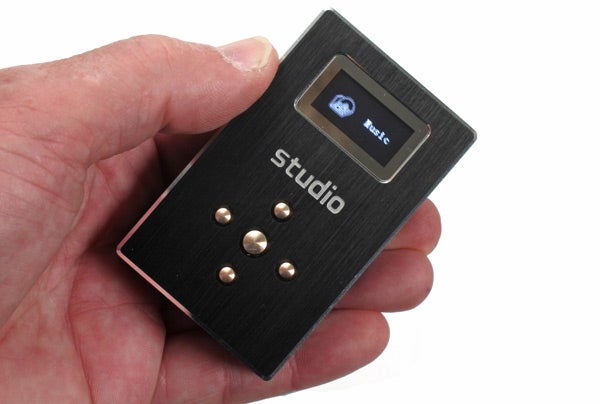 The Studio-V does offer better sound quality than the iPod Classic, with slightly better treble extension and detail, and the sound is uncoloured. It doesn’t bring valve-like warmth or increase soundstage hugely – and we tested the player with a wide range of earphones and headphones. The player does sound good, but not £300 good. There’s also a slight hiss in the background, not present in the iPod Classic, that may annoy and it’s highly susceptible to interference from mobile phones – unlike most modern media players.

We do have some concerns about Hisoundaudio’s claims about the Studio-V’s insides too, which could help explain the subtlety of this performance boost. The player claims to feature a class-A amp, but the combination of the following doesn’t make a great deal of sense – a) Class-A amps are the least energy-efficient type b) the Studio-V has a claimed 100-hour battery life c) The player isn’t that heavy or large d) and much of its weight is from the thick metal body, so it can’t be all-battery. Oh, and e) it doesn’t get particularly warm, as you’d expect from a class-A amp device. Hisoundaudio claims there’s secret sauce “EMA (energy management arrangement)” technology at work here, but we’re not entirely convinced.

There’s clever physics, but this is starting to sound a little bit like magic. 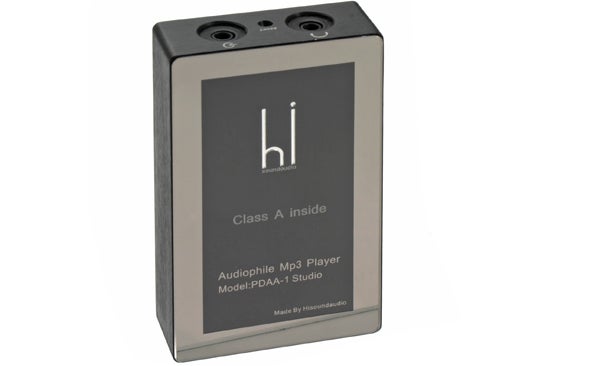 The idea that there’s something ever-so-slightly fishy going on is supported by US retailer MP4 Nation, which opened the Studio-V up to find a Sigmatel audio processing chip, as used in players costing a fraction of the price. Again, this doesn’t mean the sound quality is bad, just that it’s not what you’re primarily paying for here.

We plugged the Studio-V into an “actual” Class-A valve amplifier (an inexpensive one too) and found a more significant difference in tone than between the iPod Classic and Studio-V. As a final scrutinisation of the device’s skills, we used a line out dock to plug the iPod Classic into the player, using it as an amp rather than the source. Using the line-out of the iPod cuts out the Apple device’s own internal headphone amp circuitry. Switching between the iPod’s and Studio-V’s headphone jacks, there was a noticeable (if fairly slight) improvement in the tone of the high-end, which sounded more impressive through the Studio-V.

Hisoundaudio explains its lack of EQ options, of which there are none, saying that it wants the sound to speak for itself, but as it turns out the sound quality is not the greatest of orators. Granted, most EQ options are awful gimmicks that only serve to reduce sound quality, but we found actual use for the BBE options of the Cowon X7 and J3. The Studio-V just doesn’t offer the stand-out sound quality we’d expect of an audiophile device retailing for £279. 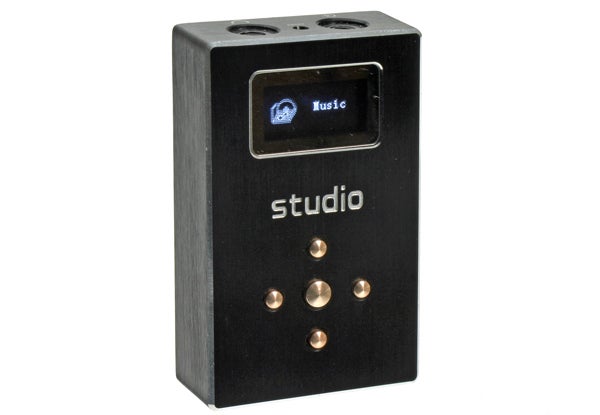 For that price, you could buy a 120GB Cowon X7 plus a Fiio E7 dedicated portable headphone amplifier. Or, even better, a pair of Ultimate Ears Triple Fi 10 earphones and a Sansa Clip player – and still save yourself some money.

The Hisoundaudio feels and looks like a high-end audio device. It’s simple, stripped-back and built with the strength of a rhino. However, while sound quality is good, it’s not quite good enough to justify the price tag and lack of features. Treble definition is a highlight, but there’s an audible hiss and mobile phone interference means it’s not all that at-home in the pocket of the average gadget fan.