You’d never tell to read the site, but we’re something of a bunch of evangelists for high-end audio kit at TrustedReviews. The thing is, though, as much as we’re prone to drooling over a pair of Sennheiser HD 800 headphones, or a set of Bowers & Wilkins Nautilus speakers (for which we’d trade family members, without a second thought), we also get just as excited by comparatively unimposing products such as, to pick an example completely at random, the FiiO E7 USB headphone amplifier and DAC combo. 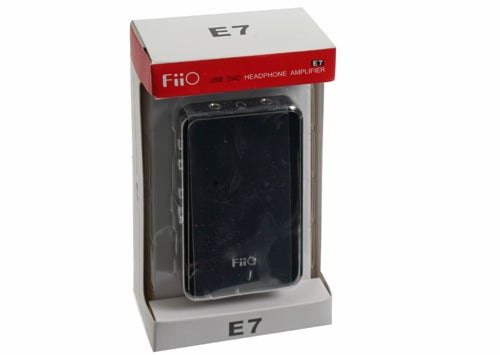 There’s good reason to be interested. The FiiO E7 might have a relatively accessible £60 asking price, but not only has the company making it built itself a good reputation in the portably amplifier space, but it’s also done a cracking job of outfitting the E7 with a great selection of components and features in an exquisitely styled casing.


Despite weighing a mere 100g, the black brushed-aluminium construction of the FiiO E7 gives it a high-end feel in the hand, and at about the same size as an old iPod mini (for those of you who remember that short-lived device) it fits nicely in a palm. Even the buttons are a work of brilliance, with a delightfully solid feel to their action that, again, inspires confidence in the quality of the device as a whole. Adding to the visual appeal, the clear plastic front has a curious slightly smoky, slightly shiny finish to it which is hard to describe, but looks fantastic.

Also commendable is the selection of accessories. FiiO bundles both a silicone case and a larger, soft case for slipping the E7 into, along with a surprisingly sturdy USB to mini-USB cable and a short (but not too short) 3.5mm interconnect cable for hooking up your player to the amplifier itself.

The FiiO E7 is adorned with both a mini-USB port and a proprietary docking port, but the latter isn’t currently used for anything save plugging the E7 into FiiO’s E9 desktop amplifier. Interestingly there’s a single aux-in jack, but there are two 3.5mm headphone outputs. Although that’s great if you want to share the device’s output with a friend, a line-level output, letting you use the E7’s DAC with a different amplifier might have been more useful.

There aren’t many controls on the FiiO E7, but then there’s no need for more than are present. The menu button is single-function, but the exit button doubles as a power control and the volume buttons also navigate through the E7’s menu system. This is a pretty simple affair, but it gives access to all the options you could want to change, so that’s hardly a damning criticism.


The included volume limiter is useful if you don’t want to accidentally destroy your hearing ability, and the key lock also comes in handy as the screen is left permanently on without it enabled. There’s also a toggle for charging over USB, which stops the battery from degrading if you’re using the FiiO connected to a USB source for long periods.


The only EQ setting is labelled “bass boost” but that’s not the best description of what it does. While upping the setting does indeed increase the bass presence, it’s not done in a blunt manner – at least on setting “1”, bass is made fuller and warmer but doesn’t feel forced or over emphasised. 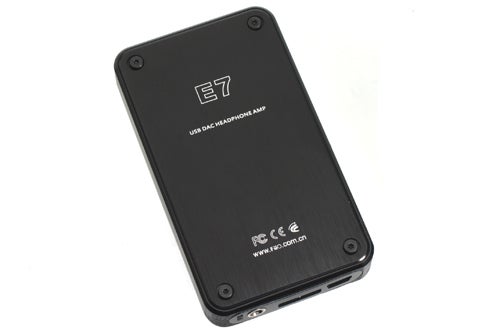 In fact, depending on the type of earphones you’re using, leaving the EQ turned off can make them feel particularly analytical – whether that’s a good thing will depend on your tastes. We found a pair of Grado GR8 headphones benefitted from having the EQ set to “1” but a pair of Etymotic hf3s sounded good without any EQ as they’re supposed to sound analytic. Settings “2” and “3” didn’t work especially well with any headphones we had available to test with, as both caused a noticeable treble drop-off.

The amplifier in the E7 does a great job of improving the output of just about any player you care to plug into it. We fed an iPod touch through the E7 and were immediately impressed with how much fuller the output sounded and how much larger the soundstage appeared. Many tracks were given an extra touch of nuance, with quieter, subtle background detail brought forward with improved presence. 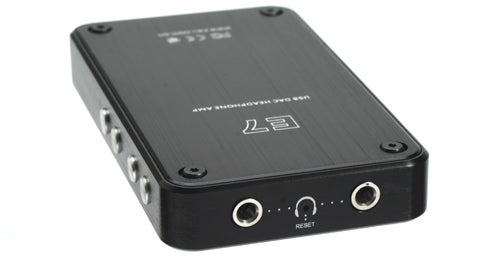 Even better results were had using a line-level output from the iPod’s dock connector, so that only the amp in the E7 was used, which removed a faint hiss previously present and cleaned up the high end a little. Bypassing our iPod’s amplifier also left the audio feeling much more natural in its presentation.


The E7 – EQ left untouched at least – doesn’t give quite the same warmth as the E5 headphone amp, but it definitely delivers more richness of tone and adds a depth to the soundstage that the E5 can’t manage. And the EQ setting works well to improve the warmth of the E7’s output should you want to do so.

It’s trite and it’s cliché to say it, but you really won’t want to go back to using the vanilla output of your media player once you’ve used the FiiO E7 for any length of time. With the caveat that you need to have good enough quality headphones to bring out the improvements provided, it really is a brilliant upgrade in sound quality.


There shouldn’t be any worries about the quality of the DAC in the FiiO E7. The Wolfson WM8740 chip is the same as found in the iBasso D2 Boa headphone DAC/amp costing some £100 more than the FiiO E7, and it works just as well in the E7. Listening to a number of tracks first through an iPod and then through the E7 hooked up to our PC the difference is profound.

While the amplifier may have done a good job of rounding out subtle tones, the E7’s DAC goes further to bring out detail previously rendered inaudible by both our iPod and PC’s own decoding circuitry. It’s always a delight to listen to a track and finally find yourself able to discern just what’s being said in that whispered dialogue over an interlude or to make out what the lyrics are to a song without needing to resort to the liner notes (or Google, if you’re not the CD-buying type). The latter achievement is particularly satisfying with a group like Band of Horses, where some of the words are deliberately sung in a manner intended to be hard to decipher (because screw you, that’s why). 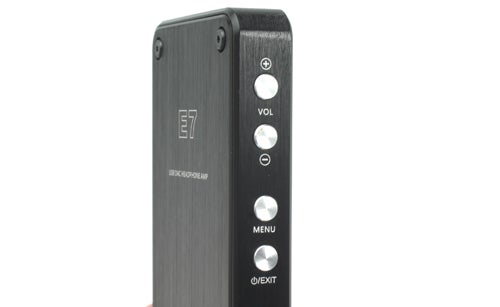 It’s worth noting that as is always the case with good quality audio equipment, you’re not going to get more out of it than you put in. Although its £60 price point makes the FiiO E7 a great entry level DAC/amp combo, it’s not going to make a pair of Apple earbuds sound like a set of Shure SE535 triple-driver IEMs. And even if you’re using some fairly high-end ‘phones, you’ll need to make sure you have good source material, too, because the FiiO E7 will highlight deficiencies in low bit-rate recordings. FLAC isn’t necessarily required, but 320kbps MP3s are as compressed as you want your files to be. After all, you wouldn’t watch VHS movies on a Kuro, would you? 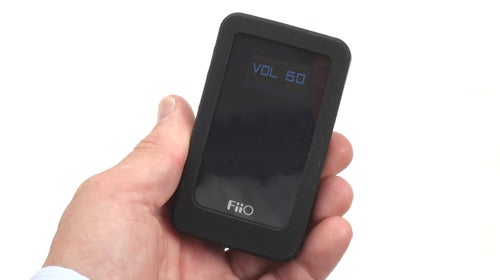 However, if you’re spending something like a hundred pounds or so on your headphones, we’d argue that £60 invested in the FiiO E7 will reap a much more noticeable improvement in audio quality than that same money spent on even pricier cans or IEMs. And while you’re likely to go through a number of headphones over the course of a few years, a good DAC and amplifier is an investment that should last much longer than that.


Considering the relatively low price, the boost in audio quality afforded by the FiiO E7 is nothing short of astounding. The competition is going to have its work seriously cut out in the face of this new champion of the price performance ratio for USB-connected DAC-equipped headphone amplifiers.