Hisense is not gunning for top spot, where insanely expensive flagship TVs from Korean and Japanese manufacturers leave little room to manoeuvre. Instead, this up-and-coming Chinese manufacturer is looking to establish itself in the upper midrange.

While the M7000 doesn’t stand a chance against a £5,000 UHD Premium OLED, it does enough right for a casual audience to justify making that leap to 4K and HDR – proof that you don’t need to spend thousands to have a decent picture.

Related: Best TV round up

Straight out of the gate, Hisense means business. From the front, this design wouldn’t look out of place in a line-up with more expensive TVs. There’s a lot of metal. I’m not entirely convinced the brushed effect of the frame goes with the shiny chrome stand, but I wouldn’t go so far as to say it clashes.

There’s plenty of plastic tucked away at the back, along with two knobs for cable management. The plastic feels tacky, but it was solid enough not to creak when I hoisted the TV onto my AV rack. Speaking of which, one person can just about assemble and move this thing, but my back would recommend another pair of hands.

Annoyingly, this is another TV that subscribes to the feet-far-apart school of stand design that insists you own a bench-style rack from Ikea. (Editor’s note: Other brands of bench-style rack are available.) Sure, it looks stylish and it does help to keep the TV stable, but its footprint measures 122 x 32cm.

A single remote control is supplied. Unlike the display, no effort has been made to make it look like a premium product, but it’s easy to use and it gets the job done. 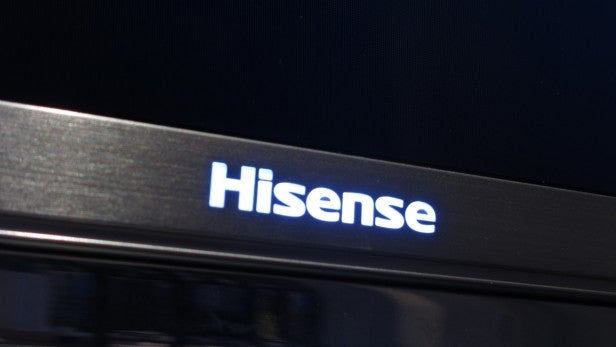 Hisense calls the M7000 a “ULED” TV, with a logo that looks suspiciously similar to LG’s OLED one. To avoid confusion: ULED refers to Hisense’s proprietary tech that uses small crystals for improved backlight control. The aim is to give an LCD the lighting precision associated with OLED. In short: fancy backlighting, but still LCD.

Hisense wouldn’t be drawn on a figure for peak brightness, but I’m told the M7000 operates at a typical brightness of 420 nits. That’s some way off the 1,000 nits required for UHD Premium certification.

To make up for this, Hisense has crammed the M7000 with connections. There are four HDMI inputs, two of which are HDMI 2.0 and compatible with HDCP 2.2, which means they’ll happily accept a 4K signal from your UHD Blu-ray player, Xbox One S or Sky Q. 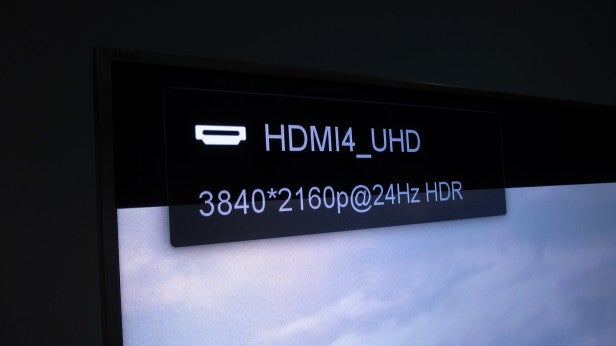 For legacy products, you also get a full set of composite and component sockets. I was surprised to see a SCART socket too, which gave me an excuse to start up my Nintendo Wii and realise it hasn’t aged well.

You also get three USB ports (one 3.0), for media playback or recording TV, plus digital optical out, headphone out, and Ethernet as an alternative to the built-in Wi-Fi.

Online services include hundreds of apps, but most of them can be ignored. The ones of note are Netflix and Amazon Video, both of which have 4K but not HDR at the moment. There’s also YouTube and BBC iPlayer. At the time of writing there was no sign of ITV Hub, All4 or My5.

Finally, there’s no 3D. I’m not too bothered about this, but people with a collection of 3D Blu-rays may feel differently. 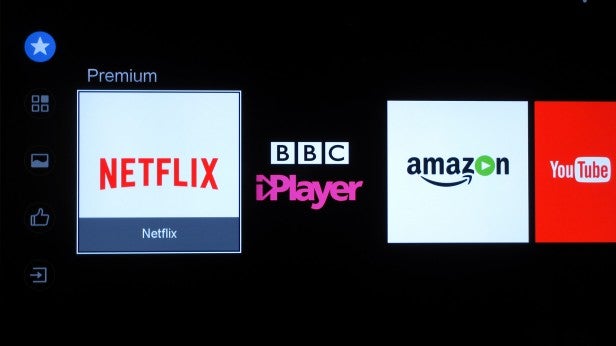 First things first, go into system settings and make sure you have the most up-to-date firmware. Next, turn off the Indicator Light Setting – the glowing Hisense logo gets annoying very quickly.

As for picture modes, I preferred a mildly tweaked Cinema mode. Backlight for SDR viewing should be around 20/100 for dark room viewing, (or 30 if you keep the lights on). Brightness can be kept at about 50, Contrast and Colour Saturation were a bit overzealous out of the box, so I pushed them down to 45 for a more natural look.

When an HDR source is detected, a separate HDR mode appears as an option. I’d put in the same settings, except now you can get away with pushing the backlight to 80 (100 with lights on).

Colour temperature should be set to Warm – Standard is a bit too blue – and Ultra Smooth Motion should be kept off to avoid unwanted artefacts. Sadly there’s no Custom option to manually tweak de-blur and de-judder settings. Noise reduction should be turned off to maintain sharpness.

The Local Dimming setting is supposed to adjust the backlight by sections according to changes in image, but I found it made very little difference. Adaptive Contrast is another matter: this clearly ramps up bright areas and turns down dark areas. It makes for a more striking image, but I found going any higher than Low made me lose out on shadow detail, and generally kept this off.

A word for gamers: you’ll want to select the PC/Game mode specifically, as this knocks down the input lag from 55.3ms to 36.1ms.

Related: Every Panasonic TV for 2017 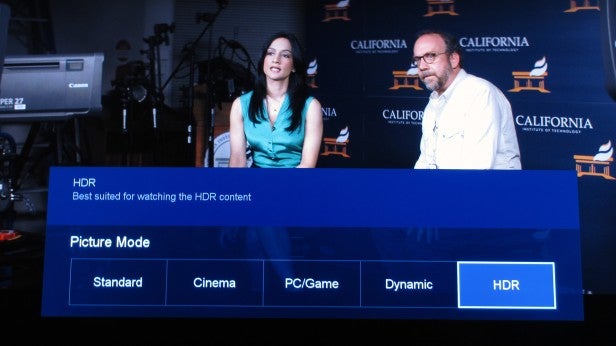 I was very sceptical about this TV at first. Hisense doesn’t have half the experience of its rivals, and surely there must be a catch if it’s this cheap, right? But I’m pleasantly surprised. This TV doesn’t have the accuracy and subtlety the AV hardcore might expect, but it does get many things right.

Take the lighting, for instance. It’s impressively uniform considering the edge lighting, and I’ll put that down to good local dimming. Even at its brightest, the screen manages to maintain its composure, with little in the way of halo effects.

Black levels are good too. They never reach OLED levels of inky darkness and subtlety, but it gets convincingly dark, with a decent amount of detail in shadows, and the black bars top and bottom of movies showed no noticeable light bleed in SDR or HDR. It’s only when the screen is overwhelmingly dark that you may notice some light clouding. If I didn’t know otherwise, I would’ve guessed the M7000 to be a direct-lit TV.

Related: Every Sony Bravia TV for 2017 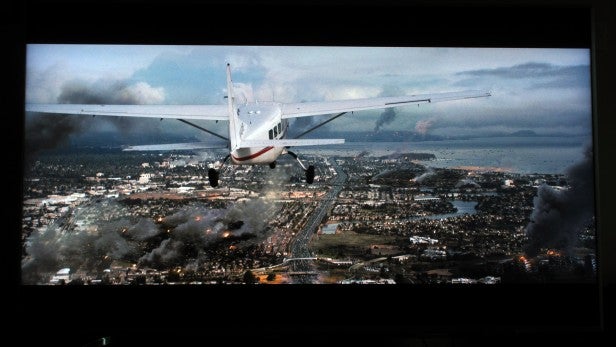 “But it’s not UHD Premium,” you might say. Indeed, this doesn’t reach the 1,000 nits boasted by even the most modest Samsung 4K HDR TV, and the result is less detail in the extreme whites and blacks.

Watch a 4K Blu-ray of Mad Max: Fury Road and the Hisense doesn’t dig out as much detail in the explosions and truck undercarriages as I’ve seen on more expensive sets. The reduced brightness range also affects the colours, which don’t enjoy as much such subtle gradation as perhaps George Miller intended.

But that doesn’t stop this Hisense from trying its best, and it manages to convey a good deal of the impact and dynamism I’ve seen from the best HDR TVs. If you’re merely looking for a step up from regular SDR Blu-ray, you’ll see a clear difference. And if you’re a stickler for uniformity, you might prefer this over the brighter, UHD Premium Samsung UE55KS7000, which does suffer from more noticeable light bleed.

It’s a sharp picture, clear and defined enough to delineate strands of hair or stubble, or the texture of somebody’s T-shirt. It looks best and least noisy in 4K, but Blu-ray looks just fine too, thanks to the M7000’s proficient upscaing. It’s only when you drop right down to standard definition DVD or Freeview that the picture looks distractingly soft.

I’m also impressed by the sound. It’s large and spacious, with decent tonal balance. Voices are clear without being harsh, and there’s enough weight too. I’d still use a dedicated sound system with proper speakers (or a soundbar) for movies, but I was perfectly content using the built-in speakers for an episode or two of The Great British Bake Off. 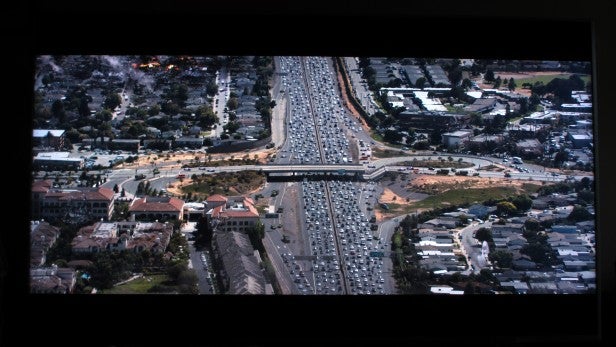 Hisense set out to make a good upper-midrange TV, and that’s exactly what it’s done. If you’re a hardcore AV enthusiast and you’re after the last shred of detail in shadows and highlights, this isn’t for you. The Hisense H65M7000 doesn’t have what it takes to beat the likes of the premium LG OLED65E6V or the Samsung UE65KS9500.

While the Hisense H65M7000 is not a UHD Premium TV, it does remarkably well for the money. It’s capable of showing off the 4K and HDR difference, and that goes a long way to making it seem great value. If you’re the owner of an older HD TV and you’re looking to step up without spending a fortune, you could do a lot worse than this.

For the casual movie fan upgrading from HD, this TV is a treat.