The £3,800 UE65KS9500 is Samsung’s flagship 65-inch TV for 2016. It’s chock-full of headline-grabbing features: an unprecedented, HDR-friendly peak brightness of 1,400 nits, a direct backlight system with local dimming, quantum dot colours, a curved screen, and what appears on paper to be the most advanced SDR to HDR conversion system the TV world has seen to date.

Samsung’s love affair with curved screens continues with the UE65KS9500. This will immediately put off some folk, making it a pity that the company doesn’t offer a similar specification in a flat-screened option. However, it’s an attractive look thanks to its slim and luxuriously finished frame, and the fact that it sits low on a glinting, T-bar stand.

The curve makes the TV look rather clumsy if wall-mounted, though, especially since its use of direct LED lighting gives it a deeper profile than most rival edge-lit sets.

As is usual with Samsung’s high-end TVs these days, the UE65KS9500’s connections sit in an external connections box, so that you only have to feed a single cable from the box to the TV. Unlike last year’s Samsung flagship TVs, it isn’t possible to replace this box in the years to come to upgrade the TV with future Samsung features and picture technology.

This is a shame given these uncertain AV times. Samsung claims it’s ditching the idea of its upgradeable connections box because consumers just haven’t taken advantage of it in significant enough numbers over previous years. 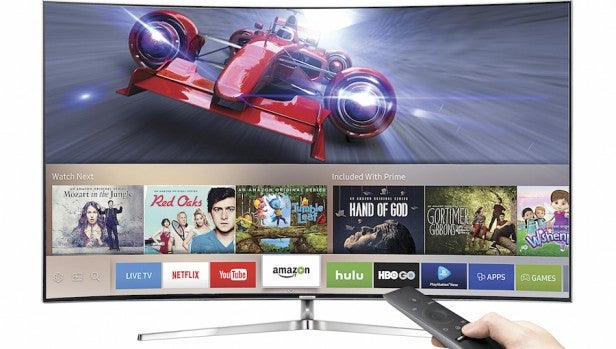 Four HDMIs – all able to take high dynamic range and native Ultra HD signals up to 60 frames a second – head up the extensive selection of connections. They’re joined by a trio of USB ports, headphone and tuner ports, and wireless and wired network options.

Apps available include the 4K and HDR versions of Amazon and Netflix (the HDR10 standard, not Dolby Vision). Samsung says all of the main UK catch-up apps will be supported at some point. At the time of writing, My5 and All 4 weren’t available.

It’s the UE65KS9500’s picture technology that really sets it apart from its lower-end siblings, particularly its use of direct LED lighting. Here, the screen’s lights sit directly behind the screen rather than ranged around its edges. Used with a local dimming system, the direct lighting option is clearly better equipped to handle the light extremes introduced by the arrival of HDR.

This is especially true when you’re talking about a TV capable of outputting as much brightness as the UE65KS9500. It pumps out a measurable light output in excess of 1,400 nits, which pushes far beyond the light output witnessed on any previous TV. LG’s latest OLED TVs, by comparison, can only muster around 700 nits.

That being said, OLED TVs are capable of hitting much deeper black levels. They achieve vastly more localised light control than any LCD technologies. 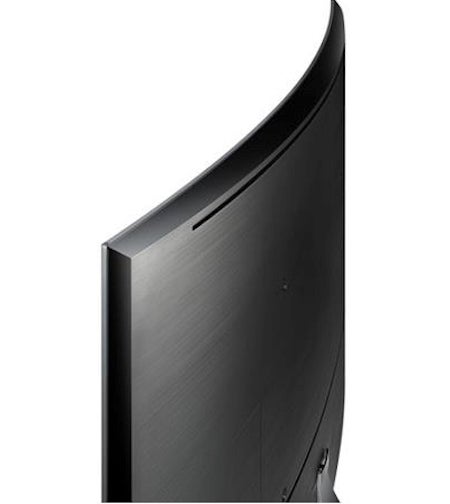 On paper, the UE65KS9500 appears exceptionally well equipped to handle the wide colour spectrums that accompany the majority of HDR content.

It sees Samsung shifting back from its Nano Crystal technology of 2015 to a proprietary take on Quantum Dot technology. It lets the UE65KS9500 get to around 95% of the DCI-P3 colour standard, more than the 90% you need for the industry’s UHD Premium badge.

Samsung has introduced an “HDR+” system for upscaling standard dynamic range content to HDR. The company claims HDR+ goes much deeper than rival systems in the way it works to “upgrade” SDR sources. Its results come from a processing database developed by Samsung engineers. Apparently they spent countless hours poring over SDR and HDR versions of the same content to identify the chief differences.

One last thing to mention in this section is something the UE65KS9500 lacks: 3D support. Samsung has called time on 3D across its entire 2016 TV range.

When watching HDR, one key setup point to remember is that the Standard picture preset uses a fairly low backlight setting, which doesn’t deliver a full HDR experience. Samsung has had to use such a setting in order not to fall foul of the EU’s stringent TV power consumption regulations.

So, if you want to get a true HDR experience with the Standard setting, you’ll have to manually up the backlight to its maximum 20 level.

To achieve the most accurate HDR image you should switch to the Movie mode for HDR viewing. You’ll need to up the Dynamic Contrast feature to its medium or high level from its default Off position.

Movie mode delivers a markedly more subdued HDR look than the other picture presets. But if accuracy is your thing, then a slightly tweaked version of Movie mode is what you should aim for.

With SDR content, I’d recommend making sure the backlight is reduced to below its 50% level if your room is reasonably dark. You could also establish a separate daylight viewing setting with the backlight set to around 13.

Turn off all noise-reduction facilities while watching any Ultra HD or good-quality HD source. You shouldn’t use Samsung’s motion processing on a very high level, if you want to avoid the picture looking processed.