Hearthstone’s last expansion, The Witchwood, brought with it the Year of the Raven – which rotated three previous sets out of Standard. Despite The Witchwood’s additions, it left the game feeling shallow. The pool of cards had shrunk, meaning the variety in deck building felt constricted.

The game’s latest expansion, The Boomsday Project, feels extremely welcome, helping to boost the cardpool and provide more room for experimentation. It’s early days but there’s a lot of interesting cards and combos that are already seeing play.

Boomsday focuses on Dr. Boom, and old favourite in the world of Hearthstone, having has returned to his lab to create a seemingly endless variety of strange experiments and powerful machines. Mechs are a big focus of the expansion: This archetype has been given a new range of tools and tricks that makes them shine in a way they haven’t since Gnomes vs Goblins.

Related: All we know about Artifact 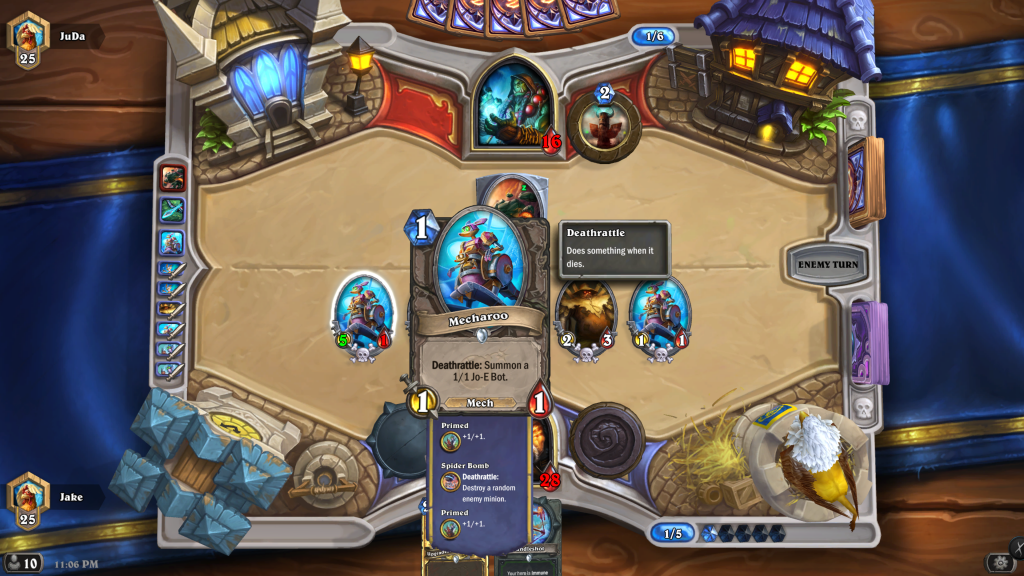 Magnetic is The Boomsday Project’s new keyword. It’s an ability purely printed on mech cards, and it allows you to combine multiple cards into one big machine. Play a magnetic card to the left of a friendly mech and the two will fuse together. This will cause their stats to merge and this new minion keeps the abilities of both cards.

It’s an ability that rewards players thinking on the fly. Is the board overrun by your opponent’s minions? Stick a Spider Bomb to a mech with taunt and force them to burn through their creatures to remove it. Do they have a big minion you need to get rid of? Drop a Skaterbot onto a Venomizer and use poison to get rid of it.

There’s a nice balance of risk and reward with Magnetic. You’re forced to assess whether it’s better to stack all of your mechs together into one powerful minion, or keep them seperate in order to avoid your opponent’s removal spells.

Following on from the theme of giving each class a legendary weapon, each gets a legendary spell in Boomsday. These have some potentially game winning effects, from drawing your entire deck with Myra’s Unstable Element to reducing the cost of all minions in your deck to one with Luna’s Pocket Galaxy. They’re powerful enough to shape your strategy around, though most are heavily reliant on being in the right type of deck.

The one that I’ve seen most so far is Kangor’s Endless Army, with resurrects three friendly mechs. The mechs keep all of their magnetic upgrades – you can build big mechs without worrying, and resurrect them after drawing out your opponents removal. 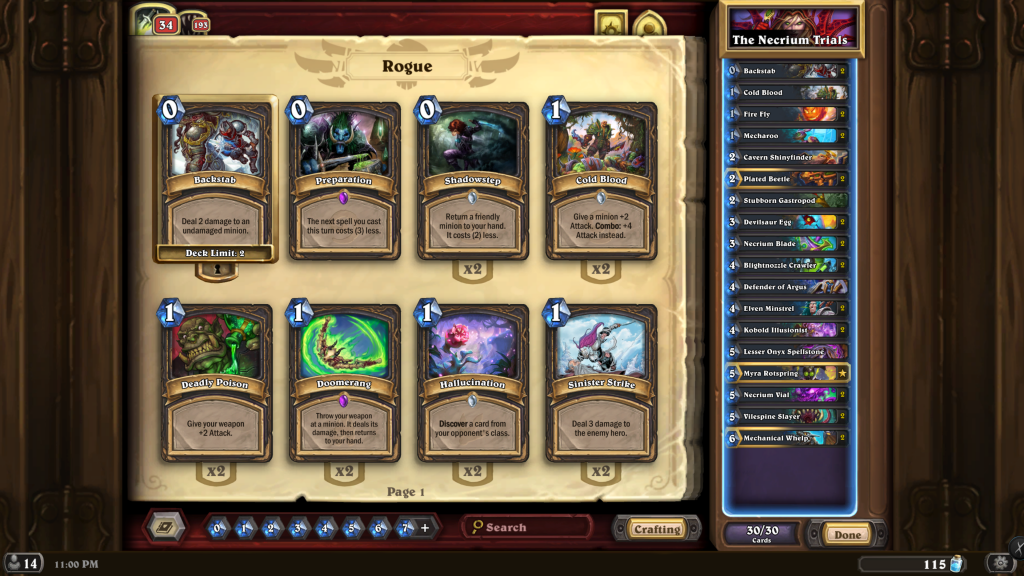 Another Boomsday subset are the Omega Cards. They tend to be cheap, fairly average cards if dropped early in the game, but gain additional powers if you summon them once you have 10 mana crystals.

It’s still early days, and things will change as the dust settles, but the expansion has done little to harm druid’s position at the top of the tier rankings. Both of the classes more formidable decks, Token Druid and Malygos Druid, get some tools to make them even better.

Floop’s Glorious Gloop allows the former to have a big turn by gaining a mana crystal everytime they lose a creature; while Flobbidinous Floop allows the latter to create another copy of their key combo piece, Malygos.

Outside of the top of the top tiers, paladin, warrior and hunter are all seeing a lot of play. They all benefit from magnetic, and are battling it out to be the new home of the mech, 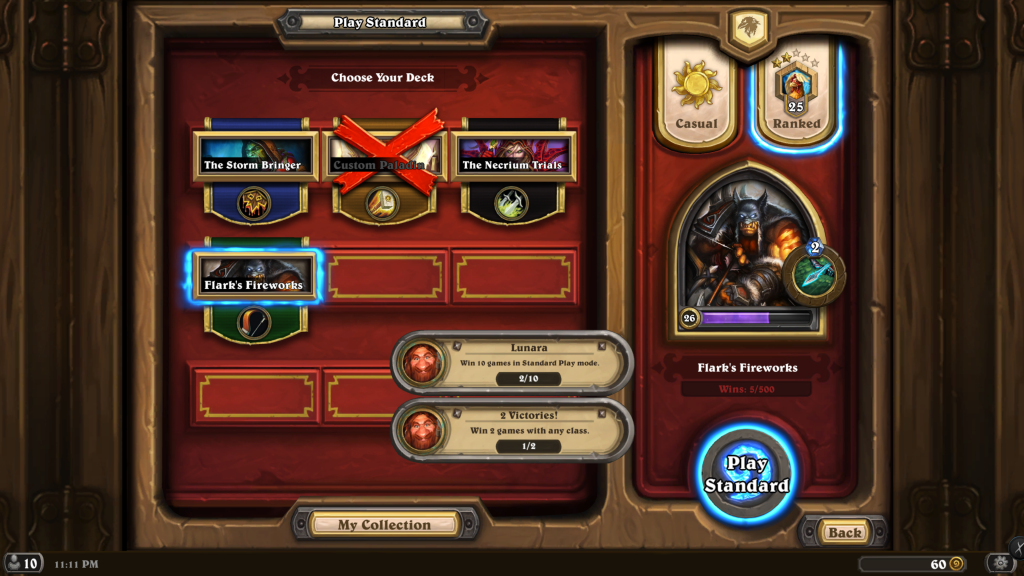 Warrior features the expansions titular Dr. Boom. The hero upgrade buffs all your mechs with rush for the rest of the game, allowing you to up the tempo and push for a win. Expect decks that hit hard after dropping Dr. Boom, then refresh their minions using Omega Assembly.

Hunter gets some of the best magnetic minions. Spider Bomb and Venomizer are both extremely good at removing your opponents key pieces, while Fireworks Tech allows you to buff your mechs and trigger their deathrattles early. It might not reach the top tiers, but a build that summons a load of Goblin Bombs and forces your opponent to destroy them is a lot of fun.

The Doomsday Project brings a lot of genuinely interesting new cards, abilities and archetypes into the game. Rogue gets even more tools that allow it to steal and cast cards from their opponents class, shaman gets cards that allow it to focus on casting big spells, while warlock gets the impressive Doubling Imp, which once buffed brings a lot of stats for only three mana.

As exciting as the card set is though, there’s not a lot in it that feels focused towards newer players, and for a game that feels increasingly inaccessible, that’s a big problem. So many of the key cards needed for the more competitive decks are the rarer ones. 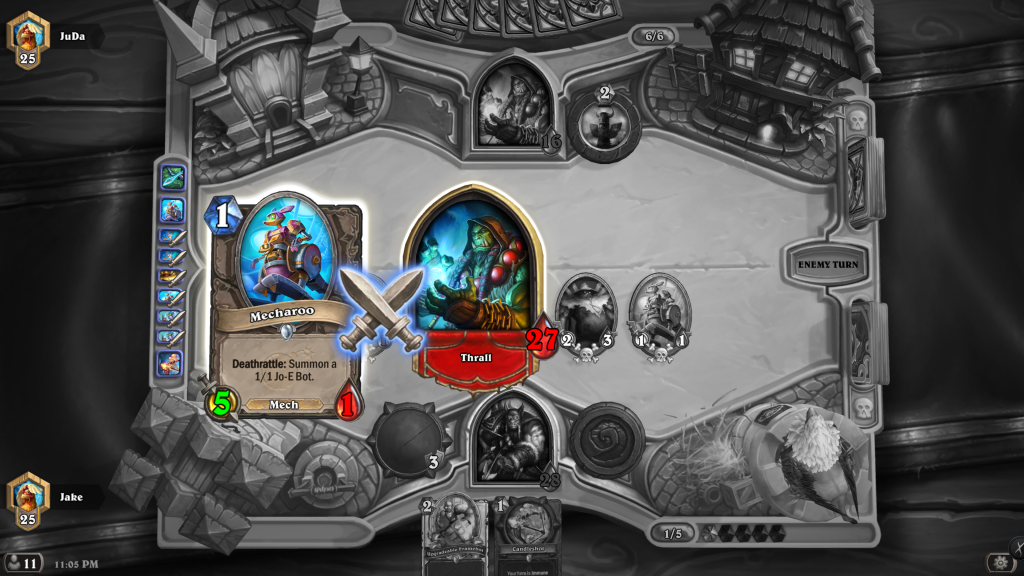 It wouldn’t be too much of a problem, if it wasn’t for the prevalence of netdecking. Even at the lower ranks of play it felt like most decks faced were cribbed from online decklists, meaning that experimental decks or those constructed from limited card pools faced relentlessly tough match-ups. The buy-in to just have a competitive deck feels higher and higher with each release.

Which would be fine, if only there were more ways to play the game. The single player modes from Kobolds & Catacombs and The Witchwood are some of the game’s best additions, personally on beaten by the quietly released “Borrow Decks” button. I just wish there was more.

Card games are at their best when you’re sat across from a friend, trying out silly combos, yet Hearthstone’s modes do little to encourage it. It would be great to see some changes in the modes – ways to bring new players into the games and increase their card pools, giving them more ways to play tournaments and drafts against friends.

The Boomsday Project is great if you’re already invested, as it breathes new life into the game and has some genuinely fun and interesting cards. If you’ve been staying away though, there’s not a lot to draw someone back. Hopefully the new single player content, The Puzzle Lab, changes that.

We’ll update our review when it arrives, but the single player dungeon modes were the best parts of the last two expansions, and though this is a different format it promises to be interesting. There are over 100 challenges to beat, with a card back to win for beating the boss Dr. Boom. The expansion is out now, with The Puzzle Lab releasing on the 21st August.