What is the GoPro Hero 4 Black?

Up until the recent launch of the GoPro Hero 5 Black, the Hero 4 Black proudly sat as the flagship action camera from GoPro. It was the first GoPro to support 4K at 30fps, where previously this was limited to a far more jittery 15fps.

While the Hero 5 Black introduced a number of important improvements, such as waterproofing without the need for a case, electronic image stabilisation, GPS and a touchscreen as standard, many aspects haven’t changed, such as the top resolution.

As such, the Hero 4 Black can still meet your requirements, even more so if you can find it at a reduced price in light of the GoPro Hero 5 Black. Video quality from the Hero 4 Black is still superb for those not looking to spend as much.

If you want to speed up time rather than slow it down, time lapse is available at intervals from 0.5 to 60 seconds. Alternatively, you can turn on looping, for those who want to use the GoPro as a dashboard camera in their car or on a helmet when riding a bike. In this mode, the oldest files are replaced by newest ones when the memory is full. 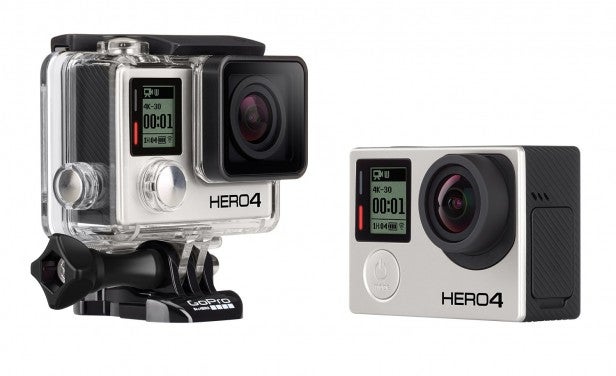 GoPro hasn’t diverged from the 1/2.3-inch sensor used in the Hero 3 and 3+ Black for the Hero 4 Black, and it still has 4,000 x 3,000 pixels, making this a 12-megapixel CMOS. This is a decent size for an action camera, and at the large end of the scale for camcorders in general too – although not huge compared to a DSLR.

The GoPro Hero 4 Black comes with a small selection of mounts. There are adhesive bases for flat and curved surfaces. There are two different lengths of clip, plus two link extenders that rotate the pointing direction by 90 degrees, and can be used together to create a pivot arm. The bundled waterproof housing is rated for a depth of up to 40m. There’s also an open back you can use when attaching the optional LCD.

Similar to previous GoPros, the Hero 4 offers only a small low-resolution LCD on the front as standard to see your current settings. This allows most controls to be configured, albeit with good eyesight required, but it won’t show you what the camera is viewing. For this, the optional BacPac LCD, which costs an extra £55 for the Touch version, is required.

Including this deficiency, the bundle is nowhere near as generous as less-well-known brands such as ISAW with its Edge and Wing models. However, being the market leader, GoPro has a wealth of optional extra mounts, from chest harnesses to head straps, to floating hand grips, suction cups, handlebar mounts, dog harnesses… and so on.

The possibilities are almost endless at the GoPro store. There are also three different Black bundles – Standard, Surf and Music – and all come with different housings and mounts. The Surf bundle is shown above.

One way in which GoPro has differentiated itself from other action camera manufacturers is by offering serious manual controls, in particular the ProTune settings. These provide white balance presets for a selection of colour temperatures – although no manual option – alongside a flat colour profile aimed at more flexible grading in post production.

The ISO limit cuts down graininess in low light, at the expense of brightness, with up to 6,400 available in video mode and up to 800 in photo mode. The ProTune settings also include three levels of sharpness, exposure compensation with nine levels from -2 to +2 EV. Perhaps most significantly, higher data rates are used for some shooting resolutions in ProTune mode, although not in 4K. 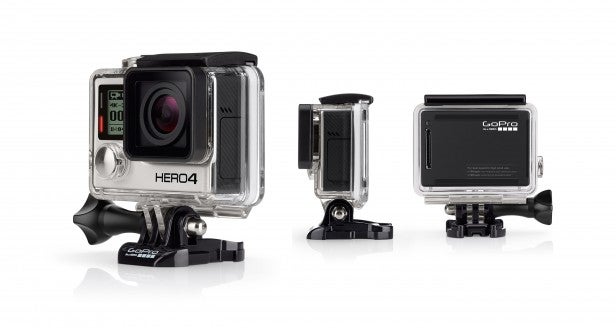 Sundry non-ProTune features include Auto Low Light, which adjusts shutter and frame rate to maintain brightness. You can also capture night photos with a shutter open time of up to 2 seconds in auto mode, or for preset times up to 30 seconds. With no LCD preview, however, it will take a little trial and error to get this right.

Accessing all these settings via the tiny, front LCD screen is somewhat difficult. Fortunately, the Hero 4 has built-in Wi-Fi, so you can control it via the GoPro app that’s available for iOS and Android. This includes an automated pairing function to make configuring the camera’s Wi-Fi settings easier, and which also makes it far simpler to change settings. However, using Wi-Fi and the app reduces the battery life by a quarter, to a rather measly 50 minutes in 4K.

It isn’t without reason that GoPro hascornered the market. Aside from keeping reasonably ahead of the curve on features, image quality has been consistently impressive too. The Hero 4 Black certainly provides the best 4K quality I’ve seen from an action camera, although not in the same league as 4K-shooting cameras and conventional camcorders. Colour is good, but the image is a little soft due to the 60Mbits/sec 4K data rate, which is a lower than the top consumer 4K camcorders, and equates to HD at 15Mbits/sec.

The 240fps 720p mode is reasonably impressive, although iPhone 6 owners will be used to this shooting speed. Quality is decent, considering that the shutter has to run at 1/240th, although the image is very soft.

It’s worth noting that the Hero 4 has no image stabilisation (IS), which is beginning to appear on action cameras from some other manufacturers – such as Sony. While IS won’t be particularly effective in extreme sports with very jerky motion, it would have been useful for less frantic recording.

The sweet spot for image quality is probably Full HD running at 24, 25 or 30fps, with ProTune enabled. This then records at 45Mbits/sec, which is well above AVCHD, and the differences are noticeable. ProTune doesn’t increase the data rate for 4K, but it’s 50% higher for Full HD. So unless you need the extra resolution of 4K, Full HD with ProTune provides the must professional image quality.

Although the GoPro records only mono audio internally, there’s a USB adapter available that lets you hook up a stereo microphone instead. So although the built-in audio isn’t great, there are alternatives if this is important for your productions.

Should I buy the GoPro Hero 4 Black?

The Hero 4 Black just about keeps GoPro at the top of the pack. Most importantly, image quality is excellent for an action camera. The range of shooting resolutions available is bewildering, with only high-speed 4K missing, and that would be a lot to expect from a tiny action camera – although I’m sure it will be coming soon, with 8K rumoured for the Hero 5.

This is an expensive option, considering that the mounting bundle included is really just enough to get you started, and the LCD is an optional extra, where competitors half the price such as ISAW give you more for half the price. But where the GoPro Hero 4 Black loses out on value, it gains in performance, core abilities and reliable image quality.

The GoPro Hero 4 Black is an expensive action camera, but it’s packed with shooting options and provides great image quality.