What is the ISAW Edge?

The Edge is the new flagship 4K action camera from Korean manufacturer ISAW. While the market for regular camcorders appears to have died a bit of a death in the last couple of years, new vendors in the action camera market have been popping up faster than daffodils in Spring. ISAW has been around for a few years now, however, and with a Sony Exmor sensor at its heart the Edge has plenty of potential.

To say that the Edge looks like a GoPro HERO would a considerable understatement. Even the shiny metal buttons on the waterproof housing are a dead ringer. However, where GoPro has a tendency to charge you extra for a LCD screen, the Edge has a 1.5-inch display built in. With its top 4K video shooting resolution, the Edge is really trying to grab a few purchasers away from the entrenched GoPro HERO range.

ISAW hasn’t published a lot of details about what is inside the Edge, other than that it’s a Sony Exmor CMOS with a 16-megapixel resolution. So there’s no indication of how big it is. The Edge itself is tiny, just 22mm wide, although the lens protrudes a little from this. There’s a compartment for a removable 1,000mAh battery, and ports on the side for microSD, mini USB, and mini HDMI. ISAW claims a two-hour battery life from the 1,000mAh unit, and I found this about right during testing. 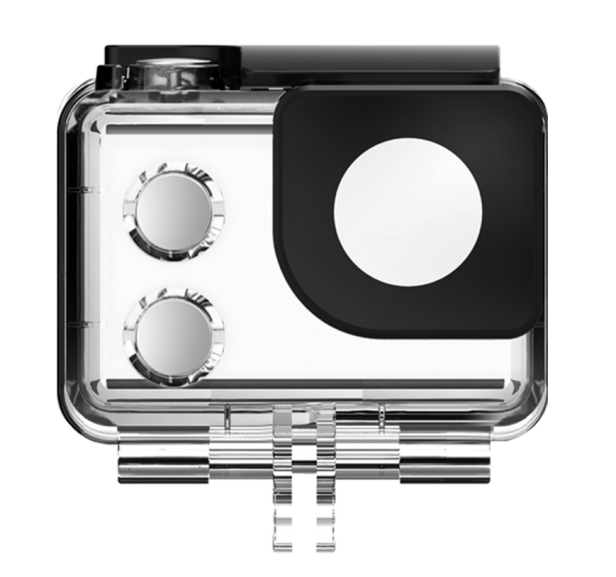 Overall, the build of the Edge itself doesn’t feel quite as robust as a GoPro or some of the other name-brand action cameras from Panasonic, Garmin and TomTom. But the bundled waterproof housing is sturdy enough, with a solid double-locking clip on the top to keep the camcorder secure. The housing boasts waterproofing to 40m, so should be good for snorkelling and surfing, so long as you don’t let it fall to a depth.

Considering the huge brand cachet that GoPro now has in the action camera market, virtually all other manufacturers have to do quite a lot to lure buyers away from the incumbent. To this end, ISAW is very generous with its bundled mounting kit. Not only do you get a suction cup mount in the box, but also a handgrip mount, which has a standard screw hole at the end so also doubles as a tripod mount. 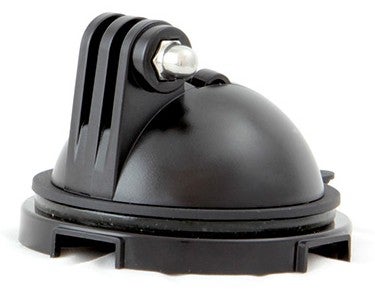 But that’s not all. Inside a supplementary box can be found a non-handgrip tripod mount, plus adhesive mounts for flat and curved surfaces, both of which are supplied with an extra pad each to enable reuse. The adhesive mounts use a quick-release shoe, so you don’t need to unscrew the camera to remove it. There are extra links so the camcorder can be extended from a mount, and rotated 90 degrees as well.

There’s a non-waterproof housing included, making the LCD panel more visible and the buttons easier to press, for situations where you’re not worried about liquid ingress. A screw-fitting lanyard is included, which you can attach to the end of the handgrip to avoid drops. The handgrip doubles as a float, too. There’s a padded carry pouch thrown in as well, to put all this bounteous mounting goodness in when travelling. 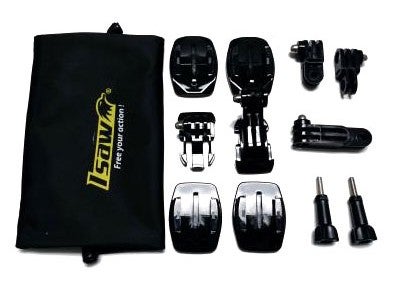 All in all, there are mounts in the box for virtually every situation, but just in case you have other needs, ISAW has a comprehensive selection of optional extras too. I was sent the chest mount (£26.70 inc VAT), head strap (£14.70 inc VAT), and a mount for screwing the camcorder onto a metal bar (price not yet published). But there is also an extended suction mount (£22.70 inc VAT) and a surfboard mount (£14.70 inc VAT) available.

The accessory catalogue doesn’t stop there. It’s also possible to obtain an AV cable, WiFi remote (a little pricey at £64.70 inc VAT), a waterproof housing able to withstand depths of 100m (although this hasn’t been released for the Edge yet), home and car chargers, and a 3.5mm microphone jack adapter. The only omission I could think of was a telescopic handgrip, and those are readily accessible elsewhere anyway.

The Edge’s settings can be accessed via the non-touchscreen LCD screen and the three buttons on the device itself – two on the front, one on top. This is a little unintuitive to begin with, as navigation requires a combination of short and long presses, with button functions changing depending on where in the menu you are. The quick start manual is not completely helpful with this, although once you’ve figured the controls out they make reasonable sense.

There are many video resolutions available, all the way from the headline 4K (actually UHD at 3,840 x 2,160) down to 720p. While the latter is available at up to 120 frames/sec, Full HD maxes out at 60 frames/sec, and the 4K only 10 frames/sec. The 4K frame rate is lower than the GoPro HERO3+, and a little behind the times when https://www.trustedreviews.com/panasonic-hx-a500-review Panasonic’s HX-A500 managed 25 frames/sec over a year ago.

Still, having 4K at all in a sub-£200 action camera is commendable. There’s also a timelapse option with intervals available from 0.5 seconds to 30 seconds, and a colour section with black and white, sepia, vivid and natural settings. The My Tune option is another homage to GoPro, although it doesn’t go quite as far as the latter’s Protune, including controls for sharpness, exposure, ISO, auto-exposure metering mode, white balance setting, and wide dynamic range. There’s no manual white balance option, but you do get daylight and cloudy outdoor settings alongside tungsten and fluorescent indoor lighting settings. 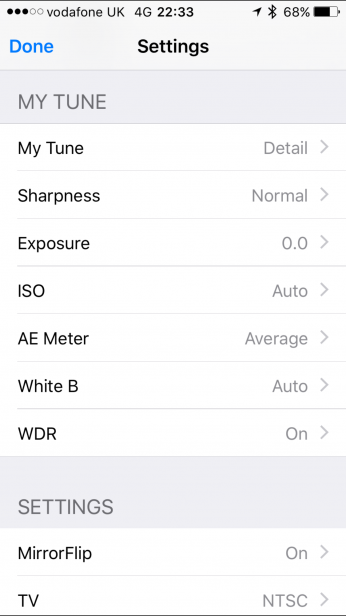 As with any self-respecting action camera these days, the Edge has built-in WiFi and there’s a smartphone app available for iOS and Android, which had just hit version 2 before I began this review. This gives you all the recording and setting controls on the camcorder itself, plus the ability to copy footage off to your phone. However, I found it rather unreliable on an iPhone 6 Plus.

Taking advantage of the variety of mounts I had been supplied with, I tried the Edge in a number of example situations. Using the chest mount, I went for a run, but unfortunately the camera firmware crashed and the nothing was recorded. After updating the firmware to the latest version, I then installed the suction mount in a car, and it worked just fine.

The Edge produces good image quality, although the same data rate is used for 4K and Full HD, so less aggressive compression is used with the latter. The Sony Exmor CMOS is clearly doing its job well, with realistic colours and a good level of detail. The CMOS also shows its value in low light, although https://www.trustedreviews.com/garmin-virb-xe-review Garmin’s VIRB XE surpasses it in this respect.

There is considerable lens distortion around the edges of the picture, but this is the price you always pay for a wide angle of view. Unfortunately, there’s no built-in correction for this, so if you want to straighten things out it will need to be done during editing.

Should I buy the ISAW Edge?

There’s no denying you get a huge amount for your money with the ISAW Edge. For under £180, the mounting bundle alone will win it many friends. This would be of little use if the image quality wasn’t up to snuff. Fortunately, the Edge does deliver in this respect. The current stability of the smartphone app is a worry, though, and ensuring you have the latest firmware is a necessity. But if the extra £100 (or more) for a GoPro HERO4 doesn’t sit well, this is a pretty decent alternative.

The 4K shooting may be the ISAW Edge action camera’s headline act, but the bounteous mounting kit is what makes it great value.