What is the GoPro Hero?

Like The Fast and the Furious reboot simply becoming Fast & Furious, GoPro has simplified the naming of its latest entry-level GoPro. Now it’s just the GoPro Hero, sitting below the GoPro Hero5 Black and the flagship GoPro Hero6 Black.

Now that the cubed Session models have technically been discontinued – although they’re still widely on sale – it means there’s a unified design between all of GoPro’s current action cameras (putting aside the 360-capable GoPro Fusion).

But, this being the entry-level budget-friendly option, it does mean it’s less capable than its bigger brothers. GoPro is really positioning the Hero as an inexpensive travel companion, letting you capture life’s great moments with ease.

It manages this for the most part, but some of its limitations compared to the more expensive models do feel at odds with its travel-friendly marketing.

In a lineup, you’ll struggle to tell GoPro’s latest models apart. They’re all almost identical, save for the marking on the edge of the camera’s body.

Unfortunately, this is obscured when the camera is in one of its mounting frames. So if you happen to have a bunch of different GoPro models because you’re Instagram’s latest parkour sensation (or just really like GoPros), it’s worth putting a sticker on so you can tell them apart at a glance.

The upside of this shared design means that if you’ve used a GoPro since the Hero5 Black then it will be an altogether familiar experience. 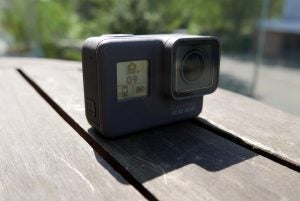 The GoPro Hero offers the same water-resistant body that allows it to reach depths of 10 metres without the need for any external housing. It also sports the same rubberised coating, which makes it robust enough to withstand being thrown around on your adventures. GoPro has very much found a blueprint for its cameras – and it’s sticking with it.

There’s also a welcome familiarity about the controls, with a single button on the side to toggle between shooting modes and a shutter button up top. The shutter button can turn the camera on and automatically begin recording, so you won’t miss a shot. A second press turns the camera off. 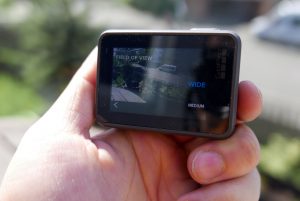 As well as the physical buttons, there’s a bright 2-inch touchscreen display on the GoPro’s rear. That’s a big plus over the previous entry-level GoPro Hero Session cameras that didn’t have a display for framing your shots. It also lets you toggle settings far easier, whilst also enabling you to view captured images and footage.

The Hero has the voice same voice controls as the Hero5 Black, enabling you to use commands such as “GoPro start recording” to grab some hands-free video, or “GoPro shoot burst”. What it lacks is the newer Wake On Voice controls of the Hero6 Black, which allow that camera to be turned on with a voice command.

Like the previous two GoPro models, I still find the voice controls a little hit and miss unless you’re reasonably close to the camera and in a quiet environment. I wouldn’t rely on them for a once-in-a-lifetime shot, for instance. 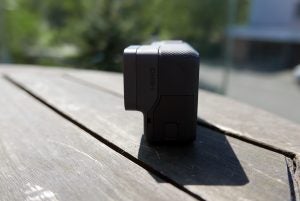 Tucked behind the side flap is the same USB-C port for charging and micro-HDMI output. Notably, the USB-C port doesn’t support GoPro’s USB-C to 3.5mm microphone adapter, so there’s no external mic support.

The Hero slots into the same mounting frame as recent models, which opens you up to a huge range of GoPro-compatible mounts and accessories.

Not surprisingly, the GoPro Hero isn’t as capable as either the Hero5 or Hero6 Black. For starters, it lacks the advanced custom GP1 processor of the recent Hero6 Black – but then that model costs twice the money. The Hero tops out at 1440p, where the other models do varying levels of 4K.

There’s a reason the Hero is being pushed as more of an everyday travel camera, rather than a camera for adrenaline junkies or athletes. It lacks the high frame-rate video of more expensive models that apply themselves to dramatic slow-motion videos.

The highest frame rate supported is 60fps, which isn’t a patch on the 240fps of the other devices. There’s no option to drop to resolutions below 1080p, which on other models open you up to those higher frame rates.

It also lacks the SuperView field-of-view setting; the taller video letting you capture more visual information at the top and bottom. The biggest omission, for a camera positioned as travel-friendly, is the lack of Linear FOV. 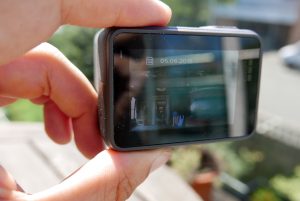 This was the big introduction with the Hero5 Black and corrected for the ultra wide-angle lens used on GoPros. GoPro lenses typically result in barrel-distorted videos and still images, meaning straight lines curve; they don’t appear straight.

It’s a look and style that was synonymous with GoPro footage in the past, but it meant that shooting more traditional images was difficult unless you were happy to correct in post.

The Hero5 Black and Hero6 Black’s Linear mode corrected for this distortion in the camera, resulting in more standard-looking videos and images – and providing the user with greater creative freedom. Your FOV options as a whole are far more limited on the Hero.

There’s also no ProTune for customising the camera’s exposure, but there is at least the same Wide Dynamic Range for still images as on the Hero5 Black. The top-end Hero6 Black includes proper High Dynamic Range, which is a step up from WDR.

The Hero’s timelapse function is also extremely limited, with only 0.5-second intervals available. The Hero5 Black and Hero6 Black support a whole range of intervals between 0.5 seconds to 60 seconds. Everyone loves grabbing a fancy timelapse while on their holiday, so this is another big miss. 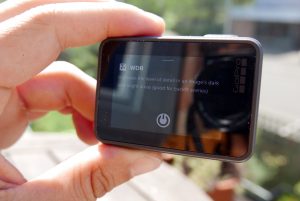 The Hero can only capture still images at 10 megapixels to the other models’ 12 megapixels. This isn’t that big a deal in the grand scheme of things.

Since the Hero isn’t necessarily a sports-orientated camera, it also lacks a GPS sensor, which in the higher-end models is used for everything from telemetric data as well as making it easier to tag a location on captured footage. Again, this being a travel camera, it’s a shame the GPS isn’t there for making it easier to instil jealousy in your Instagram friends. I imagine this would have added to the cost of the camera, however.

The camera supports Bluetooth and Wi-Fi for pairing with your smartphone and the GoPro app. The app offers a standard GoPro experience, letting you remotely control the camera as well as transfer footage. The Hero only supports 2.4GHz Wi-Fi, whereas the Hero6 Black can now do 5GHz for faster transfers. 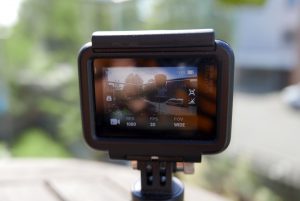 I noticed that trimming down the length of videos took much longer in the Hero, as if the camera was transferring the full-length video and the editing was done on your phone. I imagine the GP1 chip in the Hero6 Black can do this trimming in-camera, negating the need to transfer a large clip for processing on your phone. I’ve reached out to GoPro to see if this is indeed the case.

GoPro’s Quik app is also an option for automatically generating highlight videos. It’s GoPro’s attempt at making it easier to process huge archives of footage with minimal user interaction. It can indeed create some great montages, but it isn’t quite as capable when paired with the Hero as it is with the Hero6 Black’s GPS and GP1 chip, which more ably tell it what bits of footage are most compelling.

Again, perhaps coming as no surprise, the image quality isn’t a patch on that captured by the more expensive models – especially the much more expensive Hero6 Black.

The dynamic range of the latter makes it stand considerably apart, with far punchier colours and more detail. That said, the GoPro Hero is still a capable camera, just one that’s lacking a little sharpness and with more noticeable noise when under closer scrutiny.

The 10-megapixel still images can be a bit of a mixed bag, depending on light conditions in terms of how the camera decides to expose the scene. It’s a shame there isn’t the ProTune option to fine-tune the exposure to your liking.

As mentioned, the wide-angle lens makes it difficult to shoot every subject. It’s great for interior architecture shots, if you want to capture as much of the scene as possible. However, it isn’t so great for outdoor landscapes or portraits where the distortion distracts. 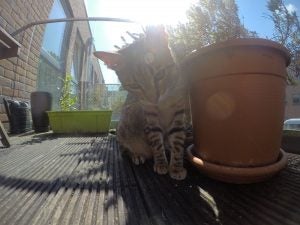 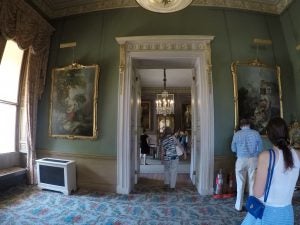 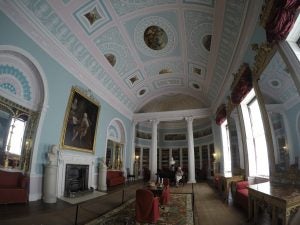 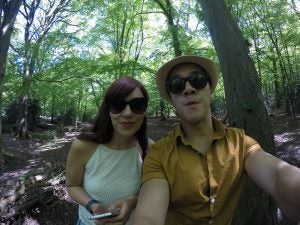 The other good thing about that shared design between current GoPro models is that they also house the same removable battery. I managed to get around two hours of life in total when shooting predominantly in 1080p/30fps. That was from lots of stop-start recording and snapping still images along the way.

It’s worth noting that transferring images to the smartphone app can be a pretty big battery drain, especially since these can take a little longer over 2.4GHz. The battery will also tend to drain while it’s in its low powered state, which lets you remotely turn it on over Bluetooth via the app.

The battery is charged over USB-C. Spare batteries are relatively inexpensive, so they’re a worthwhile investment if you plan on going out for longer shoots.

Why buy the GoPro Hero? 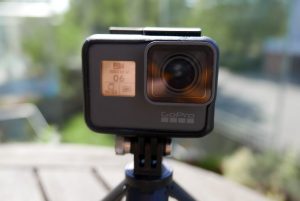 In the end, the Hero feels like a GoPro characterised by what it can’t do, rather than what it can. GoPro has taken a familiar blueprint and stripped away many of the advanced features to hit a lower price point, but it feels like a little too much is missing. It’s nowhere near as flexible as the model up, the Hero5 Black, so it’s worth stretching to that model if you can.

If you’re sticking with this price point, I’d recommend the Yi 4K Action Camera, which can be had for less money but has a wealth of video and still image modes that make it both a better travel camera and action camera.

GoPro’s entry-level model strips away a few too many features to make it compelling.