What is the Yi 4K Action Camera?

When it comes to action cameras, GoPro undeniably leads the pack. The company’s cameras are so well known that “GoPro” potentially risks becoming a generic term. However, there are plenty of alternatives out there that give GoPro’s Hero cameras a serious run for their money.

One such model is the Yi 4K Action Camera. On paper it goes toe-to-toe with GoPro’s Hero4 Black, and in some area even manages to best it. Of course, the playing field has now changed somewhat with the launch of the GoPro Hero5 Black.

Nevertheless, the Yi 4K Action Camera remains impressive on count of its selling price. This feature-packed camera can be picked up for around £250, or even less if you look at imports from the Far East. As low as £200. That seriously undercuts GoPro.

While it doesn’t quite manage to sneak up and steal GoPro’s crown, it’s still worthy of consideration if you’re looking for an action camera that’s packed with features for not so much money. 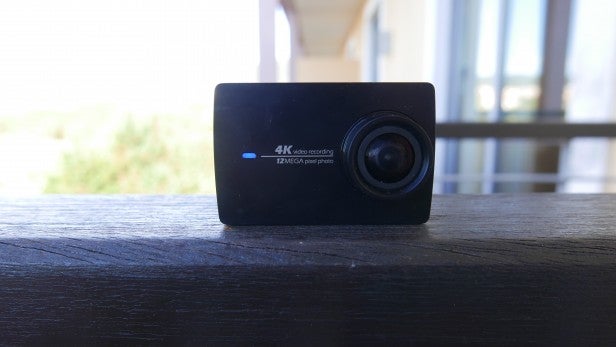 The Yi 4K Action Camera has a similar rectangular shape to GoPro’s Hero range, but is fractionally wider at 65 x 42 x 30mm. The fact that the depth, including the protruding lens, is the same as that on the Hero4 Black is impressive considering the inclusion of a 2.19-inch touchscreen LCD protected by Gorilla Glass. A touchscreen display is only available as an optional extra for GoPro’s Hero4 Black and adds to its overall size.

The display has a 640 x 360 resolution and is plenty bright and sharp enough to compose shots, as well as change settings on the camera. At its maximum brightness it’s just about viewable in extremely sunny conditions, but it can still be a bit of a struggle to see. 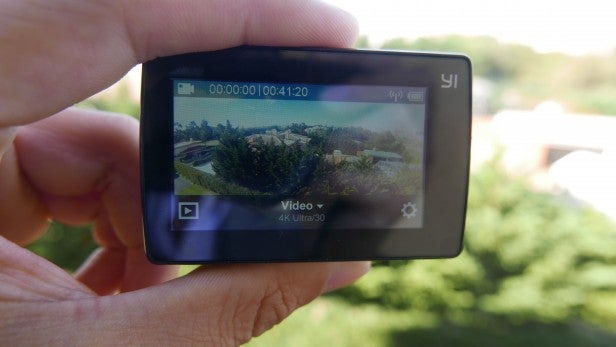 The touchscreen is a necessity since there’s only one button on the Yi 4K Action Camera. While GoPro’s designs feature three buttons to change settings and toggle between modes, you’ll rely only on the touchscreen here to do anything beyond turning the camera on and off or capturing video and still images.

This becomes a problem if you opt to use the Yi 4K Action Camera inside a waterproof case. Not that a waterproof case is even included as standard. It’s the first of a few omissions that chip away at the value-for-money proposition of the camera. Still, a case is a relatively inexpensive addition: there are a number of third-party options available or you can get one from Yi itself for about £20.

But returning to the waterproof case conundrum. With only a solitary button available, you’ll need to open up the case to access the touchscreen to make any adjustments – which, for obvious reasons, isn’t always a good idea nor always possible.

There is an Underwater mode that lets you swap between still image or video modes by holding down the button, an action that normally turns the camera off. But with this mode engaged, there’s now no way to turn the camera off without opening the case. 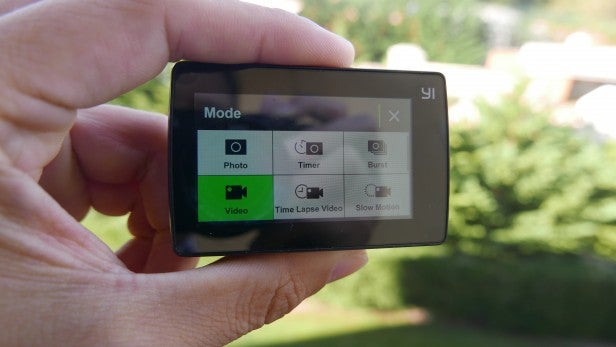 Besides, you’ll still need to open the case to access the other modes, such as timelapse or timer modes. I took the Yi 4K Action Camera swimming and snorkelling while on holiday, and having to change settings proved irritating and resulted in some water ending up inside the case; plus, there was plenty of juggling the camera outside of the water.

There are no mounts, either; you literally only get the camera in the box. As a bare minimum, pretty much every action camera I’ve ever tested also included adhesive mounts; there’s nothing here.

The Yi 4K Action Camera has a standard quarter-inch tripod thread on its underside, so you don’t have to use proprietary mounts if you don’t want to. I ended up picking up a tripod-to-GoPro adapter for around £4, in order to be able to use my own existing mounts and accessories. 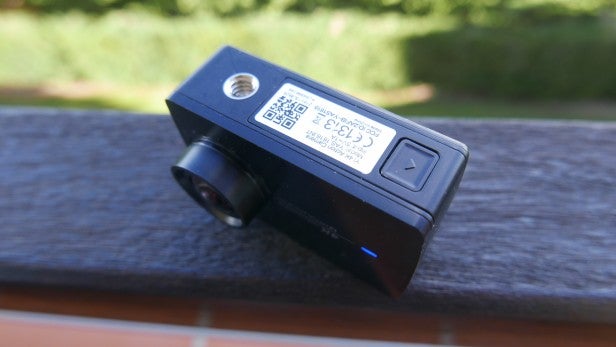 The lack of included accessories is a frustration, so factor this in if you decide to pick up one of these cameras immediately before a trip; otherwise, you’re going to be left hand-holding the camera at every turn.

A small speaker on the top of the camera allows you to set the device to beep at various volumes in order to indicate that the camera is recording or capturing an image. Even at maximum volume, however, it can be very difficult to hear if it’s inside a case. There’s a multi-coloured LED on the front as well as integrated into the top button, but these can be a little tricky to spot in bright light. As a result, there’s still occasional uncertainty as to whether the camera is recording.

There’s just a micro-USB port tucked away behind a flap on the side used to charge the battery. There’s no way to output to a display, nor to connect an external microphone – both functions available on a Hero4 Black. The latter is an important omission for anyone wanting better-sounding audio from their recordings. A microSD slot is used for storage.

The camera also supports dual-band Wi-Fi and Bluetooth for an optional remote control. The Wi-Fi pairing with the Yi Action app was actually the most reliable I’ve experienced with any action camera I’ve tested to date. The camera and app paired flawlessly and swiftly every time, and I didn’t encounter any problems transferring images and videos to a smartphone. 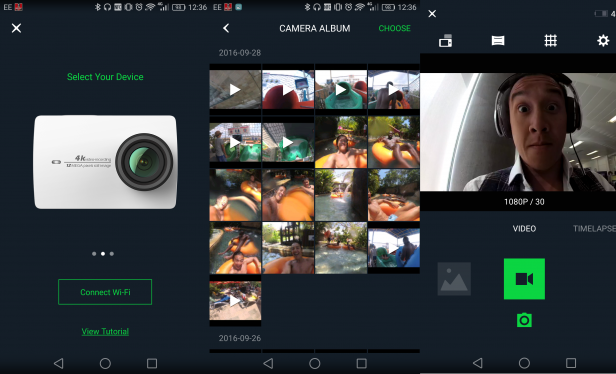 There is some basic video and photo-editing capabilities, but annoyingly, this adds watermarks to the end result. There’s also a social media side to the app that apes Instagram, but it wasn’t something I felt the need to use, instead choosing to export to actual Instagram.

The app can also be used as a live view, and there’s minimal delay between what you see on-screen and what’s being captured by the sensor. You can also use the app to change settings remotely.

Some early reviews mentioned sights of some peculiar English or leftover Chinese in the app, but the version of the app I tested seemed to have corrected such issues. The app is completely frustration-free and turned out to be one of the Yi 4K Action Cam’s strongest features.

Next
Video and audio quality, battery life and verdict Review