Editor’s note: The GoPro Hero 6 Black has now been discontinued and replaced by the GoPro Hero 7 Black. GoPro did tell us there might “still be some retail inventory of previous cameras”, so it’s possible you’ll be still able to find the GoPro Hero 6 Black on offer, if it’s the model you want. Read our GoPro camera range guide (for all models, new and old) to help you decide.

What is the GoPro Hero 6 Black?

Last year’s GoPro Hero 5 Black was somewhat of a sea change for GoPro’s Hero range, and a camera I called GoPro’s “greatest hits”. The Hero 6 Black, however, is very much an evolution of a now established winning formula. It improves in many key areas, including in its top-end resolution and frame rates, as well as offering significantly better image stabilisation and upgrades in overall image quality.

UPDATE: GoPro has reduced the price of the Hero 6 Black from its original $499/£499. You can now bag one for $399/£399 making it a much better prospect. For the money, it’s by far the best action camera available and the new lower price removes one of the biggest negatives around GoPro’s flagship camera when we originally reviewed it at its higher price.

In terms of physical design, nothing has changed. The camera body is identical to the Hero 5 Black. So much so, in fact, that if you own the older camera then I’d recommend marking up the newer model to tell them apart. The obvious benefit to this consistency in design is that all of the Hero 5 Black-specific mounts and accessories – such as the Karma drone and Karma Grip – are compatible with the Hero 6 Black.

I won’t go into too much detail here since so little has changed; read the Hero 5 Black review for more details. There’s still a 2-inch touchscreen on the back, but it wasn’t until I put the two models next to one another that I noticed the quality of the display has improved. Colours on the Hero 6 Black’s display are far punchier compared to the washed-out look of the older model. This isn’t a huge deal for a device that you’ll predominantly be using to quickly frame shots, but it’s welcome nevertheless. 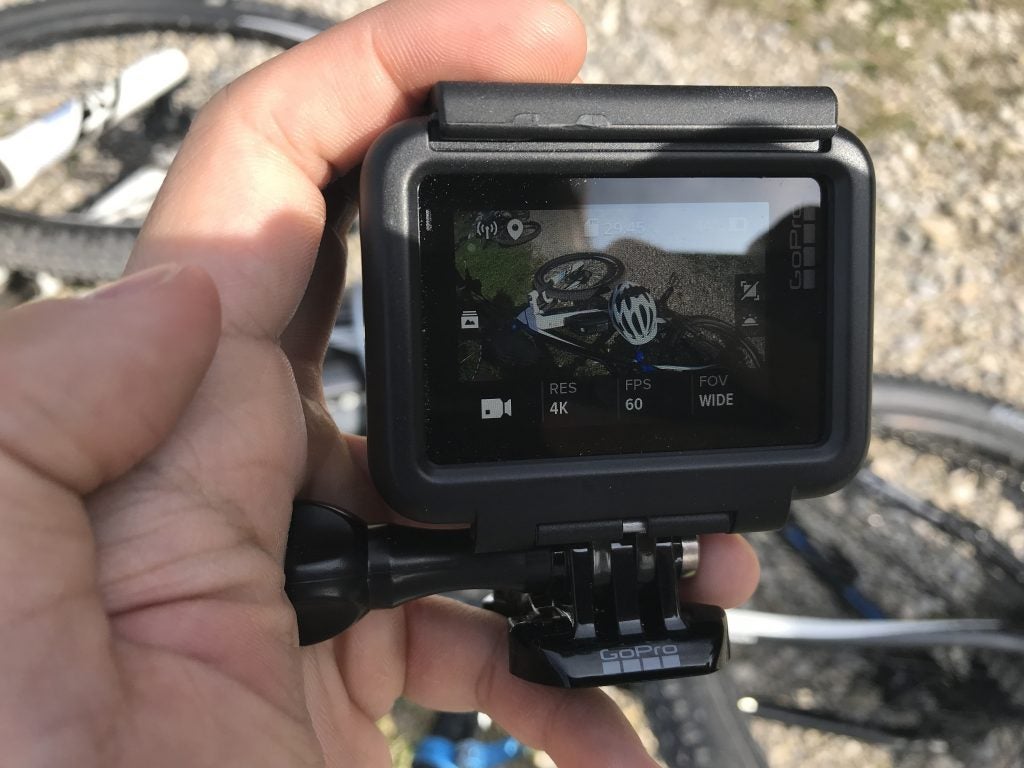 The touch-responsiveness also appears to have been improved. In the past, the Hero 5 Black would on occasion fail to register some of the swipe gestures to access menus, but the Hero 6 Black is swifter to respond. Voice controls also make a return, meaning you can say ‘GoPro start recording’ and the device will begin accordingly.

New is the wake-on-voice function. Now, when turned off with your voice, the GoPro will move into a low-power listening mode for eight hours that will enable you to turn on the device and begin recording with a voice command. 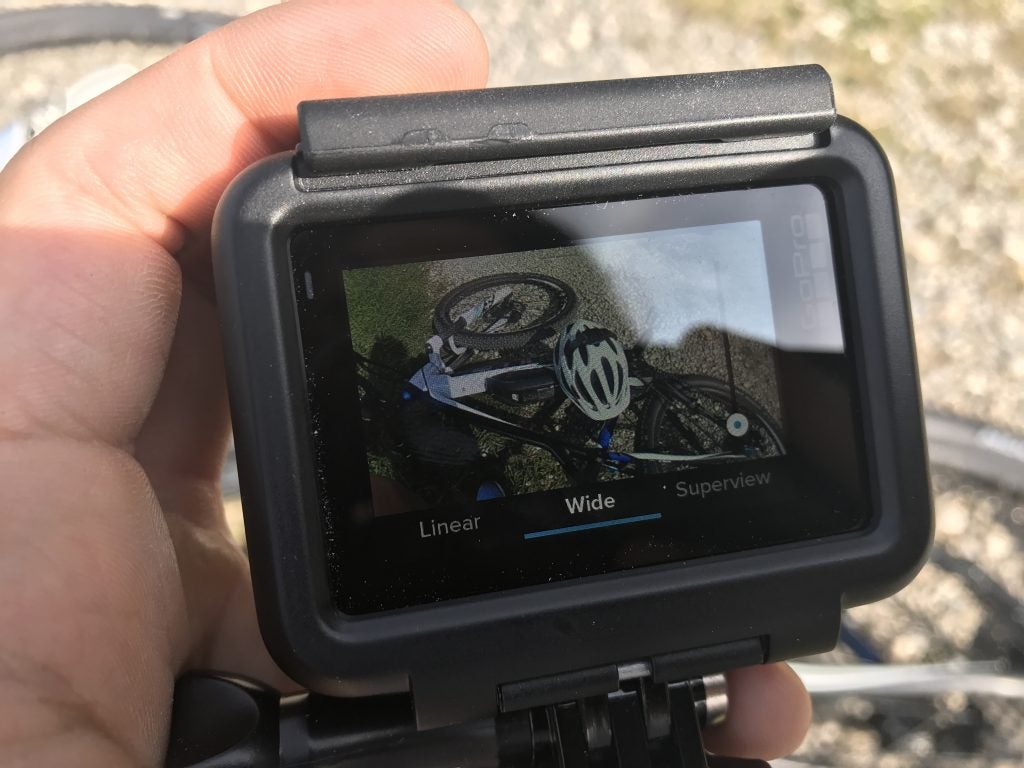 When it works, it’s great. However, the issue is that the GoPro can still struggle to pick up your voice in noisier surroundings – when it’s windy outdoors, for instance. There are optional accessories such as GoPro’s wearable Remo remote that feature a microphone that will help in this type of scenario, but I was hoping the camera’s mics might have seen an improvement. You can still quickly begin recording a video from off just by hitting the shutter button on top of the camera; a second press will power it back down. It’s super-convenient.

The Hero 6 Black remains waterproof to 10 metres without the need for any external housing, which is a welcome feature. If you want to go to greater depths, a separate housing is available for scuba fans. In the box you get the usual adhesive mounts to get started. One of GoPro’s strengths in general is its mounts and accessories. Think of somewhere you might want to attach this camera and GoPro or third-parties will likely already have a suitable option. 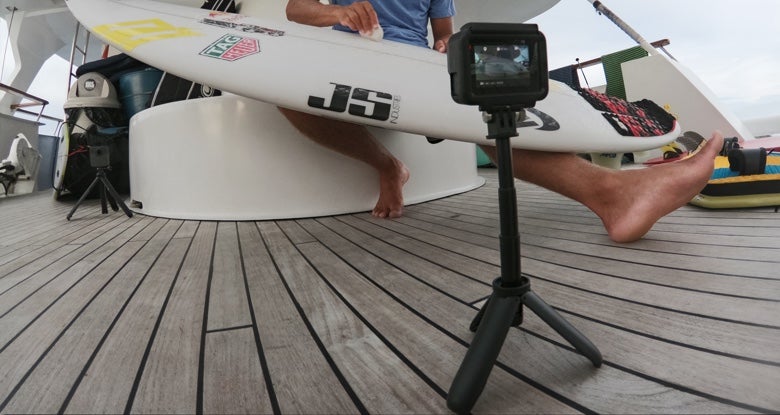 GoPro has launched a few new mounts alongside the Hero 6 Black. I was supplied with the one known as The Shorty. It’s a cute little telescopic handgrip that extends in length by 20cm. It also opens out into a miniature tripod; it’s quickly become my go-to mount.

A significant change over other GoPro mounts is that the thumbscrew used to secure your GoPro is now a shortened aluminium screw. This makes it perfect for travellers since the shortened screw is unlikely to become caught in your bag or pockets when you quickly want to grab a video or photo. I’m hoping GoPro makes these new screws available separately, as I much prefer them to the longer, plastic options that make the camera trickier to stow away.

The big star of the show is GoPro’s custom-designed GP1 processor. This allows the Hero 6 Black to capture far higher resolution and frame rate combinations compared to last year’s model. It pretty much offers double the performance of the Hero 5 Black.

Where last year’s GoPro topped out at 4K/30fps, the Hero 6 Black can do 4K/60fps. Similarly, the limit was 1080p/120fps slow-motion, but you can now do a super-smooth 1080p/240fps. There’s even 2.7K and 120fps if you don’t want to sacrifice quite so much resolution in exchange for slow-motion dramatics. It was important for GoPro to custom design it own chips to differentiate its cameras from the number of new rivals that now offer similar shooting capabilities. The Yi 4K+ Action Cam I reviewed managed to beat GoPro to the 4K/60fps punch, using an Ambarella chip that featured in previous GoPro cameras. But the GP1 offers much, much more.

It also provides the grunt for some video analysis, which plugs into GoPro’s automatic content-generation QuikStories. The GP1 is able to analyse sensor information from the built-in GPS, accelerometer, gyroscope and microphones. Then, through machine learning, it uses this to help the Quik app create a compelling edit with little to no user input.

By using all this captured data, alongside algorithms for face recognition and even identifying the sound of applause and cheering crowds, the app can more easily determine the important parts of your clip worth highlighting.

Imagine hitting a backflip on your snowboard while hurtling down a mountain at 100mph, all the while the crowd is going crazy, and you can imagine what will end up in your edit. It’s clever stuff and removes one of the greatest pain points of recording any kind of footage – knowing what to do with it in the end. I’m as guilty as anyone of capturing lots of content and then failing to ever edit it into anything compelling. 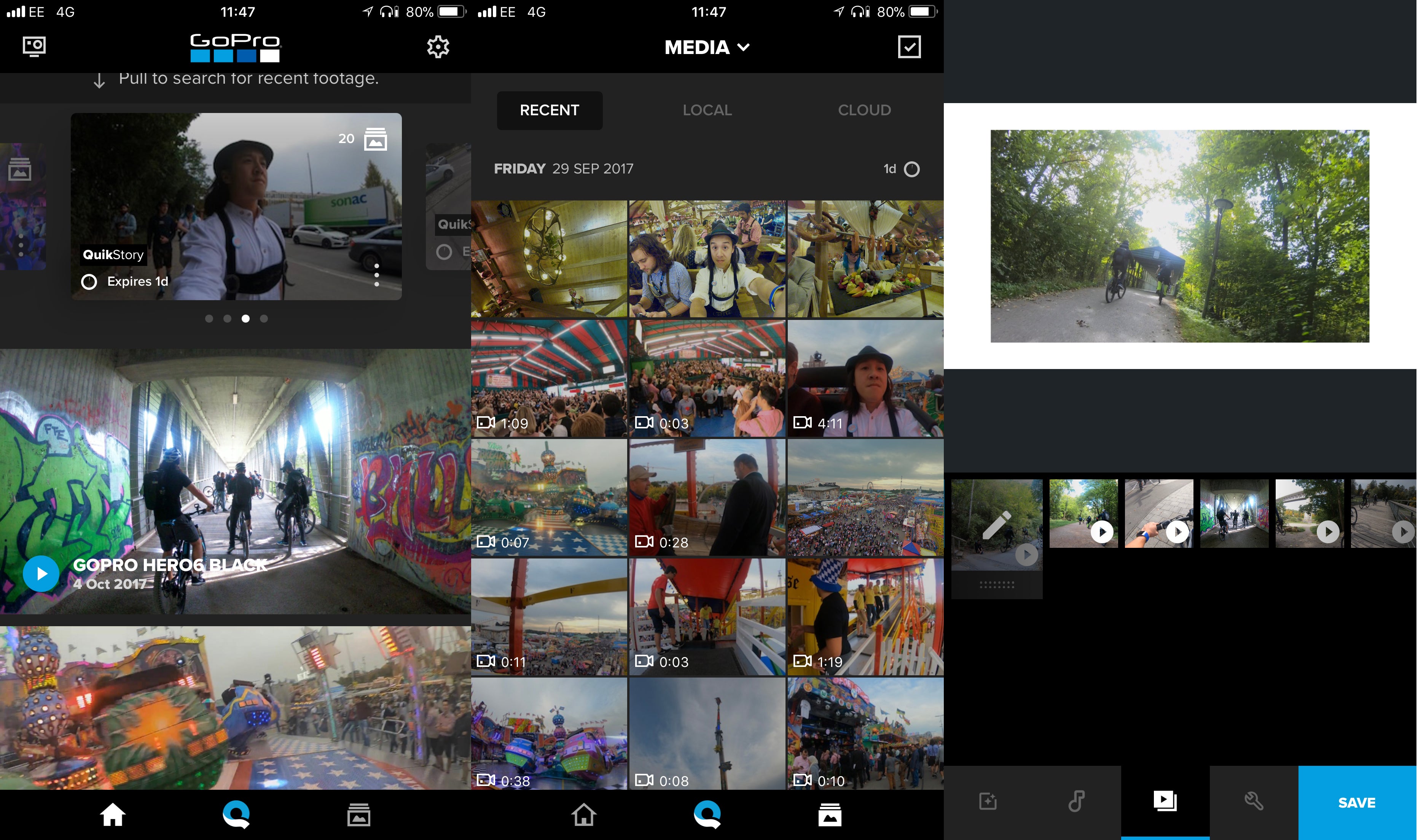 Now the GoPro app can detect when there’s new footage on your GoPro and then download it to the camera to be automatically edited together into a highlights reel.

Wi-Fi performance has also seen a performance boost. It now allows for faster 5GHz connections, which translates to 3x faster file transfers when using the companion GoPro smartphone app to transfer footage. It can still take a while to transfer content, especially if it’s of the 4K variety.

For whatever reason, using the automatic footage transfer function of the GoPro app wouldn’t always works, even if you sit through the slow progress bar. It’ll throw up an error message at the end with no reason. Jumping into the camera’s gallery menu and manually selecting footage seems to get round the problem rather strangely.

That 5GHz Wi-Fi connection is also a serious drain on the battery, so I recommend transferring content when the device is plugged in; not while you’re out on an important shoot. I also found that the Hero 6 Black became super hot at times. Bluetooth remains a low-power way for the GoPro to communicate with your paired phone and be remotely powered on.

The app still provides a handy live view of the sensor for remotely controlling the camera or framing your shots when the camera is out of reach. There isn’t much lag and the experience has become more seamless over the past year. It’s still a little annoying to have to install the Quik app separately from the GoPro app for content creation, though.