The keyboard (fully backlit, should you wish to type in low light conditions – and in a nice touch the laptop will detect when the lights should come on) is full-sized, though lacking a number pad. The F-keys along the top are almost the same size as the letter keys, and control the functions such as brightness, volume and bluetooth as you would expect. 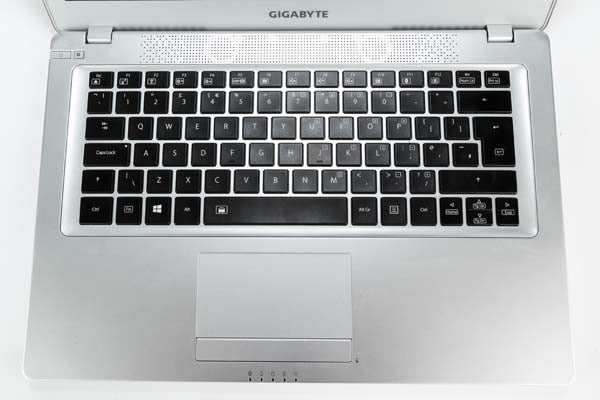 It’s hard to find fault with the keys themselves, and typing quickly on the U2442V is very straightforward. They’re also very soft to the touch, and even by hitting the keys hard, it’s difficult to make much noise off of them. The space bar is a decent size (take note Toshiba), and there’s not much we’d change about it. If we’re being super picky, we’d take issue with the arrow keys, where the ‘left’ and ‘right’ buttons take up the same space each as ‘up’ and ‘down’ combined, but it’s not like those keys are used too much anyway.

But the touchpad on the U2442V is an odd beast, with small dots etched into it, and a single long button below it that can be clicked on the left or right hand side to replicate the buttons on a mouse. Gigabyte claims this dotted texture is to “enhance the sensitivity, responsiveness and accuracy without compromising design and functionality”, though we wouldn’t be that kind. 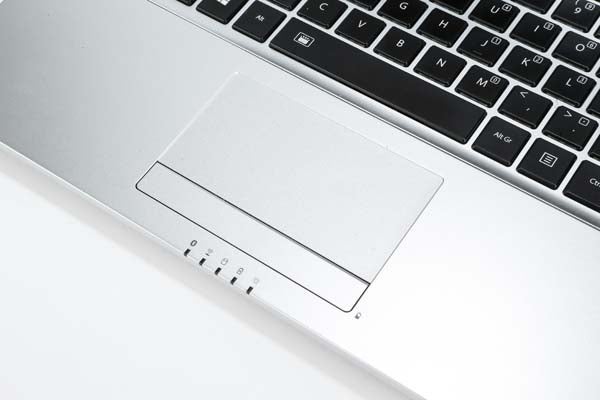 We found the dots a bit distracting, and accuracy a bit hit and miss. It’s perhaps a little too sensitive, as a number of times during the
review we found our pointer mysteriously dragged up the page, as we began writing in the middle of a sentence we’d already finished halfway up the page. We think this is because the trackpad also allows you to click with a tap of the touchpad, rather than just the buttons below it. Lightly brushing the touchpad with the palm of your hand while typing can be interpreted as a tap: a bit annoying.

Gestures initially failed to work, but a quick driver update meant that when they did start working, things were pretty effective. It’s a generously sized touchpad, and as such gestures like scrolling and resizing are consistent to pull off with very few mistakes.

By default the U2442V comes with a 128GB SSD, but if that doesn’t sound like enough space, you can get a model with a 750GB hard disk alongside it. This bumps the weight up from.1.59kg to 1.69kg and adds a little onto the price, of course. 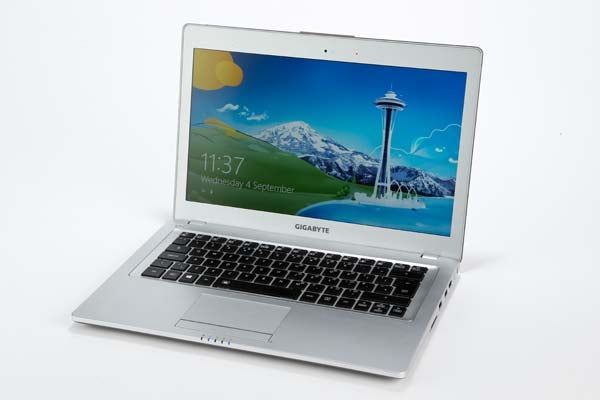 The Gigabyte U2442V is an impressive performer all round with good specifications providing zippy performance and the all important gaming credentials usually missing in the Ultrabook market. It’s not perfect though: the screen could be better, the trackpad is sometimes a little too sensitive, and the battery life at three and a half hours isn’t anywhere near where it needs to be.

But that doesn’t mean you should rule it out. While the Samsung Series 7 Ultra is better overall, particularly in its design, screen and battery life, the U2442V is the faster laptop in our tests, and should allow you to add little more eye-candy to your games. On balance we’d still recommend the Samsung before it, but if you’re more concerned with performance then the Gigabyte is worth considering.

Great performance and value are the Gigabyte U2442V’s trump cards. It has a few rough edges that mean it’s not an outright recommendation, but for the right person this is good option.