What is the Samsung Series 7 Ultra NP740U3E?

The Samsung Series 7 Touchscreen Ultra (or NP740U3E to give it its less catchy title) is, if you’ll permit an Apple comparison, somewhere between a 13-inch MacBook Air and a MacBook Pro. For around £1,000, you get many of the same benefits of Apple’s svelte laptop: it’s highly portable at only 23.5mm thick and 1.65kg in weight, and packs plenty of power within its tiny frame.

On top of that, it also offers a couple of things Apple doesn’t: Windows 8 and a touch-screen interface and dedicated graphics. It’s the kind of laptop that, on paper, could be everything you need in one – i.e. a portable laptop that’s powerful enough to play games as well.

As you’d expect from a high-end ultrabook, the design of the Series 7 is stylish, compact and very thin. At just 18.9mm thick and weighing in at 1.65kg, it certainly lives up to its portable credentials. That does make it slightly heavier and thicker than the 13-inch MacBook Air, which weighs in at 1.35kg and stands 17.3mm thick, but that’s really more of a difference for bragging rights than actual practicality.

Samsung describes the colour as ‘bare metal’, and it keeps this colour scheme for everything (including the keys and touchpad), aside from stylish glossy black border of the screen. The metal is smooth to the touch, and has nicely rounded edges: it’s a laptop that certainly looks like it deserves its price tag.

There are a generous three USB ports, a headphone jack, SD card slot, a VGA adapter, an HDMI port, an Ethernet port and, of course, the very small AC adapter point. The base of the laptop is so thin that the USB slots only just fit, and the Ethernet port actually doesn’t, requiring a pull-down tab to make space for the cable.

What it doesn’t find room for, of course, is any optical media. There’s no DVD or Blu-ray drive included, so if that’s important to you, then you’ll have to break the minimalist effect with an external USB drive, or look elsewhere. 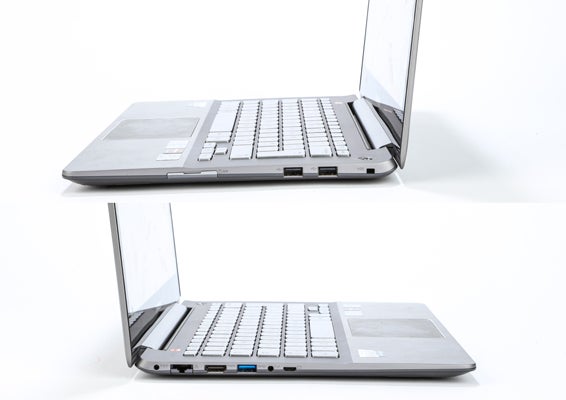 Samsung knows how to make a quality screen, and it shows. Like the Samsung Galaxy S4, the screen’s colours seem a little oversaturated at times, but it’s all down to personal taste.

Other than that, we have nothing but praise for the screen. It’s incredibly sharp, as you’d expect from a 1,920 x 1,080 resolution on a 13.3-inch display, with both text and images appearing crystal clear. Its peak brightness is impressively high, which should help when used outdoors. The viewing angle, meanwhile, is wide enough that you can read text from unrealistically tight angle without trouble.

The screen is touch friendly, and while this is great for navigating the Windows 8 start menu, the usual caveats apply about the fiddly nature of applying an exact touch to desktop mode, especially as the high resolution mean menu items are very small.

The only slight downside here is that the screen feels a little flimsy when it’s supposed to be locked into position. It doesn’t slip down without contact, but it often wobbles when you’re using the touchscreen, which is annoying.

Used as our main laptop for the review period
Tested for at least a week
Used consistent benchmarks for fair comparisons with other laptops
Reviewed using respected industry benchmarks and real world use
Next
Performance, Heat & Noise, Battery Life Review