Ultrabooks tend to put light aesthetics ahead of all else, and that usually includes gaming performance. Gigabyte is a big name in laptops (it’s better known for desktop components), but it has thrown its hat into the ring with the U2442V, which rivals the Samsung Series 7 Ultra in discarding the standard on-board graphics for a dedicated chip. In this case, the GeForce GT640M. It backs all that up with a an i7 processor, 8GB RAM and a SSD drive (with optional additional SATA drive for added space, not in the review model) all packed into its 1.59kg frame. Can it be the go-to laptop for gamers on the go? 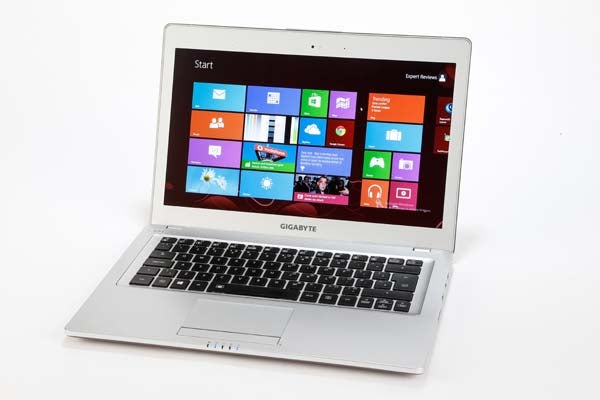 At 1.6kg in weight, it’s not the lightest Ultrabook we’ve seen (the Samsung Series 9 takes that trophy at 1.13kg), and it actually looks quite chunky, but that’s more down to the slightly angular design than an actual thickness. It doesn’t have the thin tapering of the Macbook Air, maintaining the same thickness all the way around – 21mm thick at its thickest point, compared to the Air’s 17mm. It feels suitably solid and like it could take a few knocks along the way.

Like most Ultrabooks, it has a premium finish, albeit only on the outside where it’s brushed aluminum. It’s plastic on the inside, though it looks and feels just fine. It’s entirely minimalist with just two Gigabyte logos – one on the top and one underneath the screen. There aren’t even any Nvidia, Windows or Intel decals and the look is pretty stylish, even if it lacks the ultimate polish of larger brands. The only breaks in this are the speaker area above the keyboard, the power button and a series of light indicators underneath the touchpad.

As you’d imagine, there’s no optical media drive, but the space is taken up with a decent amount of connectivity ports: four USB slots, an HDMI port, a VGA port, a headphone jack, microphone jack, ethernet port, card reader and a Kensington lock. 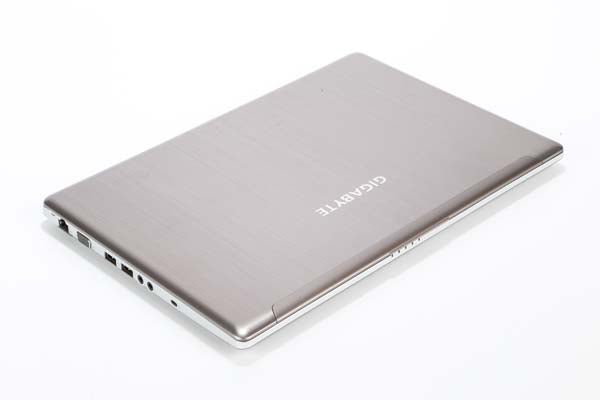 Somewhat unusually for a (non Apple, anyway) laptop nowadays, the U2442V’s screen isn’t touch enabled. To be honest, we barely use touch in our day-to-day usage of Windows 8 laptops anyway, but it does make bringing up the settings bar to the right of the screen a bit more fiddly.

In theory, this could mean that the screen is sharper – quite often we see a strange meshy interlaced overlay on the screen. Bizarrely, it’s here too, without the excuse of having to cater for touch. The result here is that the icons are a bit fuzzy, and not as sharp as you’d expect from the 1,600 x 900 resolution, and there seems to be a little flickering going on from time to time that can be distracting. 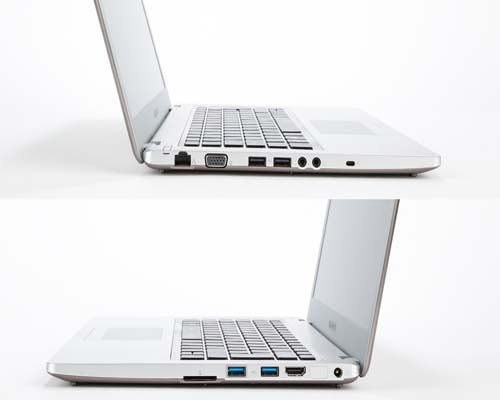 Screen brightness isn’t bad though, topping out at a typical 250 nits. Colours seem accurate enough to the untrained eye, though at 7,198K the colour temperature is much cooler than the ideal D65 standard. The real weakness is contrast, where the Gigabyte measures just 279:1. This means blacks lack real depth and richness, which is bad news for video viewing.

Viewing angles are so-so as there’s a noticeable contrast shift from the sides, but nothing dramatic enough to worry about. Moreover, the matte, non-glare finish is a very welcome, practical touch that’s all too rare these days.

Colour accuracy is average but no dreadful, measuring an average DeltaE of 3.21 (lower is better): good enough for normal use.

Overall, it’s an adequate screen. Clearly Gigabyte has saved a little money here in favour of higher hardware specs, but not so much to cause alarm.