Considering Gigabyte makes some jolly impressive gaming keyboards, such as the Gigabyte Aivia Osmium, we were hoping for a decent experience here – and mostly, the U2442N delivers.

Layout is great, with well-spaced, nicely shaped keys that fall naturally under the fingers. It’s an especially nice touch that the secondary function of the space bar is to turn on the keyboard’s white LED backlighting, though there’s also a light sensor if you prefer to set it automatically. Feedback too is good, with plenty of travel and a defined click. 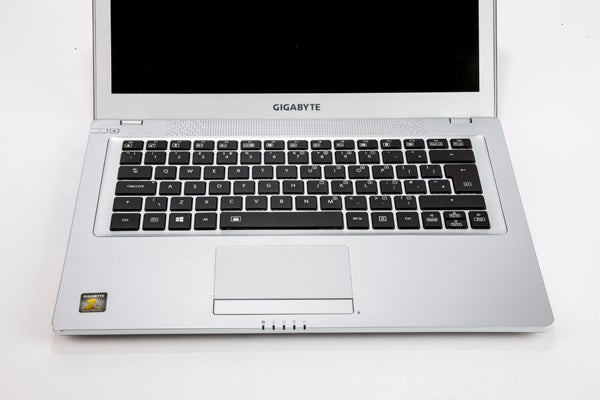 So what stops the Gigabyte U2442N’s typing experience from being a runaway success? Well, there’s a bit of flex towards the keyboard’s centre and, more annoyingly, the keys feel and sound loose, making a bit of a racket when tapping away at speed. If you can live with this though, the U2442N’s keyboard is far better than shallower efforts like that found on the Sony VAIO T13.

Unlike on many premium Ultrabooks, the U2442N’s touchpad is not glass but textured plastic, and with distinct buttons (which are actually preferable on a gaming machine). Mind you, it’s still pleasant enough to run your finger along, but neither feel nor use match up to the best of the rest, and our review sample was also a little temperamental when it came to multi-touch gestures. 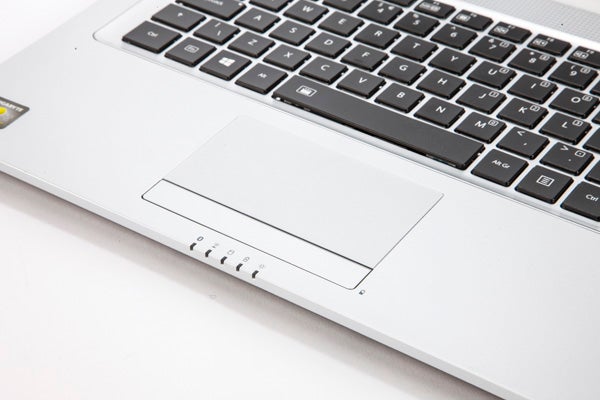 Its buttons, integrated into a single bar, offer a positive click but also suffer from a large central dead zone. Overall then, the Gigabyte U2442N’s touchpad is usable but not up to the best of the rest. 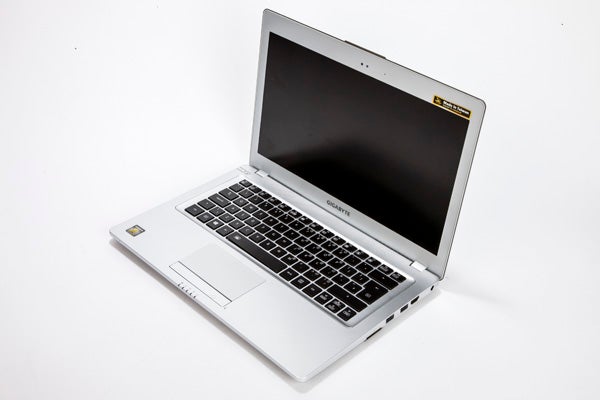 The upwards-facing stereo speakers are integrated along the top of the keyboard, where a perforation pattern does a decent job of hiding them. As far as audio quality goes, they’re fairly average though. There’s a decent level of volume and treble detail, but they lack body and bass. Daytime TV and YouTube vids should be fine, but for proper gaming and movie entertainment we would strongly recommend an external solution.

The U2442N’s matt 14-inch screen offers a rather nice 1,600 x 900 resolution, but unfortunately it also uses a TN panel rather than high-quality IPS/PLS or PVA. Mind you, it definitely has its strong points, such as excellent dark detailing, even backlighting, decent colours, and reasonable horizontal viewing angles along with a lack of any obvious artefacts.

However, it’s all let down by terrible vertical viewing angles, which mean you have to tilt the screen just right if you don’t want it to suffer severe contrast shift. It’s also difficult to find a sweet spot where everything doesn’t look a bit washed out. In this regard, many TN laptop screens perform slightly better. While we’re on the niggle list we also noticed a dead pixel, but that’s just as likely to be limited to this sample. 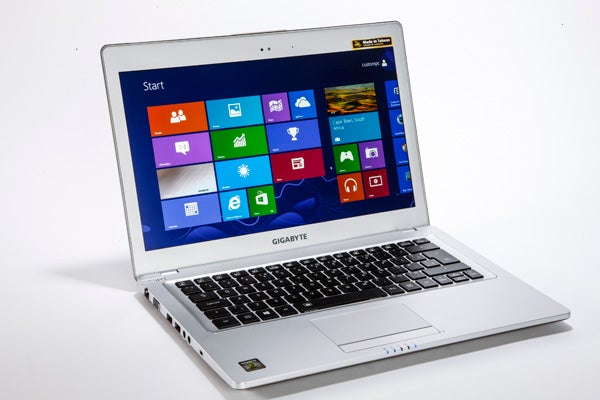 To be fair, the Gigabyte U2442N is hardly alone on the list of high-end, high-resolution laptops with poor display tech, and considering you’re getting a lot of hardware for your money, some buyers might be willing to forgive it.

This would have been easier, though, if Gigabyte had at least thrown in touch to make the most of Windows 8 and some of the Windows Store’s casual games. The company did make a handy modification to Windows 8’s desktop view (if you’re going for that rather than the cheaper Windows 7 model), giving you a dedicated ‘power’ button in the task bar where you can quickly put your laptop to sleep, restart it, hibernate it or shut it down.

Used as our main laptop for the review period
Tested for at least a week
Used consistent benchmarks for fair comparisons with other laptops
Reviewed using respected industry benchmarks and real world use
Previous
Gigabyte U2442N Review Next
Performance, Value and Verdict Review