While you may associate Gigabyte with motherboards, especially here in the UK, the company also does an interesting selection of laptops and peripherals. One of those is the Gigabyte Aivia Osmium gaming keyboard, a premium tool with standout features like Cherry MX Red key switches – pretty much the best mechanical key switches you can get, but more on that later – individual key backlighting, and a world-first integrated USB 3.0 throughput. It’s good-looking and built like a brick, but is it the gaming keyboard to get? 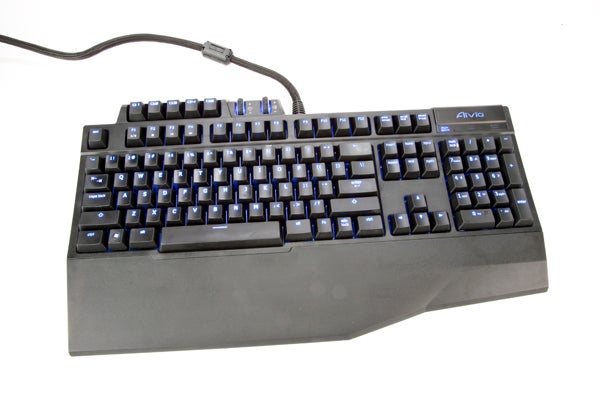 Design and Build
There’s no denying that the Aivia Osmium looks the part. It sports a relatively compact design with stealthy, sleek lines. Thankfully, the Osmium does away with its predecessor’s rather clunky design, which incorporated the wrist-rest into the keyboard, making for a massive, solid slab. The wrist-rest is now detachable, though it fits very precisely when attached.

The keyboard body is finished in a very lightly textured hard black plastic, while the keys sport a softer finish that’s nice on the fingers. Build quality is superb throughout, with the keyboard itself offering a brick-like solidity and the palm-rest not far behind. Thanks to their mechanical key switches, key presses also exude the kind of quality associated with the IBM keyboards of yore. 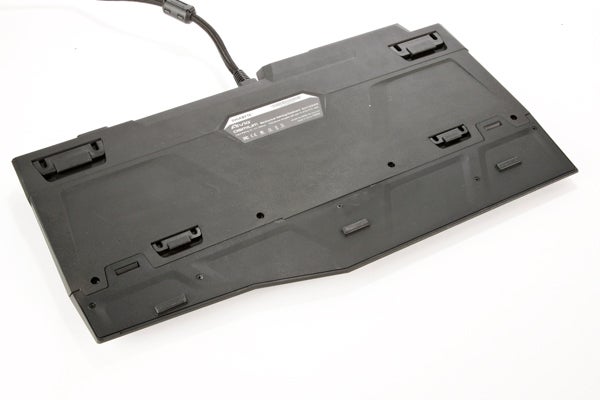 Backlighting comes in one colour only, but thankfully that colour is blue, which goes brilliantly with its matt black exterior. Only the large Aivia button at the top left changes colour to indicate profile selection, which is an elegant solution. 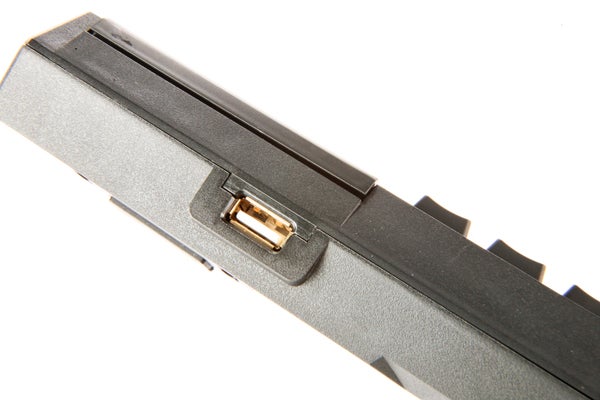 Cable and Connectivity
Even the Gigabyte Aivia Osmium’s data cable feels like it has been reinforced, no doubt due to its extraordinary thickness and rather lovely braided finish. The reason it’s so thick is because it actually contains USB 2.0, USB 3.0 and audio cables, all of which terminate in separate cables with a generous amount of leeway in the unlikely case your PC does not have these ports located closely together. Speaking of distance, at two meters overall, the cable should be long enough for any arrangement. 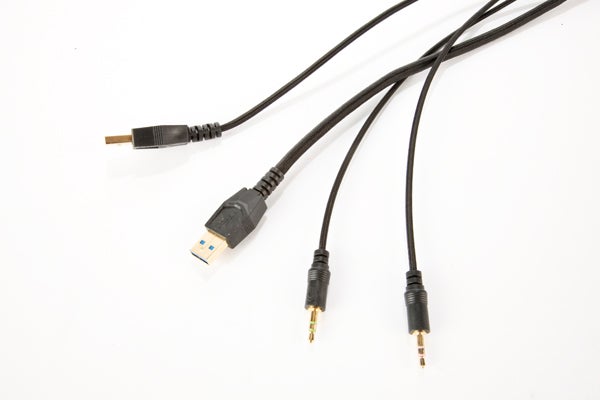 On the keyboard, this gives you gold-plated headphone and microphone jacks on the left, along with a USB 3.0 input, while the USB 2.0 input is found at the top under the Aivia button. So you could, for example plug your mouse into the top port and save the speedier USB 3.0 one for fast memory sticks. While hardly essential, these features will be very convenient for many. 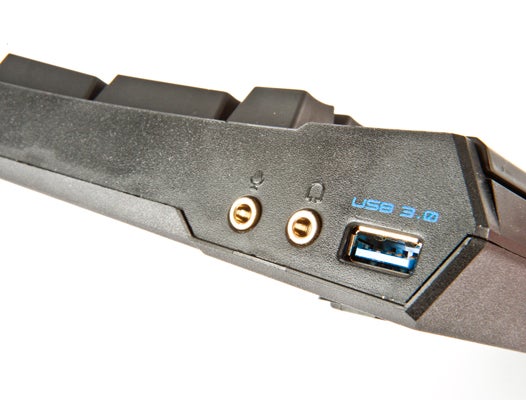 Backlighting
Some gaming keyboards, like the Logitech G19, let you change their backlighting between every colour of the rainbow. With the Aivia Osmium, all you get is blue.

Mind you, that’s not a bad thing as long as your other bits match it, and the implementation of this LED backlighting is far more impressive than on most keyboards. 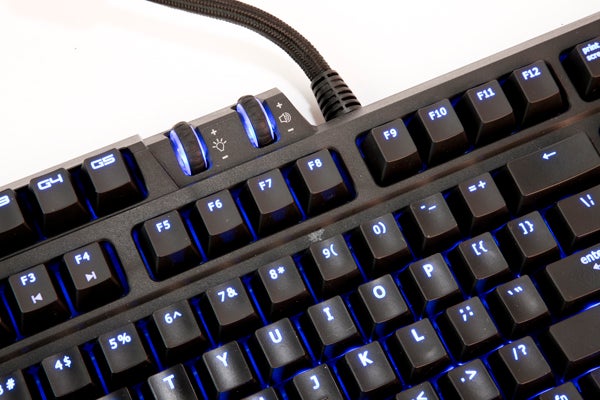 Not only can you adjust the intensity or even turn backlighting off altogether using a rubberised analogue scroll wheel near the G keys at the keyboard’s top, but each and every key has an individual LED underneath, meaning that this keyboard goes bright! In fact, Gigabyte’s Aivia Osmium is one of the few keyboards whose backlighting you can spot clearly from a distance even in a bright, sunny room.

Media Controls and Gaming Keys
Naturally, the Osmium sports the usual multimedia controls. A nice analogue volume wheel joins the backlighting control one at the keyboard’s top, while playback controls can be found as secondary functions on the F1-F4 keys, activated by an Fn key beside right Alt. 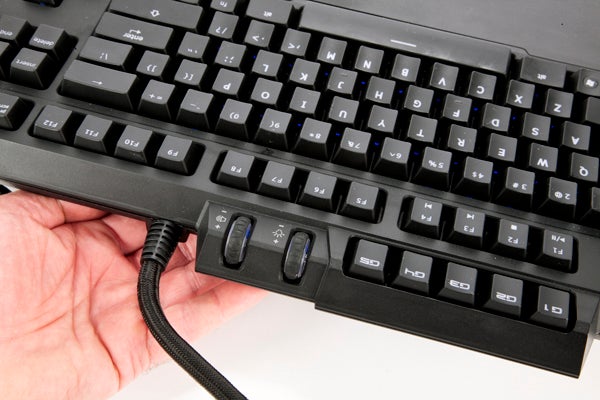 Like any gaming keyboard worth its salt, the Gigabyte Aivia Osmium offers a set of dedicated macro-programmable gaming keys. Together with the analogue wheels these, marked G1-G5, are tucked in a protruding section at the keyboard’s top. Whether this location makes more sense than to the left side as on many gaming keyboards is debatable, but we guess it’s a matter of preference.

The Osmium offers five profiles that can be stored in its in-built memory and configured to your liking using the somewhat basic software. As mentioned, profiles can be changed using the Aivia button which also houses the Num Lock, Caps Lock and Scroll Lock indicators. 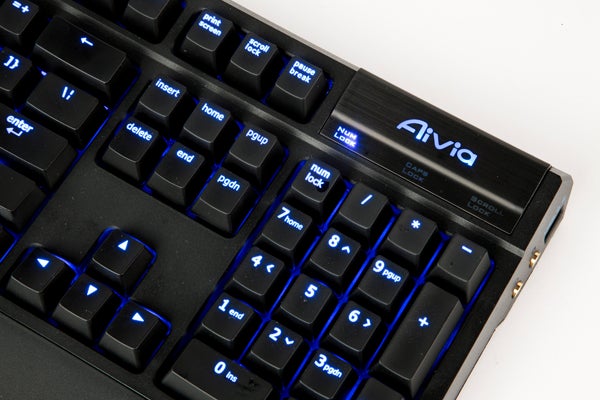 Having this button be so huge is a great feature as it means you can press it in the middle of a heated battle without looking away from your screen. Its gently pulsing LED will change colour to let you know which profile you’re on, between blue, green, red, pink and aqua. Our only niggle is that green and aqua can look a little alike. 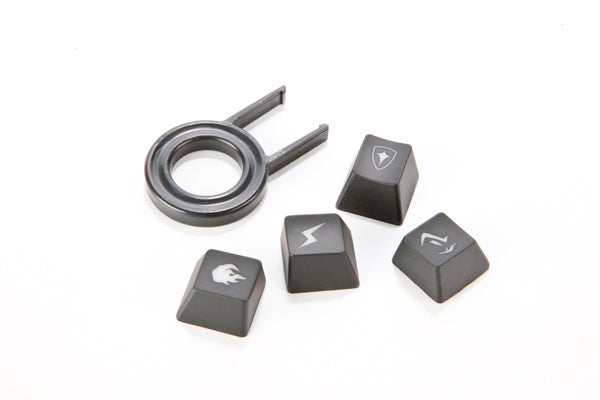 Another nice gaming touch on the Osmium are five keycaps with custom decals like a firebolt, lightning bolt, shield and puma-like face. A key removal tool is included so you can interchange these with any of the regularly shaped keys, especially handy when you have a million shortcuts to remember.

Ergonomics, Typing and Performance
Ergonomically, this keyboard is quite comfy. The finish on the palm-rest is pleasant to rest your hands on and doesn’t get slippery when the palms get sweaty. The soft finish on keys means they very nice to rest your fingers on, though the mechanical key switches are so sensitive that even the lightest pressure may result in a key stroke. 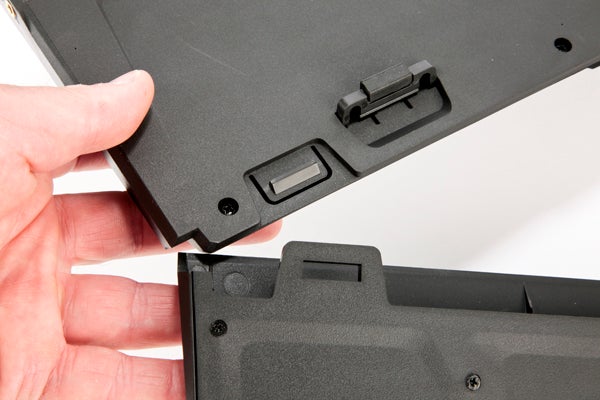 You can adjust the keyboard’s angle with both front and rear feet. But actually, even with the front feet up, angle is our one complaint regarding the Omnium’s comfort. The keyboard itself slopes up quite strongly at the rear, giving keys a steep slant.

Having gotten used to the ‘flat’ keyboards of Logitech and Microsoft, this is not easy on the fingers. When you factor in that it’s actually healthier for your hands to have a high front sloping down towards the back, it’s no surprise that after a few hours of intense typing our hands would start to ache slightly. 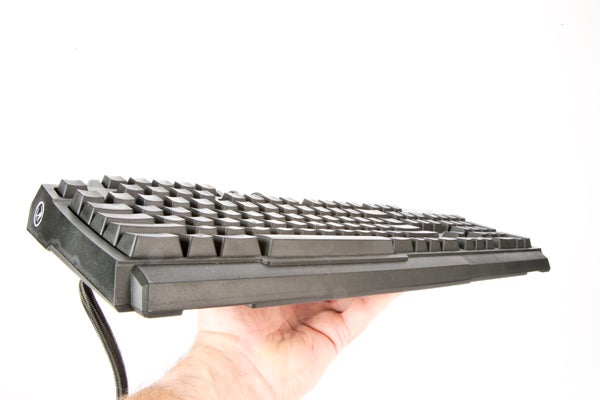 In every other regard, Gigabyte’s mechanical gaming keyboard is typist’s dream (though it took a wee while to adjust to the US layout on our sample). Not just the comfort of its materials but the superb feedback and audible click provided by its mechanical switches, makes it a pleasure to work on.

Mechanical Cherry MX Red switches are far superior to the membrane solutions found on many cheaper keyboards, and not just because of their greater durability and better-feeling feedback. A custom version of the Cherry MX Black switch, Reds offer lower operating force. In fact, the actuation point for these is 2mm for maximum response to your lightning reflexes. 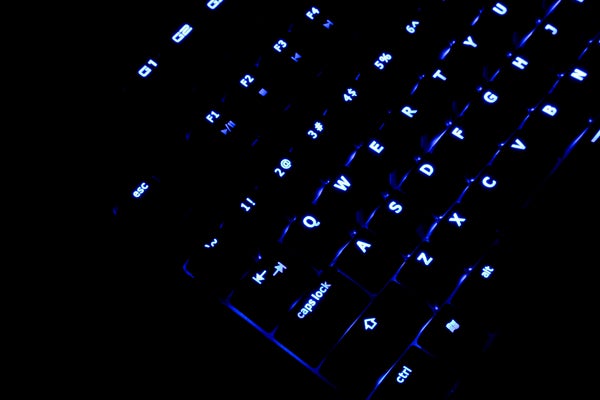 Ghosting also won’t be an issue on the Osmium. Where some keyboards have six-key anti-ghosting, Gigabyte takes that to a whopping 64 keys on its latest and greatest. In other words, no matter how many keys you press simultaneously, the Osmium will pick it all up.

Value
This is where the Gigabyte Aivia Osmium stumbles just a little, since you currently won’t find it at a reputable retailer for under £100. That doesn’t compare too well to cheaper mechanical gaming keyboards like the £78 Corsair Vengeance K60, while even the (admittedly membrane-based) Logitech G19 with its colour screen and internal processor is under £100 these days. 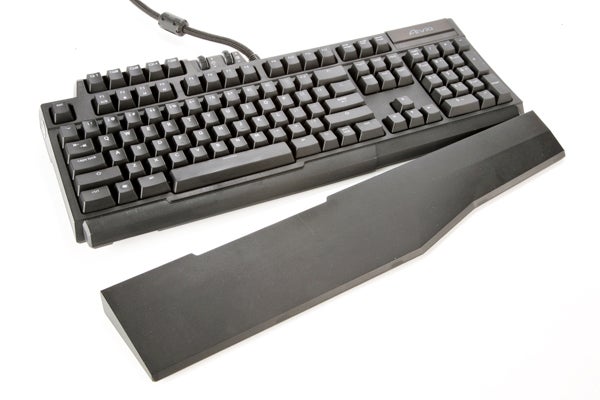 However, the Osmium offers more features than the K60, like its USB 3.0 throughput, and the K60 ‘only’ offers 20-key anti-ghosting compared to Gigabyte’s 64. We don’t think many would disagree that this Aivia is the better-looking peripheral, too.

Also, its pricing is competitive with the Razer Black Widow mechanical keyboard, which offers a similar feature set but uses arguably inferior Cherry Blue switches and again doesn’t include USB 3.0 – although Razer does give you more profiles and settings. 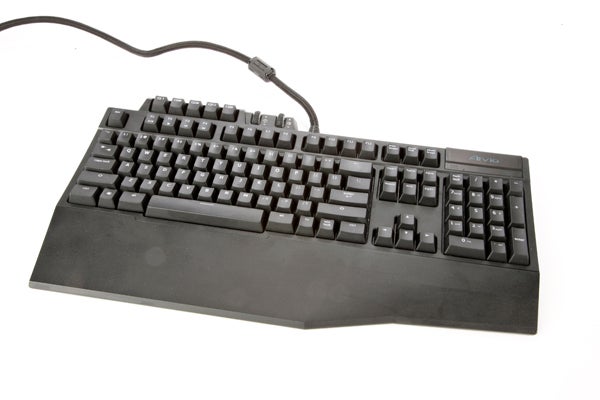 The £99 Thermaltake is probably more competitive with Cherry Black switches, 46-key anti-ghosting and a removable cable, but we’ll need to check it out to see how it compares.

Gigabyte has done a great job with its Aivia Osmium. It’s built like a brick, offers superb adjustable backlighting, high-quality mechanical key switches, the most impressive anti-ghosting we’ve yet come across on a keyboard, and niceties like USB 3.0 in addition to the usual programmable gaming keys. If your fingers aren’t bothered by its steep slope and you don’t mind the somewhat basic software, this gaming keyboard is worth every penny of its high asking price.