More than any other Ultrabook we’ve looked at, the Gigabyte U2442N packs in the specs – the highlight being its dual-drive storage system. But first things first. As far as processors are concerned, you can go with either an Intel Core i5 or more powerful Core i7. Our review sample sports a Core i5-3210M, which runs at 2.5GHz by default but can turbo clock up to 3.1GHz. To be honest, given the graphics card in this Ultrabook, most games are more likely to be GPU rather than CPU bound, so we reckon this should be adequate.

It’s backed by a whopping 8GB of RAM, which is more than you’ll find on most Ultrabooks – even gaming-capable ones like the Acer Aspire Timeline U M3 581T. This is great for intensive multi-tasking, video editing, and the like. It doesn’t hurt games either.

Storage is also pretty special. You can go for a 128GB or 256GB SSD as a speedy boot drive and for the most commonly used programs, along with a 750GB or 1TB hard drive to store videos, photos, and less frequently played games. Essentially you really do get the best of both worlds, speed and storage, unlike laptops that use hybrid SSD/hard drives. This is a really nice yet rare feature that puts this Gigabyte U2442N ahead of the Ultrabook pack.

All of the above gives rise to simply blistering general performance, but what are the games like? Gigabyte has gone for an Nvidia GeForce GT 640M with 2GB of RAM. While this is far from the heady heights of the top-end GTX 680MX, it’s the fastest we’ve yet seen on an Ultrabook, especially given the system that’s supporting it.

Indeed, the Gigabyte U2442N happily munched through our standard suite with just over 100fps in TrackMania and a solid 78fps average in Stalker. Even at the screen’s maximum 1,600 x 900 resolution and knocking Stalker’s detail up to Ultra, the U2442N maintained 48.3fps and a minimum frame rate of 20.3fps, which provides a smooth experience.

This is considerably better than the Acer Aspire Timeline U M3 581TG, which uses the same GPU but with half the RAM and a few lesser specs. Mind you, things start getting a little chugtastic if you try to max out more demanding games. Basically, the U2442N won’t power through the latest titles at maximum everything, but it does let you play most if you’re willing to compromise.

When it comes to noise, the Gigabyte U2442N stays very quiet until the dedicated graphics kick in, at which stage it produces a distinct and slightly annoying hum. Then again, while gaming you’re unlikely to hear this over the title’s music and effects.

Battery life on the U2442N is, quite frankly, not great. Okay, it’s downright terrible. Even taking into account that our test has become more demanding over the last few months, 3hrs and 29mins is rather sub-par – and that’s without properly utilizing the dedicated graphics, which would lower that number even further. Even with minimal usage, you’d be hard pushed to stretch the Gigabyte U2442N’s time away from a socket to over five hours. 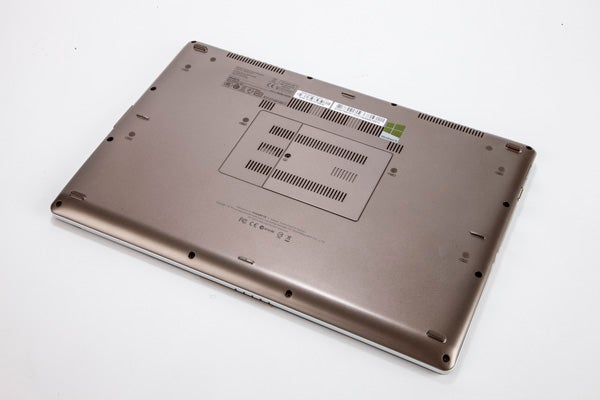 Starting at £799 with Windows 7 (which is arguably preferable for a laptop that doesn’t offer any touch-screen functionality anyway), the 14-inch U2442N gives you an awful lot of specs for the money – considering it’s an ultraportable, that is.

However, if you’re willing to go up to 15-inches and put up with a little more weight while taking a step back on the specs, there are other options with similar graphics grunt for considerably less. The Acer Aspire Timeline U M3 581TG with GT640 M, for example, can be found for around £500. However, it doesn’t offer an SSD, 8GB of RAM, or that rather nice 1,600 x 900 screen resolution (its screen quality is better though). 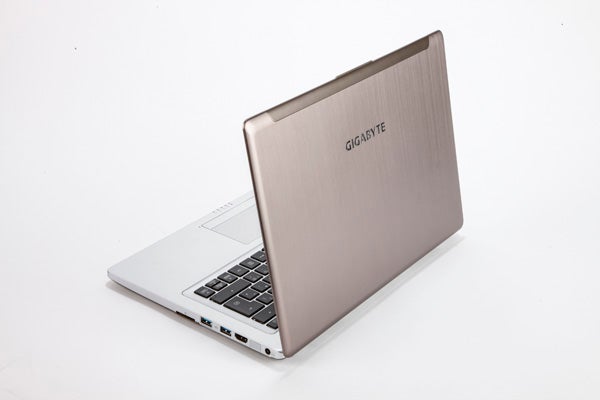 If we were going by specs and price alone, this game-worthy Ultrabook with its innovative dual storage system would get our recommendation. Unfortunately, the Gigabyte U2442N’s average design, mediocre if high-res screen, indifferent touchpad and poor battery life put a spoke in that wheel. If you’re after a powerhouse ultraportable that you can play at least some games on and are willing to live with its faults, then the U2442N is definitely worth considering. For the rest of us, we’ll just have to hope Gigabyte’s next slim gaming effort improves on this admirable but ultimately flawed effort.