What is the Gigabyte P56XT?

The Gigabyte P56XT is a pricey machine that’s taking aim at powerful rivals. It features one of Nvidia’s best gaming chipsets alongside an Intel Core i7 processor and a 256GB SSD – and, pleasingly, it sports a far more subtle design than many other gaming laptops on the market.

Design-wise, there are matte black metal features throughout and there’s a plain Gigabyte logo on the lid. Both sides of the device are decorated with only a narrow line of orange. That same colour is used on the power button and the hinges, and there are no unnecessary angles or lights. 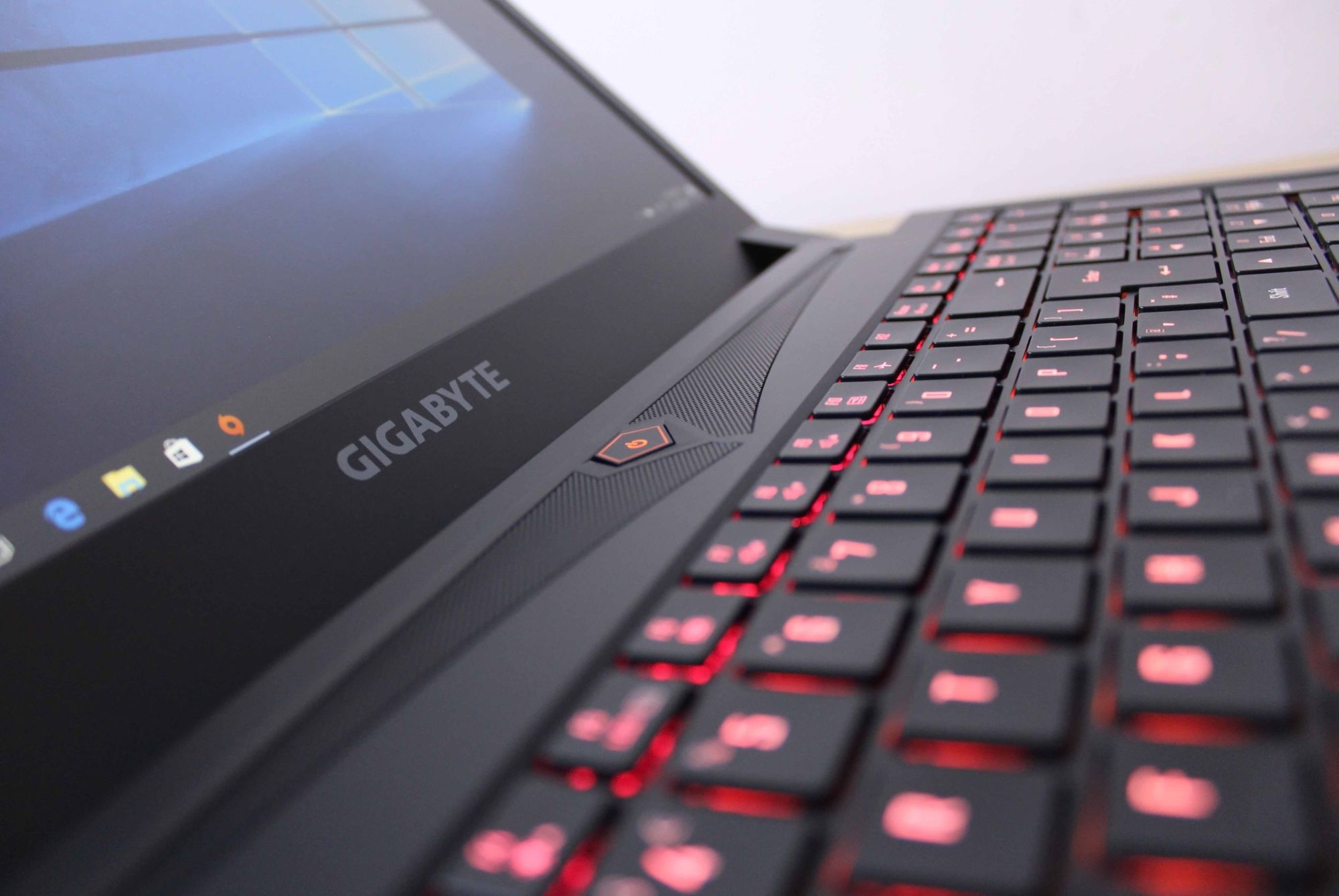 The P56XT may not look as lavish as some machines, but it is very smart – and build quality is good, too. The base of the machine is super-solid, both around the keyboard and on the underside, and the hinges are smooth and sturdy.

My only issue is the screen, which distorts a little when its rear panel is pressed; but I’ve tested far worse.

The Gigabyte’s strength does mean that it’s chunkier than some other gaming notebooks – at 31mm thick, it’s around half a centimetre wider than many 15.6-inch gaming machines. That said, a 31mm design isn’t going to prove too problematic in a bag, and its 2.6kg weight is fine. It’s certainly smaller than my most recent GTX 1070 laptop review – the HP Omen 17 with 17.3in screen has a 34mm-thick frame and weighs in 3.35kg.

The Gigabyte’s size isn’t a deal-breaker, although clearly this laptop isn’t for you if you’re after something slim and light.

Not only does the Gigabyte offer smart design, then, but this machine is versatile too. It has USB 3.1 and Type-C ports, Thunderbolt 3, a card reader and a DVD writer that can be swapped for additional storage. 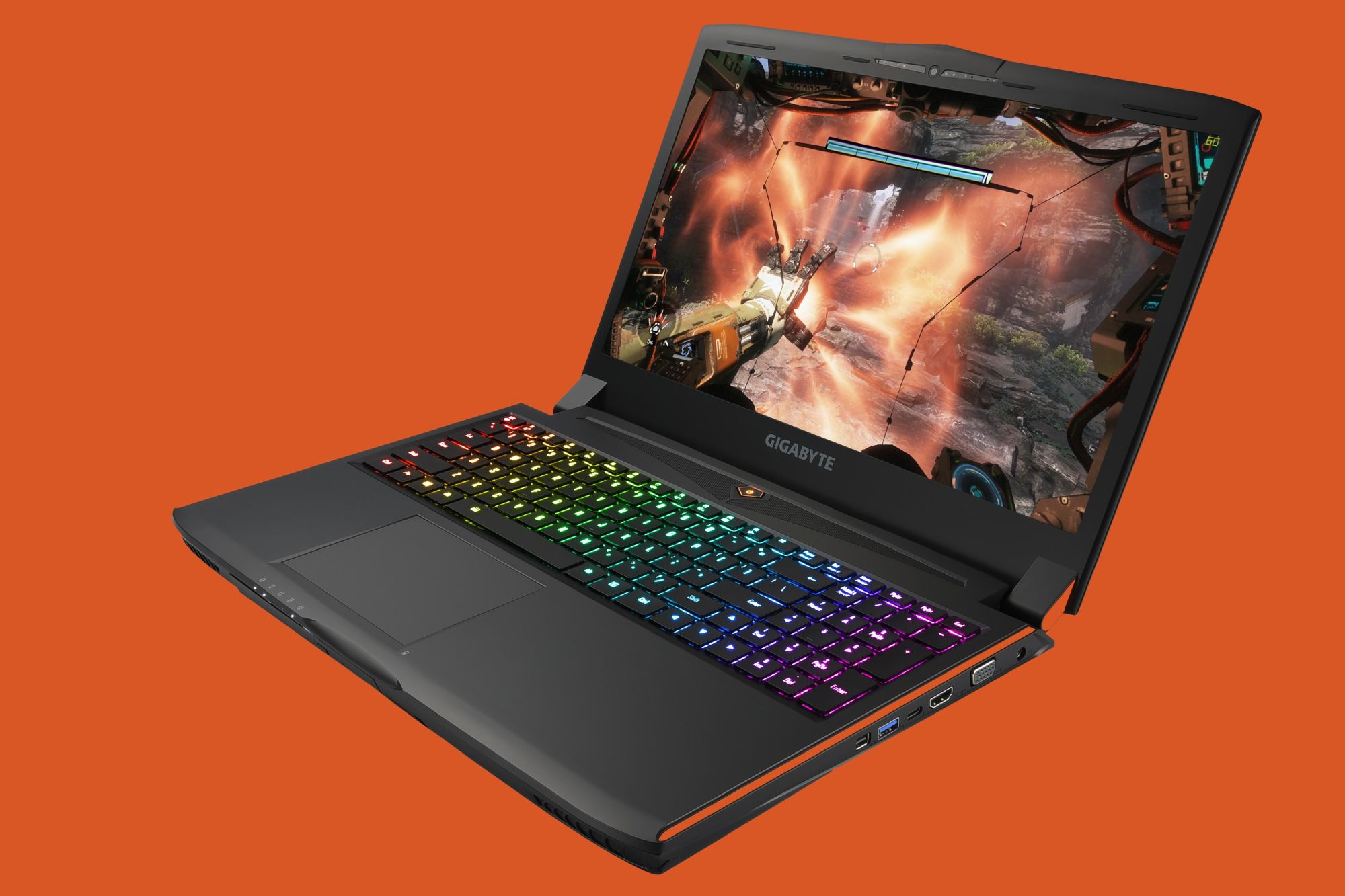 The base panel can be easily removed to access the memory slots and hard disk, and there’s a spare M.2 slot as well. Cooling gear is present, too, although I was surprised at its modest dimensions considering the GTX 1070 graphics chip and Core i7 processor.

The Gigabyte is an unfussy, well-built machine that looks smarter than most gaming notebooks. That will appeal to some and repel others, but I like it – its design is comparable with the high-concept Omen. The Gigabyte also offers better build quality and internal access than the £1520 HP.

The scrabble-tile keyboard has a number pad, full-size Return and space keys. It suffers no layout issues, and its RGB LEDs can be customised in Gigabyte’s RGB Fusion app, which has the usual selection of patterns and customisation options. Macros and gaming profiles can be saved to the keyboard, too.

The keyboard is a little different than most other scrabble-tile designs. Each key has far more weight to it than those elsewhere, which make the Gigabyte’s typing feel less hollow.

That’s an improvement, but it isn’t all good news. The keys don’t have much travel, and the buttons are a tiny bit slower than the buttons on other laptops – perhaps because of that extra weight. 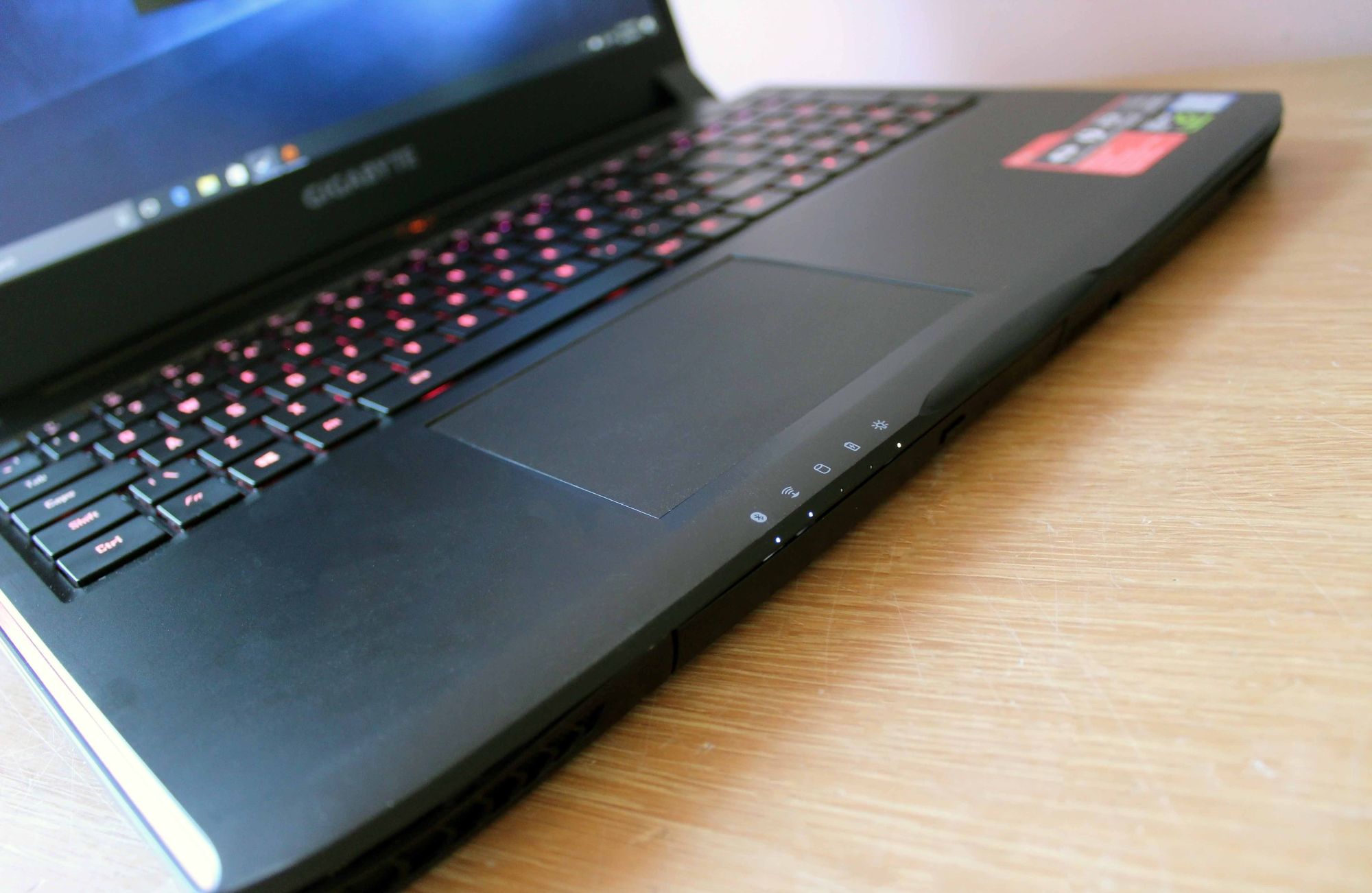 Similarly, the trackpad too has some minor issues. The surface is fine and the buttons have enough speed, but they push down just a little too far – a design that means they can’t quickly mimic the light movements of the best gaming mice.

Ergonomically the Gigabyte is good, and better than many other gaming laptops, but it doesn’t quite achieve greatness.

The Full HD resolution is middling when you consider that the GTX 1070 can easily handle 1440p. Sadly, there’s also no sign of Nvidia G-Sync or a high refresh rate, which would have been a good way to use the GPU’s extra grunt. That’s something the HP does include. The screen’s middling specification was matched by average benchmark results.

The brightness and black levels of 290nits and 0.33nits are fine, and the resulting contrast ratio of 887:1 falls into the middle of the pack – behind the HP’s 976:1. It’s good enough to provide solid colours and deep black tones, but laptops with better contrast offer more nuance and depth.

The Gigabyte’s Delta E measurement (where a number closer to zero means more accurate colours) of 0.73 is fantastic and better than the HP, but that’s the only truly excellent result that this screen pumps out. The factory default colour temperature of 8264K is too cool, which means colours aren’t as vivid as they could be. HP’s machine, meanwhile, hit 6612K.

Gigabyte includes a couple of other colour temperature modes in its SmartManager app. Choosing the 6500K preset drops the colour temperature to 8066K, which is barely better, but the other options are no good – they all leave the screen with a distracting red pall. 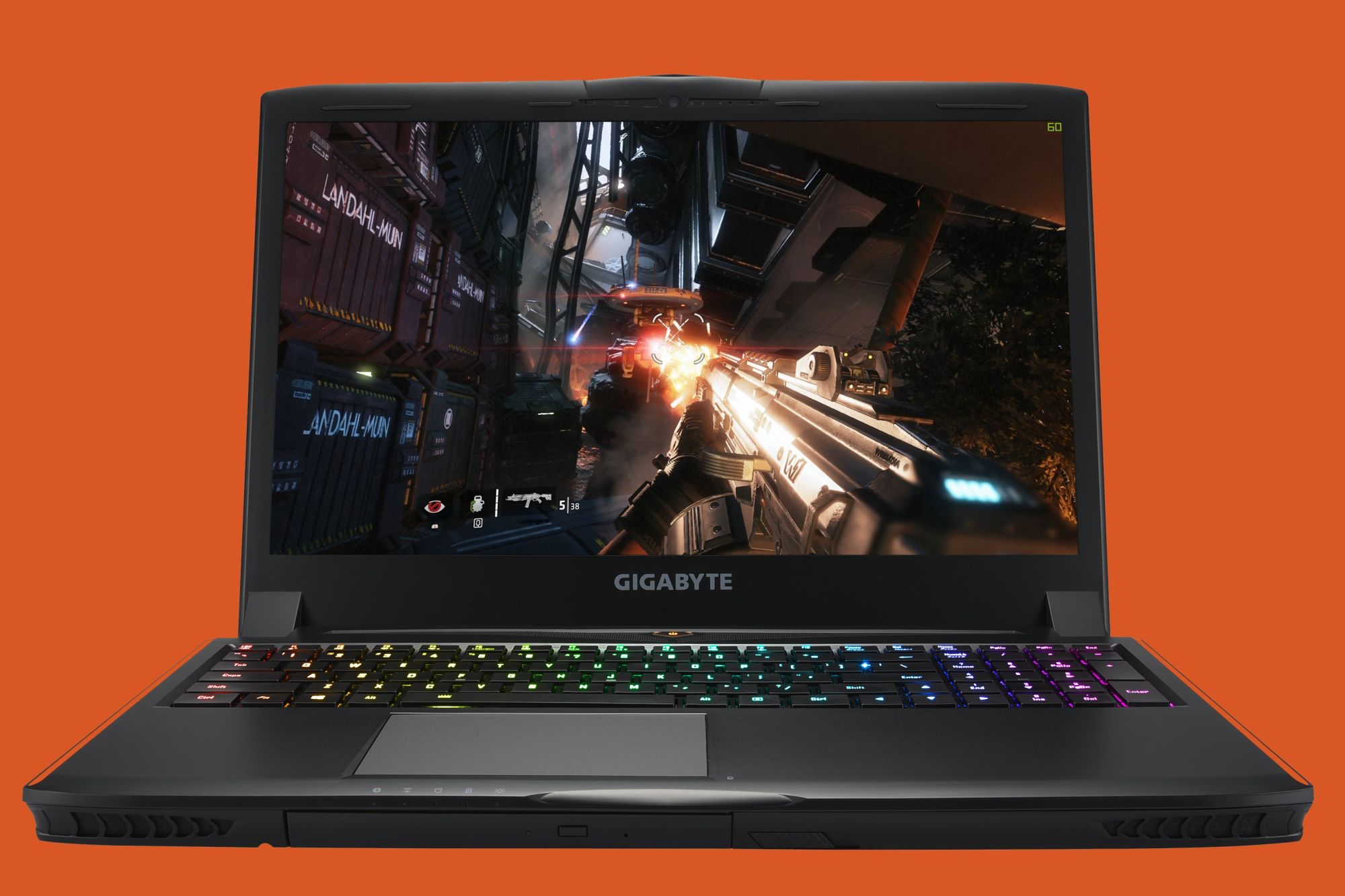 The P56XT’s uniformity results are mediocre, with a brightness deviation of 15% along the top row and 8% at the bottom of the panel. Those figures are fine, but the HP was better.

It’s a similar story when it comes to colour gamut coverage. The Gigabyte can display 81.8% of the sRGB gamut, with the panel falling short with lighter colours – reds, purples, greens and blues are susceptible. HP’s machine managed 87.7%.

These results are broadly fine: contrast is solid, black levels are deep, and there’s enough brightness and accuracy to ensure that colours are reproduced well. Importantly, none of the Gigabyte’s lesser scores are poor enough to cause problems. This means the screen can easily handle games and movies, but it isn’t good enough for colour-sensitive work. It also isn’t as good as the HP.

The speakers are reasonable, with especially good clarity with voices, and other treble-heavy sounds towards the top of the range, but the bass and mid-range are left to languish a little – those lower sounds often end up blending together. Once again, though, the HP is better.