The Vivoactive 4 isn't a giant step forward from the Vivoactive 3, but it remains one of the best mid-tier fitness trackers on the market. Highlights include stellar GPS location tracking, inbuilt storage for music and maps and the ability to track pretty much every sport under the sun.

The Vivoactive 4 is the latest mid-range GPS smartwatch from Garmin. It sits below the more fashion-conscious Garmin Venu and ultra-marathon/triathlete focussed Garmin Fenix 6,  and is being pitched as the ideal fit for mid-tier golfers and semi-serious athletes.

Offering stellar fitness tracking, a wealth of new features and a distinctly smartwatch like design, the Vivoactive is a great middle ground for people that regularly exercise but don’t want to have to change their watch when finished.

The only downside is that the watch’s screen can be a little finicky to use when wet which will be an issue for people that regularly exercise outdoors. Garmin’s rather disappointing app ecosystem also means that, while it now has the looks, it’s still nowhere near matching key rivals like the newly discounted Apple Watch 3, when it comes to smart functionality. 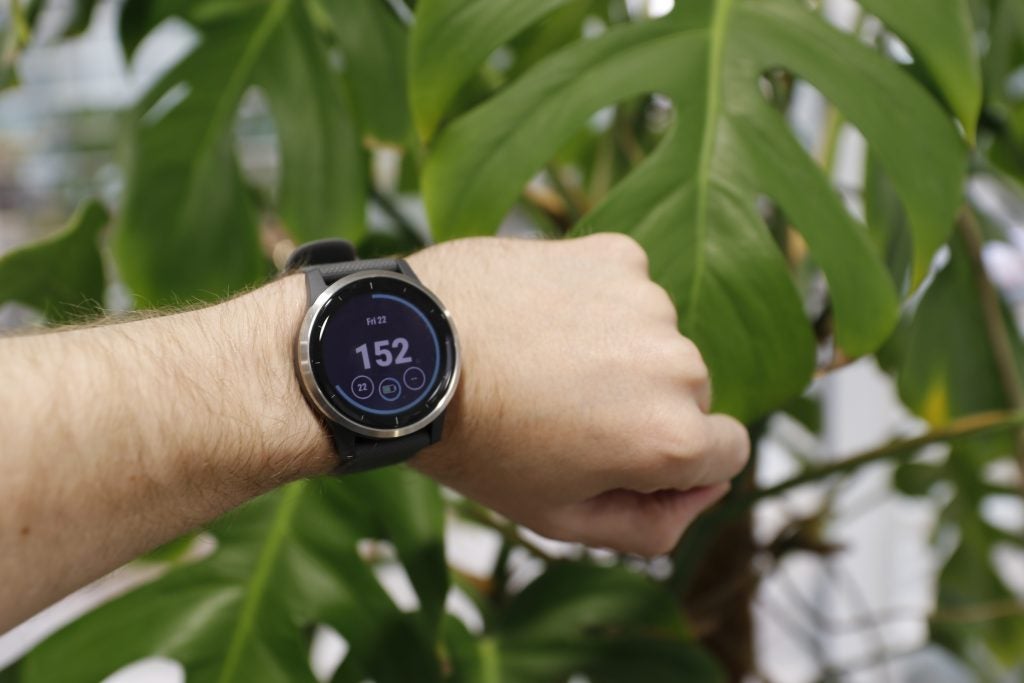 Powered down you’d struggle to tell the Vivoactive 4 apart from the Garmin Venu, which has a close to identical design.

This is no bad thing as the spherical metal watch face looks suitably premium and, unlike the chunkier and more hardcore Garmin Fenix 6, looks equally at home in the gym and out and about.

The Vivoactive 4 also ticks all the right boxes when it comes to toughness and usability. It’s available in 40mm and 45mm size options and with a variety of different straps that makes it easy to customise it’s look and fit to meet your taste.

The 5ATM water resistance and use of Gorilla Glass 3, which covers its touch Garmin Chroma screen, means it’ll survive aquatic adventures and the odd bump and scrape. Using it in the gym, the screen easily survived an accidental encounter with the side of a weights bench crack and scratch free.

Under the hood Garmin’s made a few subtle, but important tweaks. The Vivoactive now comes with local storage for up to 500 songs as standard, there’s no separate music variant. It has also updated the watch’s UI to make the watch easier to navigate using the touch screen.

The UI changes, for the most part, are positive. Like past Vivo-series watches the watch lets you scroll up and down through a set of customisable screens for things like vital health stats, workout data, music controls and any installed apps you have. I’m a big fan of the revamped health stat widget, which looks a lot like the ones you’ll find on Garmin’s more expensive Fenix/Forerunner devices and offers a convenient single pane of glass view of your current performance/condition.

There are a few issues however. The touch screen is great for the most part, but the touch inputs can get a little finicky when water or sweat gets involved. Running in the rain the screen occasionally became unresponsive and wouldn’t register simple commands, like skip track.

People that want a hybrid smartwatch-come-tracker should also be aware the Garmin IQ store is still woefully behind the competition – to the point it only recently got Spotify – and is fairly clunky to use.

The app library is separate to the main Garmin Connect app and features a very limited selection of non-fitness applications. Even those that do work are fairly unintuitive and make the Garmin store feel a step behind Fitbit, let alone Apple. In short, if you want anything more advanced than music and notifications out of your smartwatch you’ll probably want to look elsewhere. 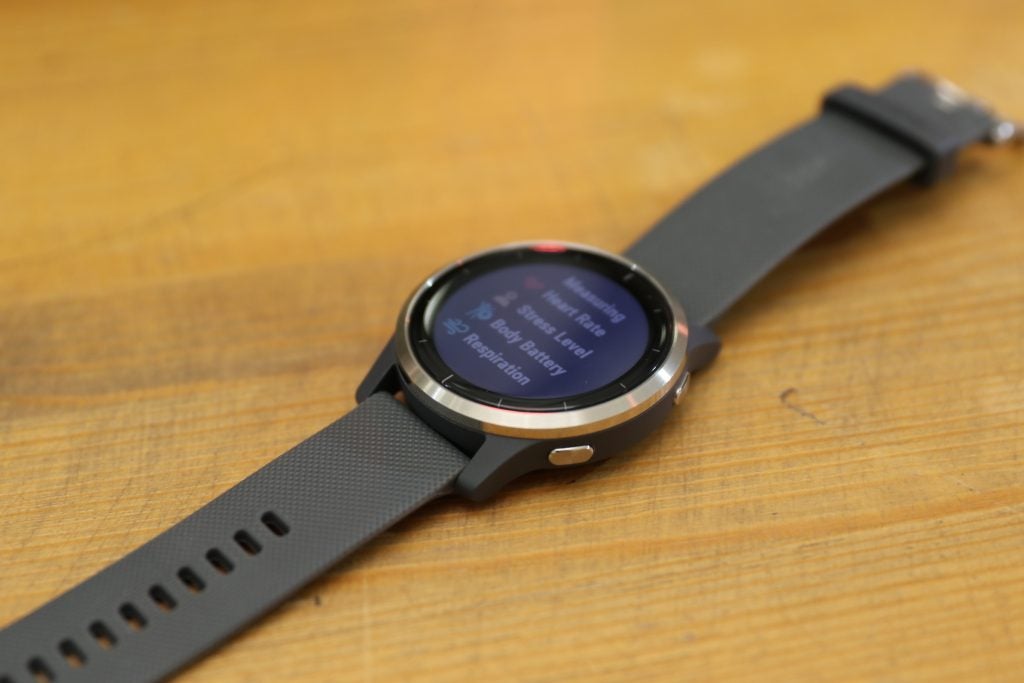 Garmin Vivoactive 4 Software – Tracking is as great as ever

Thankfully the Vivoactive 4’s stellar fitness tracking portfolio more than makes up for its. smartwatch shortcomings.

The Vivoactive comes with all the usual trimmings expected of a tracker, including stellar GPS location tracking and the ability to monitor pretty much every exercise you can think of – seriously, you can track everything from your morning jog and weights training to Yoga and cross country skiing.

For basic tracking the Vivoactive 4 is excellent and easily matches the performance I’ve come to expect from Garmin wearables. The GPS lock is snappy, despite the move to a new Sony part, and I’ve never noticed any discrepancies in distance tracking testing the watch on a track I know is roughly 5.3km. Heart rate monitoring, though not as accurate as a dedicated HRM strap, also offers uniform figures and a great breakdown of intensity minutes post workout.

Yoga and free-weight fans will also be pleased with the watch’s new guided workout animations. These work in a similar way to the ones you get on Fitbit trackers, offering graphical guides on how to do specific exercises. The guidance is accessed and downloaded via the Connect app and is a great upgrade for newbie gym goers.

This great, but what really sets the Vivoactive 4 apart is the wealth of extra metrics Garmin’s added to it. Specifically Garmin’s add the ability to track “estimated sweat loss,” respiration rate and pulse ox level.

Estimated sweat loss is a difficult metric to gauge, but it adds to the Vivoactive 4’s already diverse set of post workout stats, which include how well you’ve performed, heart rate zones and recommended recovery times.

The respiration tracking is complemented by new guided breathing exercises which aim to help you de-stress when your heart rate is elevated. The feature works well enough, and are thoroughly more detailed than the ones you’ll get on Fitbit, though personally I’ve still never felt the need to use the functionality.

The addition of pulse oximetry sensors is a more important update that will appeal to health conscious users. These offer an estimate how much oxygen your blood is storing and is a key metric that gives an overarching view of your current health. Radical drops indicate a serious problem. Fitbit’s offered the functionality for a while and, though most users won’t use it, the addition is welcome nonetheless. Be warned though, if you set it for all day tracking the feature will impact the Vivoactive 4’s battery life. 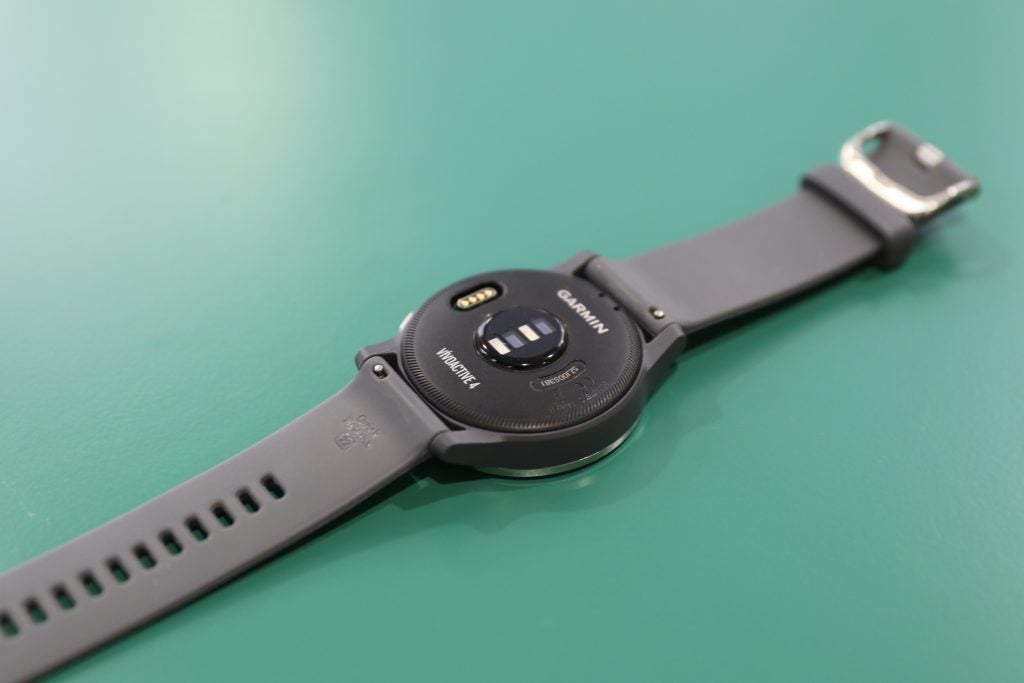 Garmin quotes the Vivoactive 4 as offering around eight days use off a single charge and for the most part I found the quote is accurate, if you limit its pulse oximetry tracking.

During my two weeks with the device I generally found, if I charged it on Sunday, it’d last to late on Saturday morning with regular use. This entailed tracking my half hour morning workout, listening to music from local storage during my weekly 5km run and checking notifications, health metrics and the time throughout the day. Location and all day pulse oximetry tracking dropped the rate to around three-to-five days, but this is still pretty decent and more than good enough for most users.

Should you buy the Garmin Vivoactive 4?

The Garmin Vivoactive 4 isn’t the cheapest wearable on the market, but if you’re after a fitness tracker with all the trimmings that can be worn comfortably outside the gym, then it’s one of the best available.

It offers the stellar location and health tracking services that have let past Garmin trackers be a constant feature in Trusted’s best fitness tracker and running watch guides, plus a few added extras. Highlights include a more diverse portfolio of activities to track, guide workouts, local music support across the entire line and pulse ox tracking.

The only downside is that it’s smartwatch application library is still woefully behind the competition. More casual users and people that want a device that’s primarily a smartwatch would be better off investing in the Fitbit Iconic, or an Apple Watch as a result.

The Vivoactive 4 isn’t a giant step forward from the Vivoactive 3, but it remains one of the best mid-tier fitness trackers on the market. Highlights include stellar GPS location tracking, inbuilt storage for music and maps and the ability to track pretty much every sport under the sun.