Another headline feature of the Galaxy Tab S3 is the S Pen stylus, which comes in the box rather than as a pricey add-on (listen up, Apple). It’s a squat, plastic pen that matches the colour of the tablet and feels nice to hold. It’s noticeably smaller than both the Apple Pencil and Microsoft’s Surface Pen. I’m also a fan of the fact that it has flat sides, to stop it rolling away when you place it down on the table.

The S Pen offers four times the pressure-sensitivity of Apple’s Pencil and can tell whether you’re shading or putting more pressure on the nib, which makes it very effective for everything from jotting down notes to doodling and digital painting.

Samsung provides a couple of pre-installed apps: Notes and an odd social network for sharing drawings called Pen.UP that seems to crash every time I try to use it. You can download Sketchbook Pro for free from Samsung’s app store, which is a far better app for making the most of the S Pen. 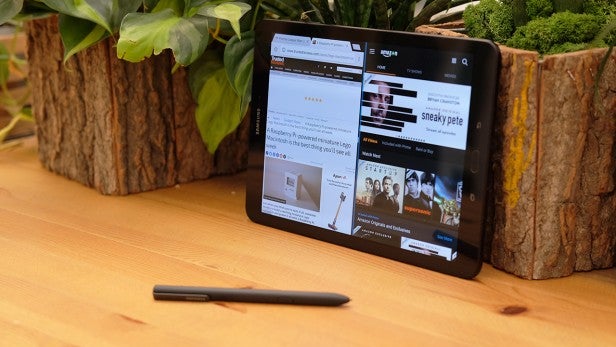 It would have been nice to have a slot in the tablet to store the pen when it’s not in use, but considering how thin the Tab S3 is, that was never really an option. If you pick up the keyboard accessory, something I haven’t managed to test yet, then there’s a neat pen loop attached to that.

Performance on the tablet is great, even though its spec sheet reads more like a early 2016 flagship phone than an uber-tablet from 2017. There’s a Snapdragon 820 processor running the show, with 4GB of RAM and 32GB of internal storage. I’d have liked to see more storage on such a media-focused tablet, but at least there’s a microSD card slot.

In Geekbench 4, the Tab S3 picks up a multi-core score of 3945 – which matches similarly specced phones and beats Google’s Pixel C, which scored 2816 on the same test. There’s enough grunt to have two apps running side-by-side, and it handled every game I tried just fine.

My biggest issue with the Tab S3 is its software. Android 7.0 is a great phone operating system, far better than iOS 10 in my opinion, but it doesn’t translate well to tablets. Samsung has tried its best to alleviate some of the issues with its own modifications, but it still feels limited.

There is multitasking, and you can drag two apps next to each other to watch a video and read an email at the same time, but it seems to only allow the app that’s in focus to do anything. For example, if I have Slack open on one side and Word on the other, I have to actually tap the Slack window to bring it back to life and update the message thread.

You can also pop a video out into a floating window, but again the implementation isn’t very good. The video window keeps stopping, and it seems to disappear entirely whenever I open up a new app. The idea is there, but the ways it works is counter-intuitive.

Then you’ve got the general issues with Android tablets. Apps are rarely built for the big screen, and most are blown-up phone apps that don’t utilise the 9.7-inch screen well. Even icons on the home screen look blurry because developers clearly haven’t built them to fit this size and resolution. Coming from an iPad with its fantastic array of specifically designed apps, the Tab S3 feels hamstrung.

There are some highlights, and most of these come from Samsung itself. The Secure Folder gives you a place to store important files and photos behind the fingerprint scanner, and the Game Launcher boosts performance for more intensive titles. 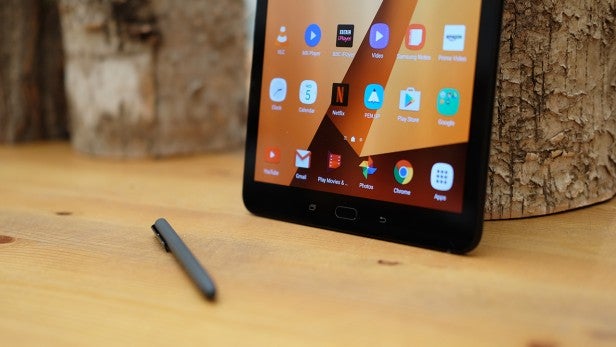 The camera on the back of the Samsung Galaxy Tab S3 is pretty terrible, but then I wouldn’t expect much else from a tablet snapper. Considering it’s got a 13-megapixel sensor, a lens with an f/1.9 aperture, and a flash, it’s actually somewhat surprising pictures lack detail and depth.

But you really shouldn’t be using a tablet for taking pictures and I am going to hazard a guess that the phone sitting in your pocket has a much better camera.

The front-facing camera is more important on a tablet, and I would’ve liked Samsung to try a bit harder with the one here. It’s 5-megapixel, with an f/2.2 aperture, and it’s fine for video chats and not much else.

The camera app, plucked straight from the Note 7, is very good, and has a great UI and lots of options.