As a joyous celebration of music, Fuser elevates the rhythm genre to a whole new level where gameplay can remain as addictive as ever, but now players are encouraged to explore the tools at hand and create something entirely new. Once you find your groove, it's almost impossible not to get absorbed into a one-person rave – dancing along to the mix you've created. Fuser doesn't just revitalise the rhythm genre, it gives it a whole new style.

The visionaries behind Rock Band are back with Fuser, a brand new title that meshes Harmonix’s penchant for rhythm games with the complexities of modern deejaying.

When the rhythm game genre collapsed back in 2010/2011, everyone was quick to lament the demise of Guitar Hero, but my mind was set squarely on the implications for the DJ Hero franchise. At that point, the Guitar Hero series – whilst entertaining as all heck – saw no shortage of entries during its peak, but the equally superb DJ Hero series only saw two games released under the banner.

This was a huge shame because not only did DJ Hero have a brand new peripheral that used an almost entirely different set-up than its Guitar Hero counterparts, but it also gave the public an insight into what it means to be a DJ. Blame David Guetta, but I didn’t have much reverence for the profession until DJ Hero came along and showed me what could be done with mixing several songs together to create something new.

The agonising 10-year wait for something to fill the void is finally over, with Harmonix taking the stand with its own interpretation of a DJ-inspired rhythm game, and this time there’s not a peripheral in sight. 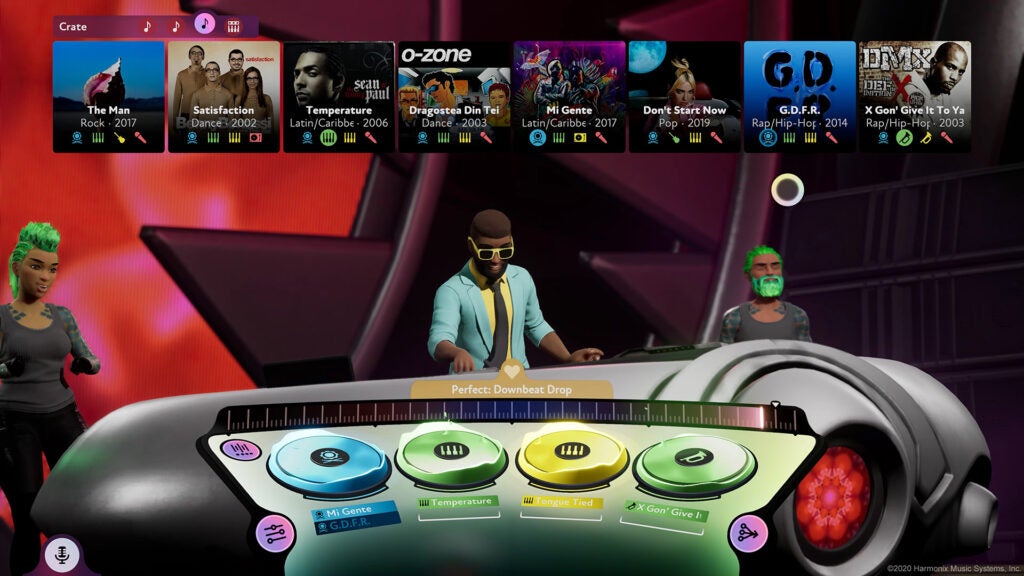 The fact that Fuser is played with nothing more than a regular controller already sets it apart from the peripheral-heavy experiences of previous rhythm games, but once you get into the gameplay it’s easy to understand why Harmonix has tried to keep the control input as straightforward as possible.

At first glance, everything seems deceptively simple. You have four empty decks across the bottom of the screen and a collection of songs across the top. You can fill these decks with the various components from any of these songs to create a mix. For example, you can combine the beat from Billie Eilish’s Bad Guy with the guitar from Smash Mouth’s All Star, while Dolly Parton sings Jolene.

It sounds absurd, and it is, but half the fun is in testing out these different cacophonies to find something that actually works on its own. My own two cents in this regard is that Sean Paul seems to work with everything, whilst Rage Against the Machine barely works with anything. There’s a definite learning curve to committing the best mixes to memory, but that’s part of what makes the Fuser so addictive – it’s also just the surface.

Once the game’s confident that you’ve got the core gameplay down, you’re introduced to the concept of Downbeats and Pickup Drops, all of which involve you throwing in various components at specific times during a song to obtain more points. This is in addition to crowd requests – a timed opportunity to please the crowd even further by implementing a specific song. 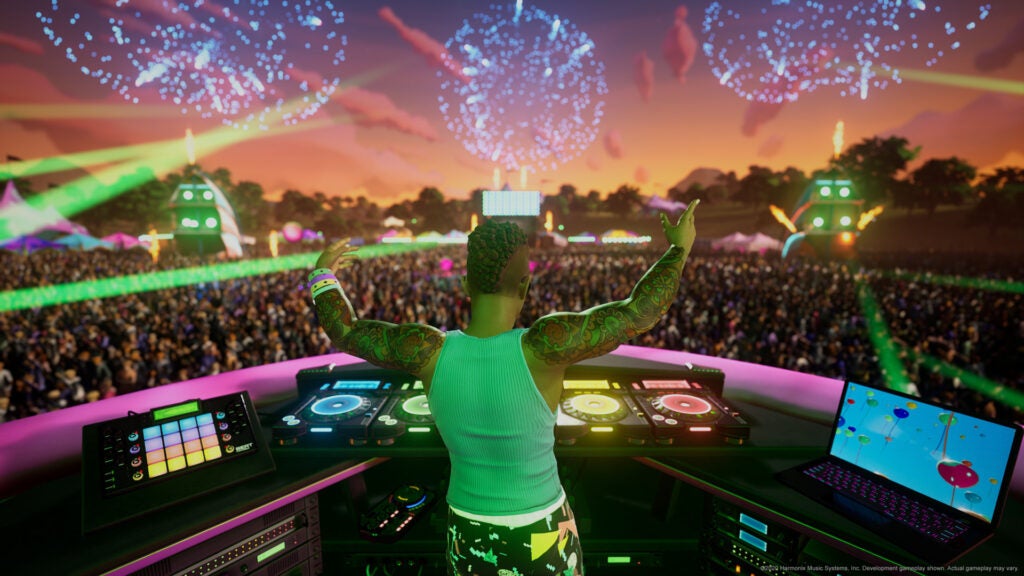 As if that wasn’t enough, the game then goes even further by throwing instruments into the fray, wherein you can create a loop on a digital keyboard or drumkit, and place it into the mix where you see fit.

After a substantial amount of time with the game, I’m now at point where you’re expected to do all of the aforementioned tasks alongside regular tempo and key changes, as well as cueing up extra songs to change the mix completely with both triggers. By the time you’re introduced to all of its elements, Fuser feels less like a typical rhythm game and more like a full-blown DJ simulator in disguise.

There’s no denying that Fuser is a far more technical experience than DJ Hero ever was, and those who appreciated the pick up and play elements of the Guitar Hero games might be put off here, but I just can’t stop playing it.

I’ve had several times throughout the game where I just have to put down the controller to take in how seamless everything feels. The fact that the songs featured within the game have been adapted to ensure they all work with one another is no easy feat, and yet each session has me bopping my head and tapping my foot incessantly. 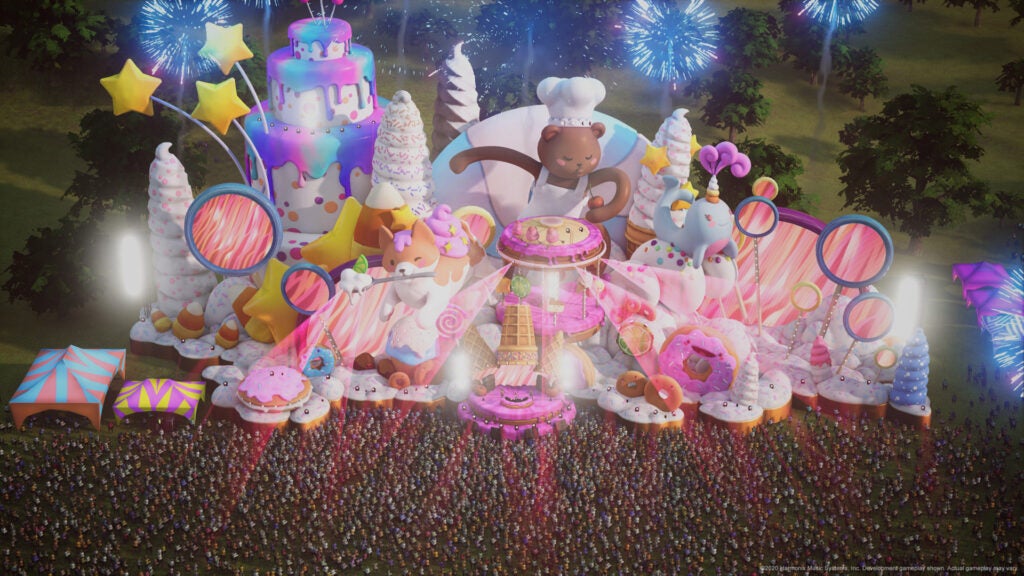 Because of the sheer amount of controls at your disposal, Fuser also feels like the first rhythm game that rewards creativity. It’s no longer a case of trying to beat someone’s high score on a particular song, but in making your own mark and using your intuition to create something that hopefully resonates with others.

Of course, if someone presented me with a DJ deck that offered up the same possibilities, I wouldn’t have a clue where to start, so it’s impressive that Harmonix has managed to boil down all that into a format that makes sense.

Outside of the game’s career mode, there are plenty of other options to give the game some longevity. Freestyle is exactly what it says on the tin – taking away the need to satiate the crowd and simply letting players enjoy the core gameplay however they please.

Because there’s no time limit in Freestyle mode, you could potentially use this as your own personal DJ system and host a party with it. With the current state of the world however, it’ll probably be some time before we can enjoy any Fuser-led parties, but the game feels more than ready to take on such a task. 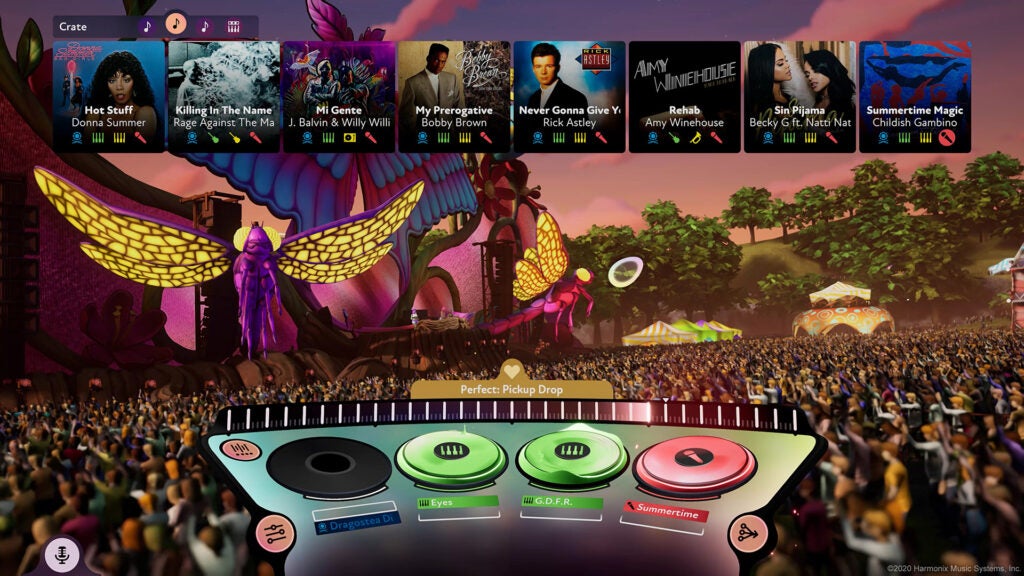 There’s also a sizeable online component for when you feel your DJ skills are at the right level to be shared with the world. ‘Battles’ is easily the most frenetic option here, letting you go head to head with another player as you try to be the one who can oblige the game’s requests the fastest.

It’s a bit tricky to wrap your head around at first, but once you understand how the mode works, it become unbelievably satisfying to see that you’ve created a mix so strong that it’s wiping your opponent’s song choices off the board.

If you’re after something a bit more straightforward, then the ‘Co-op Freestyle’ mode has you covered. In turns, up to four players get a chance to lay down their best mix and wow not only their competitors, but also anyone spectating the match. Sounds simple? Well, the preceding mix remains on the deck when it’s your time to shine, so you have to decide if you want to tweak someone else’s mix to perfection or create something entirely new but risk breaking the natural flow in the process.

Taking the energy down a notch, Fuser’s ‘Social’ mode is probably where the game will shine, particularly with streamers and content creators, as it holds weekly challenges in return for in-game items. These challenges ask users to submit a small mix that complies with the requested genre or vibe, with the determined winner reaping the benefits of fame and character clothing. 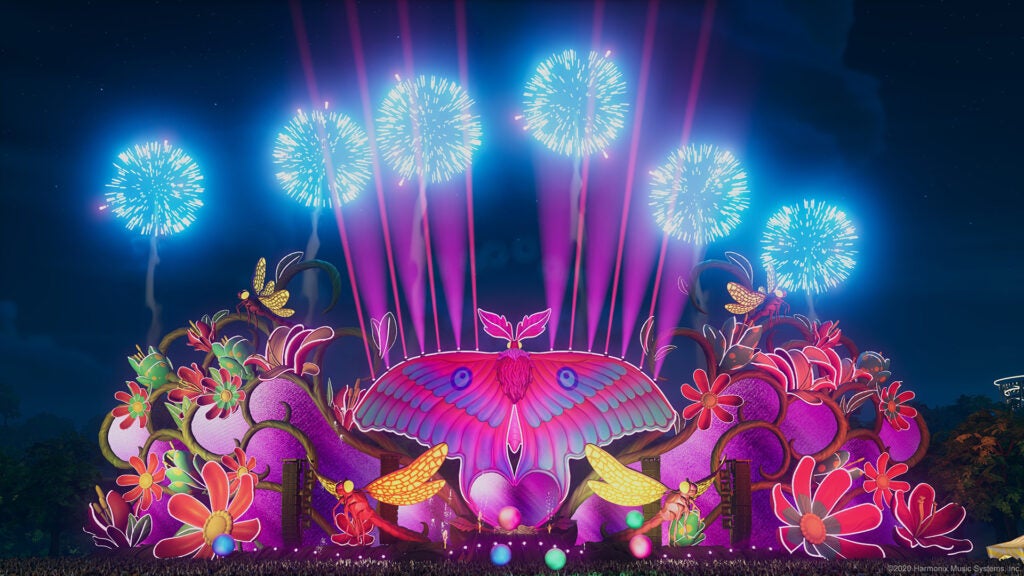 Speaking of which, underneath Fuser’s gameplay modes lies a fairly robust character creator/editor. This is where the game feels most closely connected with the Rock Band series, as you can once again adorn your characters with some outlandish kit, including some absurd head-covering masks that would have even Daft Punk raising their eyebrows.

It seems fitting that after a long absence, it’s the original pioneers of the rhythm genre that are now bringing it back with full force into the 2020s. Much like Rock Band and Guitar Hero, Fuser seems simple enough at first, but while those past titles stopped short of actually teaching you how to play an instrument, Fuser goes that extra mile by giving you the tools that a professional DJ would have at their disposal.

Harmonix has finally made good on the concept of music mixing offered up by its DropMix card game some years ago, creating a gameplay loop that’s immensely satisfying to play and incredibly addictive once you understand the mechanics. Time to get the sparklers out – the rhythm genre is back.