Melody of Memory is a loving homage to the legacy of Kingdom Hearts, aiming to honour almost two decades of absurd excellence whilst also forging a new path forward. If any franchise is going to make a rhythm game an integral part of its overall plot, it's Kingdom Hearts, and I wouldn't have it any other way.

Kingdom Hearts is beloved for its iconic characters, wondrous sense of imagination and melodramatic storytelling, but none of this grandeur would be possible without the musical stylings that underpin it.

Yoko Shimomura has helmed the franchise as a composer for almost two decades, and her work is instilled in the minds of millions. Even a few select chords of Simple and Clean or Dearly Beloved will reduce even the most hardened of fans to tears, and that alone speaks to the power Kingdom Hearts has, and why many hold it so dear.

I’m one of those people, with the franchise occupying a special place in my heart that hasn’t wavered over the years. Kingdom Hearts might be utterly absurd in a multitude of ways, but it presents itself with such emotional conviction that it’s impossible not to be swept up into its wondrous mixture of cute anime boys and overblown Disney cameos.

Now, Square Enix plans to celebrate the series’ legacy with Melody of Memory. Developed by Indieszero, this is a rhythm game which aims to retell the events of Sora’s journey thus far, while also forging ahead into new pastures that are yet to materialise. It’s a passionate love letter of whimsical brilliance that knows how to spoil fans, whether that’s through extended renditions of classic tracks or oodles of collectibles to uncover.

Melody of Memory is such a nice surprise, and goes down smooth after a delirious schedule of big releases. Consider it a soft warm blanket to sink into, just make sure you don’t mind sharing it with a bunch of spiky-haired anime characters. 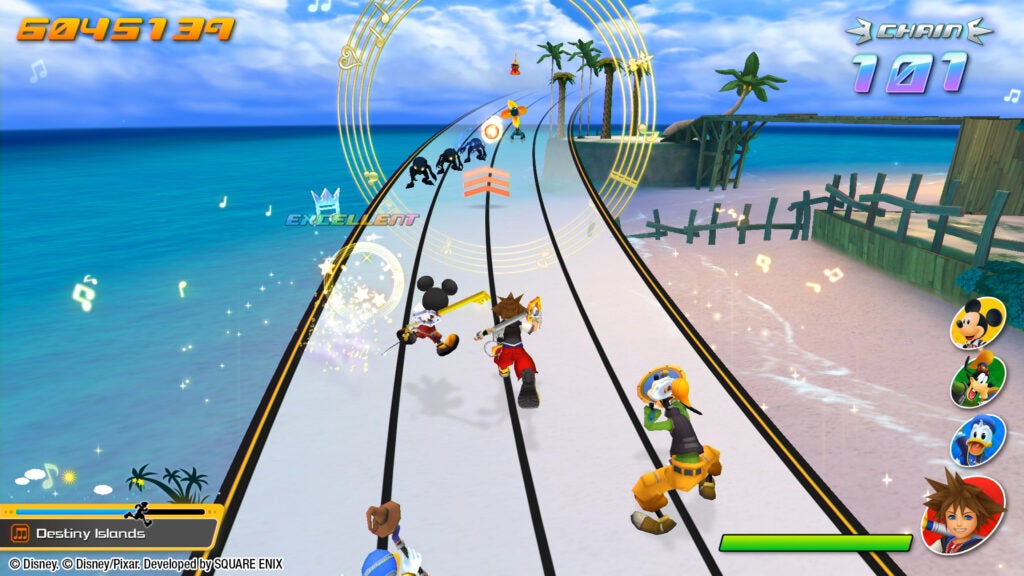 As I mentioned earlier, Melody of Memory takes on the gargantuan task of retelling the entire story of Kingdom Hearts, albeit in a considerably condensed manner. This is done from the perspective of Kairi. The underappreciated damsel in distress acts as the narrator, surfacing after certain stages to spill some exposition alongside video packages of cutscenes from past games. It’s well executed, although it does leave out a number of important details.

For newcomers, it’s a surface level introduction to the proceedings, but I feel Melody of Memory is designed around existing lovers of Kingdom Hearts, hence why it’s little more than a light recap before diving into new territory amidst the campaign’s end. I won’t spoil any of that here, and there’s still plenty I’ve yet to even uncover, but don’t expect Tetsuya Nomura to hold back when it comes to thrusting the franchise into absurdity once more.

I adored revisiting countless narrative arcs from a new perspective, many of which Kairi was absent from when originally told. The crimson-haired heroine has often been relegated to a damsel waiting to be saved, seldom having a chance to shine beyond a few special moments. Because of this, it was great to see her take the spotlight, even if I would have welcomed further opportunities for Kairi to shine. With any luck, future entries in the franchise will do just that. 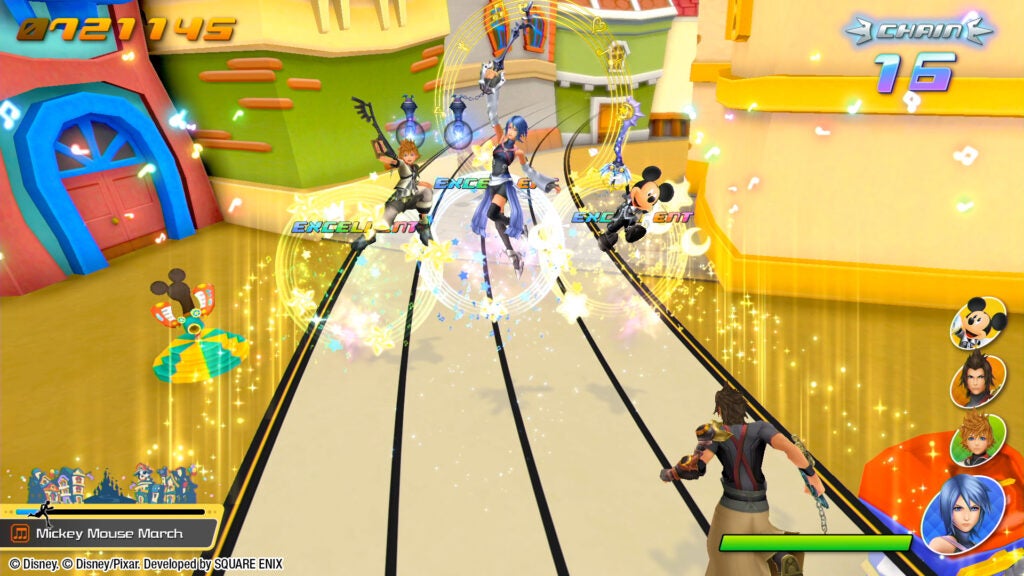 As a rhythm experience, Melody of Memory is incredibly easy to learn, but this simplicity quickly evolves into some hugely challenging stages, refusing to hold your hand even on the standard difficulty. All stages are executed with two shoulder buttons and a single face button, which serve to control all three members of your party. You will occasionally need to jump into air and soar into sequences of notes, while ensuring those on the ground aren’t distracted from dispatching the oncoming swarms of Heartless.

Stages are split into three categories – Field, Boss and Memory. Field is easily the most common, taking up the majority of Melody of Memory’s campaign as you travel across worlds reliving the events of each game. In these, you automatically run forward with a trio of characters tackling notes to the rhythm. The majority of worlds consist of two of three tracks, each of which have objectives you’ll need to complete in order to progress the story.

They’re never too intimidating, and I only ever found myself replaying songs once or twice in order to progress. Memory Stages are longer affairs, and are unlocked throughout the campaign as a generous reward, or you can craft them yourself. These stages include full renditions of Simple and Clean, Sanctuary and other classic vocal tracks from across the series, and I love them so, so much. It’s possible I haven’t unlocked it yet, but versions of these songs with Japanese vocals would have been the cherry on top. 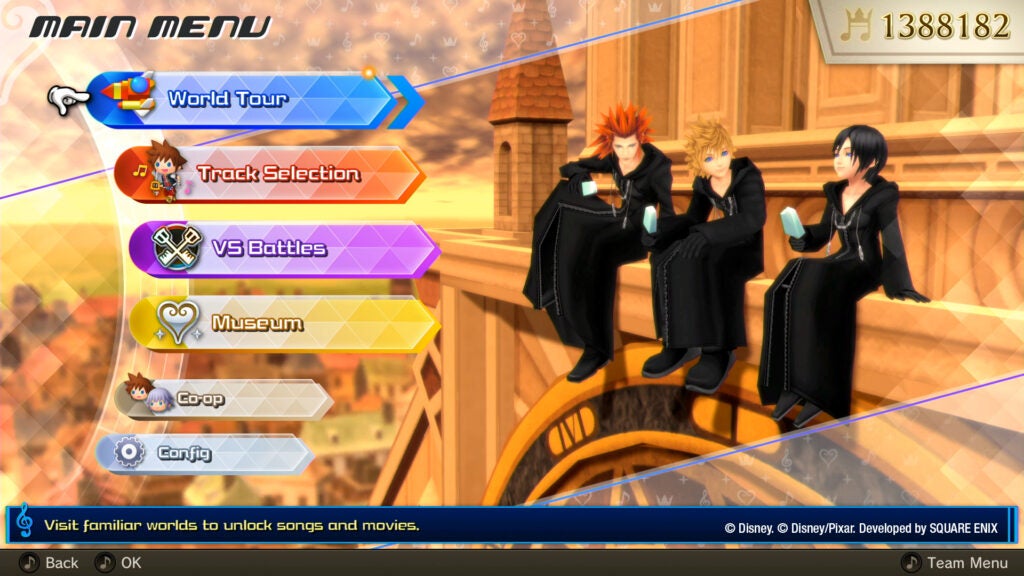 Boss battles are the weakest of the bunch, with the layout making it hard to both read the oncoming notes and focus on whatever action is taking place behind them. Fortunately, these stages are few and far between, often landing at the end of each campaign milestone. Because of this, it was easy enough to push through them and never look back. That is, until the completionist in me awakened and I needed all the bonus objectives.

Characters gain experience with each passing stage, resulting in a greater variety of spells to use alongside decent health points. The former is honestly an aesthetic difference more than anything, but it provides each level with a greater sense of scripted spectacle. You will unlock new parties of heroes throughout Melody of Memory.

They hail from Birth By Sleep, 358/2 Days and other classic entries, and it’s beautiful to take control of them while enjoying their respective tracks. Little RPG elements like this serve to give Melody of Memory a finer level of substance, making it feel like your team is growing alongside you when chasing high scores and collectibles. Speaking of, this is a game filled to the brim with things to unlock. 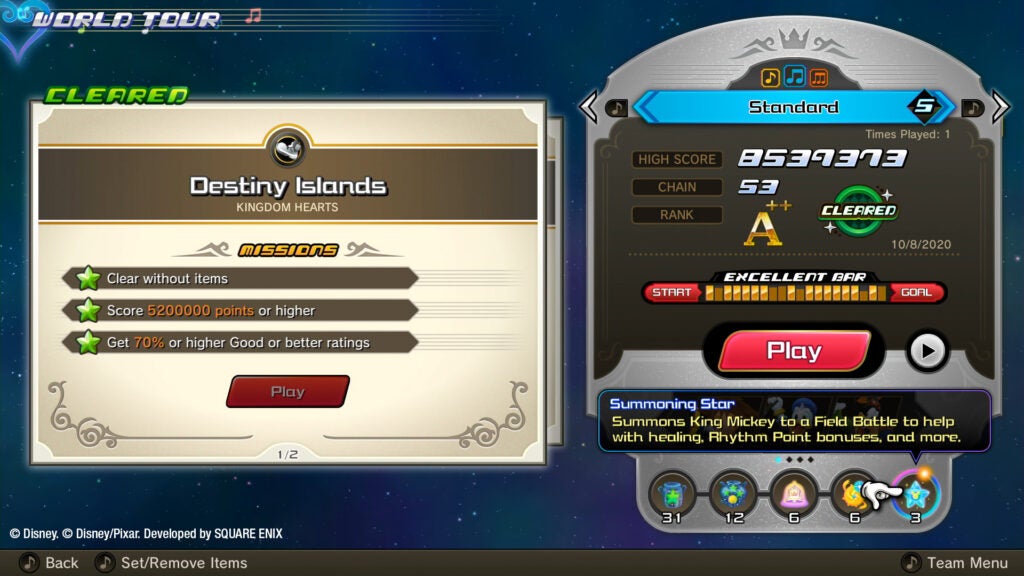 Completing songs will reward you with character cards, story artwork, bonus stages and more – with many of the aforementioned goodies also having their one tiered rarities with multiple versions to earn. I was smitten by this, and as a hardcore follower of all things Kingdom Hearts, was desperate to unlock every single one. The short and sweet nature of most songs alongside the rewarding nature of their difficulty means that hours will pass by in mere moments, which is an accolade I can only reward to the genre’s brightest sparks.

Kingdom Hearts: Melody of Memory is an excellent rhythm game, and a worthy homage to the unique series it belongs to. While its core gameplay is simplistic, the mounting challenge and sheer amount of content on offer helped to mitigate most complaints I could muster.

As someone who has held this series dear since they were a child, this proved to be an enthralling trip down memory lane while also doubling as a daring glimpse into the franchise’s future. If you have even a slither of nostalgia for Kingdom Hearts, this is a toe-tapping journey worth taking.