Leaving things behind is a part of life. Old relationships and tattered material possessions are often forgotten as we’re swept up in where the world is taking us next. Forgotton Anne takes a more fantastical approach to such items. Here, an entirely new universe is reserved for things we choose to forget.

This outlandish premise is a springboard to an excellent narrative adventure, with characters and locations I won’t forget anytime soon. Even among an overwhelming slate of outstanding indie releases, this animated delight shouldn’t be missed. 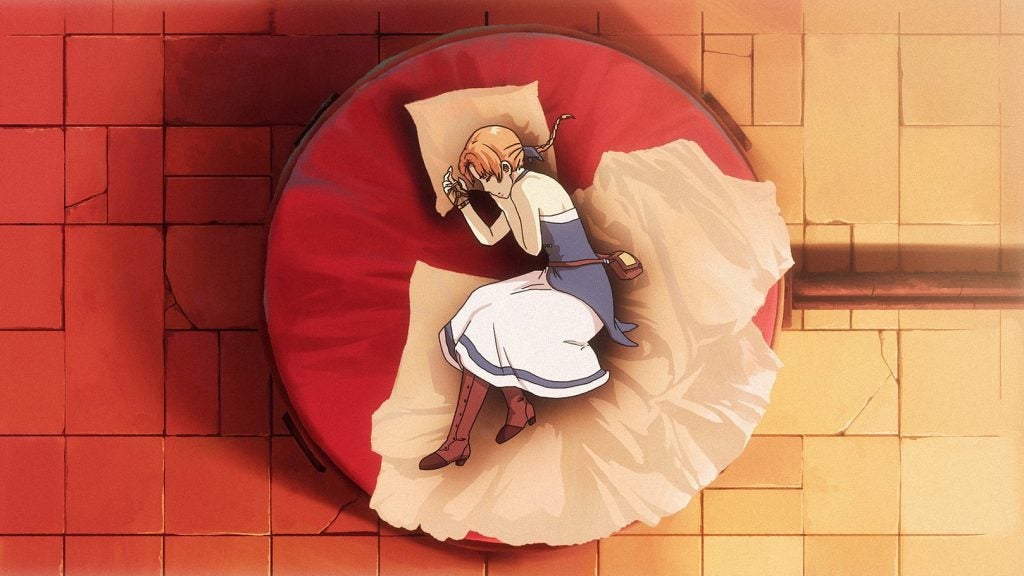 You are The Enforcer: a young woman who must keep order in a land filled with Forgotlings – previously inanimate objects who have since gained living consciousness. Ranging from scarfs to lamps to firearms, these items want nothing more but to cross the Ether Bridge and return to their owners. You’re the barrier between them and salvation, wielding a device known as the Arca that can crystallize Forgotlings into nothingness.

Such a power plays a big moral part in Forgotton Anne’s narrative, as you pick dialogue options to influence the outcome of events throughout your six-hour journey. It’s exquisitely done, so much so that I felt a tangible sense of guilt as the weight of decisions I first thought trivial became apparent. Anne is a fantastic heroine in her own right, too. She’s purposely mysterious with a backstory that emerges in triumphant ways.

Her place in this unusual society is never explicitly stated, leaving the player to discover its political ideologies and take a side themselves. For a concept that could easily fit into a children’s book, Forgotton Anne makes it serious and deliberate, without feeling melodramatic.

As the plot grew braver with each passing chapter, so too my respect for ThroughLine Games’ achievement. Being thrust into moral quandaries with only two possible decisions to make – which seldom felt black and white – had me tentatively committing to every small choice.

I adore how Forgotton Anne hints at a wider world outside of the claustrophobic zeitgeist in which it takes place. Teases of locations and landscapes, both political and literal, showcase the level of thought that went into this world – and it’s quite admirable. 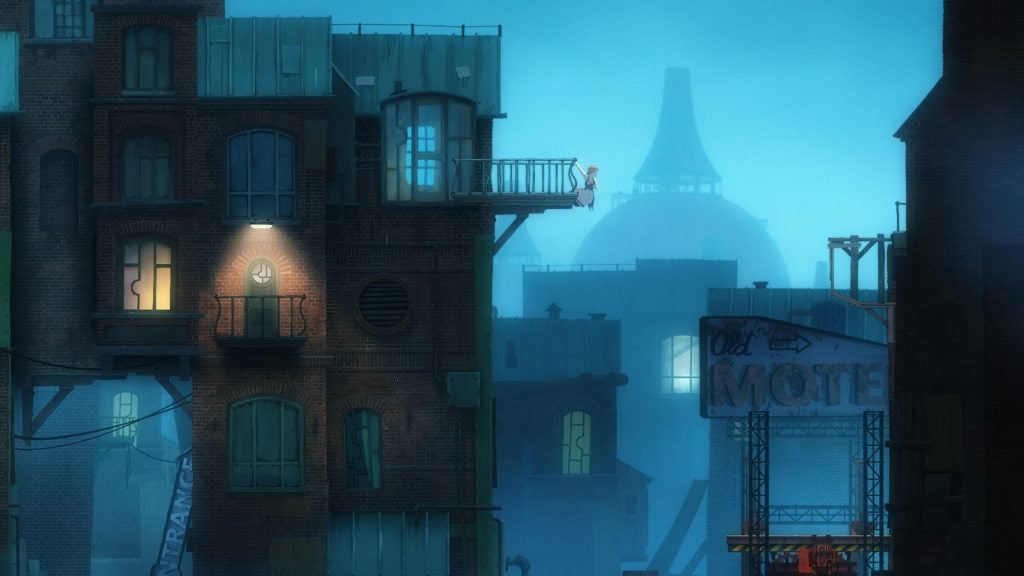 Played from a 2.5D perspective, Forgotton Anne is all about exploring this strange world and solving puzzles with the Arca Glove. Anne is capable of transferring a mysterious energy into a variety of objects. This can include generators to power switches and deciding the life or death of nearby Forgotlings. Later stages see the gauntlet stripped away from you, lending puzzles a small but noticeable bump of difficulty.

Anne moves with animatic grace across each landscape, launching herself up platforms and pulling switches to precariously answer riddles. Most obstacles are fairly simple, requiring a bit of quick thinking before the solution emerges. That’s fine, though. I never felt stumped to the point that the pacing was hindered as a result, meaning the narrative was free to progress as it saw fit.

There’s also a healthy dose of platforming, with Anne capable of pulling herself up ledges and launching across rooftops. It’s primitive until she discovers her wings, a pair of mechanical devices that propel her into the air. This mechanic really comes to life in a series of chase sequences that feel both satisfying to play and consequential to the narrative. While the controls can be a bit finicky at the times, I never found myself shouting at the screen in frustration.

You’ll gain allies later on in the adventure, who will help you solve puzzles with a bit of co-operative flair – even if it only involves pulling switches together or conversing through exposition as doors open to the next area. It would have been nice for some puzzles to possess a bit of extra complexity, as I breezed through most of them with no trouble at all. But much like Forgotton Anne’s platforming, it feels constructed to service the narrative above all else. 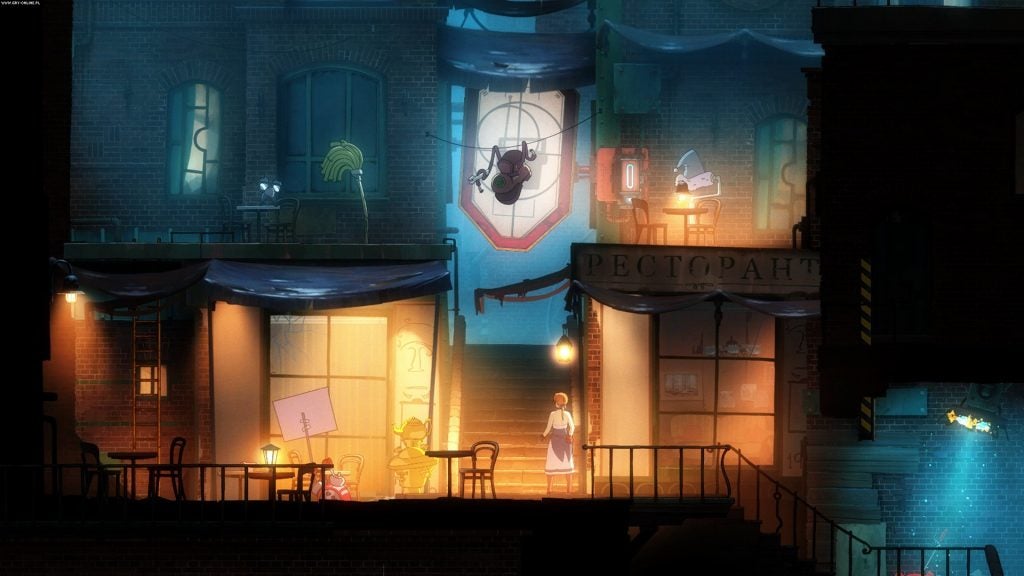 The real star of Forgotton Anne is, without a doubt, the enthralling animated world. Set in a mythical land drenched in rain and shrouded by fog, it resonates an aura of lonesome apathy devoid of life, with the exception of Forgotlings peppered about the place. Anne begins her story as a blunt young woman who cares little about these objects, but slowly comes to discover their depth, capable of emotion, memories and helping others.

How she grows as a character is determined by your decisions, many of which come back to bite you in some genuinely unexpected ways. It’s formulaic at times but resonated in ways that made me grin, cry and roar at the television. ThroughLine Games has created something that starts small and ends with a magnificent splash. Some moments aren’t executed perfectly and the voice acting isn’t the best, but for an indie effort, this is super-impressive.

It looks marvellous, oozing imagination from every seam with inspirations spanning across Studio Ghibli, Pixar and a slew of classic gaming greats. Every screen you scroll across is a visual delight, with minute details popping out as you revisit them.

One of my only complaints is that specific animations such as crawling through vents could use an extra frame or two, as they look unusually robotic among the otherwise buttery-smooth movement. 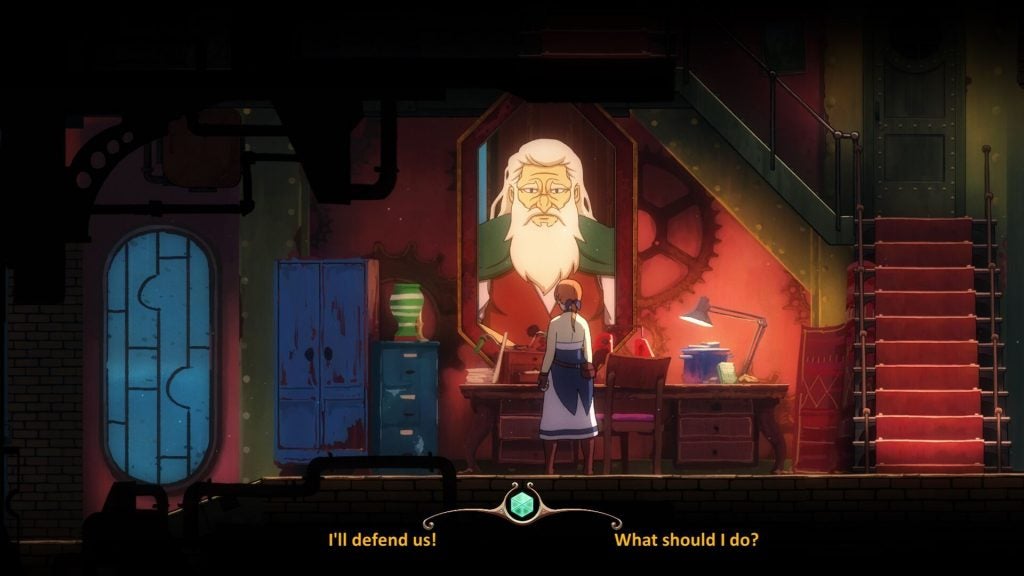 Forgotton Anne is a fantastic narrative journey propelled by an exceptional heroine. The Enforcer is strong, capable and shrouded in mystery; a case you slowly uncover while discovering who she is and where she came from.

This culminates in an emotional climax, where the player’s judgment really matters. A finely tuned cast of characters and small snapshots of a wider world give Forgotton Anne the foundations to feel spectacularly grand. As far as 2D adventures go, this is one of the best I’ve played in years.