For Honor is punishing. Jump into a one-on-one duel online or against an AI bot set above the normal level and you’re going to get beaten. If you’re lucky you’ll just get perhaps pummelled until you hit the ground, but face a particularly brutal foe and you might end up with your back being broken in two under the weight of an enormous club. You’ll desperately want to become the one doing the damage.

Go into Ubisoft’s medieval weapon-based brawler thinking you’re getting a kind of God of War with Knights, Vikings and Samurai warriors and you’ll swiftly be on the end of a battle axe to the face. Ubisoft Montreal has created a nuanced, patient and rewarding fighting game that will take a lot of learning. Accept For Honor for what it is (and going on Beta test numbers a lot of people have) and you may find a new multiplayer obsession.

There’s no doubt that online play is where the focus is in For Honor. The complex battle mechanics, which use a shared set of basic commands across the Vikings, Knights and Samurai, with variations coming from the chosen character’s speed, abilities, weapons and combos, are ripe for expert-level play. To get there, however, you’ll need to put in a lot of practice. Thankfully Ubisoft has built a campaign (playable alone or with a friend) that teaches you how to play while feeling greater than a glorified tutorial.

After each level you’re given a breakdown detailing how you did and what you earned, which couldn’t be more like a post-game lobby if it tried. Any flow the campaigns could have had is completely lost, which is a shame, as what’s here is a step above moving from arena to arena fighting bots. Play areas are large, but this is a linear experience with wandering off the beaten path (albeit slightly) only rewarding you with some collectible items. 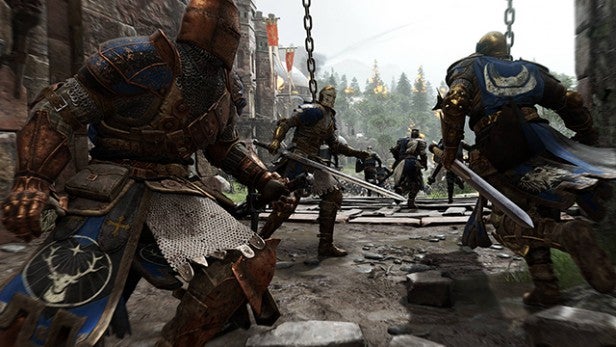 Level up and you’ll unlock feats (perks) that can be assigned to slots, activated in-game with a press of the D-pad (instant health is the first available and handy when learning) or used passively (such as an increase to attack strength or a health regen when not in combat). Over time you’ll get access to improved versions of each, but there is a surprising lack of customisation of your characters aside from these and some visual tweaks. There’s no skill tree or choice over what you unlock, whereas your online characters can be kitted out with new weapons and armour, and you can upgrade each, which once again makes the campaign seem like the lesser of the modes.

There are some cool moments as you slash your way through waves of enemies and storm into settlements, propel makeshift ramps onto enemy structures or fight on cracking ice, but nothing that will really ‘wow’ you the way you might expect from a campaign. The most interesting moments come in the one-against-one face offs, your skills learnt to that point being put to the test. A properly great campaign appears to have been possible, with For Honor doing a lot of things right, but in the end the focus was clearly on the long term appeal of competitive play.

At least players who tackle the campaign will enter the online arena a little more prepared. With a fighting system that uses an initially fiddly three-stance system – that governs offence and defence – parrying, defence breaks, combos, evasive rolls and more, For Honor isn’t a simple game. In fact, make sure you watch all the training videos and take on bots for a few hours before trying your luck against real people, or else you’ll be dead, then dead again, and again, etc.

Imagine the counter-based combat system in Assassin’s Creed, but if it had been designed by Capcom or Namco’s fighting teams. And they were told to really make the fighting seem authentic. To begin with you’ll want to button mash, because For Honor looks a bit like a game in which that tactic would work (play on the easiest setting and it’s possible but not recommended), yet this is a game about timed attacks and blocks, reading your opponents and knowing that you’re a hulking great warrior, not a nimble ninja. Combat here isn’t sluggish but it is deliberate. 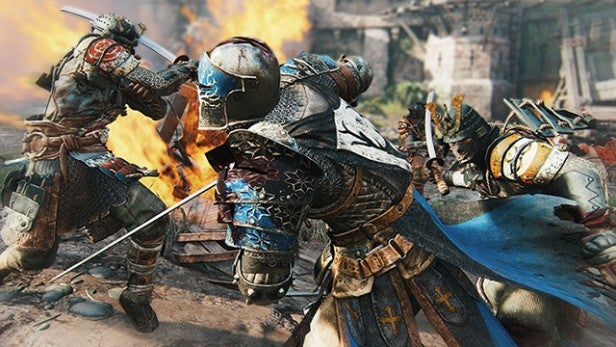 Fighting against a real person online has a different feel to taking on AI. There’s a level of unpredictability that you just can’t replicate in an offline encounter, meaning it’ll take some time to get your bearings. There’s also the threat of the arenas themselves to deal with, with a push over a ledge being all that’s necessary to end your opponent’s life (or have them end yours). Whether fighting as a team of four against four enemies in the points-based Dominion mode or classic Deathmatch modes, or taking on a player alone in a duel (or two versus two in a brawl), there’s plenty you need to be aware of.

For Honor’s online mode is built around an overarching seasons system, the three warring factions competing against each other to control ground. You can attack or defend territories by sending in war assets, earned through your performance during each online match. Faction Wars are made up of Territory Updates (which occur every six hours), Rounds (which last two weeks), and Seasons (which span 10 weeks). Essentially, the better you play the more help you can give to your faction, which in turn will mean it has a better chance of gaining territory.

Who controls what ground is determined at the end of each Territory Update, and maps inside each zone are updated visually to reflect the changes in power. Rewards of gear and cosmetic items are handed out to players after each Round and Season, with the quality determined by where your faction stands. Once a Season is over the entire game resets, although Ubisoft has said that the results will have a long term impact on the game – how that plays out won’t be known for a couple of months.

When playing multiplayer matches you can gain more XP and Steel by completing orders – tasks that are either set daily by the game or assigned from a list. Perform 10 honourable kills in Dominion matches, for example, and you’ll earn an extra 1,000 XP and 100 Steel. These orders cover online matches and fights against AI, so there’s something for everyone. Steel and Scavenge (collected items you no longer need can be converted) can be used to upgrade equipment. For Honor does include numerous optional microtransactions, covering Steel and Gear (you don’t know what you’re getting, kind of like FIFA Ultimate Team cards) – the effect this will have on the community remains to be seen. 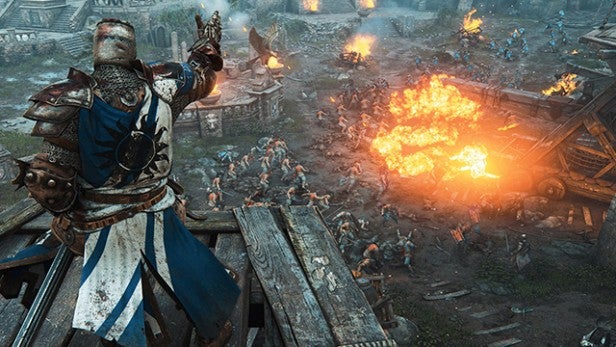 You’ll have your eyelids peeled back as you concentrate 100% on what your opponent is doing, making sure you accurately read the on-screen visual aids (the hardest difficulty actually turns all of this off), but look around and For Honor is an impressive looking game. Aside from a frame rate that’s only 30fps on consoles, there’s little to dislike, with big chunky character models, detailed environments and some awesome animations.

For Honor is a real surprise. In terms of gameplay mechanics it’s top-notch, visually it’s excellent, and there’s a decent if fairly formulaic campaign to play through. It’s in For Honor’s multifaceted multiplayer, however, where Ubisoft has has struck gold. Testing your combat knowledge against real players, either in one-on-one duels or in large conquest-style battles, is both thrilling and unique in the action genre.

Fighting-game fans looking for something new to become fanatical about will find enough depth here to foster a new obsession, while players who usually stick to thrill-a-minute action will appreciate the extreme tension of battle and rewarding gameplay mechanics. Ubisoft should have another online-focused hit on its hands.