Many gamers play FM while holding on to the faintest belief that they could make it in the real world of football management. Or at least command a coaching role. 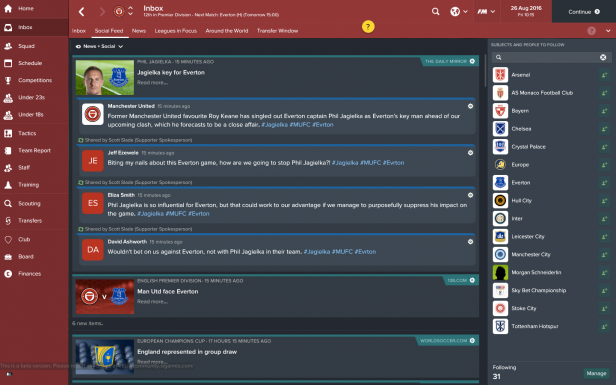 The first thing to flag with FM17 is that you’ll easily recognise it if you played FM16 – there really hasn’t been a huge overhaul of features that leaves you feeling like a total novice on first play.

Rather, FM17 is more evolution than revolution, adding a layer of small upgrades that continue to enhance football’s best simulation.

Everything feels a little more joined up, considered, and manual – it’s no longer a case of simply setting your side up tactically in the pre-season and leaving them to it.

One of the most noticeable elements of FM17 is the need to be tweaking and fine-tuning on almost game-by-game basis.

If you’re playing as one of football’s juggernauts, you probably won’t need to amend your gameplan for every fixture – but there’s still noticeably more benefit to extensive pre-match analysis and consideration. 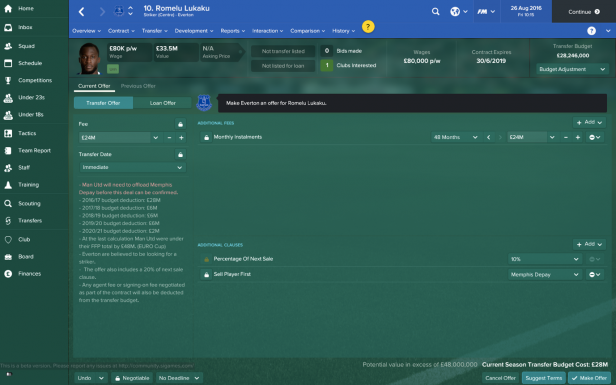 Of course, that won’t please anyone – FM17, like its most recent predecessors, is not a game you load up for a quick blast. But developer Sports Interactive has previously addressed this issue with the addition of the FM Classic mode, for more streamlined play.

The main game is a time-eater, and feels more extensive than ever before. Player Roles finally play a… role in FM17. It’s now abundantly clear that performance is reliant on effective deployment, both individually and collectively For instance, having your entire back four set to an attacking mentality spells trouble.

The coaching feedback screens have been streamlined – visually at least – and regularly relay more pertinent information. Ignore these at your peril, particularly when preparing for a game.

When you do click continue to the match, you’ll be treated to more eye-candy through an improved match engine that looks and plays better than last year. The whole presentation feels slicker, beginning with players filing out of the tunnel, lining up, or warming up in smaller groups.

Though the goal celebrations are still a bit out: watching five or six players running in a straight line, sporadically clapping above their heads, feels like a potential area for improvement.

That very slight niggle aside, watching matches on FM17 is better than ever before and but you still won’t believe you’re watching a real fixture. Player AI is vastly improved, with fewer erratic outbursts from your team.

The animations have clearly had an awful lot of work done to them, and the level of sophistication employed here shouldn’t be underestimated – the switch to a 3D match engine was one of the more controversial changes in the series’ history, but it has now been emphatically justified. And, of course, the referees’ magic spray has been added to the game, which fans of line-based regulations will enjoy. 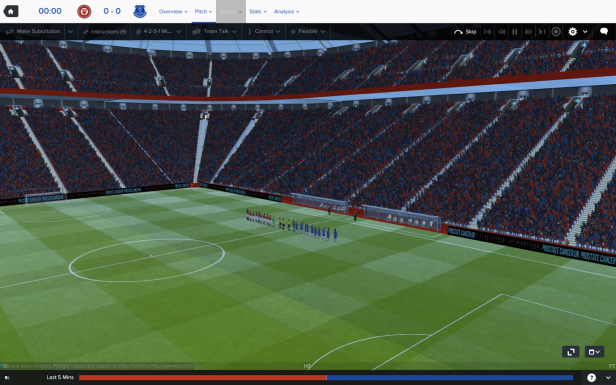 Creating a new manager profile has been revamped, with a multitude of choices available for how your coaching avatar can look, including the daunting option of creating a 3D model.

It’s a rather shallow feature that doesn’t add a lot, but it’s a bit of fun at the very least.

The other big addition this year was the arrival of a social feed as one of the tabs on the manager’s homepage. Clearly inspired by Twitter, it features fans reacting to news stories, rumours and club announcements.

At first, this feels pretty remarkable. There appears to be a whole other world within the FM universe, reacting to and engaging with what’s happening. Initially, it adds to the experience and, honestly, was something I took seriously: when fans objected to the transfer listing of a player, I considered reversing my decision.

However, the content pool here is clearly limited, at least compared to the vast number of actions you can have across even a single season – and the same messages start to repeat themselves.

Though a nice idea, these messages, for now, start to feel repetitive and superfluous. However, there are good uses of this tab, namely the flagging of stunning goals from across your FM world, and a more interactive way of keeping up-to-date with transfer targets.

I’m still unconvinced by the social feed in this version but can see how, with some extra depth to the content, it can become an interesting feature.

I can report better progress in my favourite part of the game – transfer negotiations. 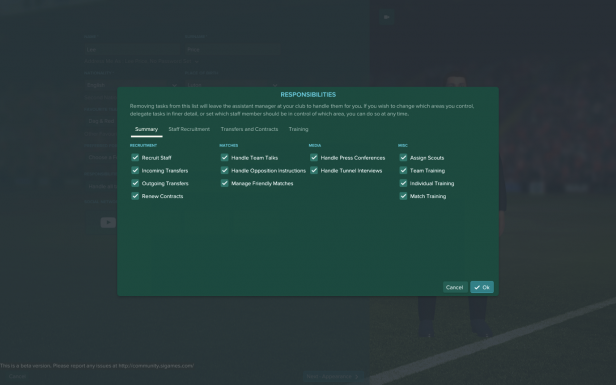 When tabling an offer to a club, you can offer a clause that stipulates that the deal will not complete until they’ve signed a replacement.

This is a good idea, and simply allows you to delay the deal for a week, for instance if you’re short of funds.

Similarly, you can request that the deal doesn’t go through until you’ve sold a specific player – perhaps the man you’re replacing. Once a fee has been agreed – in however many instalments you’ve managed to muster – you now have an additional hurdle to overcome before finalising a contract.

You now have to make promises to your potential signing. These range from the easy, such as a favoured shirt number or position, to the really rather difficult, like making them captain or allowing them to treat your club as a stepping stone.

Breaking these vows, even slightly, can cause prima-donna meltdowns, echoing the reality of modern football in an all-too-real way. Other new signings to FM17 include data analysts to your staff list, who can add some statistical expertise to various coaching feedback – like adding estimates of how many minutes a recovering player can muster to your physio report.

These number crunching geniuses will also provide post-match analysis of your side’s performance direct to your inbox, including the player culpable for the most mistakes, and your team’s heat map.

Finally, it feels that the wealth of information available in FM can have some coherent and easily accessible bearing on how you set your team up.

FM17 also marks a debut dive into politics for the series. No, you can’t run for MP, but the buzzword of the year, Brexit, has made a high profile impact on this iteration.

At a random point during your first few seasons, Britain will trigger Brexit, and that can have varying impacts on your game.

In one (admittedly very extreme) scenario, Scotland splits from the UK, and effectively becomes the new Premier League as English clubs struggle to retain talent and the financial dominance they currently enjoy over continental rivals.

The most common occurrence is of ‘soft’ Brexit, where things continue much as they are but the unfortunate percentage who encounter a ‘hard’ Brexit will suddenly find it much more difficult to land EU players who aren’t established internationals. This means that the Arsene Wenger method of sweeping the continent for wonderkids is redundant, and you’ve instead got to ‘Klopp’ it – i.e. develop what you have, and make do with midfielders flung in at full back.

If you’re not managing in England, then the impact of Brexit will still be noted – particularly if there’s an outpouring of talent from the UK. The Champions League will also see even lesser of a contribution from the British entrants.

FM16 was close to the complete game, and FM17 is a very definite leap forward. It’s not easy to improve on a near-perfect product but through smart and intuitive tweaks, this feels like the best iteration yet.