Available on Mac, Linux and Windows

Game franchises often get a bad rap for churning out yearly entries without making many changes. Football Manager is one such series, with the past few titles adding little to the overall game. The same really can’t be said for Football Manager 2018, however, which packs a heap of tweaks, completely new features and a tinkered UI.

All these tweaks make an already deep game even deeper; FM remains the ultimate way to waste time. But, in my opinion, the additions to management life come at the detriment to others areas of the game. 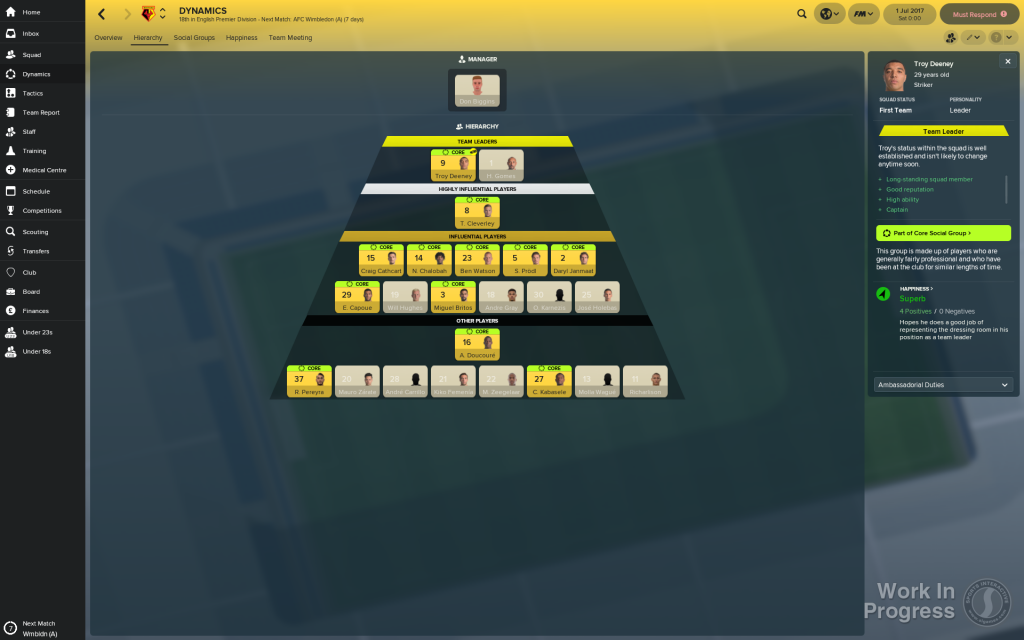 Of all the new features Sports Interactive has added in Football Manager 2018, Dynamics is the one that instantly stands out.

This is a new way to gauge the happiness of your squad. And, for the first time, there’s now a hierarchy within your team. Your captain, players who command respect, and other big personalities will sit at the top; everyone else comes below them.

The above is laid out visually – and it’s interesting, although predictable, to see who sits where. The thing is, I didn’t really find it made any difference to how my team played.

Take Tottenham, for example. Hugo Lloris sat as one of the most influential players in my team, yet I sold him and it didn’t really affect the team’s happiness. I actually found that in the previous FM games players became far more annoyed with me for selling high-profile players. There are also now visible friendship groups, so you can see who gets on well within a team and who feels left out. Sign a player who isn’t the same nationality as the rest of the team and you’ll likely see him sit at the bottom for a while. As is the case with the hierarchy tree, this is an interesting addition that I’m sure will be developed in further years. However, it just doesn’t have much of an effect right now.

But, the reason that people keep buying and playing Football Manager is for the deep tactical and scouting engines. The add-on features simply melt into the background when you really start to mess with training schedules, scouting regimes and how you want your team to play.

Working out tactics is a big part of FM, and there have been a few well-chosen changes this year. You can now have a short pre-match meeting with your players – perfect if you want to try something different for an important game. You can also finally dive deeper into player instructions – a feature I always felt was wasted before – and you have more control over exactly what a player does during a match.

Scouting has seen an overhaul too, and you can now decide how much you want to invest in your scouts. These are available in packages, but spend a lot and you’ll see your transfer budget decrease.

It’s also now possible to get a much deeper scout report about how a player will fare, with a score out of 100 rather than stars out of five. Plus, agents trying to flog their players will also pop up in your newsfeed during busy points of the transfer window.

It’s easy to spend hours just hunting for that new wonderkid – and the improved scouting engine really comes into its own here. What I did notice was that if you’re managing a team with a decent budget – pretty much any Premier League team, for instance – then just choose the highest package from the outset, because the loss to your overall balance and transfer budget won’t be altered too much. 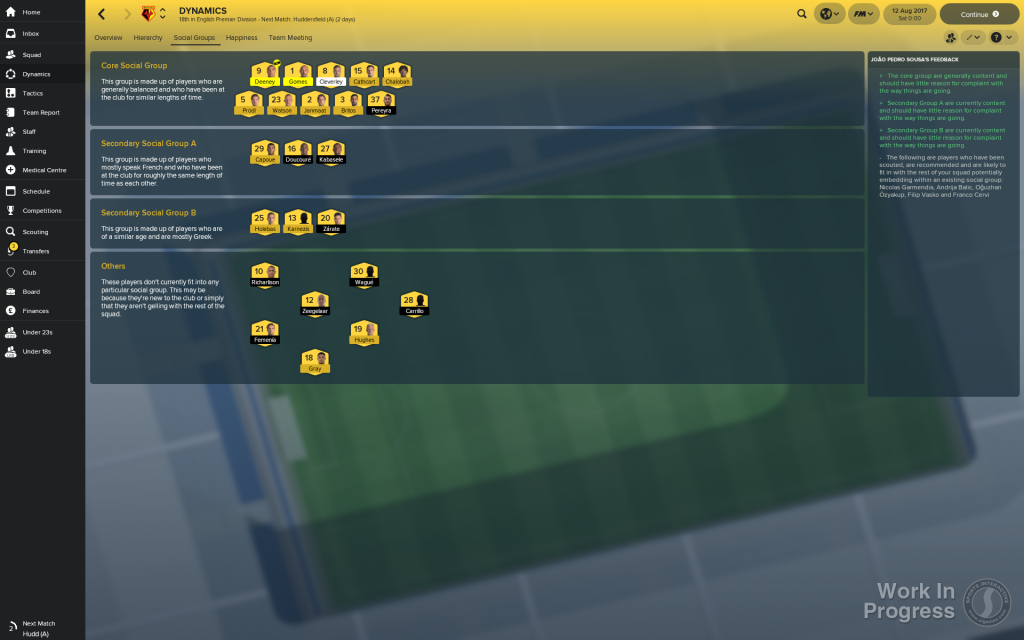 To mirror the ballooning amount of money in football these days, transfer values and fees have grown massively in FM 2018. Adrien Silva, a recent signing for Leicester City, only cost the Foxes £20 million, but his value is already nearing £50 million.

Buying renowned and experienced top-flight players is difficult this year, even if you start off with a big budget, simply because teams just demand so much more. Does this make it as fun as previous games? Arguably not, but it’s these true-to-life touches that really make Football Manager what it is.

The Football Manager interface is tweaked slightly every year, and every year I feel it becomes slightly worse for it. This is a side-effect of having to make space for the all the new features, but I still think the UI could be cleaner. Players new to FM will become swamped by the huge number of sections, options, menus and text – but even someone who’s played the game for years will still get lost on occasion.

There are some decent improvements, though, especially in the whole matchday experience. You’ll now get heatmaps of players’ movements throughout the game, and better analysis from your assistant. You’ll even get a quick overview of the half with some good, and bad, things that have happened and ways to improve.

Sports Interactive claims the 3D match engine has been improved, but aside from some extra animations, it remains one of the weakest parts of the game. I still don’t really think that FM needs a stunning-looking engine, but because so much focus is put on 3D elements, it’s hard to ignore it.

Take the new TV-styled intros. These look great on FIFA 2018, but not here. I’d have preferred them to be left out completely. You’ll also have to live with the awful faux-Twitter social feed that brings up the same inane comments from fans every single time.

Football Manager 2018 is a great game, but that’s mostly down to the sheer depth of the series on offer from previous years. A few new features here are fun as ideas, but I’d like them to have a more meaningful impact in-game.

Still, after putting nearly 50 hours into FM 2018, I can’t see myself stopping anytime soon. The sheer number of things that you can do make it ridiculously addictive – and one of the best value games around. Just make sure you know what you’re getting yourself into first.