When it comes to 3D performance, the 55UT3EC320S-T performs reasonably in some areas. Detail levels are decent, colours are surprisingly credible and brightness levels are strong. However, it’s ultimately rendered a little uncomfortable to watch for extended periods by quite strong amounts of crosstalk ghosting noise and a slight “twitchy” look to motion reproduction.

The need for the screen to be driven hard to counter the dimming effect of the shuttering glasses also means that backlight clouding along the bottom edge of the screen is more evident in dark 3D scenes than in 2D.

The 55UT3EC320S-T is a slightly better audio performer than expected. There’s no sign of distortion from the speakers, even when the set is running at high volume. Plus, there’s a surprisingly effective sense of width to the soundstage, which doesn’t lose cohesion even during action scenes.

Treble detailing is reasonably clean and precise without suffering harshness, and there’s just enough bass response around to stop the soundstage appearing too compressed or thin. 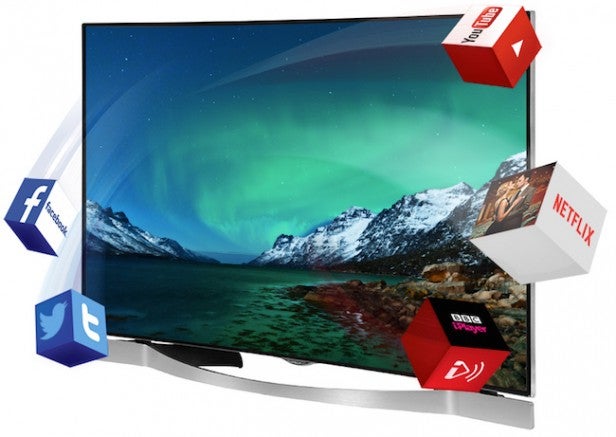 However, there isn’t enough dynamism in the speaker system to deliver a real sense of expansion in transitions from normal to action scenes, and voices can sometimes sound artificial and detached from the rest of the soundstage. We also detected a few lip-synch errors when watching Blu-rays, where actors’ mouths move slightly out of time with the audio track.

Those interested in gaming on a 55UT3EC320S-T will be happy to know that we measured its input lag – the time it takes to “draw” pictures received at its inputs – at around 70ms.

This isn’t a great result – it’s roughly double the lag time of most LCD TVs, and nearly seven times as much lag time as you get with the very best TVs. This means you may well struggle when playing games where reaction-speeds are important.

I also had a few problems during our tests with getting the 55UT3EC320S-T to recognise our 50Hz/60Hz 4K demo material over HDMI, sometimes having to switch the TV off and on again before the video finally popped into view. Even worse, we couldn’t get the TV to change to a different source when watching native 50Hz 4K unless we switched off the 4K source first!

This all suggests that Finlux’s firmware is barely ready for the challenges presented by the arrival of 4K.

I also didn’t like the remote control. It’s plasticky, its buttons don’t give a very tactile response to presses, and the “ring within a square” layout of the main navigation and volume/programme change buttons is quite fiddly – especially as the raised navigation circle feels quite loose and imprecise.

This is tricky to answer. While its £899 price tag is eye-catching for such a large, curved 4K UHD TV, the price does come with a few performance and feature strings attached. So much so that, in my opinion, you’d probably be better sacrificing five inches of screen size for the 50in Panasonic 50CX700 instead. This flat-screen TV offers markedly better picture quality and 4K streaming support for around the same money.

If you’re really intent on having a curved TV then the 55UT3EC320S-T offers unbeatable value. However, we’d personally question the value of having a curved screen on a set smaller than a 65in model

With the 55UT3EC320S-T, Finlux has made a solid attempt to introduce more value to the 4K UHD TV market. However, the lack of 4K streaming support is disappointing – and we consider that a cheaper, flat 4K screen would make for a more convincing bargain.