Available on Nintendo Switch
After months of feverish anticipation, the Nintendo Switch has finally arrived. With over 80,000 eager UK gamers snapping up the system at launch, much of the gaming world has been drawn in by the intoxicating allure of a shiny new Zelda and even shinier new hardware to play it on. But beyond Breath of the Wild, the Switch’s anemic retail game lineup has many early adopters yearning for more. Thank Goomba for the eShop, then.

While Switch’s software presence on stores shelves is woefully lacking, there are some solid indie options on its online storefront. Leading the digital charge is Shin’en’s relentless futuristic racer, Fast RMX. A remaster of 2015’s little-known Fast Neo Racing for Wii U, this new edition gives the game a fresh coat of paint, adding a handful of additional content while bringing the original’s blisteringly-paced racing to Nintendo’s new platform.

Unashamedly inspired by the likes of Wipeout and Nintendo’s own F-Zero, Shin’en’s maiden Switch release brings a welcome dose of arcadey-fun to the console. Taking full advantage of the considerably more powerful hardware, Shin’en has given the murky visuals of the Wii U original a new burst of life. Rendered at full 1080p while docked and 720p on the Switch itself, Fast RMX’s shiny courses not only look great, but also manages to run at a steady sixty frames per second regardless of how it’s played.

Related: 11 Nintendo Switch problems and how to fix them 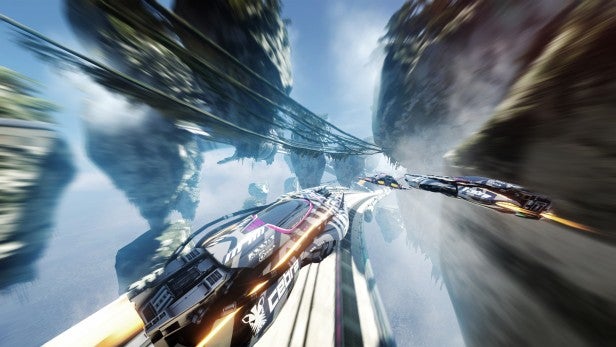 If the name wasn’t enough of a clue, this isn’t a racer for the faint-hearted. Sending you hurtling down ever-changing courses at breakneck speeds, Fast RMX bombards your retinas with information and demands that players have the reflexes to keep track. While boosting around futuristic racecourses to a thumping drum and bass soundtrack is nothing new, a unique phase-shifting mechanic helps keep things interesting. A tap of X changes your ship’s phase from either orange to blue, requiring players to quickly shift colour to match corresponding boost strips and jump pads.

The game’s main mode – Championship – features three different leagues: Subsonic, Supersonic and Hypersonic. Initially, most players will breeze through the game’s early stages on Subsonic, unlocking an additional cup and vehicle with each podium finish. But it’s not long before RMX ramps things up a notch thanks to its tough AI. As you approach the last few cups in Subsonic, the difficulty increases tremendously. Fast’s once simplistic tracks soon start introducing stage hazards – everything from giant walking spider-bots to hidden pyro. With competing pilots often boosting you straight into a hazard or hurtling into you just in time to knock you off the track, even on the game’s ‘novice’ league, Fast RMX presents a considerable challenge.

Featuring over 30 different tracks to tear up, 15 different vehicles to master and the ridiculous ‘Hero Mode’, there’s a pretty generous amount of content on offer too, making it perfect to play on the go. As much as I love making my way through Hyrule’s stunning expanses, Fast RMX is the perfect commuter-friendly Switch game. With the game’s brightly coloured and highly detailed circuits looking fit to burst out of the Switch’s 6.2-inch screen, putting in a pair of headphones and plowing through a few cups feels great on the tube. Thanks to its shorter and more linear nature, a bout of Fast on the go means you’re less likely to miss your stop, too. 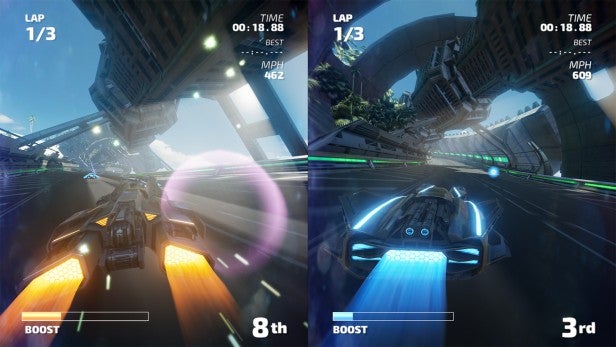 Unsurprisingly, multiplayer is another area where Fast excels. While getting the most out of 1-2-Switch requires a handful of friends and a healthy amount of Dutch courage, Fast is one of the Switch’s most immediately enjoyable multiplayer experiences. Supporting up to four players split-screen, eight players for online races, and local play across eight different Switch consoles, Shin’en give you an almost overwhelming amount of different ways to humiliate your friends.

Anyone hoping for current-gen-quality online multiplayer, however, is going to be left feeling pretty disappointed. While network races just about work, at the moment they’re as barebones as it gets. Without a proper lobby anywhere in sight, players are plunged almost immediately into a map selection screen. Once the track has been chosen, it’s business as usual. Like in Mario Kart 8 on the Wii U, other players are identifiable on the racetrack thanks to a Nintendo Account name and their chosen icon floating above them. As expected, there’s no form of communication whatsoever once you’re in the game, with even pre-made responses failing to make the cut.

Although this should result in some fun (if basic) online racing, every event I hop into has been plagued with connection issues. While I’ve never had any lag that affects driving directly, each race has struggled to keep up with the other player’s movements, showing opponents’ vehicles teleporting around the track out of nowhere, or simply traveling in a janky, robotic fashion. Whether this is just a temporary game-specific issue or a symptom of a bigger Nintendo server problem remains to be seen, but either way, it’s a far cry from the online experience gamers expect in 2017.

Thankfully then, local multiplayer fares much better. With Fast RMX requiring more complex controls than the likes of Snipperclips and Bomberman, I was skeptical as to whether it would even be playable without using the controller grip. To my surprise, Fast RMX’s button-heavy racing feels great using a single Joycon, allowing me to serve up several hours of racetrack beatdowns without feeling like I’d contracted arthritis. 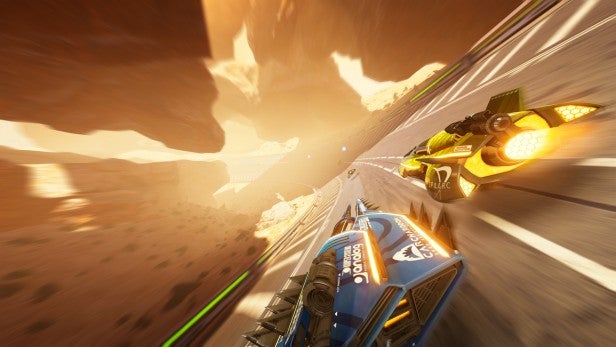 Impressively, for such a busy-looking game, racing in Tabletop mode also works surprisingly well. Taking the Switch with me to a party, Fast RMX’s splitscreen racing managed to be perceived by even the most alcohol-glazed eyeballs. It’s moments like this that show why the futuristic racer is such a brilliant launch title for Switch – it simply works perfectly in every configuration that the Transformer-like hybrid demands.

While Fast RMX isn’t exactly the only launch title to offer traditional multiplayer fun, this £16.99 racer shows Super Bomberman R’s £49.99 price tag for the daylight robbery that it is. With free updates coming, including a Time Attack Mode and online options that will allow you to play with friends, this is a game where you’re certainly getting your money’s worth.

While Zelda is undeniably the Switch’s killer app, Fast RMX drifts into a close second place. Offering an impressive range of multiplayer support and commuter-friendly racing on the go, Fast’s futuristic thrill ride manages to feel more at home on the Switch than it ever did on Wii U.

The lack of a discount for owners of the original is disappointing, but thanks to a hefty visual upgrade, new content and refined gameplay, it manages to feel worthy of a second purchase. Lacking online component aside, Fast RMX is a game that succeeds on almost every front. For those looking for a more serious racer to sink their teeth into before Mario Kart 8 Deluxe – or simply just some brilliant multiplayer for their shiny new console – for £16.99, you can’t really go wrong with Fast RMX.