What you get out of Fallout 4’s latest DLC pack, Wasteland Workshop, will be heavily influenced by how much you enjoyed the settlement building of the base game, with this add-on bolstering the game with a host of new building options.

You need to be prepared, too, because you still need to scavenge materials to begin building the new objects. While this is expected, the DLC would benefit from being bundled with a bunch of building materials for your settlements so you can get stuck right in.

For now, you’ll have to head back into the wasteland, unless you’ve been hoarding items as if there’s another nuclear war coming. I’m just glad I tested Wasteland Workshop on PC, where I could take advantage of console commands to expedite my acquisition of the required goods. 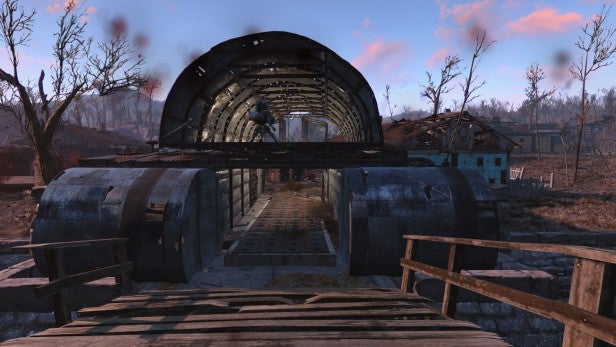 There’s something strangely gripping about cleaning up the wasteland, breaking down items into their components and altering your surroundings – but you’ll be considering buying the DLC for the new stuff. So, what exactly do you get in Wasteland Workshop? Its main draw is the ability to capture animals and raiders, which you can then pit against each other in a battle to the death in a makeshift arena. So that’s the first thing I did.

Construction begins with two platforms: one for the red team and one for the blue team. These let you assign your settlers to a team and force them to battle. I constructed my arena in Sanctuary, using the two derelict house foundations as bases. The platforms were enclosed by wooden walls and blocked off by a powered door – this way, my two fighters wouldn’t kick off prematurely. I then built the main arena around that, which could be entered only through a second powered door at the center.

Some steps were built and a viewing platform was knocked together, a generator placed on top to control the doors. I assigned Preston Garvey to one platform and another unarmed settler to the other, only to watch aghast as they both walked around the back of the arena where there was no door.

I decided to use a bed to wait an hour, giving them chance to sort out their pathfinding woes, but on my return I found the settler was dead, Preston Garvey standing over his corpse. I guess that’s what happens when I’m not about to shut the doors, but I wasn’t going to watch Garvey walk into a shopping trolley in the river for five minutes. It was time to try another tactic, but first I wanted to use some of the new buildable objects to make the arena fit for a grand battle. 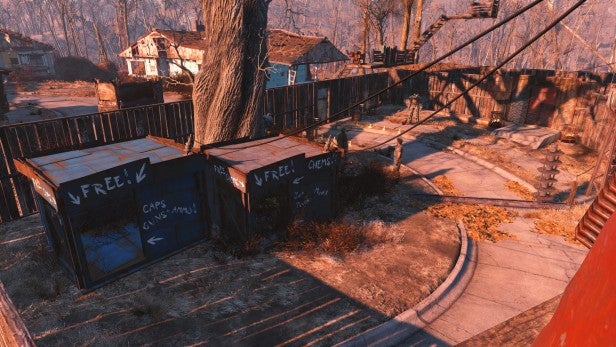 Step one was to erect a high concrete wall (a new material) and add some neon lettering to it. Branding is important. Step two saw me fill the arena with traps – the new buzz saw strafed the middle of the arena, while flamethrowers kept the contestants away from the doors. I then constructed some cages, to capture animals and raiders to take part in my new bloodsport. I built one to capture a member of the gunners, lured by bottlecaps, and another – filled with narcotics – to grab me a Raider.

After hooking it all up to one of the huge new generators, the neon glow from may makeshift sign signalled the grand opening of TrustedReviews Fight Club.

Whatever cages you choose, you need to wait for your prey to take the bait. I wandered around Sanctuary for a few hours, placing the new decorative taxidermy heads around my settlers’ houses and rigging every route into my town with spike traps and razor death. I checked my cages. Nothing. I slept for 48 hours before I finally had a gunner imprisoned in my macabre stadium. It was time.

With Preston Garvey back on his podium and a gunner in the cage, it was simply a case of releasing the door locks, letting them both out and then shutting them again. I had the generator up on my viewing platform, so I flipped the switch and watched them both run out. 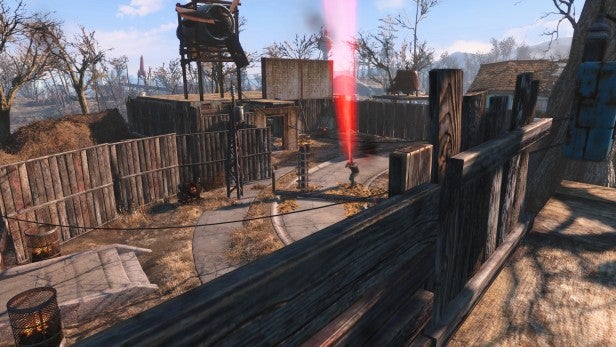 Except that both didn’t. The gunner did. He ran out and looked straight up, straight to me crouched high above, and fired a red hot laser right at my face. Garvey, meanwhile, was running into the corner of the wall, presumably attempting to phase through and assist me. In fact, the whole of Sanctuary was doing the same, running at the edge of the arena from the outside trying to get this hostile who was slowly melting their saviour’s face with an energy weapon.

I soon succumbed to his attacks. My limp body fell from my perch and into the arena, right on top of the buzz saw in its middle, causing my corpse to twitch before the screen faded to black.

While Wasteland Workshop provided me with a few hours of building fun, Fallout 4’s AI just isn’t smart enough to cater to these arena showdowns. No doubt the DLC was inspired by the popularity of various YouTubers showing off epic battles between different AI factions, but there haven’t been any tweaks to the underlying systems to make it work to a decent standard.

Although entertaining at times, Wasteland Workshop is a bit of a mess. It feels like something that perhaps could have been offered as a free update – particularly since there are plenty of free mods out there that add tons of settlement building options already. This DLC is only for those consumed by Fallout 4’s construction; otherwise, it feels like a needless addition.