Available on Xbox One, PS4, PC
Is F1 2015 the latest sign of a real racing renaissance? We’d like to think so. With DIRT Rally, GRID Autosports and now this, the Codemasters Racing team seem to have turned their back on the dark days of extreme sports celebrities and novelty game modes to focus all their attention on the thrills, spills and skills of driving really fast around a track. Nor is Codemasters alone. Both Project Cars and Assetto Corsa have shared a similar, racing-focused vibe, and picked up fans who felt disenfranchised by the drifts, stunts and firework finishes of the last-generation racers.

In F1 2015 this movement makes itself felt in a stripped-back structure that has no time for clever historical re-enactments, arcade game modes or snack-sized challenge modes. Instead, it’s all about straight recreations of the 2014 and 2015 Championships, with the only alternatives a quick race mode, online multiplayer and a fiendishly addictive time trial mode. 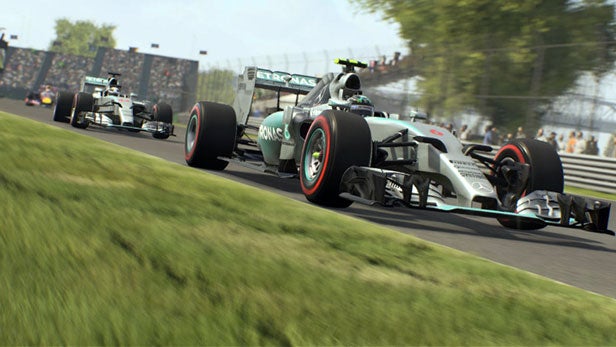 What’s more, those championships reflect the reality of F1 racing. The most hardcore Pro Championship mode does each race weekend pretty much in full, complete with lengthy practice and qualifying sessions. Even the amateur level of the basic Championship mode expects you to go through a 15 minute practice, a single-lap qualifier and a 14 to 16-lap race, taking roughly one quarter of the time of the real deal. While accessible, enjoying F1 2015 takes a level of commitment.

If you’re used to more arcade-style console racers, this might come as a shock. A race weekend represents a good half hour or more of effort, while the race itself takes a certain level of focus and concentration. Yet the sheer length of the races almost forces you to think about strategy, tyre wear, fuel and the other drivers, which means you’re thinking more like an F1 racing driver. In fact, F1 2015 is one of the most immersive F1 racers we’ve ever played. 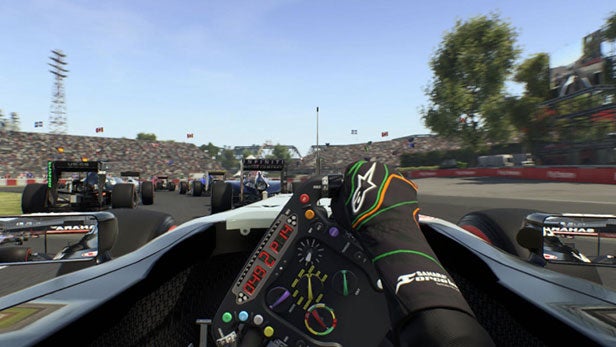 Some of this comes down to stuff that’s going on off the track. With no lengthy cut-scenes, create your own driver career modes or other distracting guff, you’re put squarely in the suit and helmet of a real-life F1 driver. And the game does its best to keep you there – even when you’re approving race strategies or tyre selections from a virtual tablet. There are miniature linking cut-scenes to celebrate success or indicate failure, but these are short and to the point, and helped by authentic suits, insignia, car decals and sponsor logos which make them feel like snapshots of pit-lane life.

Best of all, F1 2015 has a fantastic engineer commentary, with your sidekick in the puts giving you genuinely relevant info on the track, what’s happening on it, and what you might what to think about during the next part of the race. He’ll pick up titbits about how your rival contenders are doing, and he’ll even go to the extent of calling team-mates by their first name. 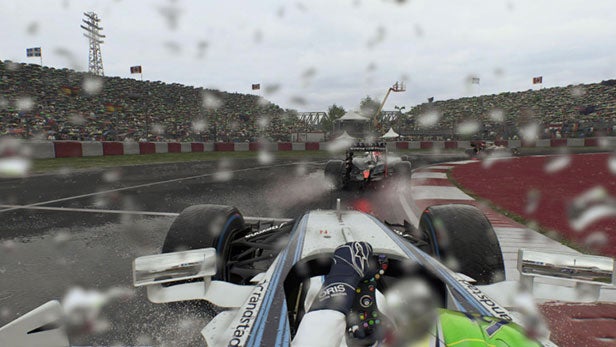 Yet there’s equally immersive stuff on the track. The default cockpit view is excellent and puts you right at the heart of the action, with settings and tyre changes for your next pit-stop accessible at a tap of the D-pad. The game’s weather effects don’t just look great; you can feel the effects on grip and traction. Everyone drives a little slower and more cautiously, and becomes more prone to making errors. You learn to think more about when and how you brake, and how you speed out of the corner.

The sound of the cars is fabulous, too, with powerful, gritty engine noises as the cars accelerate, and equally immersive effects for braking and gear changes. Plus, who can resist the roar of the crowd as you speed past a grandstand. 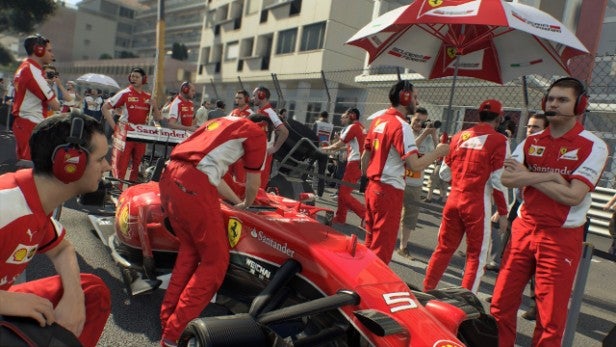 Yet all this plays second fiddle to the handling. It has the precision you’d expect from an F1 game, but also one of the best feels we’ve come across in an open wheel racer – not as wild or unforgiving as some, but happy to work you hard on each and every corner. Here it’s not just about braking, steering in then speeding out of the corner, but about the way you balance the brake, accelerator and the wheel to maintain grip and shave every second from your lap time.

Even playing on a standard Xbox One controller it’s a really rewarding and satisfying drive, and while there aren’t huge, fundamental differences between the cars and teams while racing – some of the performance deltas have been smoothed over to make the action a little less predictable – moving from Pastor Maldonado in the Lotus to Sebastian Vettel in the Ferrari has a genuine effect on how you drive, not to mention your chances of winning.

It doesn’t need to be difficult. While there are default difficulty settings, you can dial the AI up and down and switch assists in and out, with a particularly likable variation of the on-track guide which only shows up on the corners. What’s more, the game is realistic about your goals for the championship. If you race as Maldonado, it doesn’t expect you to win, only come in the top 7. Playing as Vettel? A top 4 position becomes your primary target. 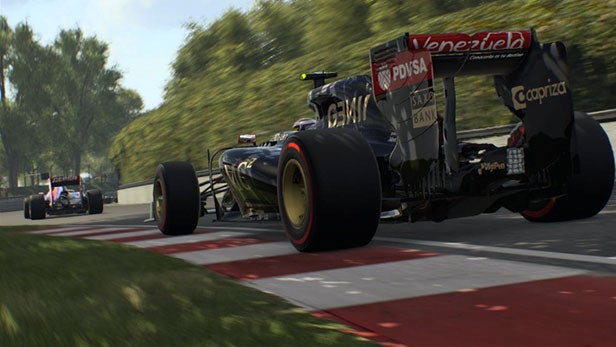 Graphics aren’t the game’s biggest strength. It does well on the modelling and lighting of the cars and on incidental track-side detail, but it’s no match for Project Cars or Forza Motorsports 5, and there’s something oddly fuzzy about the presentation – a least on the Xbox One version. We suspect the team focused on a smooth 60fps frame rate and the sense of speed, which is amazing, and we’d take that over extraneous eye-candy any day. This is still the best-looking F1 yet, even if it’s not the best-looking racer by any means.

That’s not necessarily a problem. What might be is the AI. Set to Easy it’s rather bland. Qualify in the top four and you’ll race ahead of the rest of the pack on the first lap and only need to worry about the opposition after pit-stops. Set it to Medium or above, though, and it’s surprisingly savage, rear-ending you, clipping you on corners and generally sending you spinning off the track. A day one patch appears to fix the worst offences, but not all of them, and there’s nothing more annoying than delivering a perfect performance through, say, the first ten laps, only to get whacked by Valtteri Bottas in the eleventh and sent spinning off the track. What’s more, the game has a nasty habit of penalising you for collisions even when you’re not to blame. 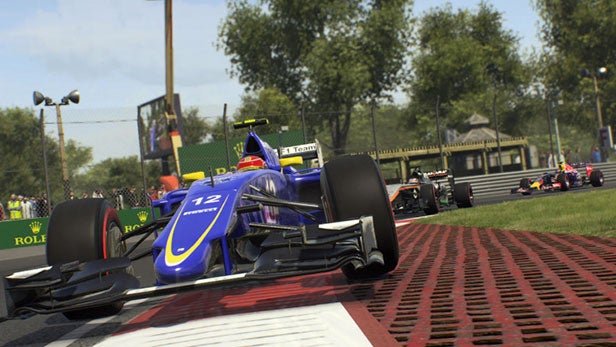 This might be a disaster, but F1’s saviour is its flashback feature – still one of the smartest ideas Codemasters ever put into a racing game. While disabled in the Pro Championship mode, it allows you to rewind time and kick back in before the accident occurred, sometimes losing you a little speed and a second of lap time, but saving you from having to repeat the last fifteen minutes of racing.

And what price you do pay is a small one for an F1 racer as exciting and fiercely addictive as this one. Even once you’ve worked your way through both championships – and we suspect you’ll want to do so more than once – you’ll find yourself putting hours into the time trials, working your way up the online leaderboard. It’s a slightly Spartan feature, with none of the social bits we’ve come to expect from next-gen racers, but weirdly compulsive all the same. 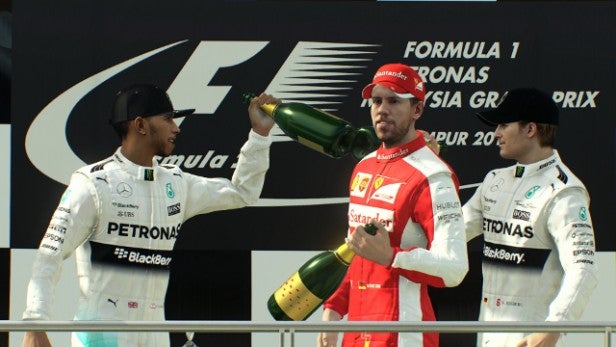 In case you’re wondering about Multiplayer, the feature was locked off on our console at the time of writing, but we’ll update this review as soon as we’ve had a chance to spend a decent amount of time online.

Some will look at F1 2015 and attack the paucity of content, but we’d rather see a game that got the core right than one that spread itself too thin and blew the fundamentals. Perhaps next year we could have the extra modes and options back, but if so this year’s model is a great chassis to bolt them onto.

Verdict
Short on modes, but big on racing, F1 2015 gives fans their most immersive F1 game to date. It could be stronger visually and the AI needs some work, but the first F1 to hit the next-gen consoles delivers both a thrilling drive and a strong core for future F1 games.