Having wrapped up the 2D section by saying that Epson has perhaps shifted its focus away from 3D and back to 2D, the Epson TW9200’s 3D performance is actually pretty impeccable. The main reason for this – or at any rate, the main way it outguns many rival 3D projectors – is its almost complete freedom from crosstalk ghosting noise. This makes it easier to lap up the full HD resolution of 3D Blu-rays, and to get more immersed in the action. After all, nothing throws you out of a 3D experience more than seeing double ghosting artefacts splurged across a 100-inch screen.

The TW9200’s ability to combine deep blacks with a really high level of brightness pays dividends with 3D too, helping 3D images look intense and contrasty despite the dimming effect of the glasses you’re wearing. The contrast additionally helps the TW9200 paint a very deep but believable 3D space with lots of well-rendered depth markers.

In fact, the only problem with the TW9200’s 3D playback isn’t related to its pictures. Rather it’s the fact that the lamp automatically shifts up to its Normal light output setting when 3D is detected, leading to a substantial increase in the projector’s running noise. And unfortunately you aren’t given the option to turn the lamp down to its eco mode. 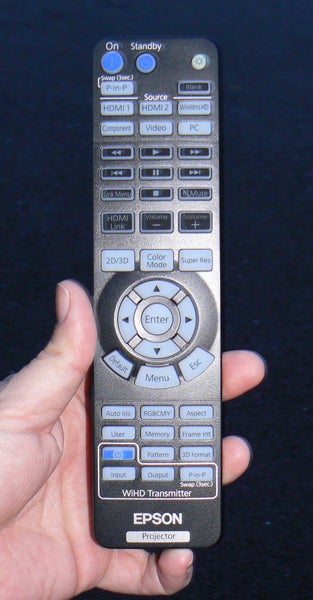 The remote control you get with the TW9200 is a mostly excellent effort. Its large size, large buttons and potent backlight all show a good understanding of what you really want from a remote you’re going to be using predominantly in a darkened room.

There are also an unusual amount of buttons that provide direct access to specific picture features, reducing the amount of time you have to spend in the projector’s onscreen menus.

Epson hasn’t fared particularly well with input lag on its home cinema projectors, and this trend continues with the TW9200. We measured 64ms of input lag during our tests, even using the Fast processing setting – a figure that’s appreciably higher than the sub-40ms we like to find if we’re to be sure a display won’t potentially have a slightly negative impact on our gaming performance.

If you still hold a flame for 3D then the answer here is a thumping yes, for its 3D performance is comfortably the best we’ve seen from a sub-£3,000 projector. We should add that the projector runs rather loudly in 3D mode, but then actually so do many of its rivals, including the JVC X35. The Sony HW55ES runs more quietly in 3D mode, but suffers more crosstalk than the Epson. As does the JVC, in fact.

In 2D mode the TW9200 is also a compelling proposition. The JVC X35 reaches deeper and more stable black levels, while the Sony HW55ES’s images are slightly more dynamic and clean, but the Epson looks brighter than the JVC and slightly more neutrally coloured than the Sony. So choosing between the three is more a matter of taste and room setup than a simple case of being able to say one is definitively better than another. Sorry!

Epson has surprised us with the TW9200 — in a good way. By delivering a substantial rather than merely incremental increase in contrast over its predecessors and seemingly improving the quality of its lens and image processing, it’s taken LCD projector picture quality to a new level.