What is the Sony VPL-HW55ES?

The £2,800 HW55ES is Sony’s new mid-range 3D projector, built around the brand’s proprietary SXRD technology. It doesn’t have a native 4K resolution like the Sony VW500ES, but this is hardly something to hold against it given its sub-£3,000 price, and actually all the signs are that the Sony HW55ES has what it takes to be a seriously accomplished HD performer. 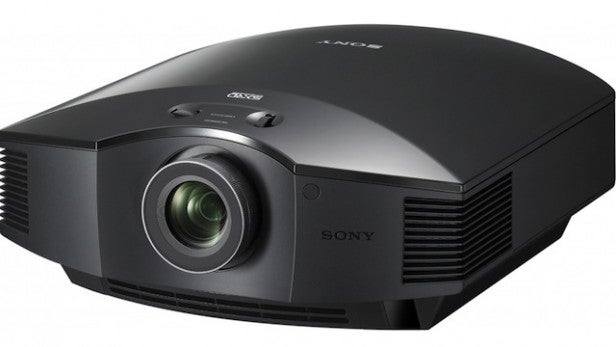 The HW55ES gives you plenty of hardware for your buck. Its chassis is wide, high and heavy, making it very much a projector aimed at permanent installation rather than a casual projector for carting round to friends’ houses or putting away in a cupboard when you’re not using it.

While large, though, the HW55ES certainly isn’t ugly. The arced, glossy top edge is stylish, and the large centrally mounted lens looks high quality enough to get our home cinema senses tingling. Sony has even thoughtfully made the HW55ES available in black or white versions to suit either your tastes or, more likely, the location in your room where the projector will be sited.

The only aspect of the HW55ES’s design we didn’t feel totally comfortable with is the siting of its connections down its side rather than on the rear, as this makes it more likely that you’ll notice cabling spilling from it once you’ve got it installed.

At least the connections are decently numerous. Two HDMIs will likely provide the main video routes for most users, though there are also component video and D-Sub PC ports, along with RS-232 and IR ports to help you integrate the projector into a wider home installation.

If the idea of hiding very long HDMI cable runs to the HW55ES doesn’t sound very appealing, then you can add an optional wireless HDMI system to the projector. Plus you can add an external 3D transmitter should you not feel happy with the IR one built into the projector’s chassis. Both IR and RF external transmitters are available, which is handy given our preference for the more stable, install friendly and widely compatible (in terms of the glasses you can use with it) RF route. That said, we didn’t experience any 3D signal drop outs during my tests with the integrated IR system. 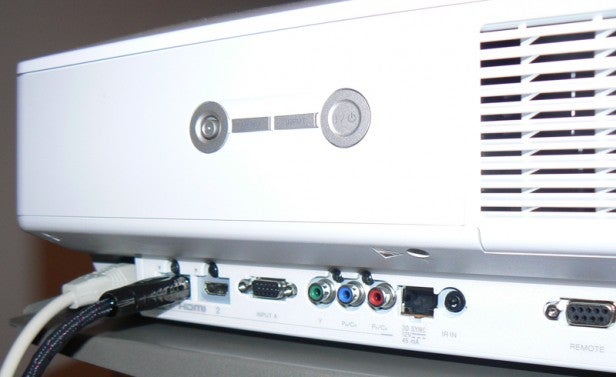 The HW55ES’s images are produced using Sony’s LCOS-derived SXRD chipsets, with their reputation for delivering extremely narrow inter-pixel gaps and fast response times for enhanced motion. SXRD has also become increasingly good at serving up strong contrast levels recently, with the HW55ES claiming an extremely promising contrast ratio of 120,000:1. Though it must be stressed that this figure is achieved using a dynamic iris system that adjusts the light emerging from the lens to suit the brightness of the content being shown; it’s not a native contrast figure like those you get with JVC’s D-ILA projectors.

The projector’s maximum brightness, meanwhile, is rated at 1700 Lumens. This is comfortably enough to deliver punchy 2D pictures – especially in the blacked out room a ‘serious’ projector like this deserves to find itself in – though it remains to be seen if it’s also bright enough to help 3D look great.

While we’re (sort of) on the subject of 3D, it’s good to see the HW55ES keeping the dynamic lamp control system for 3D playback that made such a difference on last year’s HW50. This system essentially pulses the projector’s lamp in sync with the shuttering mechanism of Sony’s 3D glasses, to reduce crosstalk double ghosting noise. This didn’t achieve perfect results last time out, but it certainly improved the crosstalk situation compared with Sony’s first generation of 3D projectors (and TVs, actually).

Having mentioned last year’s HW50ES (wow, we’re on a continuity roll here), it’s worth reflecting for a moment on how the HW55ES improves on its predecessor’s specification. The 120,000:1 contrast ratio is up from 100,000:1 on the HW50, while the maximum brightness is almost 30% higher.

The last feature of the HW55ES aside from its extensive setup aides covered in the next section is its Reality Creation picture engine, designed to give improved upscaling of non-HD sources and enhanced colour saturations and detail resolution. 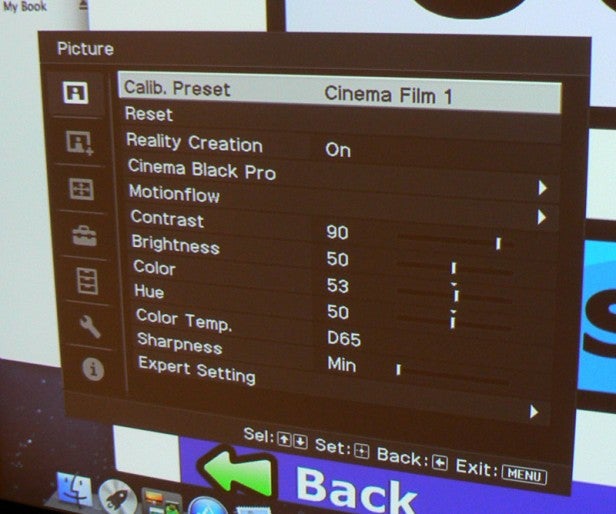 Getting the HW55ES’s pictures on your screen is about as easy as it could possibly be, thanks to the HW55ES’s 1.6x optical zoom and simple horizontal and vertical shift wheels.

As well as its useful physical set up tools, the HW55ES is well stocked with picture calibration aids. There’s Sony’s Real Colour Processing colour management system for a start, along with no less than 11 different gamma presets; multiple settings for the dynamic iris and contrast boosting tools the projector provides; a wide range of settings for a MotionFlow processing system aimed at reducing motion judder; and an electronic RGB panel alignment system that proved surprisingly useful in eking that nth degree of clarity out of the HW55ES’s pictures.

For the most part the HW55ES is very tolerant of different settings. Or to put it another way, it’s hard to make pictures look bad by choosing injudicious settings. So there are only two bits of advice we feel it necessary to impart here.

First, the Motionflow processing is generally best either left off or used in its innovative Film Projection mode, which does a surprisingly effective job of recreating the gently flickering approach of a typical cinema experience.

The other setting to take care with is the Reality Creation system. For while we tended to leave this system on you do need to be careful how high you set its Resolution and Noise Filtering elements. We kept both below 20, as anything higher tended to make pictures look noisy and unnatural.