The Epson TW9200 is a 3D-capable home cinema LCD projector positioned near the top of Epson’s 2014 projection range. The only model higher is the TW9200W, which adds a wireless HDMI connection system – and a white rather than black finish – to the TW9200’s spec. This is reflected in some impressive sounding numbers like 600,000:1 dynamic contrast and 2,400 Lumens brightness, and the end results show this is more than just hot air. 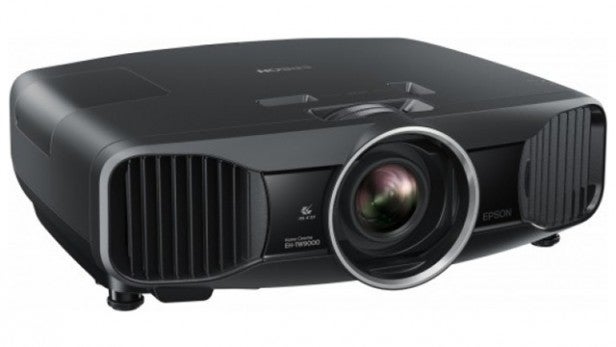 The Epson TW9200’s chassis treads an immaculate line between prettiness and seriousness. Its boldly angled back and grilled front sides, curved edges/corners and the glossy highlights to the predominantly matt black finish all combine together very prettily, while its substantial footprint, unusually large centrally mounted lens array and considerable heft all point to a projector that isn’t much interested in performance compromise.

The TW9200’s rear carries a pretty strong set of connections. The customary (for projectors) two HDMIs are both 3D capable, and they’re joined by a D-Sub PC input and a couple of system integration options in the shape of a 12V trigger port and an RS-232C port.

The 12V output can be used for firing up a motorised screen, a curtaining arrangement or even an external anamorphic lens system.  While this ability to work with anamorphic lenses is welcome, though, we can’t help but reflect on the usefulness of the ‘lens memory’ features sported by some rivals at the TW9200’s level of the market – most notably the JVC X35. Lens memory features let you set different zoom and focus settings for the built-in lens to suit different aspect ratios, providing a neat solution to one of home cinema’s trickiest problems for cinephiles who’ve got a ‘Cinemascope’ 21:9 projector screen.

Not that the TW9200 could have included a Lens Memory feature even if it
had wanted to, mind you, since it doesn’t have a motorised lens and
focus system.

The LCD optics at the TW9200’s heart deliver some seriously promising specs, headed up by a claimed contrast ratio of 600,000:1. This is an immense figure by LCD projector standards (it’s nearly twice as high as the figure on last year’s TW9100 equivalent Epson model), even if it depends on a dynamic iris to achieve rather than being a native figure like those quoted by JVC’s DLA projectors.

Also high is the TW9200’s claimed maximum brightness – or to use Epson’s preferred parlance, colour light output – of 2400 Lumens. The brightness/CLO distinction is one Epson is keen to make to reflect the fact that while the colour wheel system in rival DLP projectors leads to a reduced brightness figure when showing any colour other than pure white, the three-LCD arrangement in LCD projectors means you always get the same level of brightness no matter what colour combination is being shown.

The TW9200 is a 3D-capable projector, and ships with two pairs of active shutter glasses. These use RF transmission technology for a more stable connection with the projector’s built-in transmitter, while 3D picture quality should benefit from a 480Hz playback engine for reducing crosstalk ghosting.

The final things to mention in this section are the presence of a frame interpolation system for reducing/removing judder, and the fact that the TW9200 comes with the endorsement of the Imaging Science Foundation (ISF) for having enough calibration tools – as we’ll see in a moment – to be professionally calibrated by an ISF engineer.

The TW9200 is superbly adaptable to different room environments thanks to its huge 2.1x level of optical zoom and extensive vertical and horizontal image shifting range.

As noted earlier it’s perhaps a pity the zoom and focus have to be adjusted manually, especially as the adjustment rings around the lens are a bit stiff. But it still requires minimal work for even the most inexperienced of users to get perfectly sized, straight-edged images from the TW9200 correctly positioned on their screen.

The TW9200 is more intimidating when you open up its onscreen menus – though only because it’s got so many features to play with. Among the most important of the options available are a decent colour management system; gamma adjustment; white balance calibration; normal, high-speed and off settings for a contrast-boosting dynamic iris; eco and normal lamp modes; and Fine and Fast options for the projector’s processing.

There are a series of themed picture presets too, though unfortunately these don’t include a mode that would optimise settings for console or PC gamers. This seems an odd omission for a brand that has other projectors in its range specially designed for gaming.

There are a few settings you need to treat with care. For instance, if you activate the dynamic iris you’ll find that it causes a slight rumbling sound to emerge from the projector that could distract you from time to time – especially if a scene contains stark dark and light contrasts, and/or you’re sat quite near to the projector. 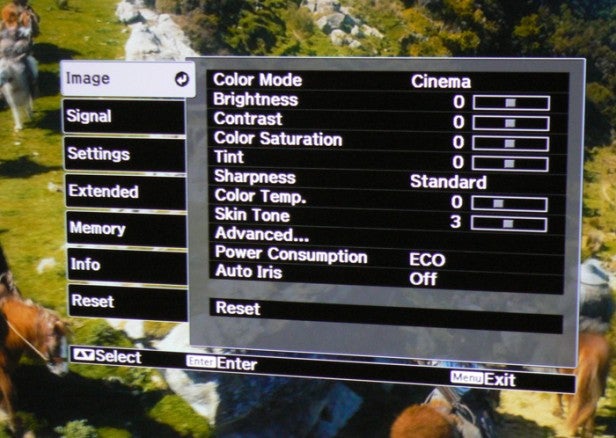 Also from a running noise perspective you might find you need to stick with the Eco lamp setting, for while the projector hardly exhibits any fan noise in this mode it can become quite whirry if you choose the projector’s higher-brightness Normal lamp mode instead.

These two noise-related limitations mean you likely won’t realistically get close to the TW9200’s 2400 maximum brightness – sorry, colour light output – figure unless you can enclose the projector’s running noise somehow. Just as well, then, that we could probably normally choose not to use either the dynamic iris or highest lamp output anyway. At least when watching a film ‘seriously’, in a darkened room.

There’s another issue with the Normal lamp mode too, namely that it causes a surprisingly severe colour shift, making reds look over-dominant and the palette in general look over-ripe. You can calm things down via the colour management tools, but it’s hard to understand why just upping the lamp intensity should make such a difference to the Eco lamp setting’s colour tone.

The TW9200’s Frame Interpolation system, meanwhile, is effective enough in its workings, in that it can reduce judder without causing many unpleasant side effects. However, we’d question whether you really need to use it given that the projector handles motion very well even in its ‘native’ state.