The W2000 is a sub-£800 home cinema projector that uses single-chip DLP technology. It sports a living room friendly design and an unusually powerful built-in speaker system, though its main claim to fame is its CinematicColour Technology. The combination of hardware and software techniques aims to deliver a precise rendering of the Rec 709 global HDTV colour standard.

The W2000 marks quite an aesthetic departure from BenQ’s usual look. For starters it’s gone all bling, fitting the front edge with a goldy champagne colour. I’m not convinced the gold will be to everyone’s tastes, but it does make the W2000 distinctive, and underlines the fact the W2000 is designed to look good in a living room. 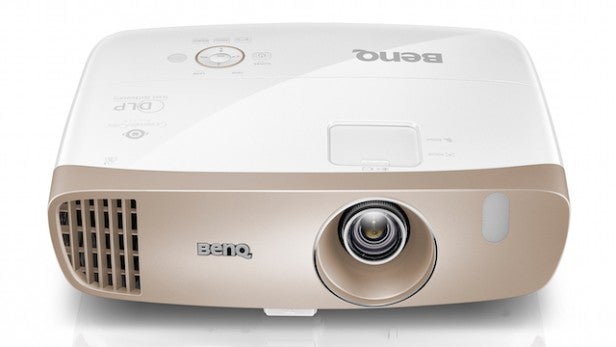 Connections are housed on the W2000’s rear, and comprise a pair of HDMIs, a D-Sub PC port, an RS-232 port, a component video input, a 12V trigger output (for, say, automatically powering up a motorised screen), a 3.5mm audio loopthrough, and both standard and mini USB ports. You also can buy an optional Wireless Full HD Kit (WDP01) that lets you ‘throw’ images to the projector without the need for the usual long cable run.

The HDMIs can handle the MHL protocols for playing content from your mobile phone while the USBs can be used to power the optional Wireless HD kit. Sadly you can’t play multimedia off USB drives into the W2000.

BenQ claims the DLP engine delivers a maximum brightness of 2000 ANSI Lumens and a promising contrast ratio of 15,000:1. As is normally the case with single-chip DLP projectors, colour is delivered via a six-segment (RGBRGB), six-speed wheel. 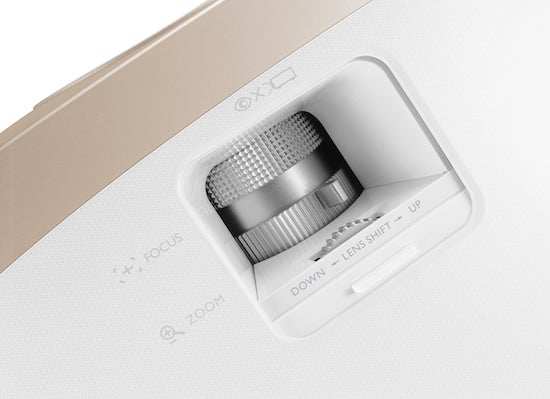 The new Rec.709-pursuing CinematicColour feature is slightly more interesting. It employs a new combination of colour wheel angles and coatings in a bid to achieve what BenQ says is the “optimum balance between a bigger colour space and optimised brightness”.

With the colour wheel element in place, another part of the CinematicColour system involves BenQ’s engineers doing a full, colour metered calibration on the projector – drawing on independent 3D colour control for all six primary and secondary colours – to arrive at the black, white and colour settings required to sail as close as possible to the desired Rec 709 standard.

I was pleased to see BenQ hasn’t taken a ‘one suite of settings suits all’ approach with the W2000 projector. BenQ claims there are no less than three colour adjustment stations in each W2000’s production line where proprietary BenQ colour adjustment software is used to ensure that each individual model nails the Rec 709 standard.

While the Rec709 standard is, in truth, starting to sound (and look!) a bit old school now that we’re beginning to see HDR content arriving, the fact remains that it is still the standard next to all Blu-ray and DVD content is created.

The lengths the W2000 has gone to in pursuit of Rec. 709 efforts will thus likely come as music to the ears of the sort of home cinema enthusiast BenQ is targetting with this specifically video-tuned model.

That said, while BenQ’s calibrations can optimise the performance of each projector based on its internal components, the only way a W2000’s settings can also take your individual room environment into account is with an on-site calibration. With this in mind BenQ has sought and obtained the endorsement of the Imaging Science Foundation (ISF) for the W2000, proving that it has enough set-up flexibility to support a pro install by a trained ISF calibration specialist.

The use of an all-glass, low-dispersion coated lens (not something commonly found in the sub-£1000 projection market) and the fact DLP systems tend to suffer less of a reduction in colour accuracy over their lifetime than rival projection platforms further aids the projector’s push for Rec 709 accuracy.

The W2000 supports 3D playback (though not surprisingly no free glasses are provided for free) and, as is now becoming standard for ‘convenience’ projectors, it’s fitted with a built-in speaker for those times where playing audio through an external speakers system is just too much of a hassle.

In fact, the W2000 takes its audio duties remarkably seriously for a projector. It combines 20W of audio output with a resonant sound chamber design, ‘MaxxAudio’ processing and algorithms apparently used by Hollywood studios to boost the perceived bass and treble range.

When it comes to physically siting your W2000, it does more than most to help out. The lens features a respectable 1.3x level of zoom for starters (accessed through a slide back panel on the projector’s top edge), plus a wheel sited above the zoom/focus rings enables a little optical vertical image shifting. 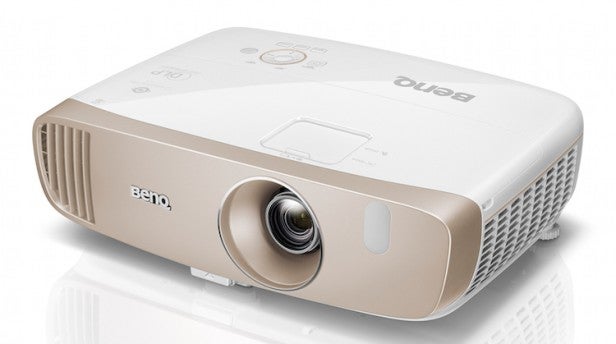 The range of shifting is limited, but then it’s very unusual to find any vertical image shift at all on a sub-£1,000 projector.

There are a couple of screw-down legs on the projector’s rear corners to help you get the projector level too, as well as a drop-down leg under the centre of the front edge should you need some upward angling to get the image onto a relatively high screen.

The projector’s menus are stuffed full of picture calibration tools, including a range of gamma settings, full colour management options, and, unusually, three different settings for the projector’s lamp output: Normal (bright), Eco (less bright), and Smart Eco (which automatically adjusts the light output in response to the content of the images being watched).

The really key feature of the W2000’s set-up tools, though, is ironically one designed to take away the need for all the others: the Cinema (Rec. 709) picture preset.

This is the one that benefits from all the aforementioned BenQ pre-shipping calibration efforts, and it does indeed deliver a startlingly engaging, accurate-looking picture right out of the box.

Aside from potentially having to adjust things to suit your room we did, it must be said, find pictures benefited in terms of more shadow detail from nudging up both the brightness and contrast a little and shifting the gamma setting down to 2.1 from its default 2.2. But that doesn’t stop the Cinema preset on the W2000 being arguably the best picture preset we’ve seen at this level of the market.